Ready for a Brand New Beat

Back in 2006, the Quaker Apartments at 30 East Philadelphia Street was one of the places Chisel and I stopped to check out really quick. It looked recently vacated, or like it had just started undergoing renovations, but the money ran out. It was in excellent shape back then, and now that I regularly visit someone who lives in the neighborhood I've gotten to see the downward descent in its condition.

It sits near the terminus of the proposed "M-1" light rail line that is being constructed even as I type, meaning that properties in this area are theoretically about to enjoy a surge in demand. Hopefully that will bring some life back to this old place.

It looked like some new windows had just been put in:

The units in this building seemed spacious and featured nice sun rooms.

According to my colleague Benjamin Gravel the Quaker Apartments was built in 1922, and designed by Maurice H. Finkel.

During the 1967 Riot this area was near the heart of the disturbance, and one of the most devastated by fire. Entire blocks of West Philadelphia Street were leveled, and I'm sure that during that hellacious week this building was awash in smoke and the sounds of chaos.

Time to check out the roof. 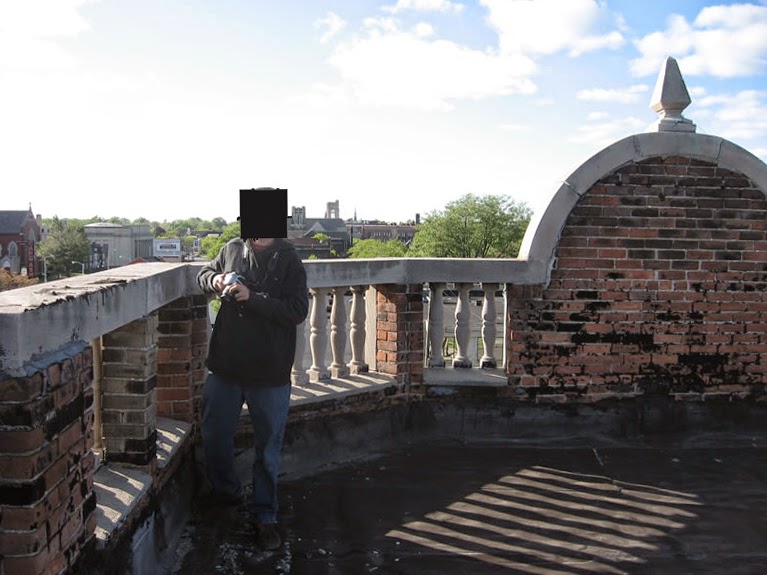 New Center is not far off, and the Hotel Seward can be seen:

As you can see there are a couple shiny new buckets of roof tar sitting around like someone was in the process of fixing this place up:

A view across the front facade, looking down West Philadelphia Street:

The church across the street is the Woodward Avenue Presbyterian Church, which I looked at in a different post. This photo of it was taken well before anyone had gotten inside to explore it however:

I just remembered a funny thing that happened on our way out of this building. There were two stunned women sitting there out front, who we had just interrupted from taking the first pull off of their freshly-lit crack pipe. One of them asked me "Is you the po-leece?"

When I answered "no," she continued to take her hit, and I think Chisel may have made some comment that made them both laugh. As I recall we stood there for a moment joking with these fine ladies before moving on. Those "emerging from an abandoned building" moments often make for great spontaneous conversation with people you'd normally never have the chance to talk to candidly.

In that general area of the city we also explored the St. Rita Apartments--or tried to--before we discovered it wasn't quite abandoned yet:

Local architecture guru Ben Gravel says that it was designed by architect Harry C. Stevens, and built in 1916. We found the back door to be wide open, so we went in.

When we got up to the second floor landing however, we found an interesting, sophisticated barricade, and could go no further. We pulled on the door, but someone had it rigged pretty good on the opposite side.

Then we heard some strange muffled conversation behind the door, and the sound of someone stealthily taking apart their makeshift barricade. Not getting an easy feeling from this, I decided that some things were better left un-tampered-with, and we made our way out rather than encounter whatever shady doings were on the other side.

Both 30 E. Philadelphia and the St. Rita were on Mayor Kwame Kilpatrick's c.2008 list of 50 buildings that needed to be demolished. Only a few on that list were ever actually torn down. At the moment both seem to be headed toward renovation. As of December 2016, the building was put up for sale, asking $300,000. As of October 2017, it was announced that the building would be converted into apartments for homeless veterans.