With the Detroit Public Library system celebrating its 150th birthday (in 2015), I figure that it's time for a little tribute to one of the fallen and forgotten branches. Since I'm such a bookworm and since I spend so much time in libraries in Detroit, I always take a special excitement and a certain wistfulness in exploring abandoned ones. 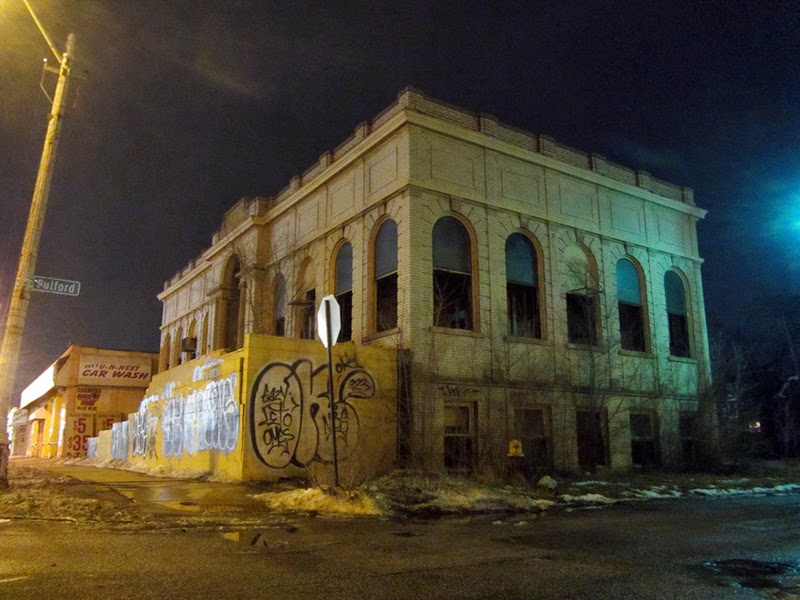 The Hosmer Branch Library on Gratiot Avenue was a nifty building I had eyed while passing by for a long time. I always assumed that the interior would be gutted and uninteresting, so I never stopped to check it out. 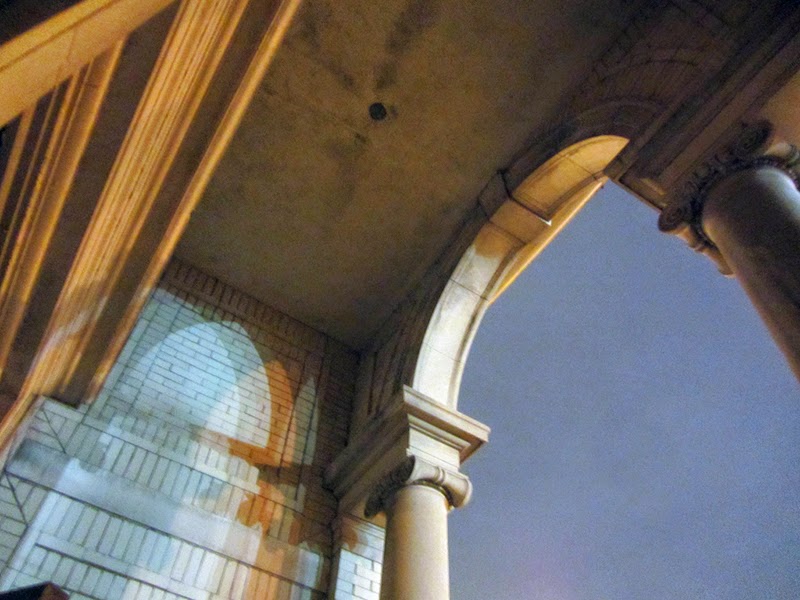 It wasn't until some friends took me there one night when we were bored that I realized just how cool its interior actually was. 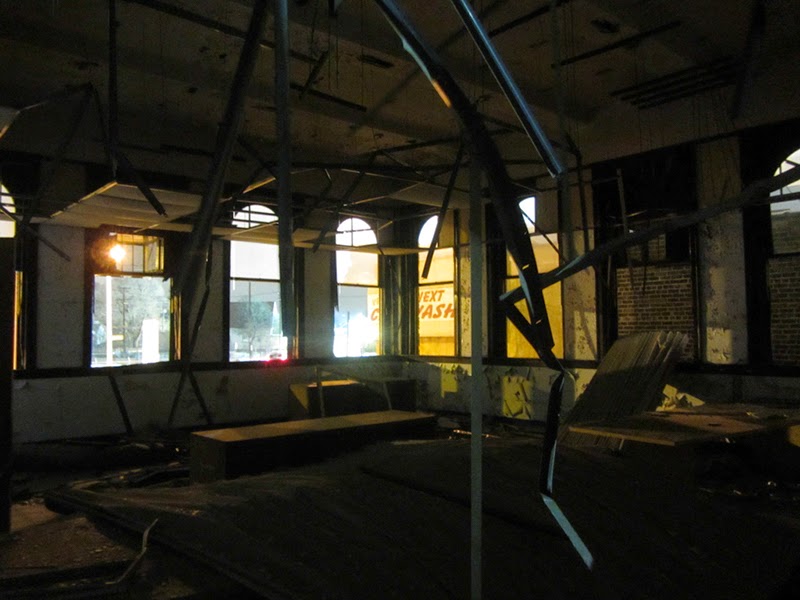 It was basically one big open space, completely encircled by those arched windows all the way around, and in the central aisle stood a double row of tall Ionic columns, with a skylight in the middle. 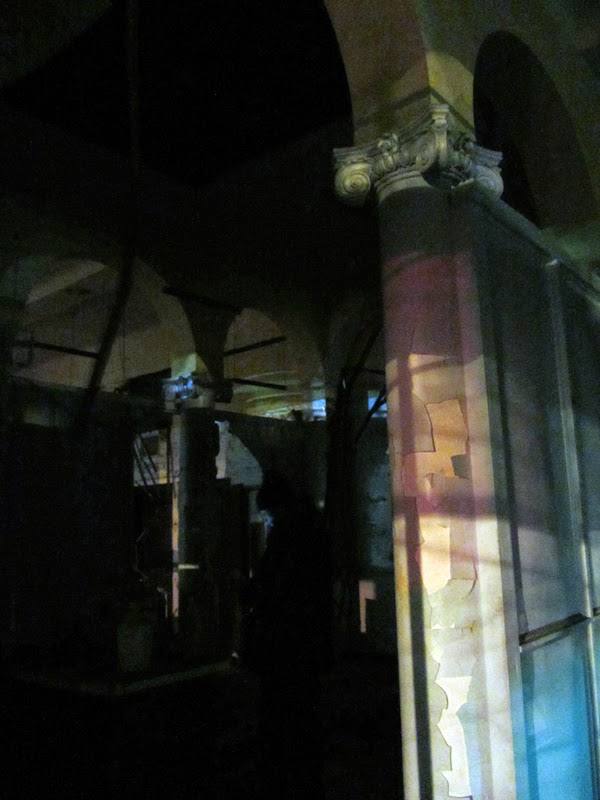 Granted, it was pretty difficult to get shots in these close quarters at night without a tripod, but I managed to manage okay. A return trip in the daylight was nonetheless an inevitability in order to do this place justice, but for now the eerie spills and moody tones of nighttime ambient light would do just fine. 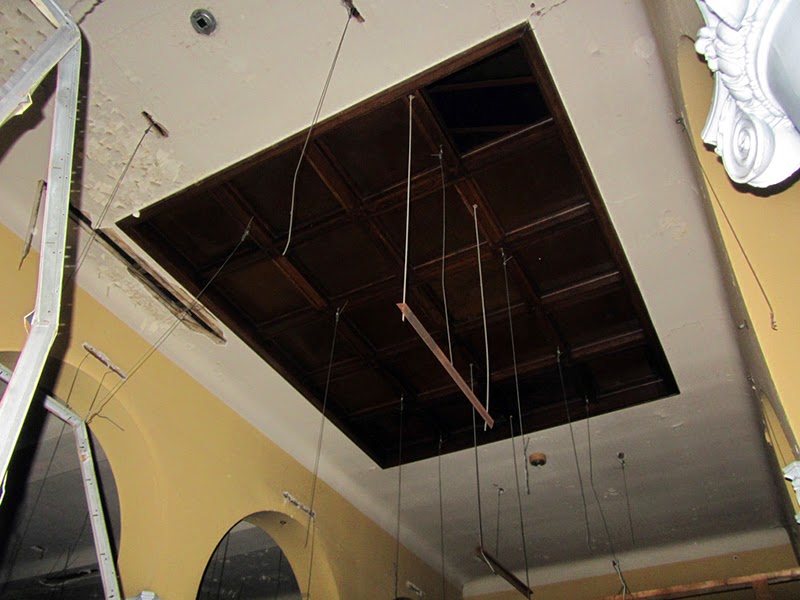 A view out across quiet, lonely Gratiot Avenue at this late hour, combined with a cheap beer buzz and grimy arc sodium street light was just what the doctor ordered. 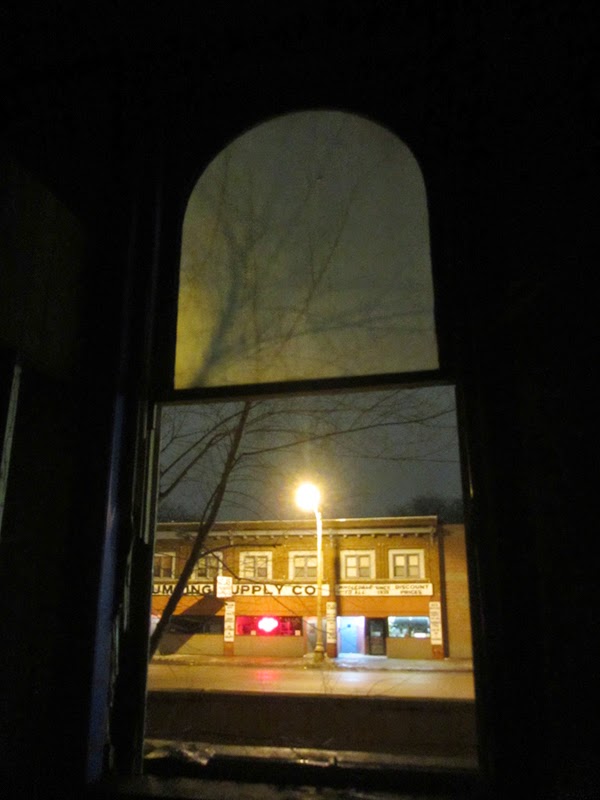 According to historian Clarence Burton the Hosmer Branch Library first opened in the year 1900, inside of Harris High School on Pulford Avenue, but it was moved to 887 Gratiot Avenue in 1903.

It was not until January 7th, 1911 however that this building was completed and would become the Hosmer Branch's permanent home, serving the McDougall-Hunt neighborhood at 1030 Gratiot (renumbered to 3506 Gratiot). The Mark Twain Branch Library stood a couple miles further up Gratiot, at Burns, and of course the Skillman Branch--also on Gratiot--still operates downtown at Library Street. 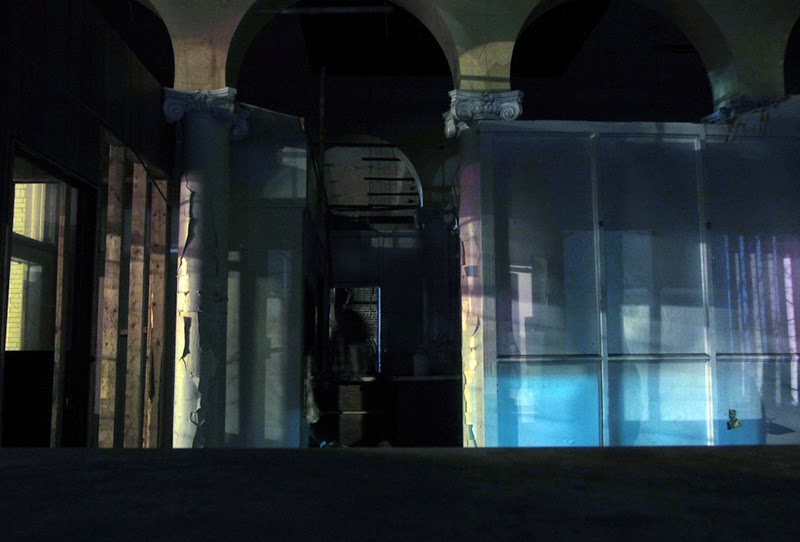 The interior of this place looks like it suffered from some ill-conceived remodeling, with a lot of dropped ceilings and flimsy temporary walls sectioning-off several offices. Thankfully a lot of them had already been destroyed, and would not obstruct my shots. 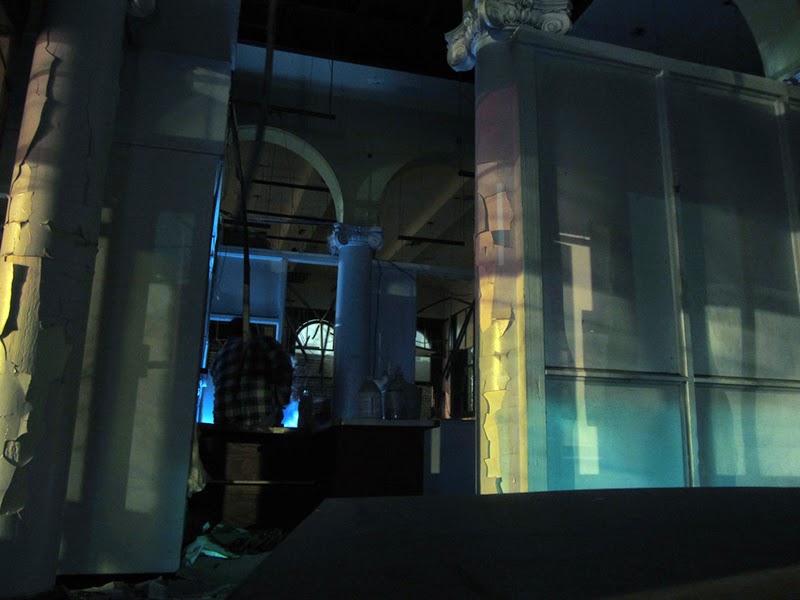 According to Detroit Public Library Branches, 1914, by Glen G. Mosher, this Italian Renaissance style structure was designed by local architect Louis Kamper. You may remember him from such better-known Detroit buildings as the Broderick Tower, Book Tower, Book-Cadillac Hotel, Fine Arts Building, Eddystone Hotel, Hotel Park Avenue, and many others.

Mosher also says that this library was constructed of Kittanning brick and Bedford stone, with red oak interior trim, at a cost of $24,500. 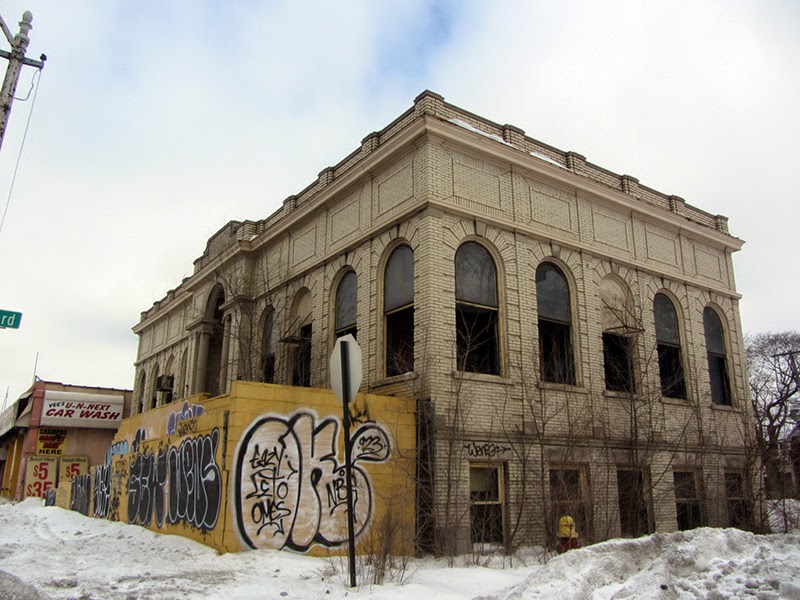 Mosher's record goes on to say that the main floor of the library was the "General Reading Room," and there was also a children's room, a reference room, staff room, and the librarian's office. Any books, stacks, or other library furniture that were once here are now long gone. 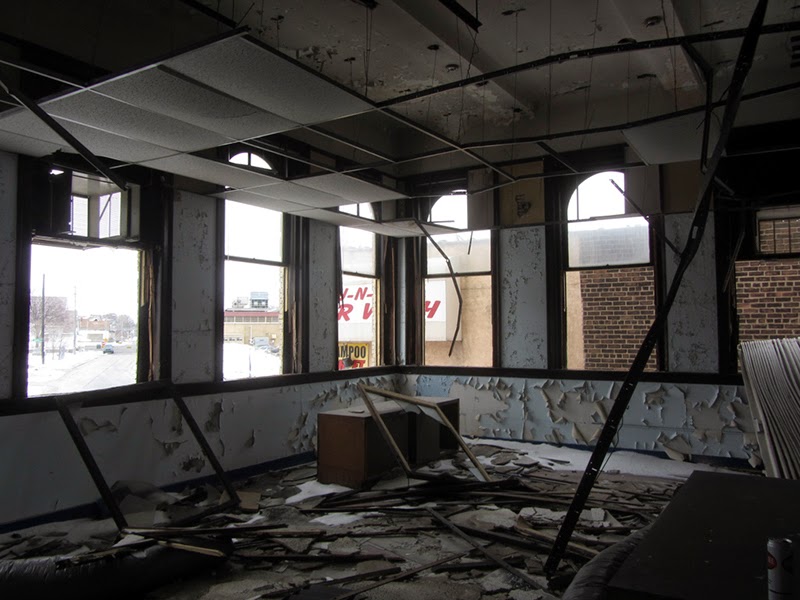 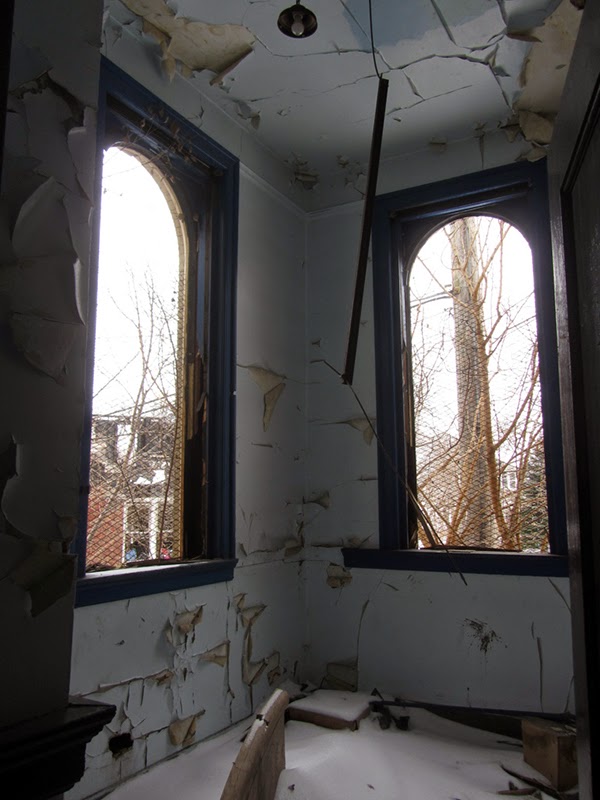 Having been in a lot of DPL branches both in-use and closed-down, I can say with authority that this must have been one of the coolest ones, back when it was pristine. 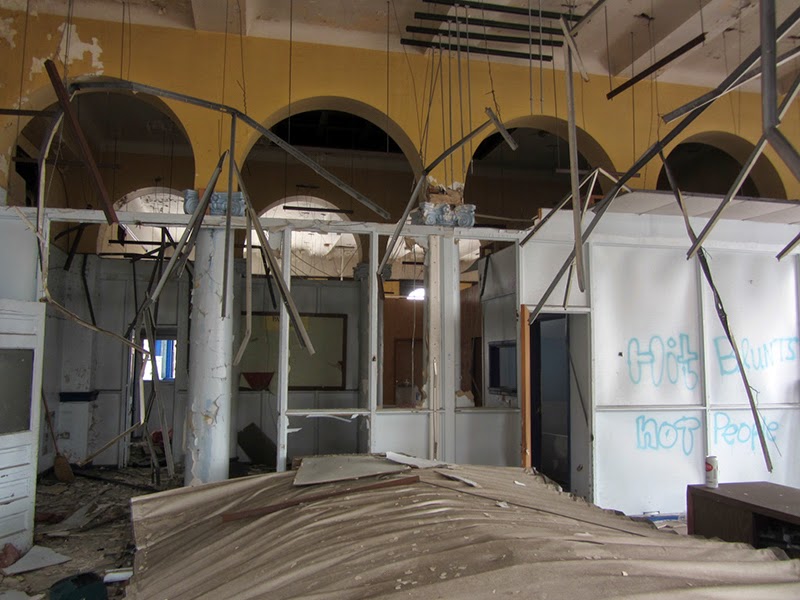 Via Google Books I came across an old periodical called Library Service, which seems to have been the Detroit Public Library system's internal newsletter. In several volumes of it I gleaned interesting little factoids, and mundane snippets of what life was like in the neighborhood libraries of Detroit in the early 20th century, particularly at the Hosmer Branch. 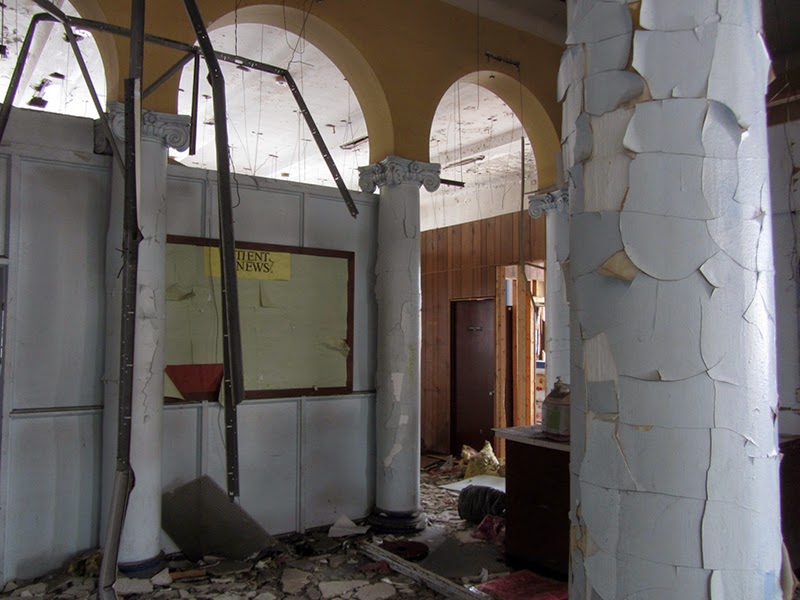 For instance, I learned that in January 1918 the telephone number to this library was Ridge 249, and that Wednesday was Neighborhood Night, where a speaker was scheduled to give a talk, and "all are invited to make use of the branch on this evening especially." 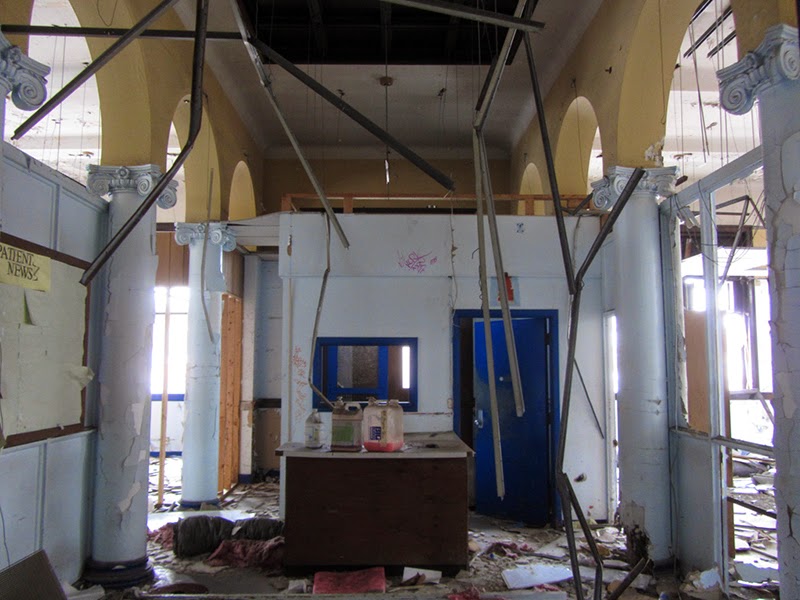 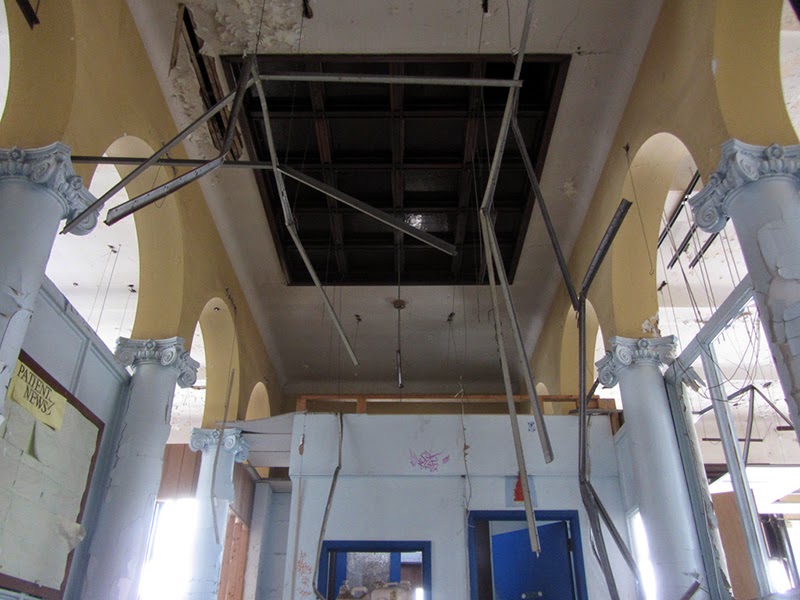 A November 1917 issue of Library Service tells of another neighborhood exhibition under the direction of the Recreation Commission. All patrons were urged to leave examples of handcraft for the exhibition, including "pottery, lace, embroidery, weaving, costumes, metal work, woodcarving, and exampled of work from the Colonial period of this country" were "earnestly requested."

Pictures on loan from the Museum of Art (predecessor of the DIA) were displayed, and more "interesting talks" were given. 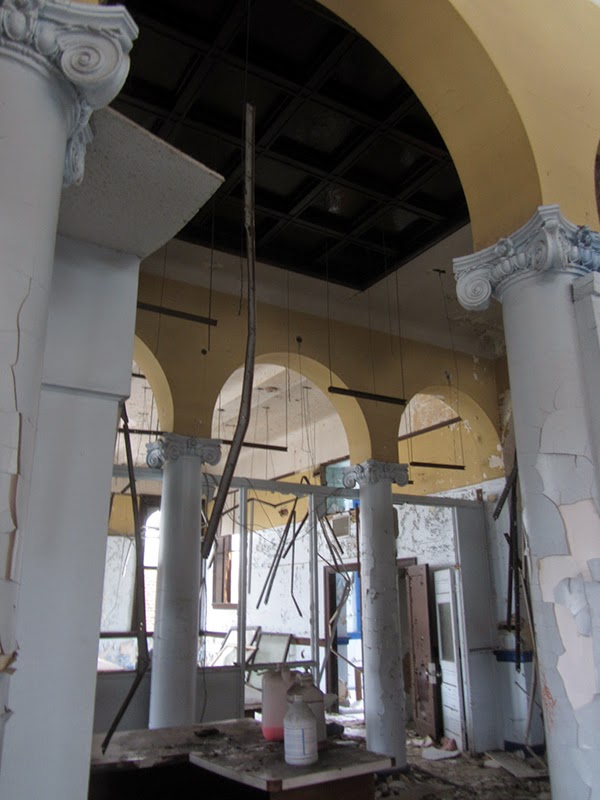 Beginning that March, the Recreation Commission was to hold "'sing-songs,' as the Tommies say," every Saturday at 7:30. In case you're wondering who "Tommies" were exactly, it's some WWI-era slang that is lost on modern ears; "Tommy" was the nickname that British foot soldiers referred to each other by, sort of like we have "G.I. Joe" I guess. 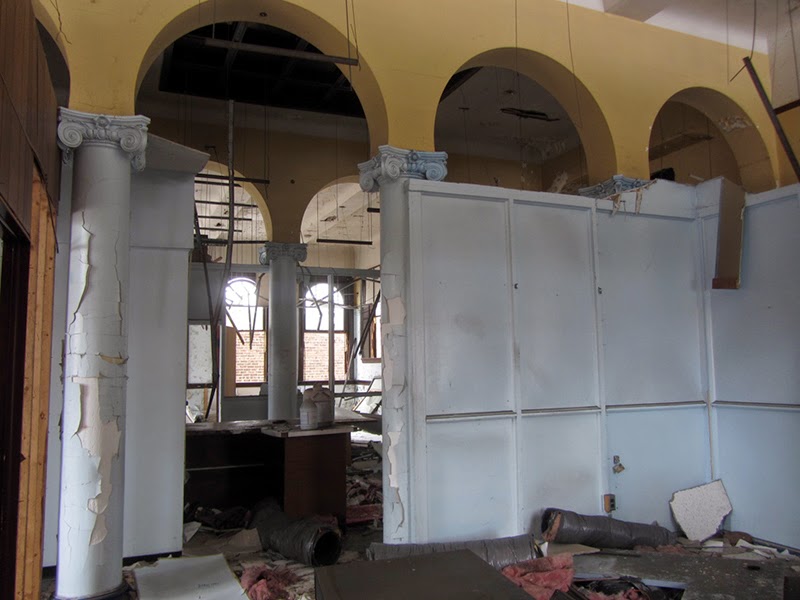 Speaking of World War I, another new service was introduced at the Hosmer Branch in November 1918, for soldiers of the Motor Transport Corps stationed at the nearby barracks on Bellevue Avenue. They wrote to the librarian of Hosmer, saying, "We wish we had a quiet place to go and write letters," and so the library set aside a room for them to do so. 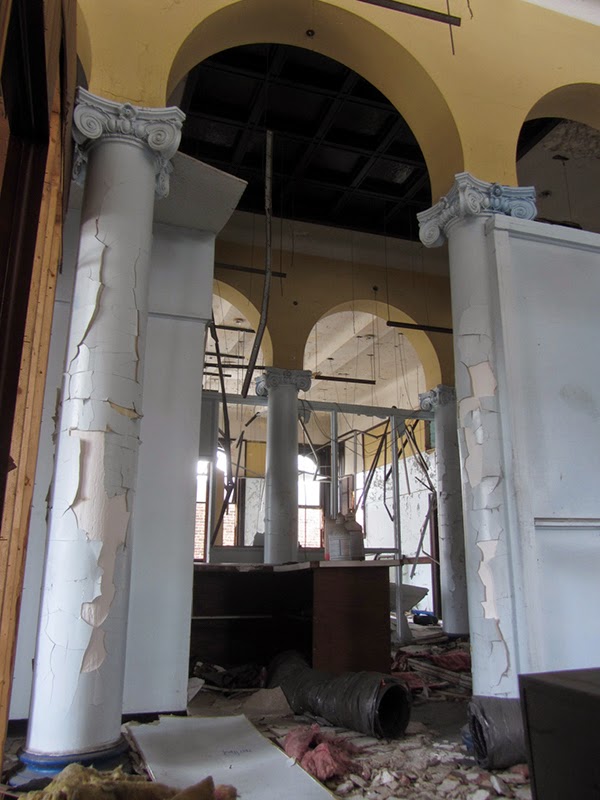 Okay, just a couple more photos of the arches and columns... 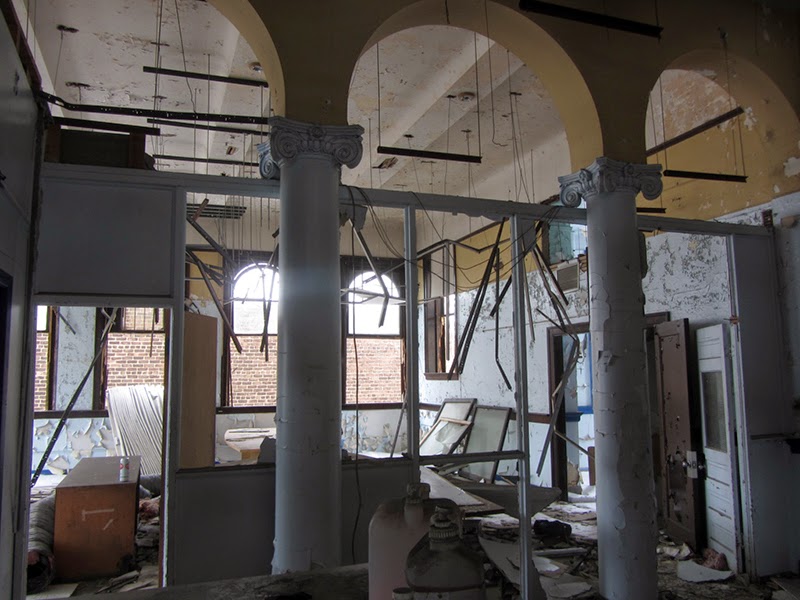 Through the doorway was the employees-only area: 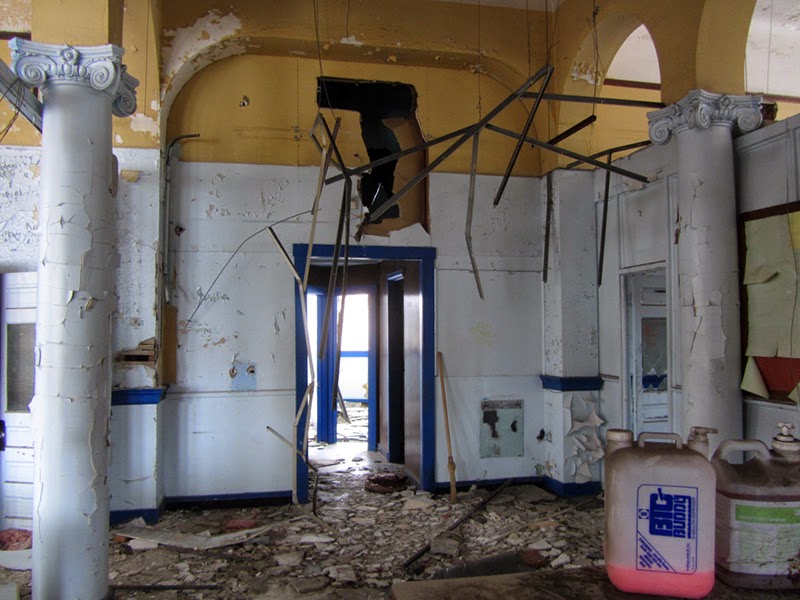 After I was able to tear myself away from the lobby area, I checked out the back offices. 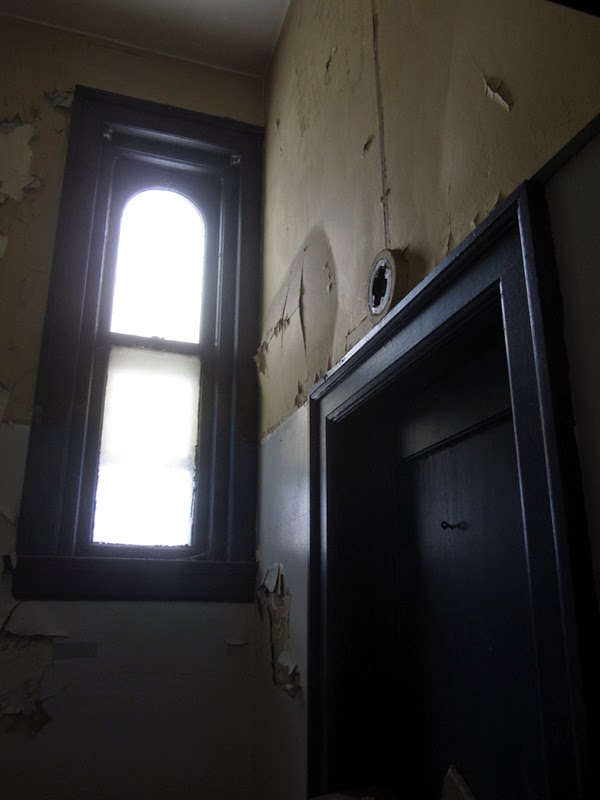 There had been a small fire in here at one point, since the walls of one room were blackened. No real damage to the building however. 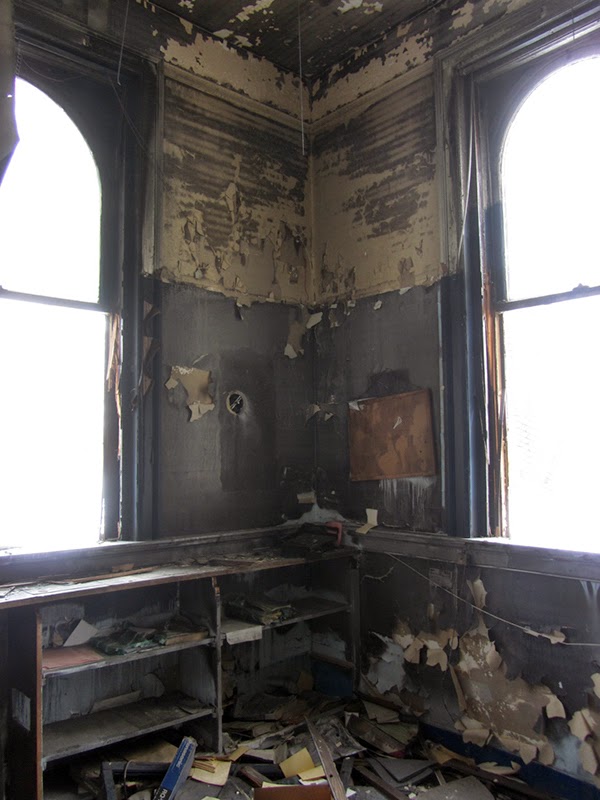 Some kind of old district map of the city: 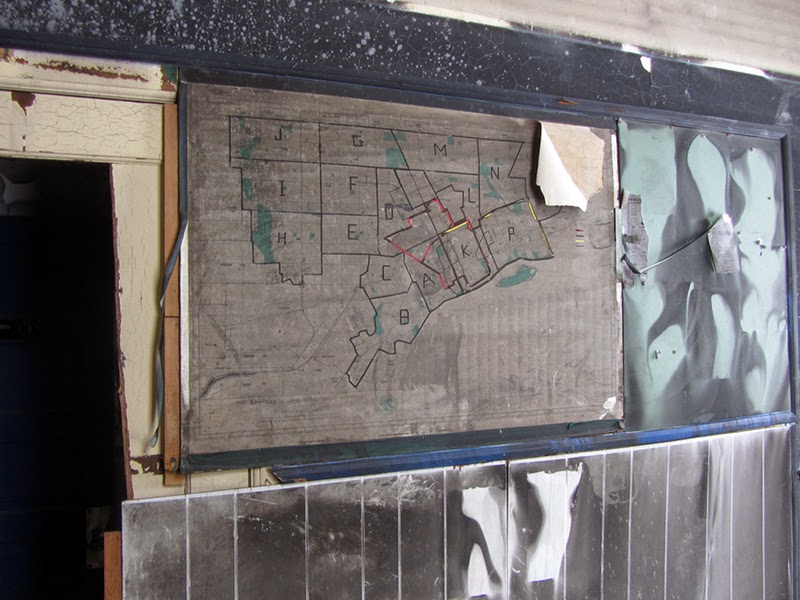 I tore away part of the blackened map, to reveal...another copy of the very same map underneath, without the district lines: 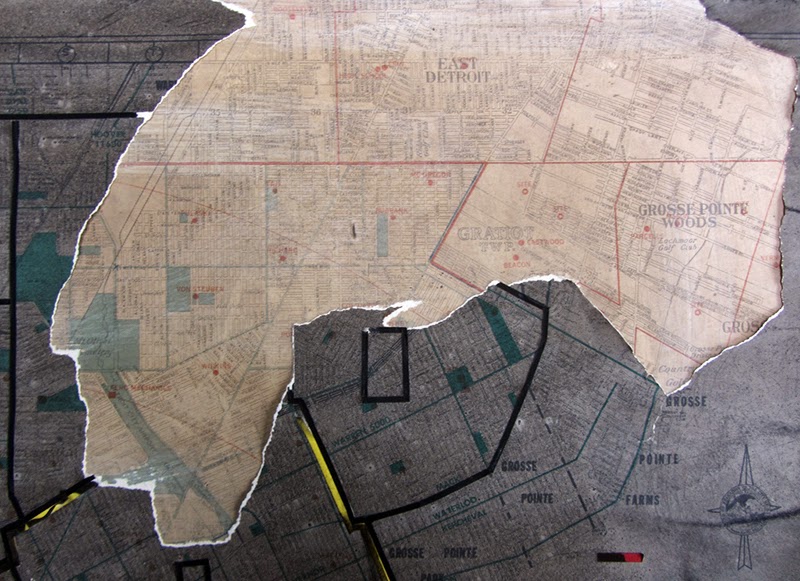 It was pretty old, since it still showed East Detroit and Gratiot Township. 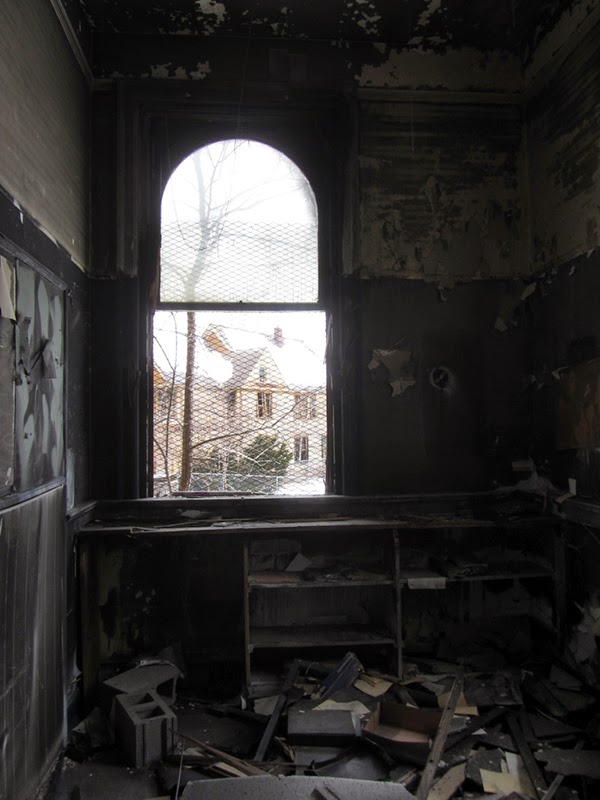 There was this strange rounded apse on the back of the building, which I presume contained more offices, but may have originally been one open area--perhaps the aforementioned children's room: 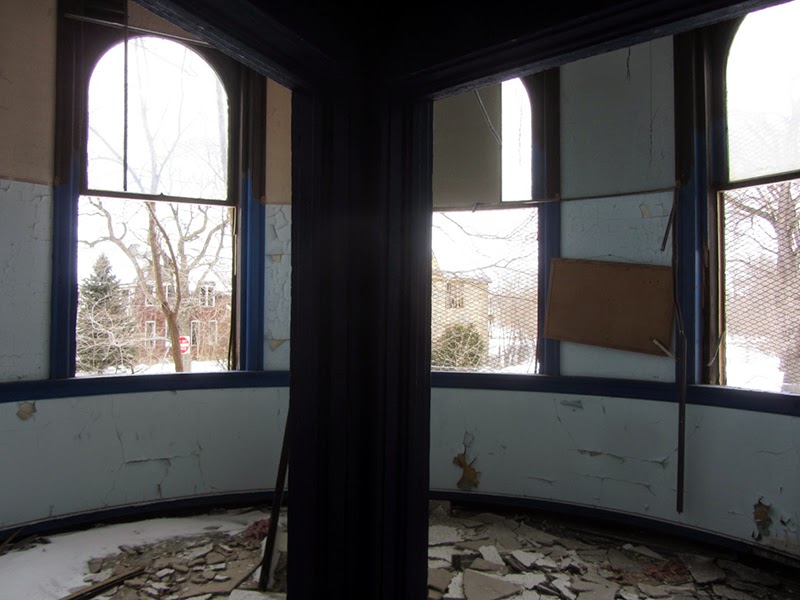 I also saw what looked like several small study rooms in the basement: 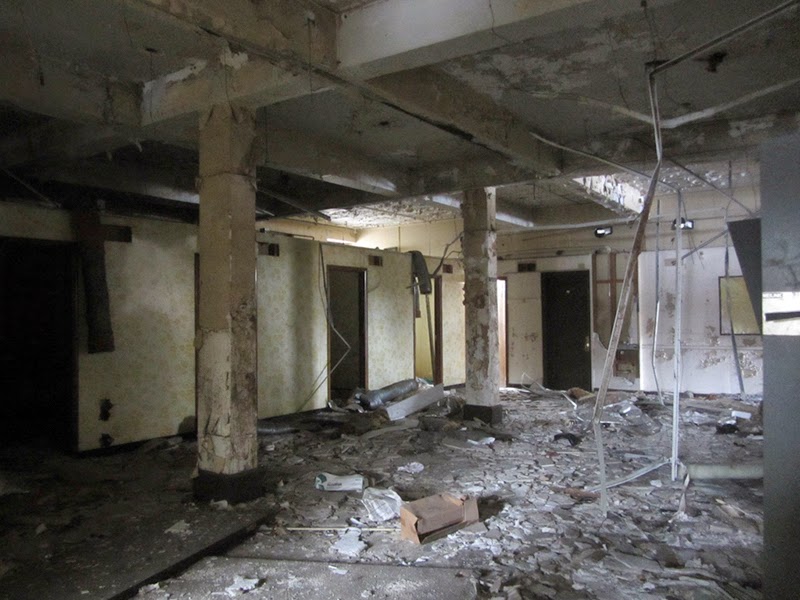 Then of course, the usual utilitarian areas: 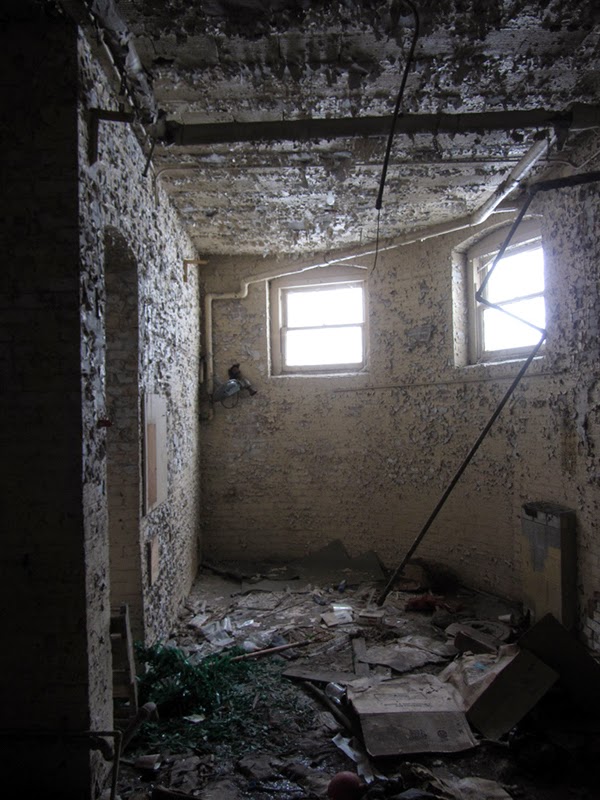 Out back I saw the apse in fuller detail: 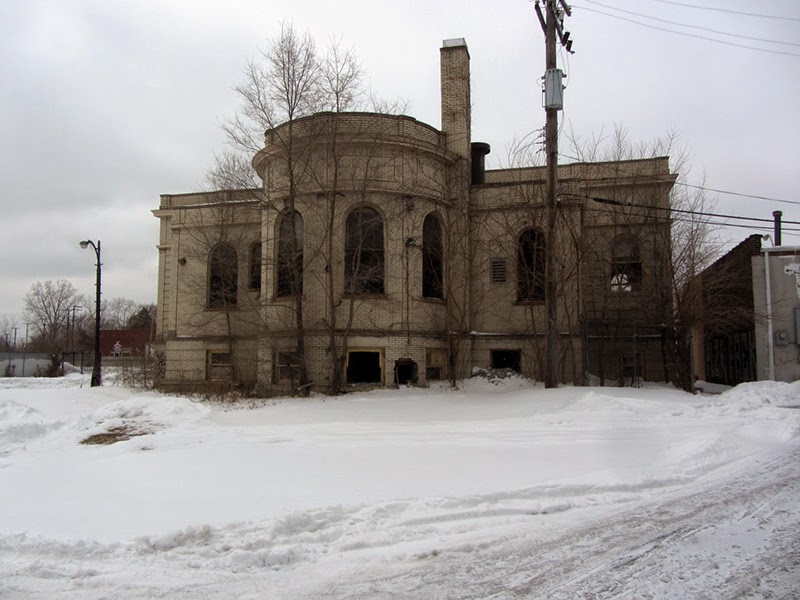 And then I proceeded to get my vehicle stuck in the snow for several minutes. An article in September 2016 states that this library was recently purchased for $35,000 by a small private entrepreneur who hopes to turn it into a bookstore (provided the city agrees to a zoning change). As of 2019 another fire has damaged the building, and it has apparently been seized by the Detroit Land Bank Authority.