Arenac was another of those counties that presented difficulty in finding abandoned things substantial enough to be worthy of investigation. When in doubt, always turn to bridges and barns. 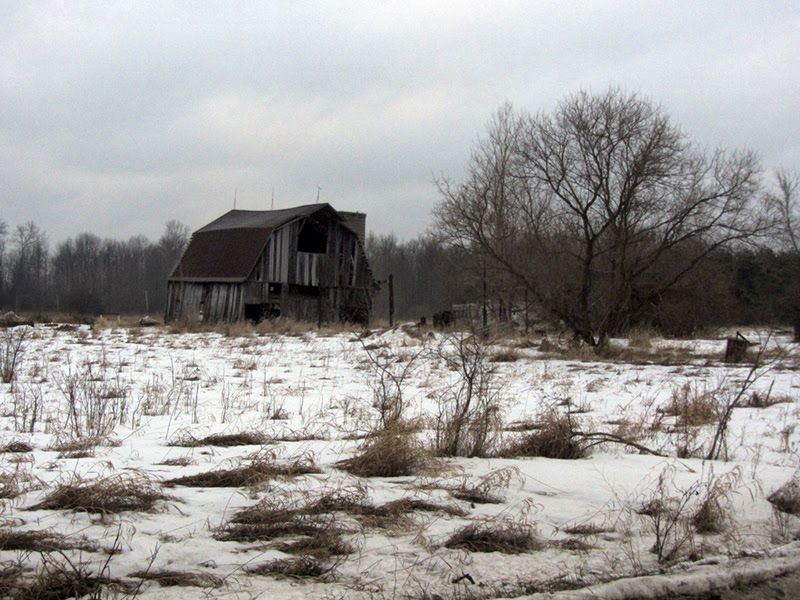 The first item I came to was the Hickory Island Road Bridge over the Rifle River. It wasn't totally abandoned, since snowmobilers were still using it, but its days of being maintained by MDOT and tax dollars were over. 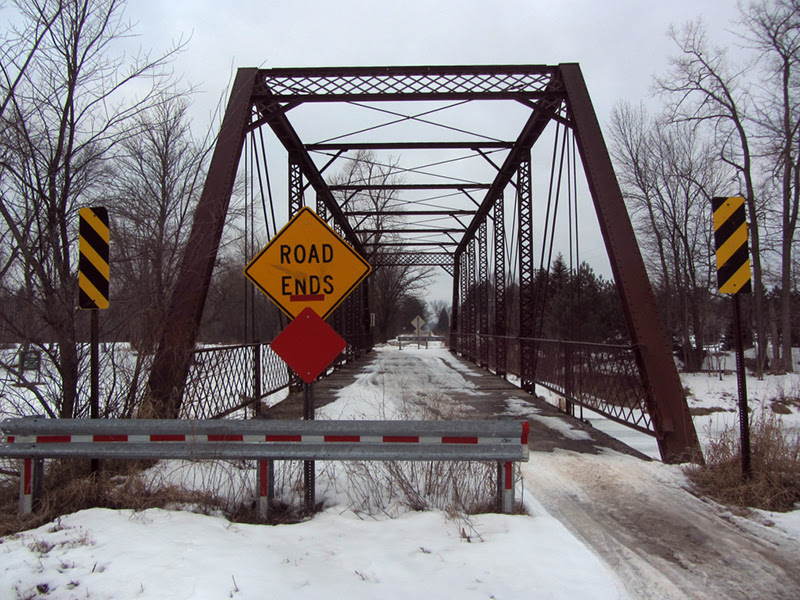 HistoricBridges.org lists it at 8/10 on their historic significance scale, which is higher than I would've expected it to be. Apparently its 128-foot length makes it "one of the longest pin-connected Pratt through trusses in the MDOT inventory." 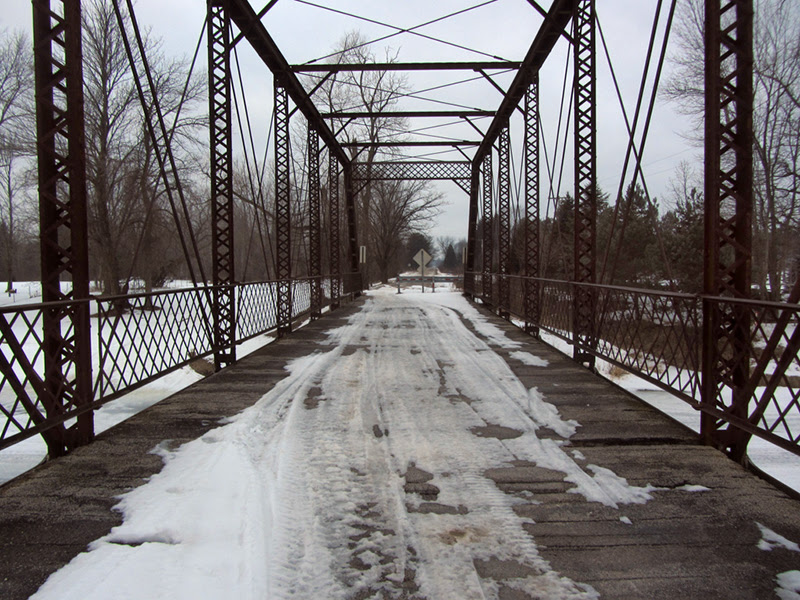 They also say that despite the fact that MDOT lists it as having been built in 1920 it probably dates to the 1890s or even the 1880s, judging by the old Carnegie stampings on the steel. It was most likely moved here in one piece in 1920 from some other site, perhaps in an urban location, judging by its style.

The Arenac County Clerk was noted on HistoricBridges as saying that he'd heard that a lumber company made a cut on the Rifle River once, and that the bridge was floated down the river to this spot that way. The only thing is that there are no cities that would have had such a bridge anywhere up the Rifle River, so the only way that theory holds water is if the bridge came by boat from somewhere like Saginaw and was floated up the river, not down. 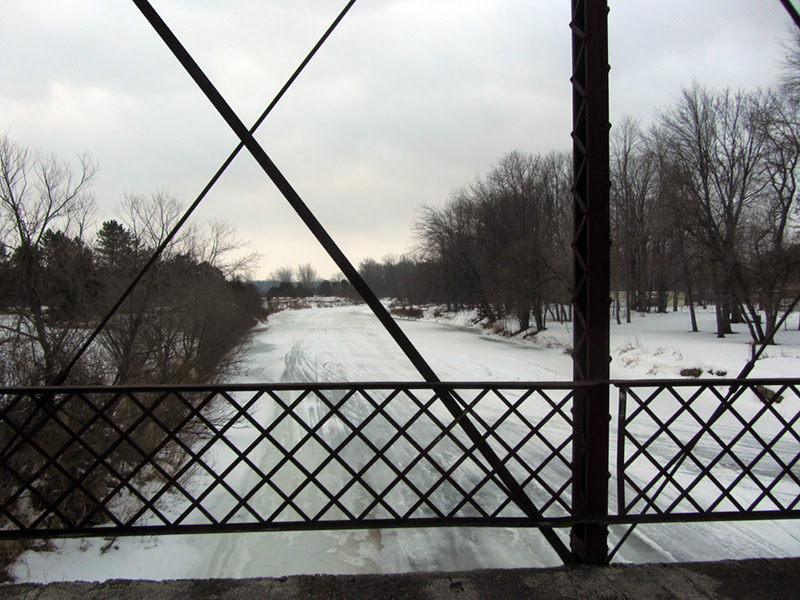 Today the Rifle River was frozen but rapidly thawing, as evidenced by the many dark spots forming on the snowmobile expressway below me: 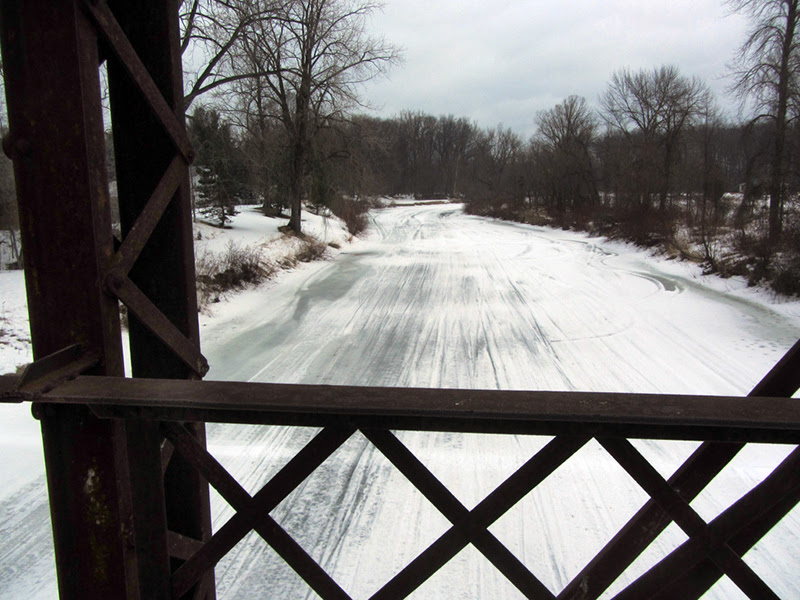 According to Michigan Ghost Towns of the Lower Peninsula by Roy L. Dodge, Arenac County was named by Henry Rowe Schoolcraft to mean "sandy place," from a creative combination of Latin and Algonquin (thanks, Henry). The soil was indeed sandy but that doesn't seem to have stopped any farmers from attempting agriculture here. 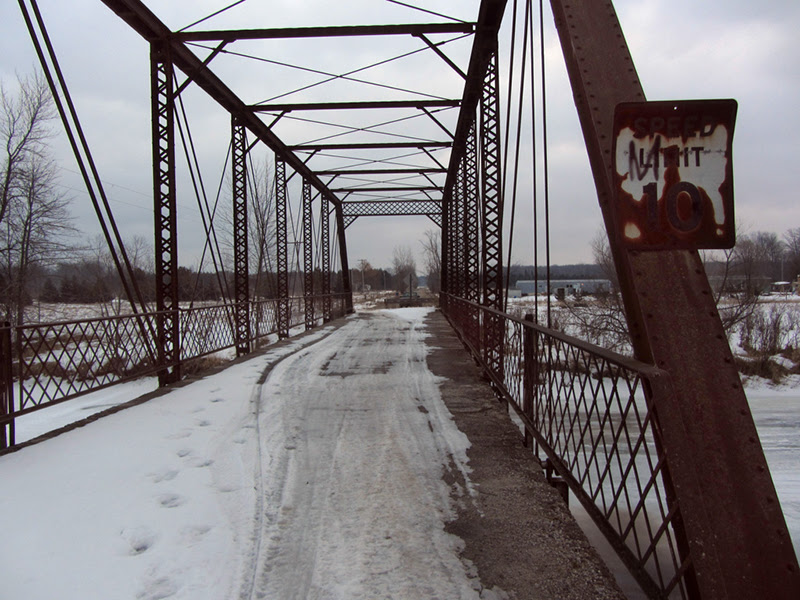 Oddly enough, although Arenac County was set off in 1831 it was combined with Bay County in 1847, and then re-set off again as its own county in 1883. The county's population is about 17,000 and its seat is at Standish. 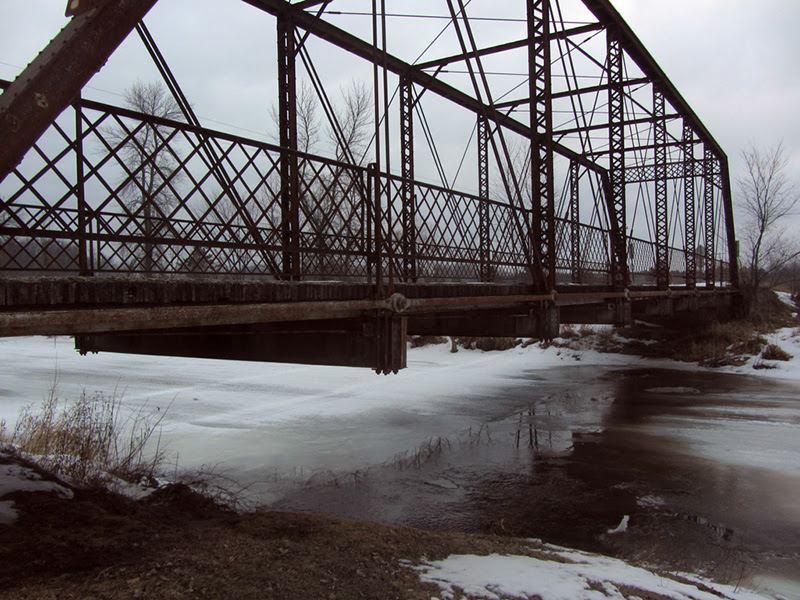 David M. Brown writes that there were once Indian villages and burial grounds along the Lake Huron shore of Arenac County, and that artifacts have been found at the Lalone Site dating to 5,000 years ago. 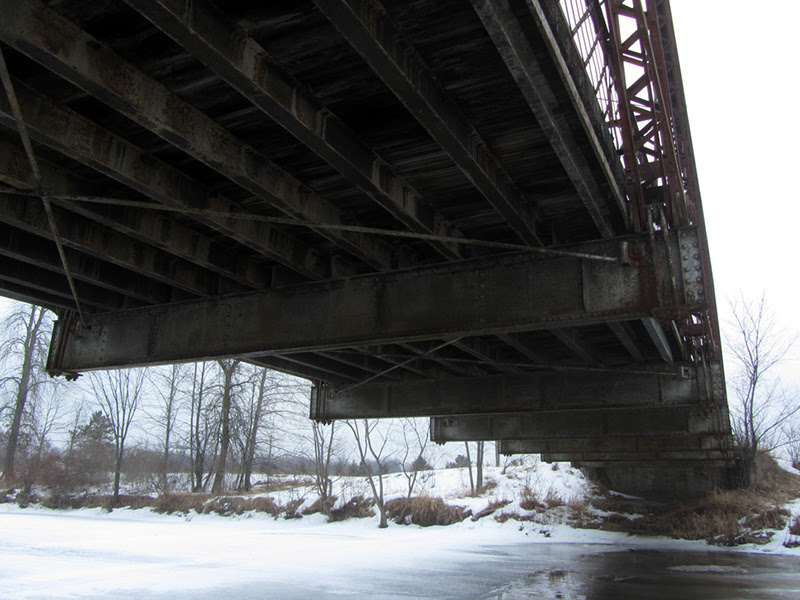 Some of that sandy soil, I presume, mixed-in with drifted ditch snow: 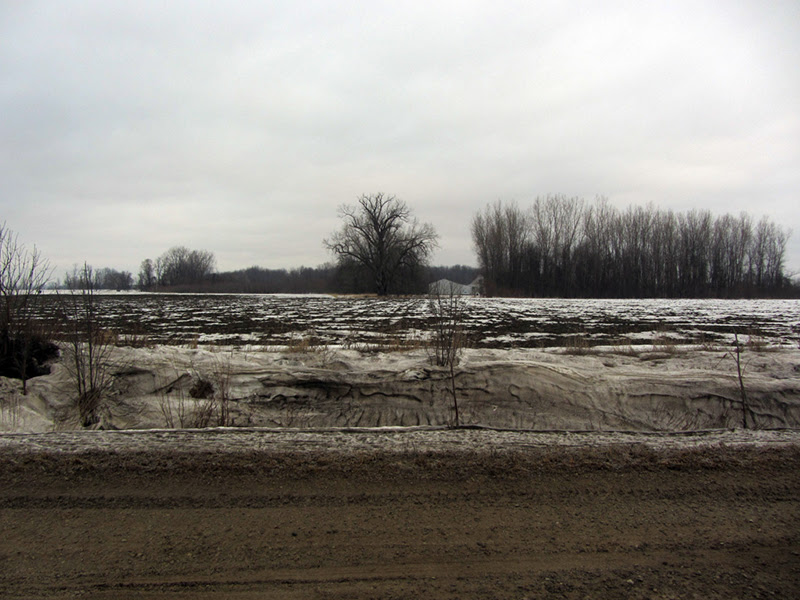 Another point of interest that I was looking for was the ghost town of Santiago. When I arrived at the intersection where this settlement used to be centered, I didn't see much. Not far away however was a graffitied-up old camelhump style bridge crossing the Silver Creek, and an abandoned farm: 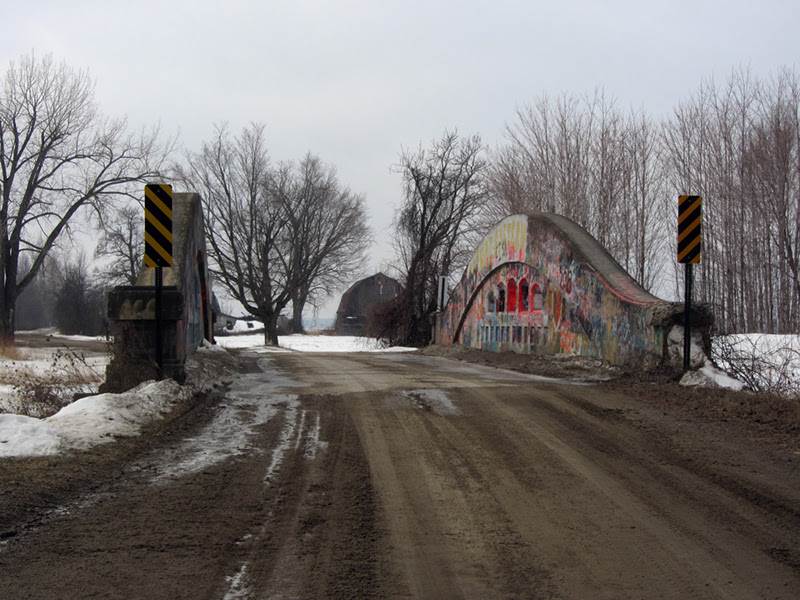 HistoricBridges.org rates the Court Street Bridge as 7/10 on their historic significance scale, saying that it is the last remaining camelback bridge in Arenac County. It is also one of the 90-foot ones, which I guess is the longest they made them.

Furthermore it is uncommon to see camelback bridges used along dirt roads, since they were intended for use with paved roads. HistoricBridges postulates however that because of this, the bridge was not subjected to winter road salting, which may have contributed to its long life. Reportedly this bridge was constructed in 1926 by Frank & Stiehl, of AuGres, Michigan. 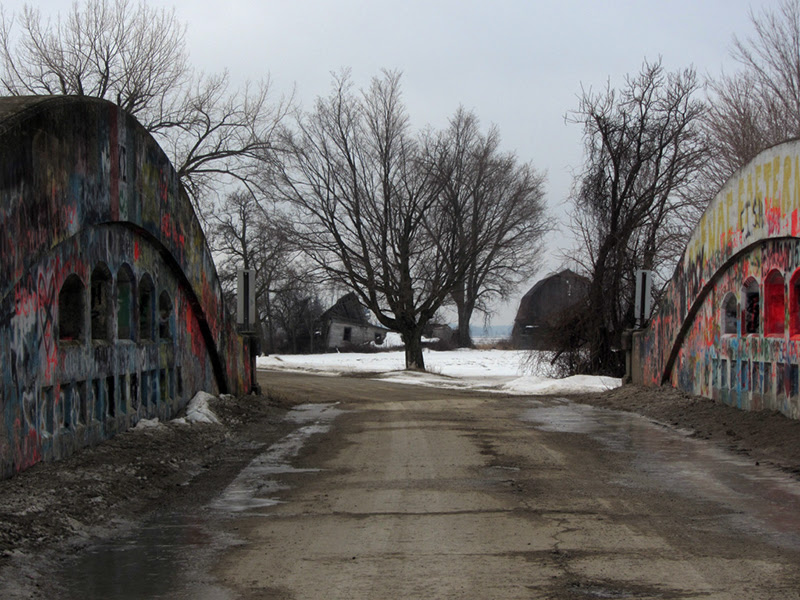 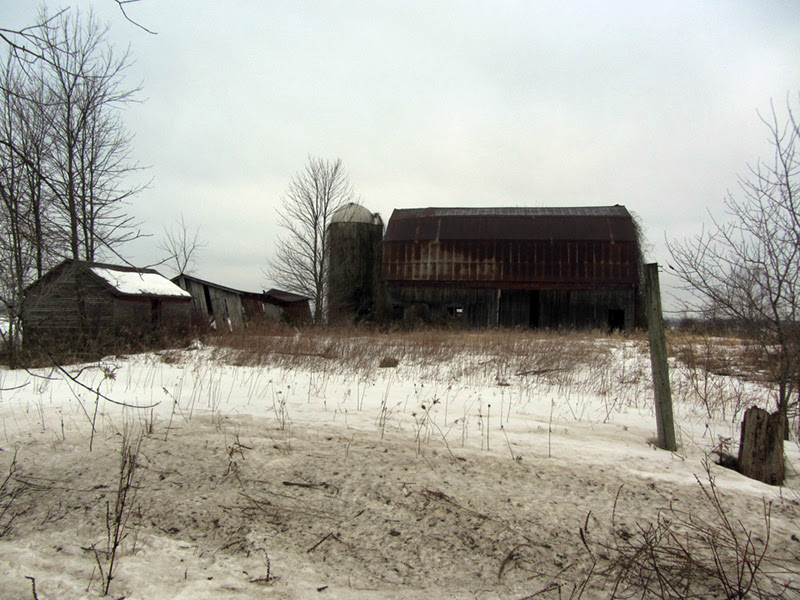 According to Dodge again, the ghost town of Santiago was settled in 1898 after the Battle of Santiago de Cuba, in the Spanish American War. A large lumber camp named "Moro Castle" was also located here, again, named after a Spanish fort in Cuba. 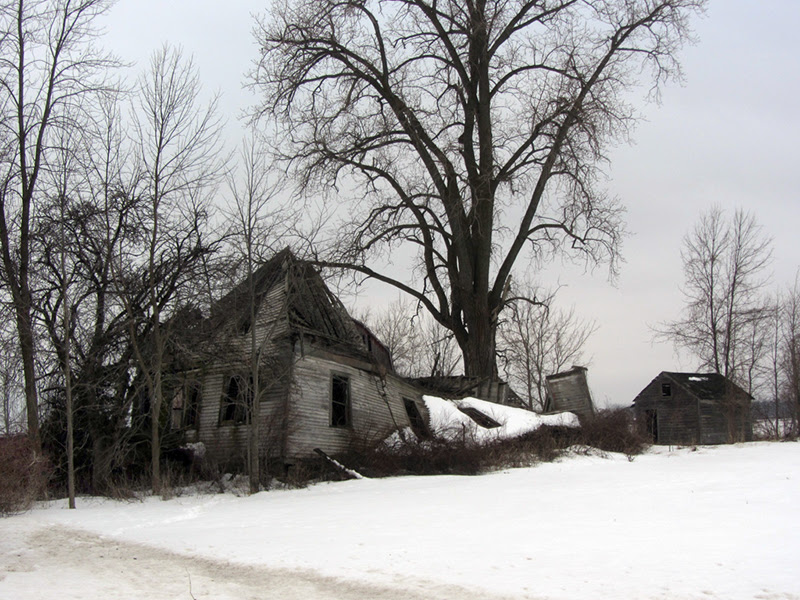 In 1905 the population was 250 and there was a hoop factory here as well as a few sawmills, and a brick factory. The post office closed in 1912, and by 1918 the population was down to 100; with fires ravaging the local stands of remaining timber, the village soon evaporated and was abandoned. 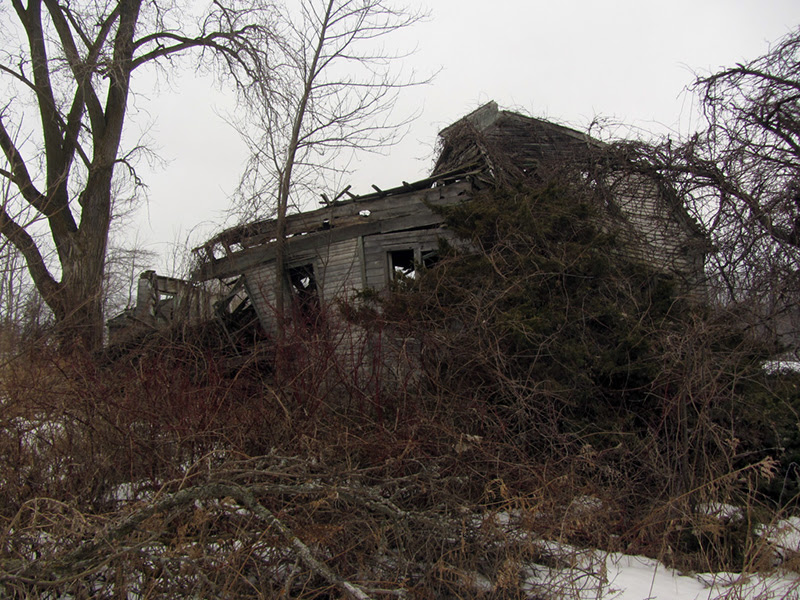 I would say that this house was easily built in the early 1900s or prior, so it is roughly concurrent with the lifespan of Santiago, though I'm not sure exactly whether it quite sat within what would've been considered village limits. Certainly, farming did not cease when Santiago died; in fact it flourished and continues to do so. 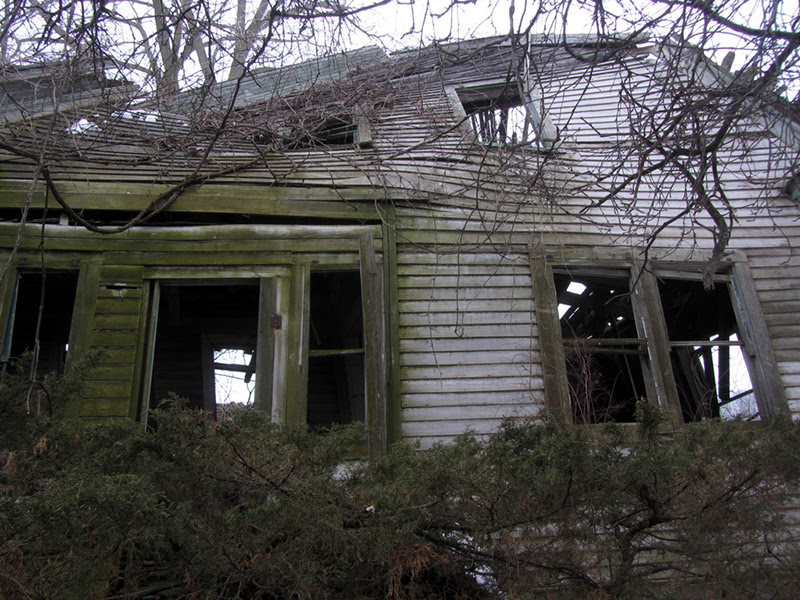 Out back was the old barn. I guess I have to admit I've always been biased against exploring barns because I considered them boring and not worth spending my time looking at when there were skyscrapers and giant factories elsewhere that needed investigating.

One thing I've noticed over the course of my almost 40 years of traveling however is that the classic iconic American barn that we always took for granted as a permanent and indelible fixture of the rural landscape is starting to disappear. 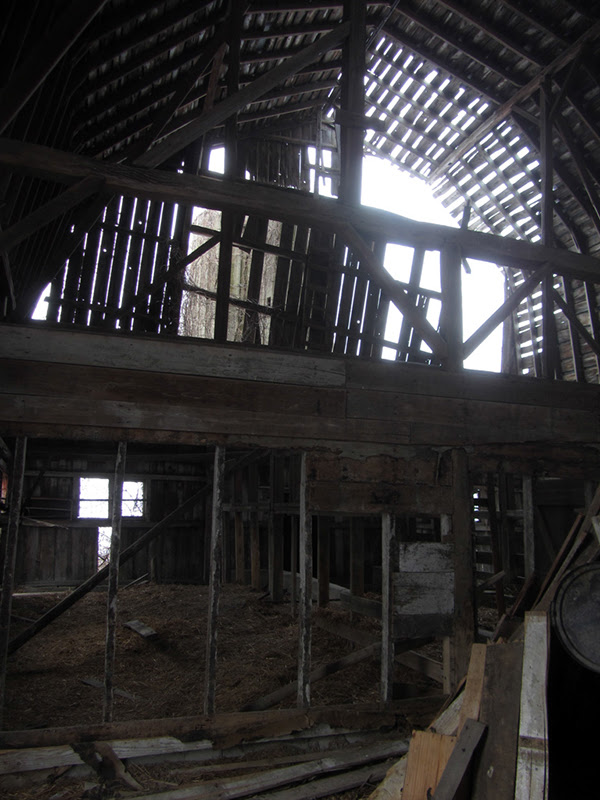 They can't remain in a state of ruin forever after all, and you may have noticed that they aren't building them like this anymore. Today's barns are depressingly uncreative, bland sheetmetal boxes that are simply slapped together, unlike these gambreled wonders of hand-carpentry. I mean look at this beam here--it's a tree: 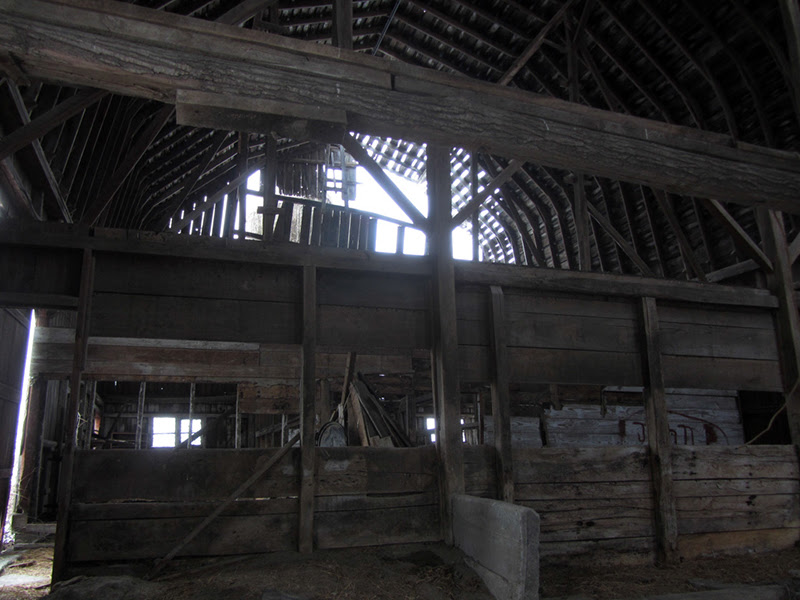 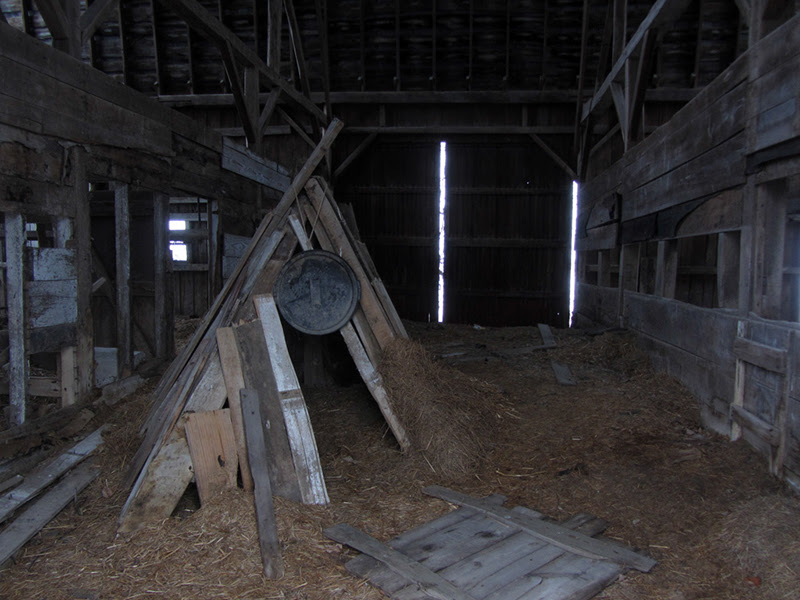 Perhaps this barn was not quite as abandoned as I originally calculated...? 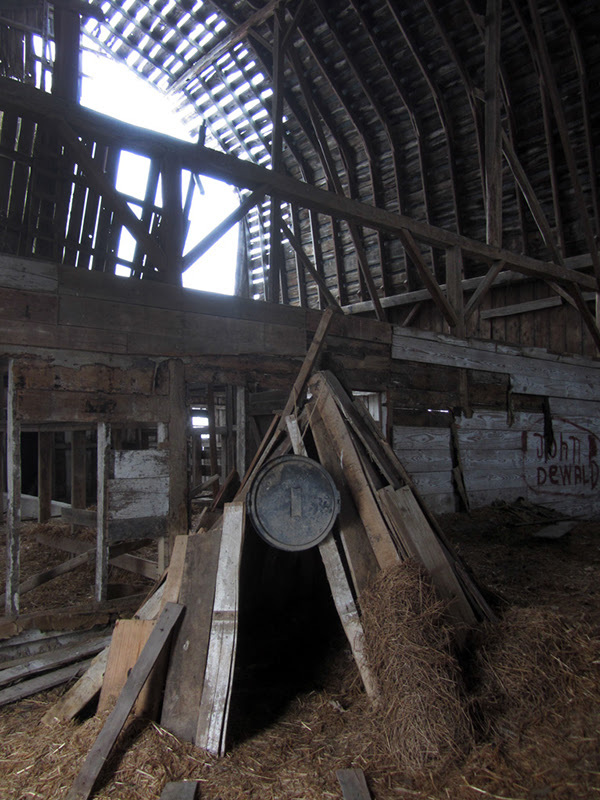