Despite once being so commonplace, the completely blown-out ruinscapes where dozens of obliterated buildings often clustered in areas of total desolation and utter carnage, and which have become the archetypal image of Detroit in the past several years, have also begun to disappear somewhat. Or, at least they've started to get cleaned up a little so that they don't look quite so gratuitously apocalyptic.

The site of the old Michigan Stamping Co. at 3185 Bellevue is one that has been mostly demolished, having sat in complete ruins for many years after being destroyed by some long-ago inferno.

I only learned its name by noticing a faded 90-year-old sign that was painted on the side of it. It was also interesting to note that the white-painted building across the street actually shares the same brick pattern in its design...

Only after looking at the Sanborn maps of this devastated area was I able to piece together its history. Sometimes dealing with Detroit history is like studying a lost civilization that was erased from the Earth by some cataclysm long ago...but the reality is that this all happened in the span of a mere generation.

Anyway, it turns out that the buildings on both sides of the street were once owned by Michigan Stamping Co., and were built in the late 1800s or early 1900s.

According to coachbuilt.com, Michigan Stamping was a sheet metal product manufacturer founded in Chesterfield, Michigan. They were one of the first suppliers of Ford Motor Co., back when Ford was still located in the tiny factory on Mack Avenue. All the Model-T bodies back then were produced by either Michigan Stamping or Parish & Bingham; they were identified by a "M.S.B." pennant stamped on the frame, or a "P&B" inside a circle. In 1916 Michigan Stamping relocated from Chesterfield to this spot in order to be nearer to their main customer. Michigan Stamping is also where John W. Murray got his start, before he left in 1913 to found what later became Murray Body.

This cluster of crumbling brick buildings sat along part of the old Detroit Terminal Railroad beltline, which sort of became the cradle of the early automobile industry as it grew out of the old shipbuilding and stovemaking industries, and rolled inland from the overcrowded centers of manufacturing on the Detroit Riverfront.

In the early 1900s the Detroit Terminal beltline connected all the various railroads leading out of the city like a big girdle, and as such many of the new factories of Detroit's blossoming 20th century industries were built along it for easy freight access.

The tracks on this branch of the Detroit Terminal RR used to go north-south right down the center between Bellevue and Beaufait Street, giving birth to a mini industrial corridor. Today its right-of-way resembles an odd alley, a green scar tissue of superfluous scrub land where the east side was once lacerated by the knife of industry. You can still mostly trace it out on Google Maps, from the riverfront to the Packard Plant.

The Sanborn map for 1915 shows sheet metal work and japanning going on in these buildings, which says to me that they may have been in the stove-making business, perhaps—based on their namesake—for the nearby Michigan Stove Company, which was also on the Detroit Terminal RR, at the waterfront near Belle Isle. Michigan Stamping could have also made metal for Detroit's early refrigerator business, which took off around this same time.

The book Who Really Made Your Car? says that it was actually the Michigan Stamping Co. who originally built the plant at Mack Avenue in 1916 that later became Briggs Body, and ultimately the Chrysler Corporation's Mack Stamping Plant. Perhaps then this chapter in Detroit manufacturing history perfectly represents the changeover from Detroit as the old stove-making capitol to Detroit the Motor City?

The 1922 Sanborn map however shows these particular buildings as no longer occupied by Michigan Stamping but by the Lalley Light Corp., manufacturing "portable electric lighting plants." Historian Clarence Burton says that this company was organized in 1917, making "electric light and power plants for private homes," and that they were the second largest such company in the nation. The following ad was copied from the February 1922 Popular Mechanics: 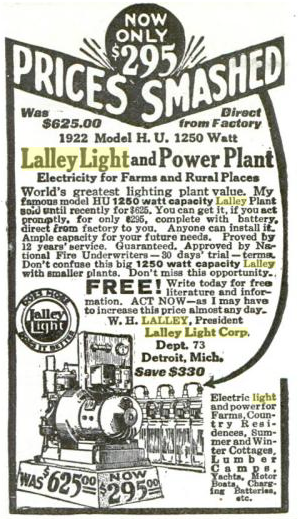 Another circa-1918 advertisement shows the company with an address of 1824 Mt. Elliott Avenue, and appears to be marketing its products exclusively to rural farmers. At the time electricity was generally readily available in urban population centers but most of the country had yet to see the glow of the light bulb.

The Michigan Stamping Co. was eventually purchased by Briggs Body, and became a Chrysler Corp. body plant before it was closed down in 1979, according to coachbuilt.com.

This site might have most recently been a junkyard, because there were a lot of derelict vehicles strewn around...the headlight of another old utility truck peeked through a gouge in the wall of the building that it had probably created after being slammed into said building, by the looks of it:

In 2008 this pair of buildings at 3185 Bellevue was put on Mayor Kwame Kilpatrick's extremely long and unlikely demolition list. Out of the 50 that were on the list, this was one of the ones that actually did get knocked down.

I wandered in and out amongst the several other blown-up shells of buildings that littered this block.

It seemed that fire had ravaged every single one of them.

The back of this one looked as if an army tank had driven through it in one of those old-time black & white film reels of the liberation of occupied France in World War II:

I decided to go across the street into the taller, white building. It gave a good view over the one I had just explored:

Here you can see the old paint sign that tipped me off:

Inside of the white building across the street at 770 Bellevue, the ground floor had been gutted by fire but the upper floors remained almost perfect:

According to the c.1915 Sanborn map this building was also owned by Michigan Stamping, and housed their iron japanning ovens, as well as other sheet metal work processes.

Down the street I could see where one of the old Columbia Motors buildings had been, though it too is now demolished:

Out back I could see a neighboring plant that wasn't in ruins like the rest:

This reinforced concrete building was built in 1913 according to the Sanborn map:

...It had a type of reinforced concrete column that I'd never seen before—splayed hexagonal.

I decided to wander off up the street again and explore the remaining Columbia Motors buildings:

As I explained in an older post, Columbia Motors was the one that acquired the Liberty Motors Plant in 1923, before going bankrupt and Budd Wheel took it over. The 1922 Sanborn maps show that Columbia Motors owned at least three buildings in this immediate area.

Columbia got their start in 1916 under the leadership of John Bayerline, formerly of King Motors and Warren Motors, and that of William Metzger, who came to fame as an organizer of Cadillac Motors and later co-founded E-M-F. An ad from 1920 emphasizes the Columbia's build quality and reliability over glitz and glamor.

This place didn't look like it was long for the world, with scrappers apparently removing large structural members, resulting in a lot of sagging.

It was also oddly filled with a wide assortment of plastic front bumpers for modern cars:

I think Huppmobile may have also used one of these buildings after Columbia died out in 1924.

Walking across the street again, I came to a more modern looking building that had a sign on it indicating it was last used by a company called Coldform Fasteners: