Clinton County, just north of the Michigan state capitol of Lansing, was set off in 1831 and organized in 1839. Like many other things that were given names during that time period, it was named after DeWitt Clinton, the governor of New York and "Father of the Erie Canal," the route by which many crowded ex-New Yorkers were swiftly becoming the new Michigan settlers. The first settler, George Campau, arrived in 1826, opening up a trading post. Agriculture has always been Clinton County's mainstay. The population today is around 64,000 and the county seat is at St. Johns. 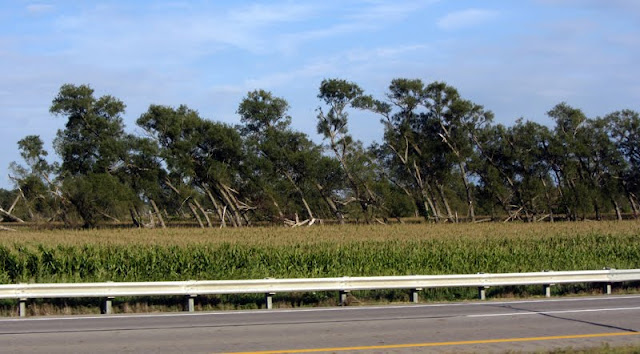 I lived in Isabella County for about five years, and commuted a lot back and forth to Detroit. During those uneventful drives down US-27 I passed directly through Clinton County, which was made even more dull by the fact that the speed limit there was shunted down to 55mph. The high point however was "The Land of Bending Trees" as I came to call it.

I never have learned exactly what caused this localized phenomenon, and the only theories I've heard include some freak ice storm many years ago, a severe wind shear, or something like that. It's pretty wild looking, anyway.

According to David M. Brown's Michigan County Atlas, one of my standby books that I always consult for rural history, southwestern Michigan was the thriving center of the American peppermint growing business in the latter 19th century. But in the 1930s "an uncontrollable disease" called verticillium wilt devastated the area, and the old mint fields of Kalamazoo County, VanBuren County, and others were abandoned. The peppermint farming industry then relocated here to Clinton County, and by 1938 was doing well. The wilt followed however, and once again the peppermint crop was laid to waste by the 1950s.

Spearmint is still being farmed in Clinton County, as well as grain, beans, and dairy. But Clinton County can go down in history for one other very notable reason--having been the site of the first-ever concert performed outside of Canada by the popular classic rock band Rush.... One day I found myself in Lansing and decided to see about locating some things I had marked in Clinton County. The first one I wanted to check out was an old drive-in theater, the Northside.

This was the old driveway:

It was named the Northside Drive-In Theater undoubtedly because it sat just north of Lansing, along Old 27. Today there is hardly a trace left of it, since it was mostly leveled for a gravel quarry. I noticed from aerial views however that it looked like half of it had been left alone and had become overgrown with forest, so I intended to look very closely at that part for any clues that might remain, with hopeful visions of finding speakers hung up on stands in the middle of a new forest.

Here was what had been the road leading from the front gate past the big sign, toward the rows...a tiny bit of asphalt still peeks through the carpet of leaves:

According to WaterWinterWonderland, the Northside opened in August of 1952, when The Snows of Kilimanjaro with Gregory Peck, and The Quiet Man with John Wayne were top box office hits. It closed on August 18 of 1988, when Beetlejuice, Die Hard, Willow, Who Framed Roger Rabbit, and Rain Man were playing. It held up to 800 cars, and opened as a single-screen theater, later expanding into a triple-screen plex after a "fireworks accident" caused the original screen to burn down, "sometime in the '70s."

It seems the Northside always had a big problem with people sneaking in through the woods without paying, which was one of the first things I thought of when I walked onto the property. It was sort of surrounded by a swampy area, so I guess that was sort of a deterrent, but it just seemed like the quintessential drive-in act of sneaking in would have presented little challenge here. I grew up going to drive-ins, and am lucky enough to live near one of the last ones in Michigan, the Ford-Wyoming.

This is where one of the aisles branched out from the driveway that wrapped around the whole viewing area (the cars would have been facing in this direction toward the screen):

The WaterWinterWonderland page shows old photos of the theater when it was still standing, as well as the iconic shots of the old speakers hanging on their stands while tall weeds begin to take over, the archetypal image of the decline of the American drive-in. Sadly, I would find nothing that romantic or satisfying on this, my long-awaited first explore of an abandoned drive-in theater.


I started looking closer in the dense thicket, and did eventually start seeing rows of these little concrete pads with a two-inch circular hole in the middle, which I presumed used to hold the metal poles upon which the speakers were hung:

There is a video on Youtube with old footage of the Northside as it looked before and during demolition, accompanied by the eccentric commentary of some guy and one of the voices in his head.

Here's another of the pads, which was almost totally covered in dirt before I scraped it away:

The next one had a tree growing out of it...this place really was much more overgrown than I expected. It sure seemed like the Northside had been abandoned a lot longer ago than 1988...

These electric wires may have supplied power to the rows of speakers, or perhaps one of the structures like the snack bar or restrooms:

Concrete footing for a lightpole?

On May 18th, 1974, Lansing area promoters put together an outdoor rock festival that was supposed to have been like a mid-'70s Michigan version of Woodstock. The bill included Dr. John, Liverpool, Skyhook, Cosmic Beam Experience, Max Bone, and a little-known Canadian band named Rush. According to the fan page 2112.net, up to 30,000 people were expected to attend, but a torrential rain squashed the event and only about 1,300 people showed up. Since the headline band didn't show up, and because the audience was unfamiliar with the songs, their mood toward Rush was a bit indifferent.

Being a big Rush fan myself, I found it pretty incredible to learn after exploring this place that it was the scene of their first-ever American show, even if it was sort of a flop.

An article in a local paper told of how the crowd was rowdy and drugged-out, with four people having to leave by ambulance after overdosing, one of whom was a 16-year-old who had taken PCP. It also seems that some concertgoers attended in their cars, as if it were a regular drive-in movie. The police turned a blind eye to the flagrant and widespread marijuana usage, but local DeWitt Township residents were reportedly outraged at the noise and hedonistic display.

There is a misconception foisted that the first-ever U.S. appearance by Rush occurred in Cleveland in June of '74, but that's just another case of Ohioan usurpation of Michiganian exceptionalism ;) ...A definitive list of every Rush concert date ever verifies that the Northside was their first American show, and that they returned to play Detroit on September 6th of 1974. They played the Michigan Palace (Michigan Theater) several more times that year. Rush guitarist Alex Lifeson himself was even quoted at the Palace of Auburn Hills in 1994 as saying that their first show was in Michigan:

We played our first American show ever not to far from here in East Lansing at an outdoor, uh...it was over twenty years ago, and it was in the mud and it was raining and stuff. But we've been coming to this area for so long, and I know you'll start cheering and everything, but this is one of the best places to play in America. I mean that sincerely.

Heh, reminds me of this Simpsons scene.

According to a newspaper article dated August 30th 1983, the DeWitt Township Police and Clinton County Sheriff raided the Northside on "Buck Night," which was supposed to mean dollar admission, but with a knowing wink also applied to the cost of all-you-can-drink beers being surreptitiously dispensed from kegs in the backs of pickup trucks, and dollar doobies being openly peddled by other miscreants.

Word spread quickly of the "Buck Night" dollar admission, bringing out the freaks and goons from urban Lansing, Michigan State University, and surrounding rural counties. Supposedly a 12-year-old was sighted stumbling down an aisle with a beer in hand, among other atrocities. Sounds like good fun for the whole family.

The raid resulted in four arrests, but the crowd of 1,000 attendees soon started chanting "GET THE PIGS," and the police had to make a hasty retreat to avoid coming under attack. Apparently there had been "problems" like this at the Northside for several years, but this was the most brazen display of anarchy the DeWitt police had ever seen (gasp!). Complaints of heavy traffic, vandalism, and disturbances from surrounding business owners and residents prompted the increased police presence.

This was about all I could find at the old Northside, sadly, but I had other tricks up my sleeve for this afternoon.

I made my way to the old village of Eagle, in southwestern Clinton County. David M. Brown records that Eagle was settled by Anthony Niles and Stephen Groger in 1834. When the railroad arrived in 1872, the village moved a half mile to the east, was platted in 1873, and incorporated in 1887.

This old railroad caboose sat at the fairgrounds in Eagle. Being old enough to actually remember the days when all trains had cabooses at their tail end, I found this to be a nice little blast from the past.

A caboose, for you young whippersnappers, is a coach that was designed to carry the men who were responsible for throwing the track switches and brakes along a train's route, and other similar tasks. Nowadays that job is done automatically by the wonders of electricity, so cabooses (and men) are no longer needed. Gee pa, what a swell world we live in!

Working on the railroad meant living on the railroad; like firemen or sailors, you were on duty for sometimes days at a stretch, meaning you needed sleeping quarters. The caboose was it. I believe the low box on the right was either a bench or a cot:

On passenger trains, the caboose was also the conductor's office. Again, for those of you who didn't grow up in the 1800s, he was the guy who took your tickets, had the big pocketwatch, and cried, "Allllllll aboard!" before departure.

Here are the frames of two more cots (beds):

In the middle of the caboose is the cupola, an elevated room where the brakemen would sit while underway, so as to be better able to keep an eye on the train for signs of trouble.

Up in the cupola:

View from the cupola:

There were an awful lot of instructional signs in here.

If I'm not mistaken, this wheel was how you applied the manual brake:

One last thing I had to check out in Eagle was an old schoolhouse, which actually sat on the edge of the still active (but hardly bustling) town:

It looked like I was stepping into the romanticized setting of an early American oil painting, picturesquely framed in all these big gnarled tree branches and brambles.

The interior was in the typical condition I usually find these old one-room schools--mostly original but being used for junk storage. The stamped metal ceiling was showing rust:

A wire fencing spool, and other random items no doubt stored by whatever farmer owned this land:

I'd say it was in remarkably good shape for being over 100 years old.

Even the belfry was still intact and original-looking: