Iosco County only ever had 18 post offices during its history according to Michigan Ghost Towns of the Lower Peninsula, and only eight of them still remained in 1970 when Roy L. Dodge was writing it. One of them was the incorporated city of AuSable, which had 10,000 people during the height of the lumber boom, but was almost killed off completely by a wildfire in 1911.

Gene Scott wrote in Michigan Shadow Towns that the fire was the most destructive to ever affect a Michigan city--so destructive that the 1910 census had to be retaken to account for all the dead people. A barge had to be used as a last resort to take women and children out into Lake Huron to survive the blaze. Such were the prices to be paid "when pine was king." The city disincorporated in 1929, and Dodge calls it the most spectacular ghost town in Michigan's history as a result; the community still sort of exists, though it is basically part of Oscoda.

David M. Brown says in his Michigan County Atlas that the name Iosco was that of a fictitious Ottawa hero in one of Schoolcraft's legends, and it has been translated to supposedly mean "shining water" or "water of light." Originally set off as Kanotin County in 1831 (Kanotin was an actual Ojibwa chief), it was renamed Iosco in 1843 and organized in 1857. The county population is around 27,000 and the seat is at Tawas City.

Except for Alabaster, Iosco County remained very sparsely developed until after the Civil War. In the 1870s it was the second biggest fishery in the state. Its location at the mouth of the great AuSable River meant that it was an ideal capitol for the lumber industry in the 1880s as well, as the wide river provided access deep into the heart of the pine forests. After the twin towns of Oscoda / AuSable burned in 1911, the lumber industry here ceased and it has been mostly farming ever since. 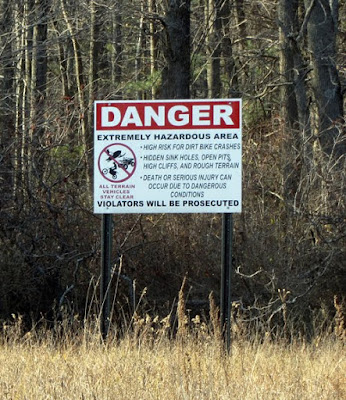 The gypsum mine at Alabaster itself is the other industry, its outcropping having been discovered by none other than State Geologist Douglass Houghton in 1838 on one of his expeditions.

While driving along the Lake Huron shore once, I pulled over to look at a historical marker for the settlement of Alabaster. Now overgrown by forest, signs warn of the dangers lurking within the older quarry areas. Out on the lake I could see some ruined structure that had once served ships by loading the quarried mineral into their holds via a tramway: 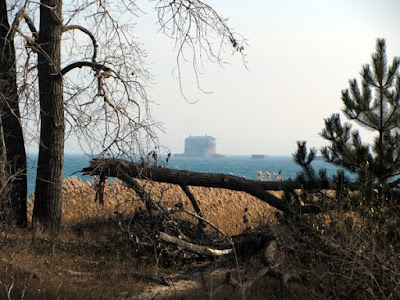 It looked worthy of exploring, if only I could get out there... 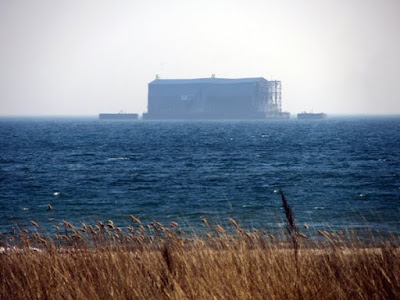 Since it was looking unlikely that I would be able to get my boat up here, I decided to attempt walking across the lake ice in late winter.

Plans to open a pit mine here on the shores of Iosco County were formulated as early as 1841, but it was not until 1862 that it actually came to pass. According to an article on the Michigan State University Geology Department's website, patriarchal Detroiter Bela Hubbard and State Geologist Douglass Houghton discovered gypsum in the mouth of the Aus Gres River in 1838. The first mill was constructed here at Alabaster in 1862, and this area became the most important gypsum mining area in Michigan. Grand Rapids was also famous for gypsum production, as I covered in another post.

Settled in 1854, Alabaster had a population of 300 by 1877 Dodge says, with two hotels, a plaster works, three fisheries, a sawmill, a wagonmaker, a general store, and a stop on the Detroit & Mackinac Railroad. It was a little allegorical to name the town after the mineral they were quarrying; "alabaster" is the old word for gypsum, and King Solomon's Temple was supposedly constructed of it.

The quarry's production was strong in the 1870s and would remain so until 1891 when the operation was destroyed by fire. It was rebuilt quickly, and in fact supplied the material for the main building at the Chicago Columbian Exposition of 1893, giving birth to its title as the "White City." Sales naturally expanded after that, and Michigan became America's leading exporter of gypsum for over a century, thanks to the quarry at Alabaster.

You may recall the lyric, "Thine alabaster cities gleam" from the famous song "America the Beautiful"...it was a direct reference to the White City of the Columbian Exposition:

O beautiful for patriot dream
That sees beyond the years
Thine alabaster cities gleam
Undimmed by human tears!
America! America!
God shed his grace on thee
And crown thy good with brotherhood
From sea to shining sea!

The song was penned by Katherine Lee Bates in 1893, after traveling across the country and seeing the Columbian Exposition, as well as many fruited plains and amber waves of grain on her way to give a lecture amongst the purple mountains' majesty in Colorado. It is nice to know that Michigan made its mark on that song by lending its gleam to Chicago's ivory towers.

Sadly, I think today America's alabaster cities' gleam has dulled to a rather ruddier hue, stained in their lost innocence by the deepening bullshit of rotten politics and ongoing inequality--but you already know all about that.

This quarry was absorbed into U.S. Gypsum Corp. in 1902. By 1905 Brown says, the village of Alabaster peaked in population at 600 people, but fell to less than 400 by 1920. The quarry still operates today, albeit on a smaller scale.

The Iosco County Historical Museum offers a detailed description of the loader's function:

The tramway of the U. S. Gypsum Company at Alabaster has long been a tourist attraction. Built in 1928 the tramway stretches 1.3 miles out into Saginaw Bay. Like a horizontal ski-lift, the cable system carries 72 "buckets" of gypsum to a waiting ship or to the storage bin. Each bucket holds more than two tons. The tramway includes 6,450 feet of one and three-quarter inch steel cable and 14,000 feet of three-quarter inch cable. At a length of 6,350 feet it is the longest over-water bucket tramway in the world.

The manufacturer of the tramway went out of business years ago and the Gypsum Co. has had to devise its own repairs for years. In the current year 2001, the tramway is broken and not operating. It is doubtful if it will operate again.

So basically this tramway was constructed instead of dredging a channel for ships to be able to come in closer to shore. There are a couple more historic photos of the loader in action on Boatnerd.

I had to zoom my camera in all the way to see it out there in the foggy distances, and I stood here for a while deciding whether I ought to risk wandering out there. The walk was 1.3 miles...

As you can see the surface was a little iffier than I was hoping for, and it even looks like there might be open water out there on the horizon. What had been a rock-solid continental plate of ice last week had been seriously compromised in the face of a sudden unexpected warm spell. I had hoped that there would be enough left for me to get out there and back really quickly, but I was getting the feeling that it just wasn't going to be safe today. Stay tuned for next year; hopefully I'll be able to update this post.