A Way of Doing Business

It's times like this that I really wish I had the money for a negative scanner, and the patience to sit down and use it. Until then, I suppose you will have to suffer through some bad resolution for the sake of some exploring nostalgia; I scanned these images from prints on a flatbed in 2005, and as such the quality is horrendous, but oh well. 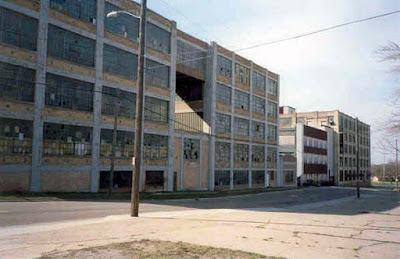 The history of western Michigan is written largely in the deeds of the mostly Dutch settlers who peopled it, and in the famous furniture-making mills that they erected in the towns there after the lumber boom era had drawn to a close and the sawmills were shut down. According to Willis Dunbar and George May's history of Michigan, by 1890 there were no less than 178 furniture companies operating in Michigan, employing 7,000 workers.

Whenever the Michigan furniture industry is mentioned, Grand Rapids is always the city that comes to mind. Grand Rapids, the "Furniture City" was indeed its humming epicenter, but many other west Michigan cities too had significant connections to it, and Muskegon was one of them. This plant on Muskegon Lake once belonged to the Shaw-Walker Furniture Co. 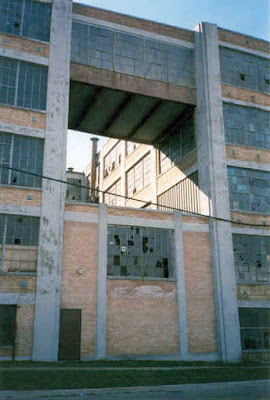 A book by Elizabeth Sherman entitled Beyond the Windswept Dunes: The Story of Maritime Muskegon observes that Charles Hackley and Thomas Hume, two of Muskegon's best-remembered lumber patriarchs, decided to stick around after the last trees were felled and the city was looking for other ways to keep its economy afloat. In 1879 they began investing to help manufacturing firms--especially those dealing with wooden products--in getting off the ground. 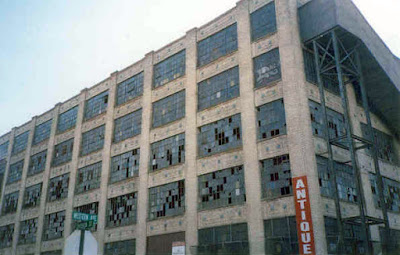 A digitized article from the 1950s on the website pastpresentfuture.net, entitled "Making Office Work Easier, How Ceaseless Effort to Speed and Simplify Record Keeping Built a Business" tells a short history of the Shaw-Walker company. In March of 1899 two men, A.W. Shaw and L.C. Walker, took advantage of the capital investment program being offered by Hackley and Hume, and started the Shaw-Walker Co. in a small space within the Muskegon Opera House.

Shaw and Walker began by building a mail-order business in 3x5 filing cards, which were just becoming popular at the time for record-keeping. They printed and cut their own index cards which they sold as systems, in wooden cabinets with drawers whose construction they had to outsource. After one year, they were doing so well with this that they had outgrown their space in the opera house and built their own small building elsewhere. By 1901, that structure too had been outgrown, and eventually this sprawling plant at 921 W. Western Avenue took root. 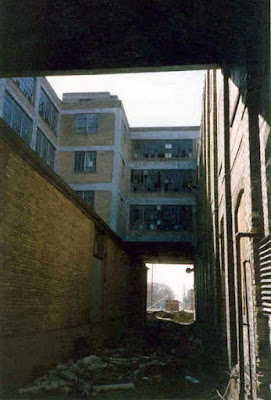 According to a webpage provided by a reader, This plant was built from 1911 to 1913 and the five-story addition was designed by Albert Kahn and Ernest Wilby.

Within their lifetime Shaw and Walker witnessed the amazing advances in office methods and equipment, from the horse-and-buggy days before the assembly line and telephone, to the "modern" age of 3x5 card filing systems, and the assembly line. As such, they sought to introduce methods and equipment that would save American businesses money, time, and space, through better organization. The article asserts that the progress of the Shaw-Walker company thus paralleled the progress of the corporate business office in America. 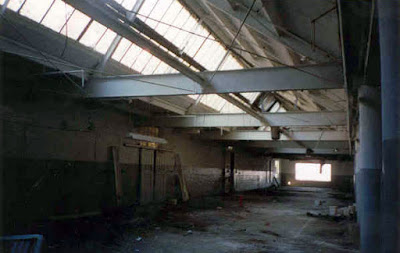 They always held dear in their mission the concept of "service;" that is, they were not simply selling a physical product, but the correct, efficient system of using it. To help facilitate this, they began publishing their own internal circular, entitled, System. The article claims that this was one of the earliest business magazines, if not the earliest in America, and was destined to play an important part in the history of business journalism.

In 1902 Mr. Shaw took System to Chicago where it presumably received greater circulation, and subsequently became the nation's leading business paper for a quarter of a century. The System name was changed to The Magazine of Business, and by the late 1940s was absorbed in a merger with McGraw-Hill Publishing, to ultimately become Businessweek--a publication that you undoubtedly recognize and have perhaps even read. 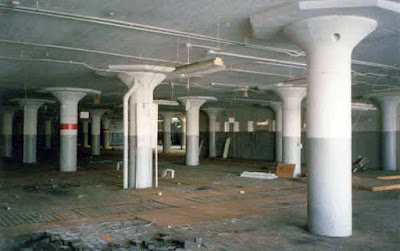 Meanwhile, as Mr. Shaw was doing this, Mr. Walker was back in Muskegon staying busy by continuing to develop their record-keeping systems and office equipment. The company constantly broadened its product line and extended its dealer distribution network to every major city in the nation.

They claimed to have improved on the early steel filing cabinet, taking it from being what the article called a "crude affair" that businessmen were "slow to adopt," to debuting their "Built Like a Skyscraper" model in 1913, which was an immediate success. By 1917 the article says, the wooden filing cabinet was obsolete. 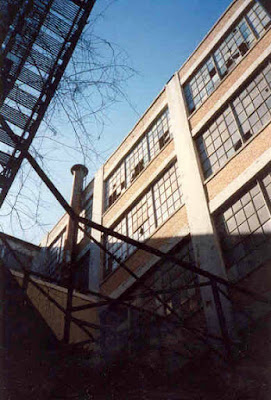 Likewise, Shaw-Walker improved on the early steel office desk. The first ones began showing up on the market around 1907, and were called "cold, ugly, noisy, uncomfortable, and cheap-looking," according to businessmen who had them. Shaw-Walker engineers took their time and came up with one that improved on all that by 1929. 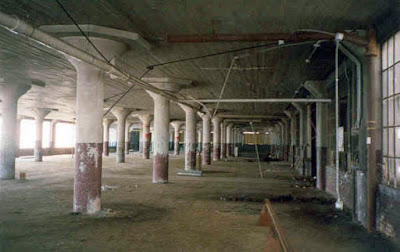 Ten years later they again made a splash when they came out with an experimental "lower height" desk, which they beta-tested with 233 executives. It measured 29 inches tall instead of the standard 30 1/2 inches tall, and ended up being so well liked that by 1942 the 29-inch height was quickly becoming the new industry standard. They also later made an office chair that was revolutionary and highly successful, the "Correct Seating Chair." 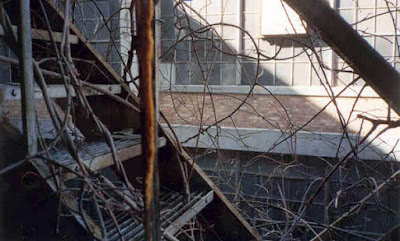 By the 1950s Shaw-Walker had seven plants, one of which was in Kalamazoo, while another was on Long Island, New York. They produced a product line comprising 4,000 different office items. 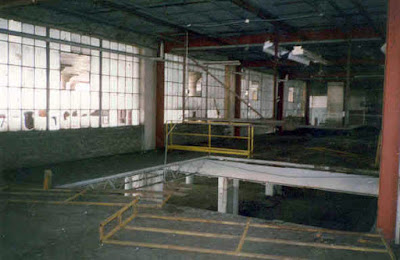 But as with many other sectors of American manufacturing, when the 1970 and '80s rolled around times were no longer as flush as they once were, and by 1989 the Shaw-Walker Co. was sold to Westinghouse.

In its almost 90-year existence, this plant had employed thousands of Muskegon residents. 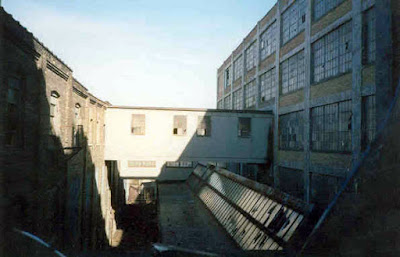 Westinghouse then consolidated Shaw-Walker with Knoll, Reff, and Westinghouse Furniture Systems of Grand Rapids to form a single subsidiary called Knoll Group Inc., and somewhere along the way this plant was shut down. I assume parts of it were subdivided for leasing by smaller tenants at some point, judging by the large sign for an antiques store hanging on the outside of the building.

Not long after I visited this 1 million-square-foot plant in 2005, the conversion into loft apartments began. It is known today as the Watermark Center. 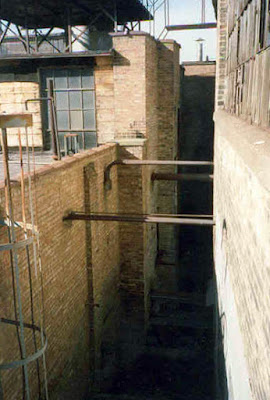 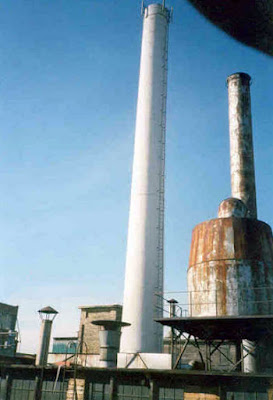 I am not exactly sure what this large chamber was, but it looks like an oven or kiln...there were other similar ones nearby if I recall correctly: 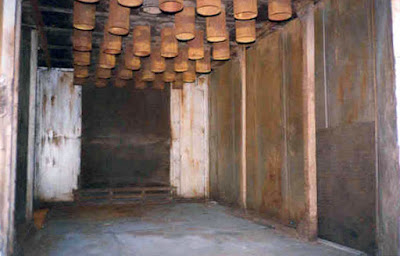 The floors in one wing of the building had warped so drastically and so perfectly that it looked like the surface of a lake, with wooden waves: 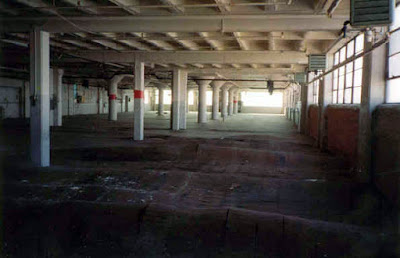 I had seen severely warped wooden floors in old plants before, but never with as dramatic and perfect results as this. 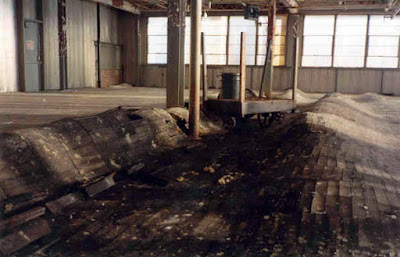 From the roof, Lake Muskegon could easily be seen: 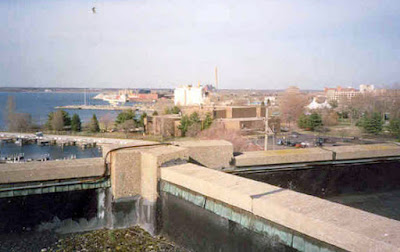 Lake Michigan itself was not that far away either. One thing that sticks out in my memory of this place is that as I was squirming underneath the fence to get in, the ground in the courtyard of the plant that I was face-down in was not made of mud or dirt...it was made up of pure beach sand. Not at all what you would expect from some old dirty industrial site. 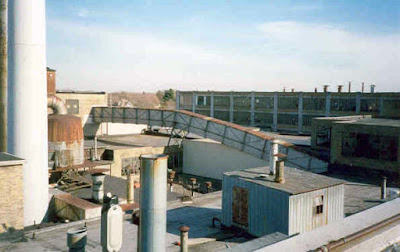 I quickly realized upon surveying the roof that I had not allotted myself nearly enough time to explore this entire place properly. 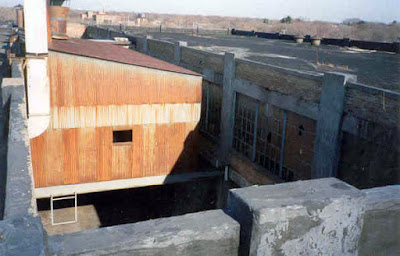 The overall cleanliness of the plant was also a stark contrast to what I was used to back home. Graffiti was non-existent, fixtures were still intact, and very few windows were broken out, despite access to the buildings being fairly easy. 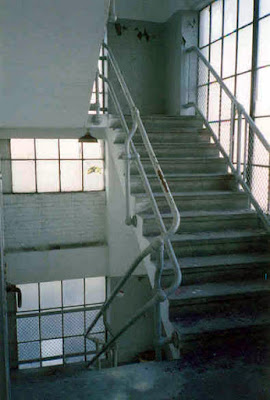 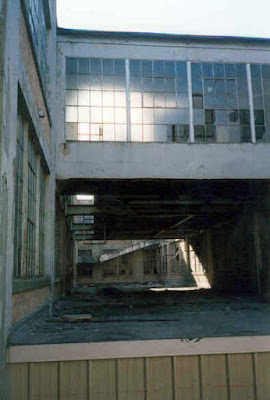 "Riot-proof" windows along Division Street however reveal that all was not necessarily well in Muskegon: 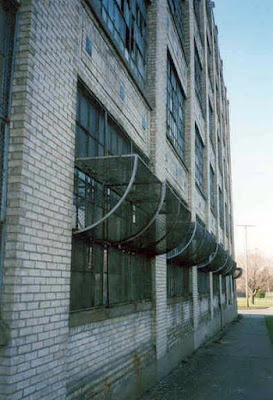 Just like Detroit, Muskegon and many other industrial towns in northern Michigan suffered from increasing crime and blight as the economy tanked and racial tensions rose after the 1960s. During the 1967 Detroit Riot, angry people in many other cities across the state took to the streets to loot and fight, and Muskegon was one of them. The severity of the Detroit Insurrection completely overshadowed the relatively minor violence that occurred in other Michigan cities, but it should not be forgotten that it was widespread, and not isolated to just Detroit.

Elsewhere, in the downtown area, I found some other vacant "eyesores," as the terminology goes. 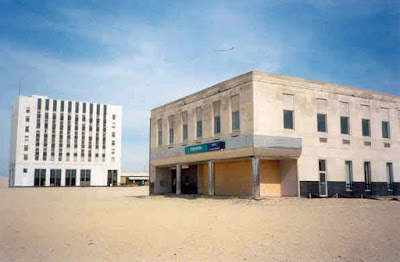 In one of the stranger scenes I've ever witnessed, a whole row of old storefronts and even this eight-story building stood boarded up along what had once apparently been a street but was now a vast people-less expanse of beach sand. 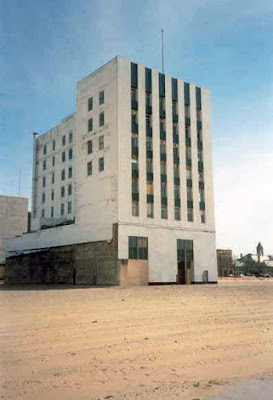 Little did I know at the time, this was not par for the course but in fact the throes of some redevelopment project that has today converted this apparent desert wasteland into a thriving downtown district again. 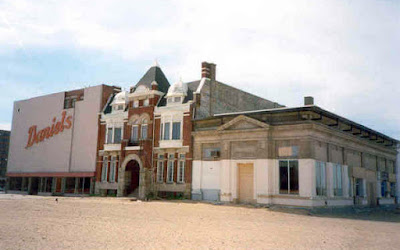 In the above photo, the building on the far right was the old Muskegon Savings Bank, while the one in the center (and in the next photo) used to be the Century Club. 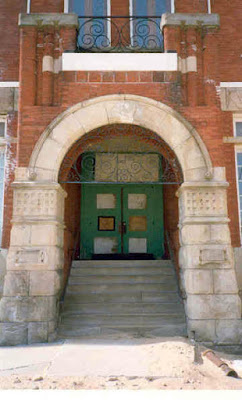 Today, thanks to the magic of Google, these are the very same street scenes today: 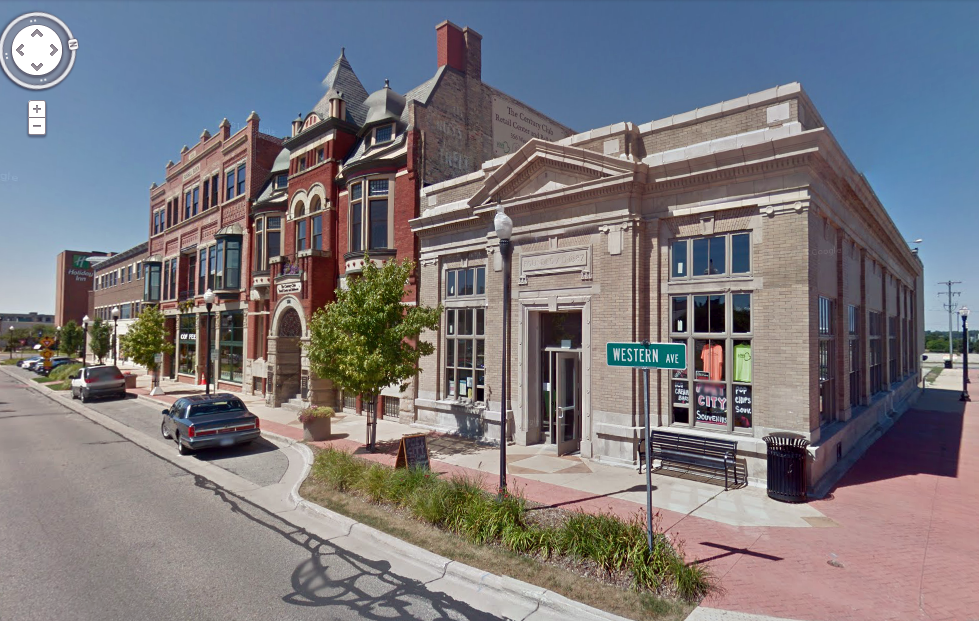 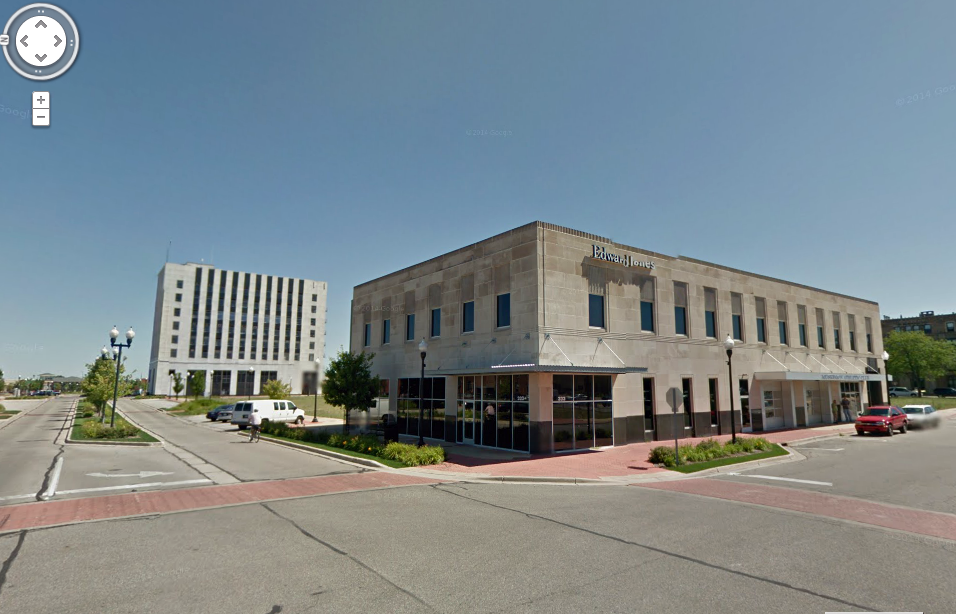 References:
Beyond the Windswept Dunes: The Story of Maritime Muskegon, by Elizabeth B. Sherman, p.54
Michigan, A History of the Wolverine State, by Willis Dunbar & George May, p. 401 & 639
http://pastpresentfuture.net/archives/sw.html
http://www.trainsarefun.com/lirr/lirr%20sidings/lirrindustryseries/lirrvolume2shaw-walkerco.htm
http://www.mlive.com/news/muskegon/index.ssf/2009/08/furniture_icon_shaw_walker_dea.html
http://www.fundinguniverse.com/company-histories/knoll-group-inc-history/
http://www.watermarkcenter.com/lofts/history/
http://actorscolony.com/Lakeside.htm