Saginaw. The very name is almost as synonymous with Rust Belt decay as Detroit.

The widespread industrial decay and emptiness has even given birth to the derisive (or affectionate?) nickname of "Saginasty."

I'm not sure how I've managed to go this long without giving the great city of Saginaw it's due coverage, but it is what it is, I suppose.

There is no lack of boarded-up buildings here... 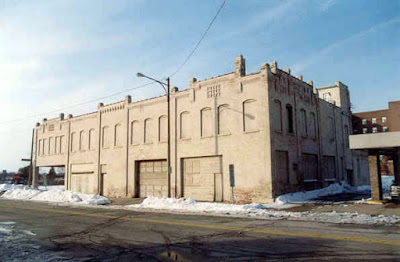 However, one such building downtown that always stuck out to me was this fancy beast at the corner of S. Water Street and the E. Genessee Bridge:

The large eagle-shaped gargoyles along the cornice of the building are one of its distinguishing features, and since I never could find out the proper name of the building, I dubbed it the "Eagoyle Building."

Searching under the address of 101-107 S. Water Street didn't turn up much, except for an old city directory from 1866 that lists the corner as having been occupied by photographers, druggists, grocers, and bakers. The book History of Saginaw County: From the Year 1819 Down to the Present Time, shows that in 1858 the spot was occupied by the Hoyt Block, one of whose tenants was the United States Land Office.

Unfortunately none of this information--while interesting--was of any use to me in identifying this clearly 1920s-vintage structure. So I went to the library and pulled up the online Sanborn maps, but even they were of no real help. The ones available either predated this building's construction, or the building was vacant when they were drawn (1935-36), and thus no name or description was given.

I turned to the guy who runs the PureSaginaw website, and he pointed me to a conversation on his social media page that contained a lot of interesting discussion on the building, which proved useful.

A lady named Jodi McFarland Friedman quoted a 2003 article in the Saginaw News that reported on the sale of the building, which it called the Kahan-Venient Parking Garage. The quote from the paper said that Acoustical Services Inc. of Buena Vista Township purchased the "vacant six-story structure at 107 S. Water from 96-year-old businessman Leo A. Kahan." The reported plan was to demolish it and "build condos there by 2005."

So naturally I ran "Kahan-Venient Parking" through the Google Books machine, and came up with the trade publication National Parking Association Newsletter, from 1968. Of all the obscure professions and industries to have trade publications...anyway, sure enough it corroborated the name as "Kahan-Venient." But surely this place could not have been built as early as the 1920s as a parking garage? 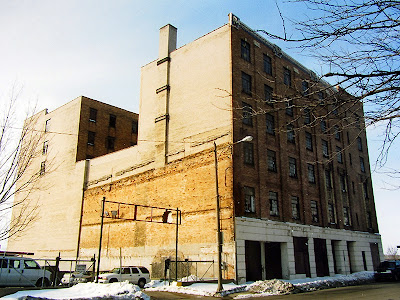 Granted, if anyone were to come up with such an idea back then I suppose Michigan would be the natural location for such a novel structure, and it surely would have been embellished architecturally in 1920s glitz, but I guess my deep-seated hatred for parking structures makes me want to believe that it began life as something else.

But as far as they go this has got to be just about the world's coolest parking structure in that case--except of course for Detroit's famous Michigan Theater, but that building was not purpose-built as a parking garage, it was converted. Then I also thought back to the fact that the recently demolished Elizabeth Street Garage in Detroit was once also a purpose-built downtown parking garage of about the same vintage as this Saginaw structure, so it doesn't seem so odd of a concept anymore. 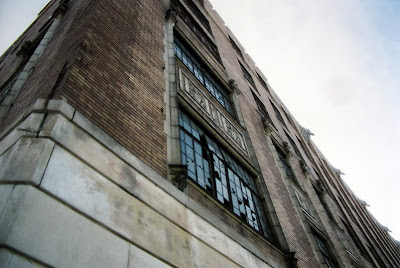 Another commenter in the PureSaginaw thread, Janet L. (Boyer) Eckhardt, claimed that it "was built to be a hotel with an inside parking garage," but that funding ran out before it was completed. Fascinating. She also claimed that her grandfather, Wm. J. Boyer Sr., owned it in the 1950s, and ran it as "Boyer's Inside Auto Park." I of course searched that name next. I didn't come up with much, but there is a FindAGrave entry that shows the same Mr. Boyer as being buried in Saginaw, and as having owned a business by that same name.

The building literally is perched on the Saginaw River, and there is no way to reach that side other than by boat: 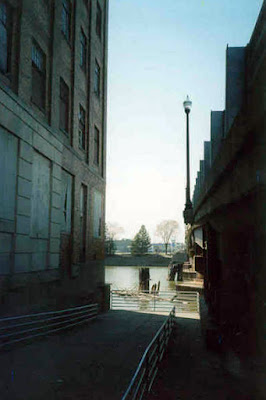 Janet L. (Boyer) Eckhardt continued to say that when the circus came to town, they housed the circus animals in this building, and "would walk them down Water Street to the Old Saginaw Auditorium."


It was quite a sight to see! I would get to feed some of the animals and ride the elephants in the parking garage. The circus wagons would park in the outside lot next to the building. The major business owners would park their cars there and would be taken back and forth to their place of business. Their cars would be detailed once a week and in the winter their cars would be nice and warm when they left work to go home. After my grandfather died, my father, Wm. J. Boyer Jr. and uncle, J. Grant Boyer ran the garage until 1959 or 1960 when they sold it to Leo Kahan, who ran Fashion Outlet, which was located next door. Mr. Kahan ran the Autopark for many years, until he moved Fashion Outlet to Genessee St. It has sat empty since then.

Eckhardt said that the cars were moved to the upper floors of this building via an old elevator, and recalled "riding one of the circus horses while riding in that elevator." 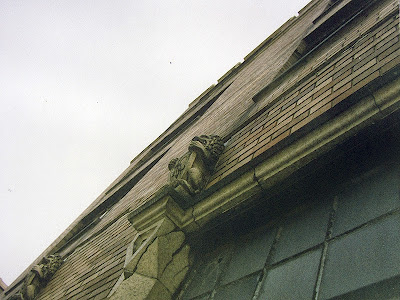 Another commenter, Lee Sayer, said that this building started out as a Ford dealership that sold both automobiles and farm equipment, but there was a fire and it never reopened as a dealership. The dealership idea seems plausible as well, as perhaps this stretch of Water Street could have originally been intended as a "motor row" for Saginaw.

As I recall, there was a fancy sort of lobby or possibly a showroom area with a mosaic tile floor in the front of this building that might substantiate that idea, but unfortunately I don't think I have a photo of it.

I had to crawl into the basement, through a rather hazardous hole in the sidewalk: 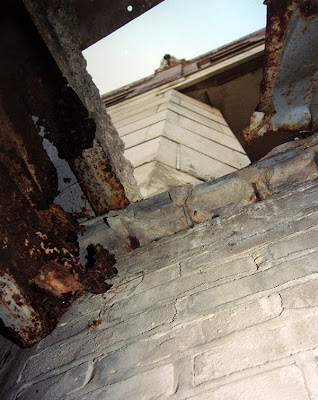 City-Data.com says this building was still owned in 1985 by Leo A. Kahan and Emelie O. Kahan, and that it was sold to Saginaw River Development LLC in November 2003, for $80,000. Its location on the river surely makes it an attractive parcel.

Inside, I noticed a large buckle in the concrete floor, which could potentially mean that soil had eroded away from beneath the foundation: 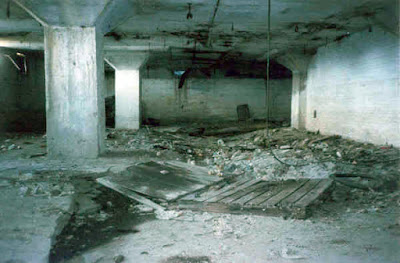 When I found a stairwell going up, it was mysteriously choked off by a cascade of old tires and wheels... 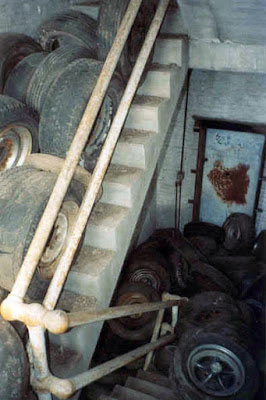 ...Was this a half-assed security measure to keep people out, or a sly attempt at getting rid of an unwanted dinosaur building by placing arson-bait in the stairwell? If someone lit these tires at the bottom, it could turn the entire stairwell into a massive torch and make it extremely difficult for the fire department to deal with.

The first couple floors seemed mysteriously blank, and I suppose that lends itself to the purpose-built parking garage idea, but why the regular sash windows? 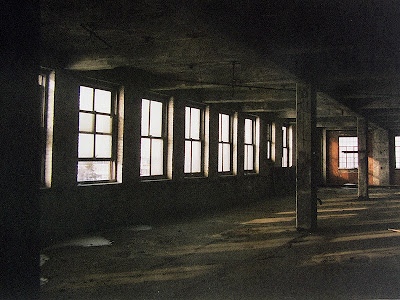 Most of the floors were identical to this as I recall, though if I am not mistaken it was also the case that a few floors were inaccessible due to the waist-deep pile of old tires against the door in the stairwell. 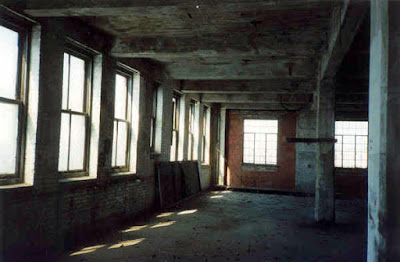 The top level of this building consisted of a very large open space: 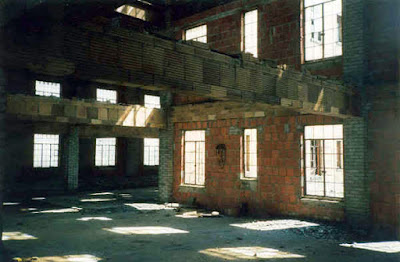 It was strange, as if either it had been very thoroughly gutted at one time, or it had never been finished. Clearly there was another floor or two above this at one time, or the floors were in the process of being removed: 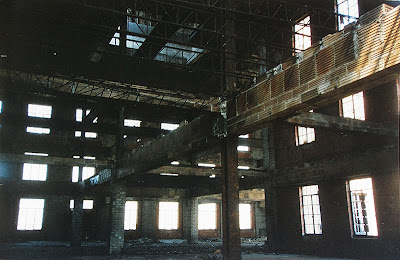 Getting to the roof access above this missing-floor gauntlet consisted of a long white-knuckled climb on a wooden stair that was so rickety that it swayed to and fro with each of my steps over the two-story drop, because for whatever reason it no longer had any lateral bracing. The view of downtown Saginaw was worth it.

In the distance at center can be seen the "Castle Museum" of the Historical Society of Saginaw County: 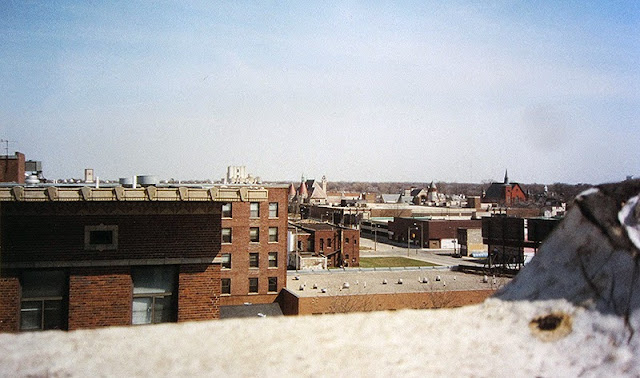 Okay, so take a look at this next photo. If you were building a parking structure, would you design it with a big light-court cutting into 50% of your available floorspace...? 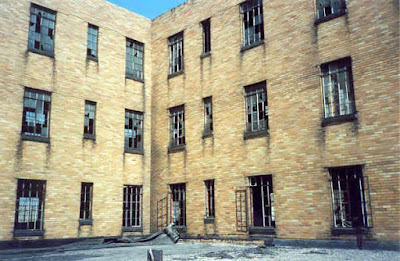 ...Only if you were insanely dedicated to the idea of disguising its true purpose from the outside, and willing to sacrifice a lot of efficiency. That's another big reason why I have a feeling that this building did not in fact start life as a parking structure.

The Saginaw River and the Second National Bank are visible from the roof between the crenellations: 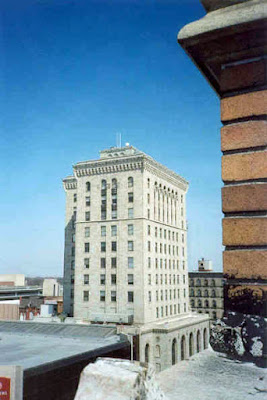 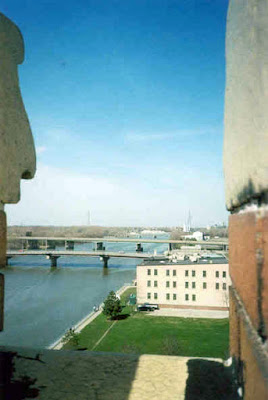 There was a mound of leftover snow still on the roof, even though this was definitely supposed to be springtime: 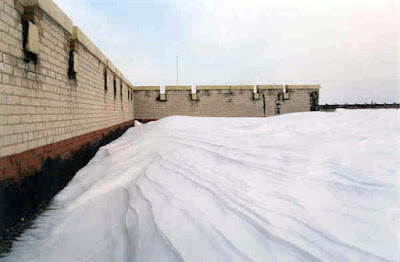 But the most interesting feature by far was the set of giant terracotta eagles, which were actually real, functional gargoyles: 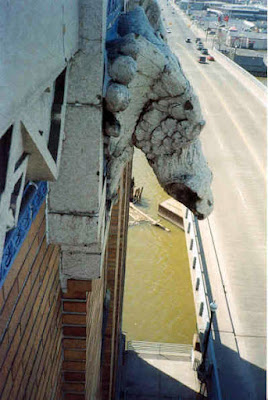 As fate would have it I was not the only person whose eye had been caught by this building. A blog called RecycleSaginaw wrote in 2010 about it, which he noticed in 1988.

He too researched it and said that it had been a parking structure, but that it "wasn’t a ramp type parking structure like we know today–they take up more room." To realize this space-savings, it utilized two "high speed" elevators that would carry the vehicles, just as Ms. Eckhart mentioned. I imagine that an underground parking structure here would have been impractical due to the issue of a high water table, with being next to the river. 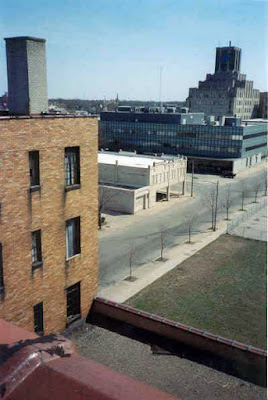 RecycleSaginaw wrote that the city of Saginaw decided they were going to tear it down, so he sent a letter to the mayor imploring that the building be saved. Supposedly the mayor put him in contact with building owner Leo Kahan who said he had no choice but to forfeit it since he couldn’t keep up with the taxes and maintenance. Somehow the building dodged the wrecking ball and changed hands again, with the plan to turn it into condos. Just what is going on with it today I am not sure, but it still looked vacant from outside the last time I cruised up 675.

UPDATE: The Historical Society of Saginaw County just replied to my original query on the building, and informed me that it did in fact begin life as the three-story Hubbell Auto Sales Co., a Ford dealership under Mr. E.F. Hubbell in the 1910s, according to the January 1921 Saginaw Board of Commerce Bulletin. Their source also corroborated that a fire destroyed the original structure to the point to where it had to be extensively reconstructed. Three more stories were added, and the terra cotta eagles were hoisted up to the new cornice-line and reinstalled.

Hubbell's dealership had moved on, but the plans for the new structure involved turning it into a hotel named the "Saginaw Tavern," the historical society told me. Work on this stopped in 1929 with the onset of the Great Depression, as it did with so many other similar projects across Michigan that year. Again, according to the Sanborn maps I looked at, this structure was still unfinished and vacant as late as 1936.

As of June 2017, I have been told that the building is heavily decayed, and undergoing demolition.


References:
The Historical Society of Saginaw County
Pioneer Directory and Business Advertiser (for 1866 and 1867)
http://www.urbanplanet.org/forums/index.php/topic/12928-abandoned-building-of-mystery/
History of Saginaw County: From the Year 1819 Down to the Present Time, by Truman B. Fox, p. 53
PureSaginaw.com City Scenes
http://www.mlive.com/news/saginaw/index.ssf/2017/06/landmark_building_with_falling.html#incart_river_home
National Parking Association Newsletter, Volumes 16-19, 1968
http://www.city-data.com/saginaw-county-mi/S/S-Water-Street-1.html
http://recyclesaginawmi.blogspot.com/2010/02/assets-part-i.html