Return to Part 13
Day 8.
I woke us shortly after daybreak to get back on the road. I stepped out the door of our roadside motel near Manistique to see a flurry of flakes attacking from Lake Michigan, which just so happened to be immediately across the street. Laughing, I yanked the curtains open and yelled to Navi, “Hey guess what the weather is like?” He was not amused.

Our plan for today was to head downstate and make it to Muskegon for the night. That is definitely not the most direct way back home, but Navi had said he had always wanted to check out west Michigan, and since we had about one extra day on the itinerary still, I had no problem with doing this up. It’d been a minute since I had been to Muskegon anyway. More like six years. On the way we would hopefully stop in Traverse City, Elberta, Cadillac, Marlborough, and Newaygo.

I can’t remember why exactly we went to Traverse City, but it was probably because Navi had never been there. Anyway, the obvious attraction is still the asylum, and he wanted to at least grab a beer in the fancy restaurant in the basement of the male wing, even if we didn’t sneak into anything. 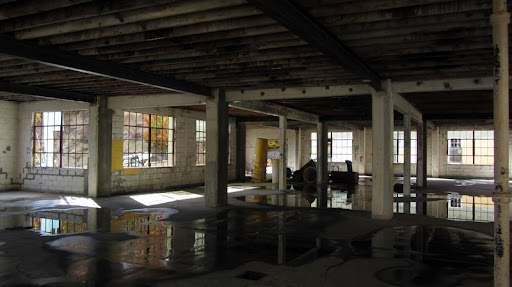 But hey, we did anyway! 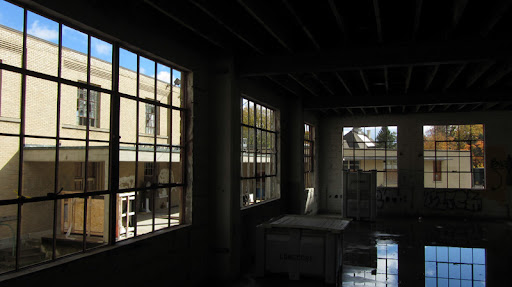 This is the interior of the TV Repair Shop, one of the few buildings I had never been in before. It apparently had been recently stripped out to accommodate an impending renovation? I couldn’t believe the increased amount of traffic swarming all over this place since my last visit; people were walking all over the place and hardly a single building was left still abandoned.

The Laundry Building, where I had first cracked my way into the abandoned complex eight years ago was now a glitzy, thriving wine bar or something, with well-dressed people thronging it (all of whom probably had those "M-22" stickers on their car). Navi went in to use the bathroom while I sat outside marveling in disbelief at the changes. The balmy autumn weather here was quite more pleasant than the apparent onset of winter we had left behind in the Yoopee.

We did find a very enticing tunnel lid in here however… 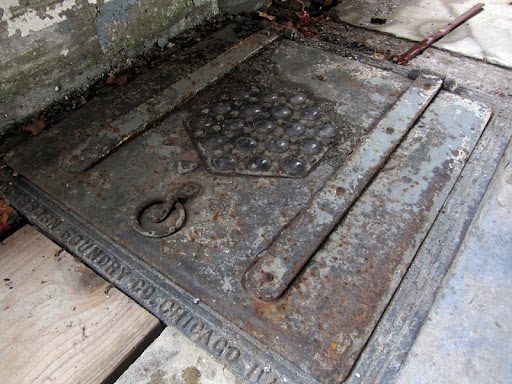 I hopped down in, and sure enough, it was tunnel access, but now blocked off. 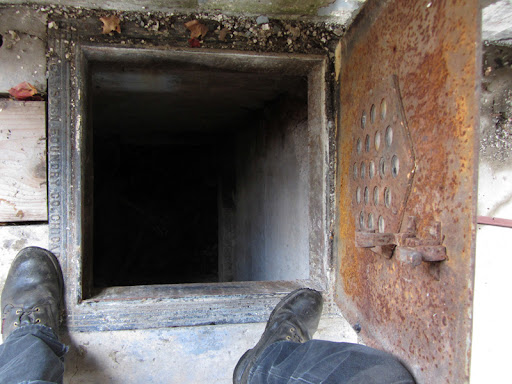 This was the last blighted portion of the once silent complex. 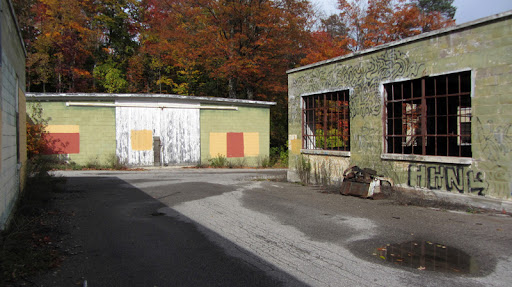 A much different view from when I took this same picture in 2004: 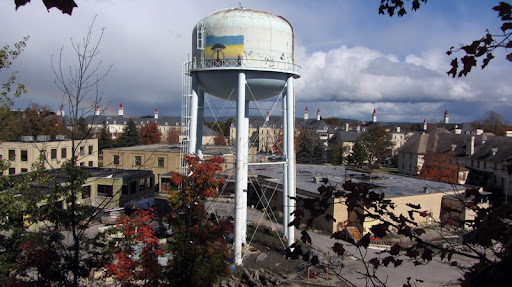 Having drunk our obligatory beer at the basement bar, we now headed south to the Point Betsie Light to find that the winter weather was still very much on our tail. Snow squalls were buffeting this duney point, and stirring up Lake Michigan into a decent fury. 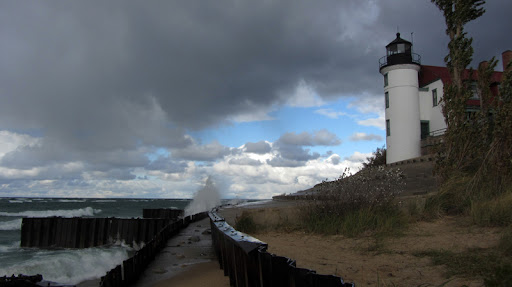 I tried getting pics of the waves shooting over the breakwall but my hands were too cold within seconds. Navi soon agreed it was time to get back in the warm truck. We continued to Frankfort, where there was another lighthouse to check off.

This time I put on my raingear and we attempted to macho our way out onto the breakwall to see how far we could get. Waves again were washing high over the sides, but I wanted to see how long I could last. 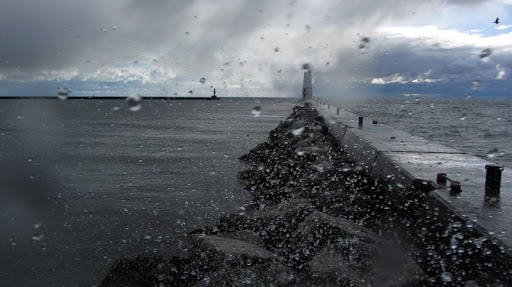 Navi got soaked almost immediately, and my poncho threatened to turn me into a human kite. The cold was like a knife.

The breakwall is actually a tunnel inside, for the lightkeeper to access the tower without having to put up with shit like this. As you can see we didn’t get very far. We ran back to the car already frozen stiff after just a couple minutes. 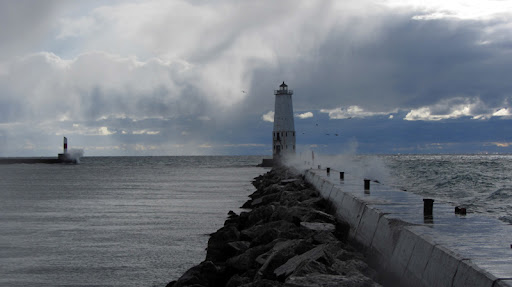 Believe it or not, Lake Michigan used to be home to an infamous pirate once, who in fact hung out quite a bit in Frankfort. An article in Michigan History Magazine by Dr. Richard Boyd confirms that one Captain Dan Seavey once held the ports of that lake in his slimy grip for many years.

After being encouraged by Frederick Pabst (yes, that Pabst) to invest in Alaskan mining, he sold his Milwaukee saloon, left his wife, and joined the Klondike Gold Rush. Seavey lost his ass on that deal however, eventually making his way back to Escanaba by 1900, penniless, before bouncing around various other locales in Michigan. He dabbled in marine transporting, trapping, logging, prizefighting, smuggling, poaching, bootlegging, and pimping.

“Roaring” Dan Seavey was a notorious barroom brawler. His most famous bareknuckle prizefight as a matter of fact occurred right here in Frankfort in the winter of 1904, in a circle on the ice of the harbor. Another more legendary tale is that he used to keep a flour sack full of skulls he pillaged from an Indian burial mound “in the wilds of the north.” Seavey allegedly used to place a skull on the bar next to unsuspecting drunks at a saloon in Frankfort, who would run away in fear when they finally noticed it, leaving their drink unattended. Frankfort was also the location of one of the bordellos to which he supplied prostitutes.

Seavey was also a good con man. The horseracing business was booming in Chicago at that time, and was bolstered by some thoroughbred owners who apparently believed that a very special “marsh hay”—coincidentally enough found only in far-away Delta County, Michigan, of course—brought enhanced stamina to their horses. Captain Seavey was more than happy to provide boatloads of this “rare,” “exotic” hay…for a very handsome price. Worse yet, he was a moon-cusser, or “ghoul;” someone who tampered with harbor lights at night to lead ships aground, then loot their holds and kill their crew.

Seavey may have been best known for the floating brothel he operated on his two-masted schooner, Wanderer. He often sailed from port to port along upper Michigan’s shores, especially on paydays when the lumberjacks and sailors were looking to blow their wages on partying. One such port was the now-in-ruins Fayette. Among his other nefarious activities, Seavey was reported to have abducted women for sale into Chicago prostitution rings, and conducted mass poaching of venison on the Beaver and Fox Islands in Lake Michigan. Well, Seavey ran into another “operation” called Booth Fisheries, who wanted to muscle in on this business of his. Roaring Dan put a stop to this however, allegedly by firing his cannon on one of their ships, sinking it.

The episode that brought him the most infamy however was when he hijacked the loaded lumber schooner Nellie Johnson from port in Grand Haven, Michigan in 1908, intending to flip its valuable cedar cargo. He and two mates successfully drank the Nellie’s captain and crew into submission before tossing them overboard, but then surprisingly failed to find a buyer to hock the timber to on the Chicago black market. Seavey retreated back into the lake to look for other potential buyers, but it wasn’t long before the federal revenue cutter Tuscarora was sent out to bring him to justice once the Nellie Johnson’s duped owner came to his senses.

The Tuscarora began checking every port in west Michigan, looking for Captain Seavey. According to another, less reputable source, Seavey led the Tuscarora on a wild cat-and-mouse chase all through the Beaver Islands, but finally gave the revenuers the slip that night by shooting out a buoy light with his revolver, and placing a fake light atop a beer barrel in a different spot, bamboozling the Tuscarora into running aground. Supposedly the Tuscarora then fired a broadside at Seavey, but he was already out of range.

Seavey was finally narc’d out by the lightkeepers at Frankfort, who telephoned sighting the stolen Nellie when he hid her up a nearby river. The Tuscarora then stopped in Manistee to refuel and waited to sail to Frankfort until the cover of night. She arrived in Frankfort at dawn, at which time Seavey’s Wanderer was spotted tearing out of the harbor at full sail. The Tuscarora gave chase, and even though she was reputed to be the fastest ship on the Great Lakes, she could not overtake the Wanderer—allegedly burning the paint off her smokestack and boilers in the attempt. Finally the captain of the Tuscarora was forced to end the encounter by putting a cannonball into the Wanderer’s side. Armed revenuers then boarded her and placed Roaring Dan Seavey in irons.

At least, that was the story the papers printed—which had by this time become national news. The Tuscarora’s log however, states that no cannon was fired, and Seavey submitted voluntarily. He was arraigned on “mutiny and sedition on the high seas,” but a grand jury somehow failed to convict him, and he was set free. Transcripts of the court proceedings supposedly no longer exist to explain these discrepancies, but why let the truth get in the way of a great story?

One theory on why Seavey was released was because he was offered a job as a revenuer himself. He had been a deputy marshal for the Bureau of Indian Affairs, chasing bootleggers on reservation lands earlier in his life, so it is plausible he may have been given a plea deal if he agreed to use his nefarious knowledge and skills to work for the government again catching other pirates. Great Lakes piracy was actually pretty popular during the lumber era; the USS Michigan—the Navy’s first iron-hulled warship—patrolled the Great Lakes for this very reason. This was the same USS Michigan that I wrote about arresting King Strang’s assassin at Beaver Island, and mentioned in my Brodhead Armory post. The USS Michigan was even rammed in 1853 on Lake Huron by timber pirates.