Return to Part 14
Day 8, continued.
Our target in the town of Frankfort was the ruin of the “Elberta Furnace,” on the other side of Betsie Lake from where we were. Getting in was a bit of a trick. There was a public playground immediately across from it, so we decided that a swift hop over the fence in plain view would be less preferable than a circuitous approach from the woods behind it. 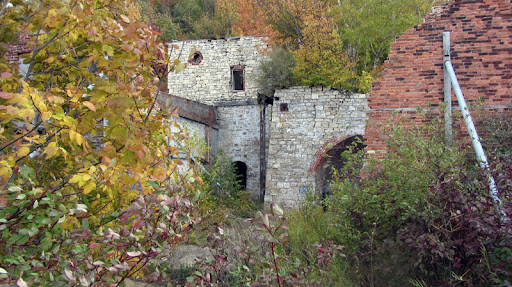 This proved genius at first, as we quickly found a way under the fence, but the rest of the push through the nasty overgrowth to get to the structure ended up being a painfully difficult flog that made us seriously consider going back and starting over. Finally, at great expense, we made our way into the rear of the ruined structures. 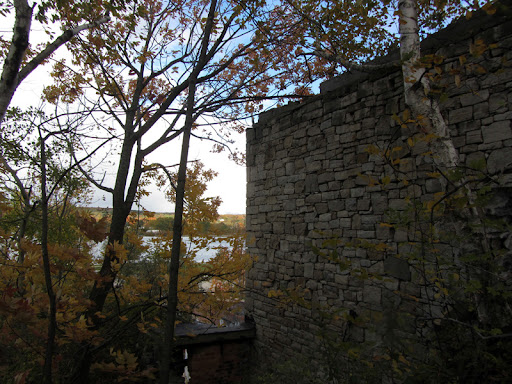 The village of Elberta's website tells some of the history of this site. It excerpts the book History of Elberta, by Allen B. Blacklock, which says that this place was an old iron smelting furnace, one of the many that operated once along the shores of Lake Michigan in the mid-1800s, turning freshly mined Yoopee iron ore into pig iron to feed the bellies of big city steel mills of the lower lakes. 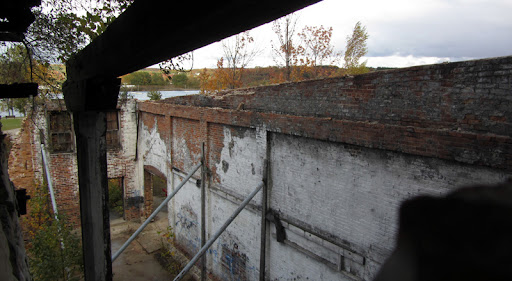 The furnace actually belonged to the Frankfort Iron Works, the biggest industrial concern in Benzie County when it fired up in 1867. 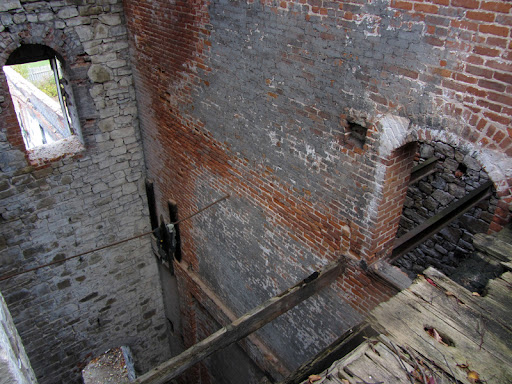 The Fayette Smelter of the Jackson Iron Co. was another such pig iron furnace on Lake Michigan that I had visited once before, and I couldn't help but be reminded of it. 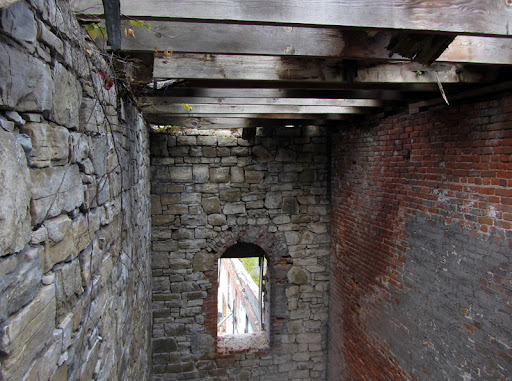 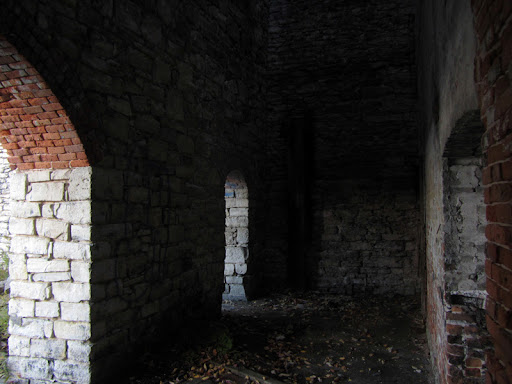 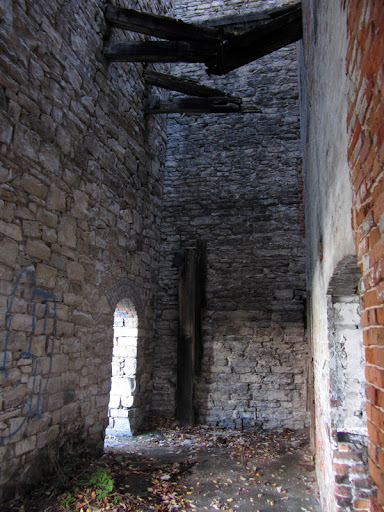 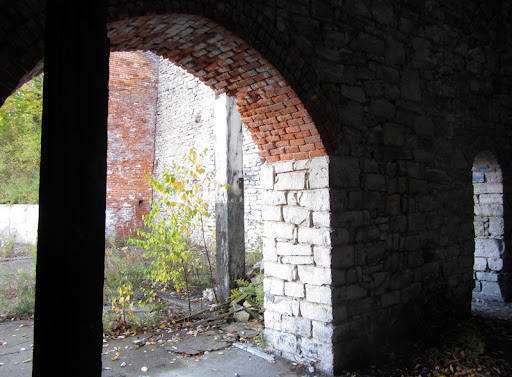 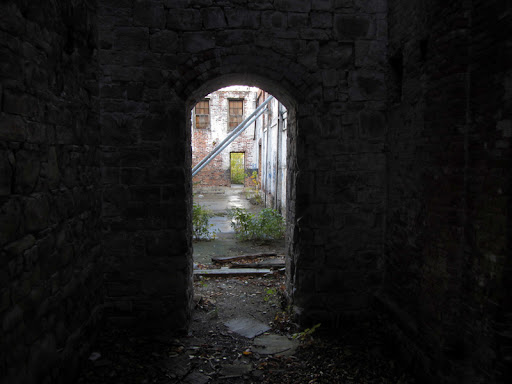 There was also an ore crusher here as well, and this iron works is where the railroad started from, running inland, where it became part of the Toledo, Ann Arbor & Northern Michigan RR (later known as the Ann Arbor RR). 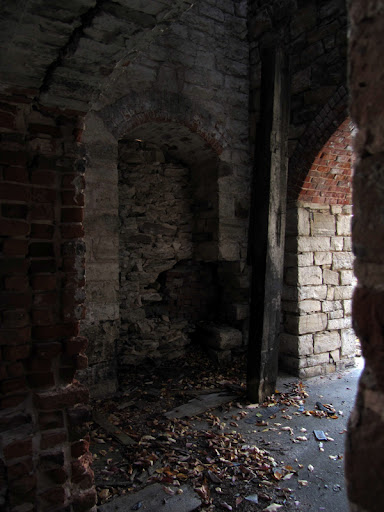 The Frankfort Iron Works ceased operations in 1883, and in 1892 the buildings were converted into that railroad’s roundhouse and machine shops. 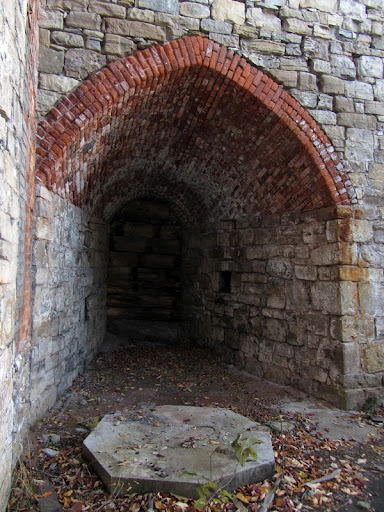 Additional warehouses and elevators were built then as well, to hold flour for shipment over rail. These were demolished in 1916. 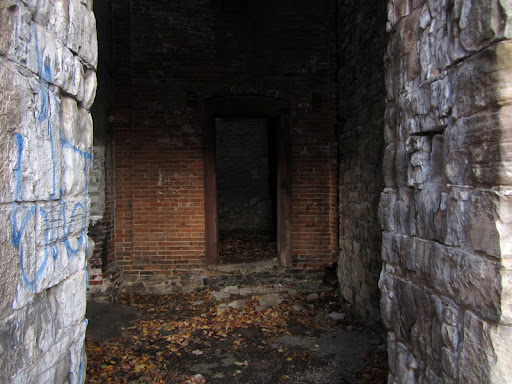 This is the literal furnace itself, which as you can see has been shortened, while the rest of the complex was added-on around it: 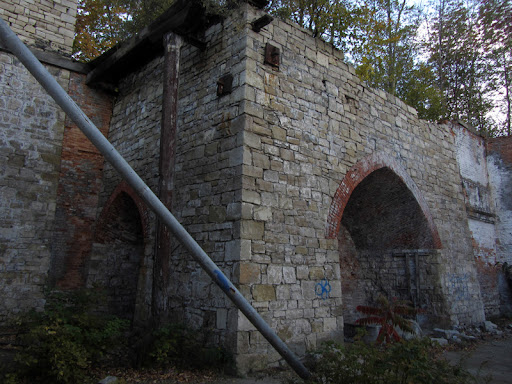 In 1925, a coaling plant was built here that fed the many ferryboats that once crisscrossed Lake Michigan in steam’s heyday. Steam gave way to diesel in the 1950s and the coal plant was demolished. 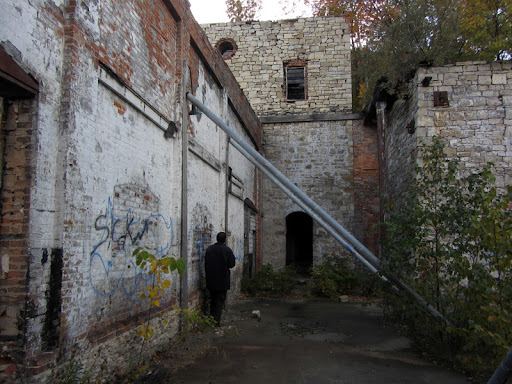 As you can see, the village of Elberta cares to perhaps preserve this attractive historical site of theirs, as the walls are all braced up. 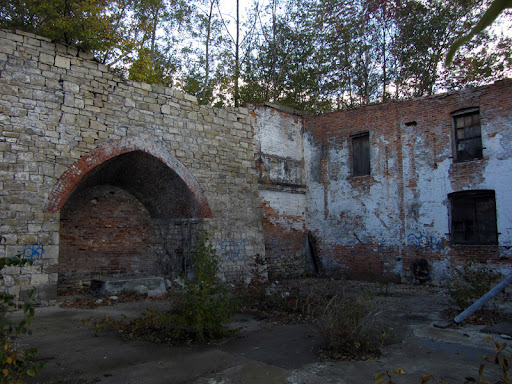 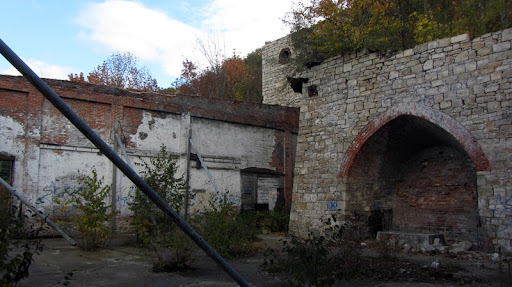 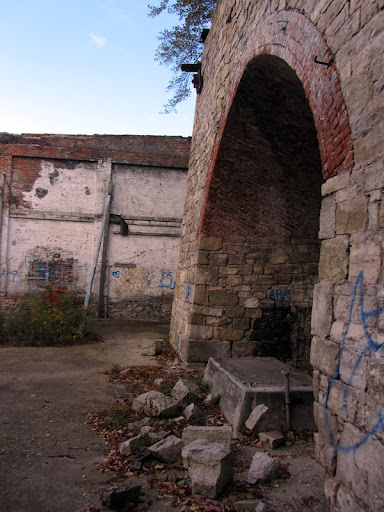 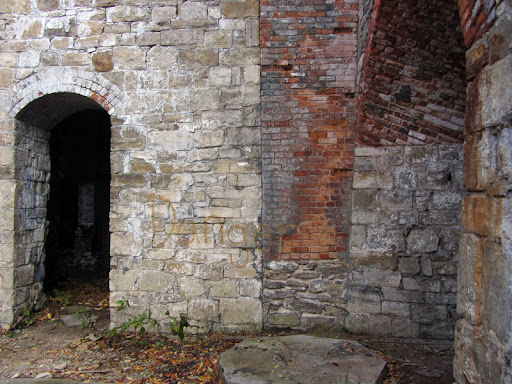 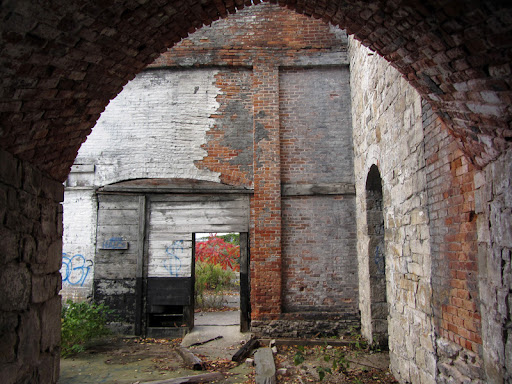 Now that we had covered this small ruin adequately, it was time to move on, as a cold rain was threatening. 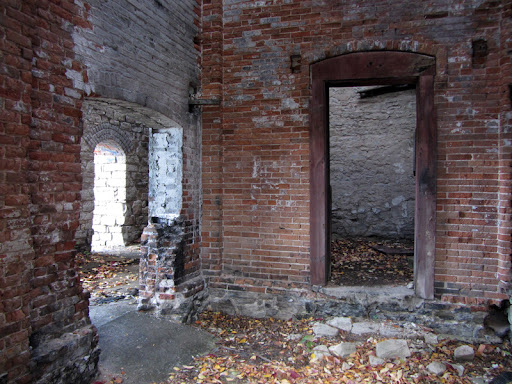 Soon we were passing a very intriguing dock ruin that I had not counted on, near a fancy lakeside restaurant. 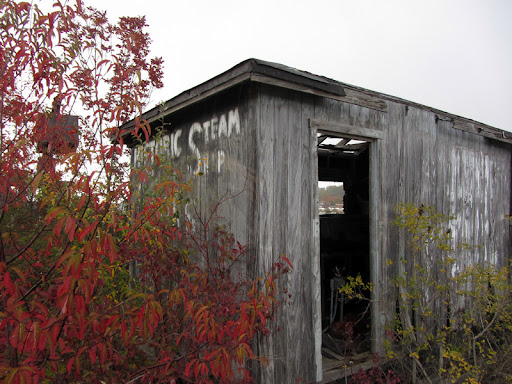 Even though it was now fully raining, I felt it was old-school-cool enough to merit a couple photos. Here, the Frankfort Lighthouse is visible again in the extreme distance: 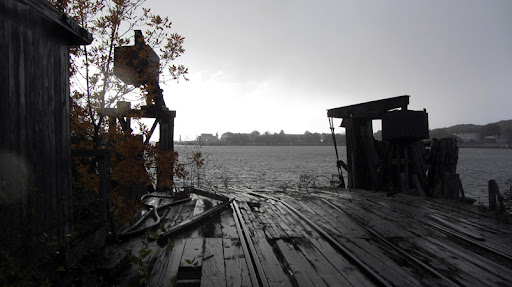 This place was obviously a location for railcars loaded with either iron ore or flour to join up with the Ann Arbor RR after coming across Lake Michigan. 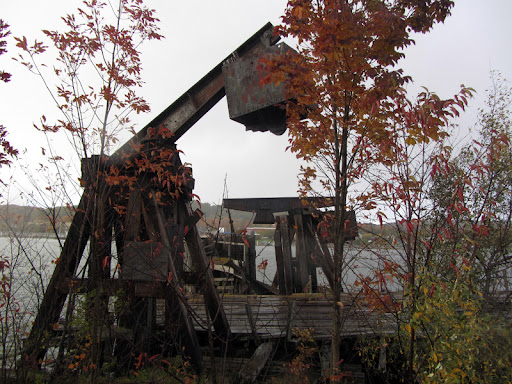 A state of Michigan historical marker nearby declared that this was in fact the very first use of car-ferries on such a large open body of water in the world; Lake Michigan was a major obstacle to industry, as raw materials would otherwise have to be shipped by rail for hundreds and hundreds of miles around the big lake, at great expense. 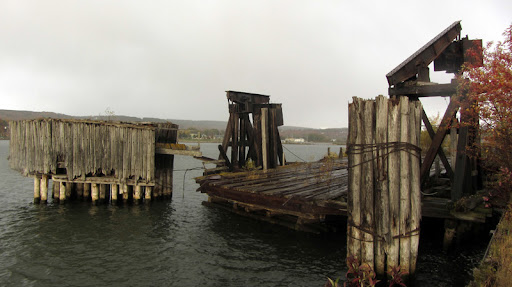 Of course as times changed there were also passenger lines as well, three of which still operate across the lake today (Muskegon, Manistee, and Ludington). 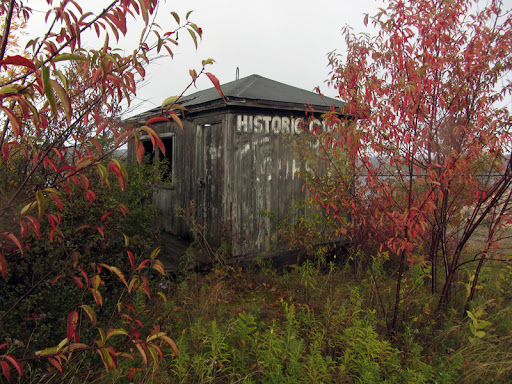 Manistee was in fact where we were headed next. There I was surprised to find this unexpected, apparently disused beast: 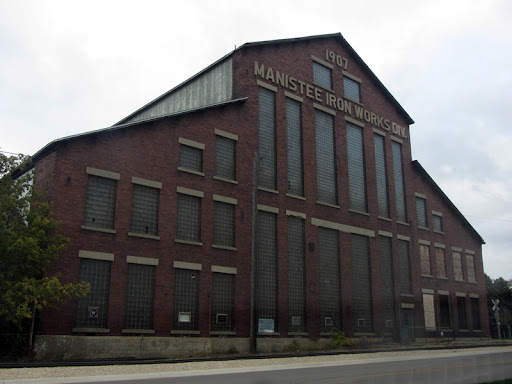 Unfortunately for us, it showed no signs of weakness. 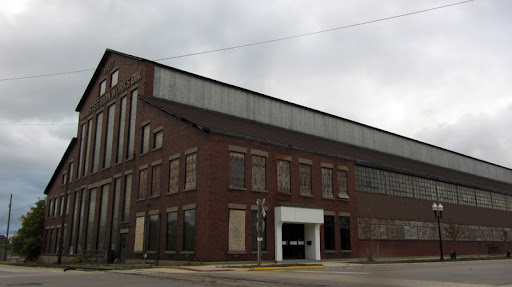 I was also reminded of how beautiful a city Manistee actually is. West Michigan really is a great place overall.

I did not take any further photos on this trip, as it was night by the time we got to Muskegon, and all we did was eat at a bar and return to Detroit (via a quick recon stop in Grand Rapids). But a couple months later Navi and I made a return trip to West Michigan based on new knowledge that an old forgotten ship graveyard in Grand Haven had become uncovered, due to the recently lowered lake levels, and the fact that Navi still had yet to make a proper explore of Muskegon.