From Silver Mountain we took truck trails through mystically beautiful old-growth forests up toward Laird Road, the area where I thought the German P.O.W. camp was, but for whatever reason we skipped it, probably because I really was not sure where it was. And there was nothing left of it anyway, except for a lone chimneystack. 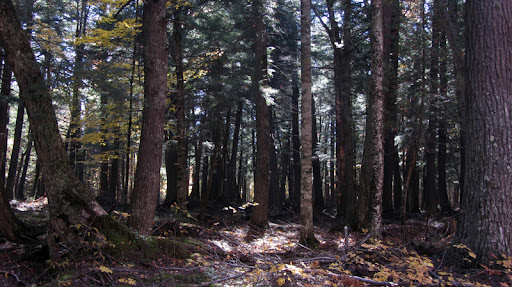 We ended up heading toward Nisula and popping out of the woods, and then up M-26 for another follow-up run at the King Philip Stamp Mill in Winona. 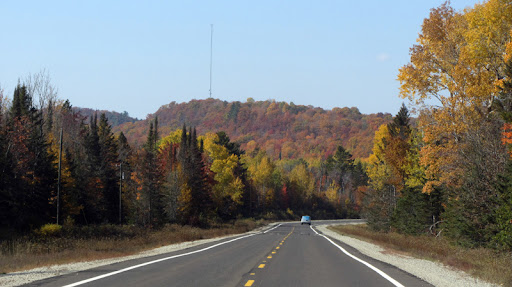 We were now in Copper Country; Winona is at the very base of the Keweenaw Peninsula. Like Silver Mountain, this was another mission that I had tried and failed at during my 2011 expedition. But I had lately realized that Google Maps had updated their imagery, making it easy for me to pinpoint its location. No failure this time.

I was almost certain it was on private land, and that a stealth approach would be necessary. The Bill Nichols Trail cut through the area close enough to be convenient. We could park somewhere along there within a half mile of the mill and bushwhack through the woods easily enough, I reckoned. The hike seemed a lot longer than that, and some of the terrain we went over was troublesome. At times we bogged down in the overgrowth, but at others we were walking in open areas of mature maples, and of course everything was perfectly, utterly yellow.

Peak color in the Yoopee is a wonderful thing. Navi was slightly less enthused I could tell, his cold now visibly wearing him down to the point where he almost stayed behind in the car. I’m glad he decided to tough it out however. Especially since I needed him to operate that silly gizmodad GPS-majig of his to navigate us through the blinding sea of yellow. As usual however, I still cross checked it against my compass as we skirted around wide ponds and wetlands. When we came across a former railroad right-of-way, and this odd trench in the forest floor, I knew we were close: 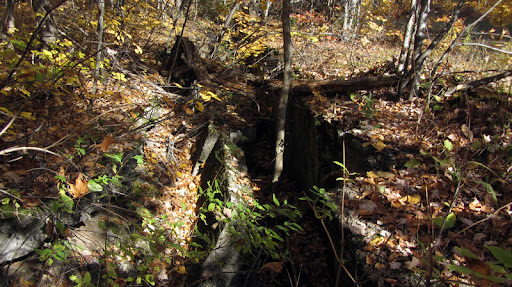 Suddenly, we found ourselves on a cliff overlooking a massive sprawling ruin, couched amongst a bounteous trove of fluttering gold coins. 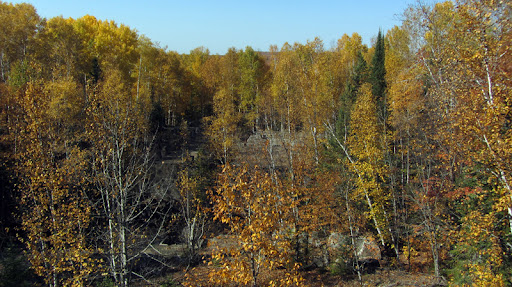 We still had seen no signs that warned of trespass, but nonetheless I was anxious to get off the trail and stay cloaked in the tree cover, so we snapped a couple pics and headed down the steep gravelly incline to the mill’s behemoth ruin. 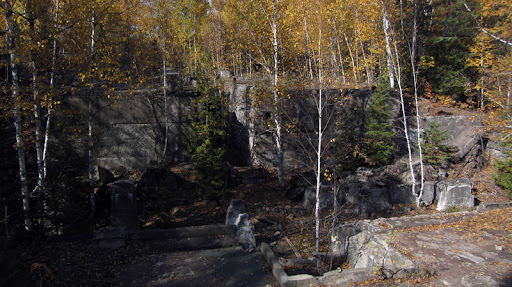 Navi had been on guard as he mentioned in his own writeup, about the strange cackling sounds we had been hearing in the woods for most of our hike, but I had been quick to dismiss it as “some bird,” having heard that call many times in the Yoopee.

It was a partridge call, but little did I know it was being artificially made by a partridge hunter, not an actual partridge. Navi the bird-whisperer’s trained ears noted something not quite right about it, but he didn’t directly voice these apprehensions to me. 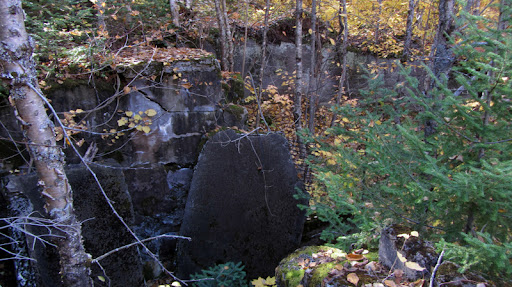 I had taken precautions, just in case of a worst-case scenario entanglement with psycho-gun-wielding-property-owner, but little did we know, there was indeed someone out there watching our every move. This would be a lesson in Yoopee exploration.

We were now fully engaged with our target however, and most of our attention focused on that. 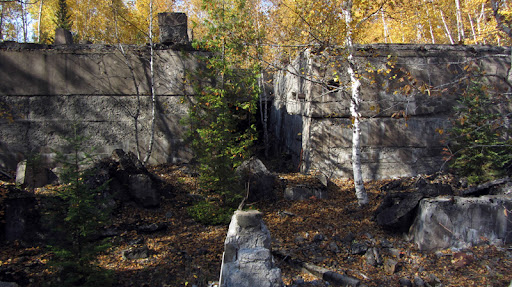 According to Copper Country scholar Lawrence J. Molloy, the King Phillip Mine (or Philip; I have seen it spelled both ways) was located just about a mile south of the older Winona Mine, which was organized in 1864 and like so many others was begun by tracing the marks of the ancient Indian pits. 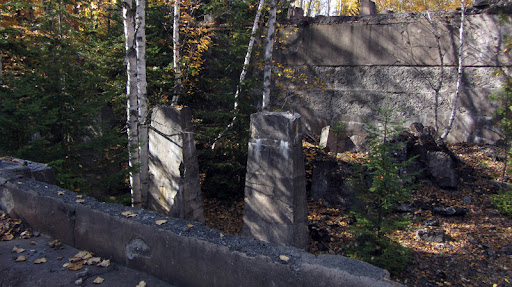 King Philip II of Spain reigned during the latter 1500s, after the New World had been “discovered” by Columbus. Philip II funded Spain’s overseas colonial activities largely based on the metal riches found in the mines of the Americas.

Undoubtedly Philip II was the namesake of this Keweenaw copper mine, and I have to wonder if his imperial majesty ever came into direct contact with wealth mined from the ancient pits that would eventually become a mine bearing his name. 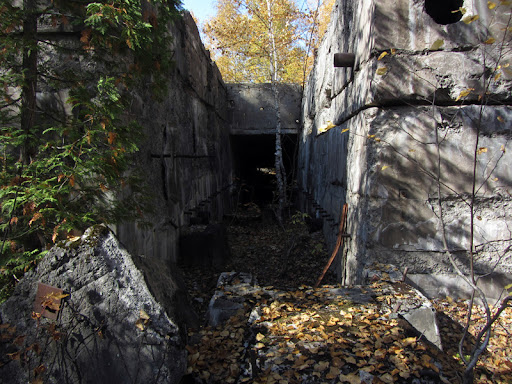 Looking back up the cliff we had come from: 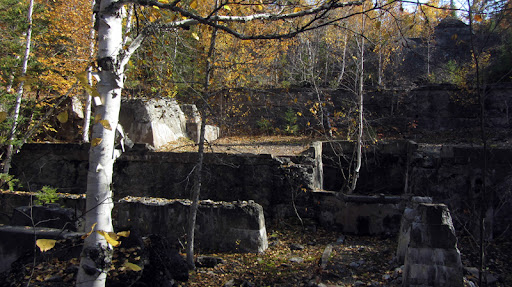 This was good stuff; one of the better ruin sites in the Keweenaw, and virtually unknown thanks to its being located on private land, in a very close-knit semi-ghost town, tucked back from view of any road. 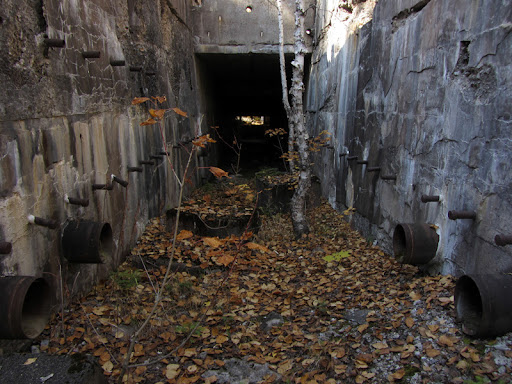 According to Mindat.org, the Winona Mining Co. eventually opened four shafts here in Winona, and the company reorganized as the Winona Copper Co. in 1898, after which it became more profitable, Molloy says. In 1911, the Winona merged with the King Phillip Mining Co. 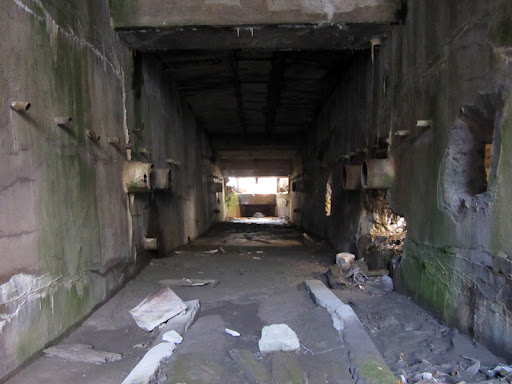 Work at the King Phillip Mine was "sporadic," Mindat noted. Both mines worked the Winona Amygdaloid, which was thought to be the southern extension of the famous Isle Royale Lode. 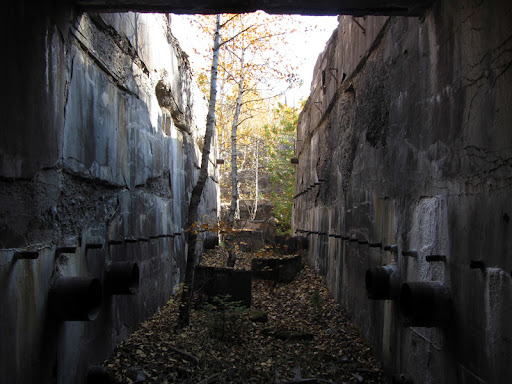 Some of the foundations of this mammoth mill were basically hollow inside: 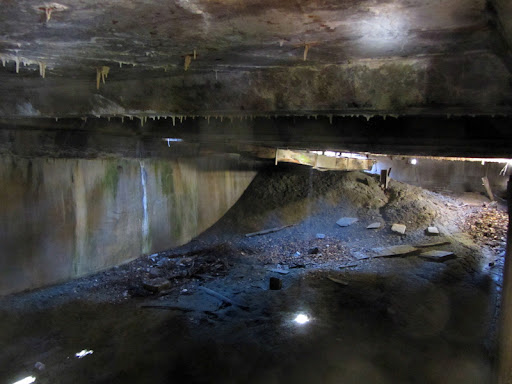 The tunnel led to this apparent drain: 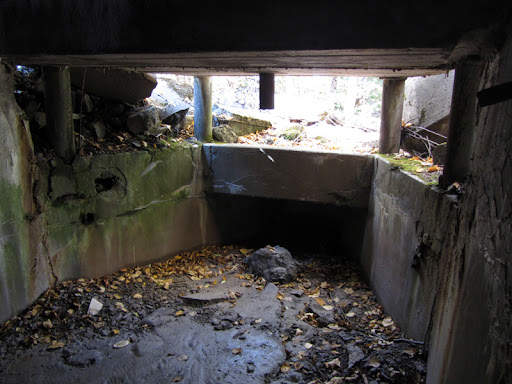 We did not go in; I think it was blocked? I do find it puzzling however that such a substantial stamp mill would have been located this deep off into the woods, far from any perceptible major water source that a mill of this size would require. The nearest water sources I can see are the Sleepy Creek, which runs through the town of Winona a mile away, and the very small Lake Winona, which is equally distant. I wonder if this tunnel was part of a pipeline system to bring water to the location? Strange.

I talked more about stamp mills in general in an older series. 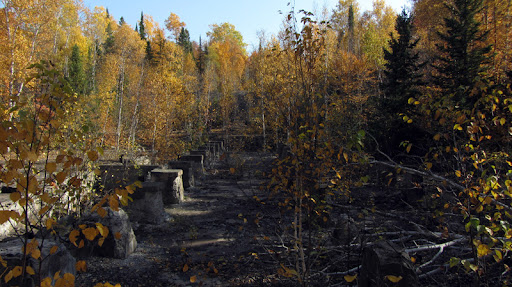 Mindat says that the mines closed permanently in 1920. Molloy's book disagrees, saying that it closed in 1923, but its best years were indeed over by 1920. 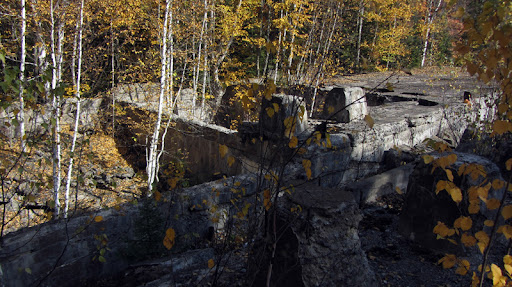 The mine produced about 17.6 million pounds of refined copper over the course of its life according to Mindat, with silver and datolite also turning up in the piles. 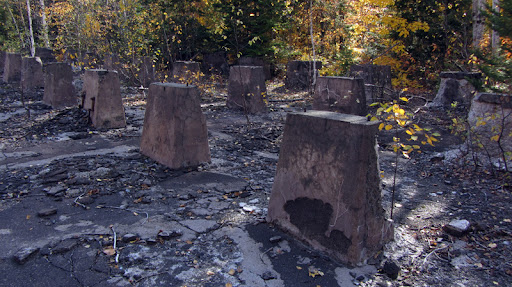 Molloy notes that the King Phillip was gone over again as late as 1969. 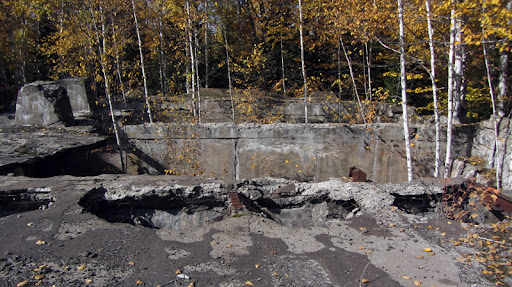 This stamp mill however was probably another victim of the scrap drives of WWII…the metal structure of the mill had been scraped off of its foundation and melted into a battleship or a bunch of tanks to fight the Axis of Evil. 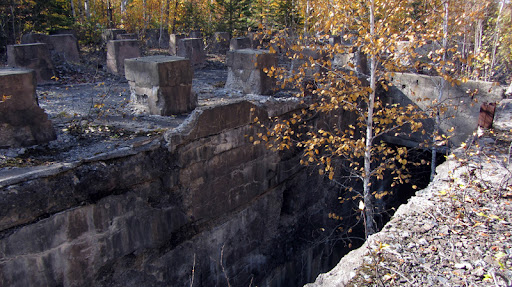 Now nature was reclaiming yet another faded bastion of the Red Metal Empire. Maybe another thousand years from now people will still explore the woods of the Keweenaw hypothesizing about the lost history of the white man’s Copper Age, just as I do about that of the ancient Anishinaabeg? 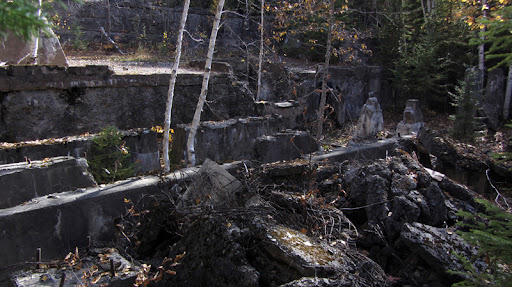 The website MiningArtifacts.org has some old photos of the Winona. 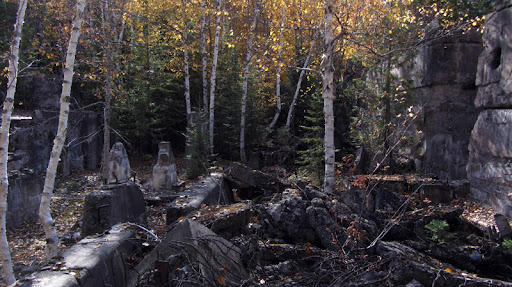 Now quite happy that I had finally deposed King Philip from his haughty copper throne of opulence, we quit the field of battle to move onward to White Pine Mine.

But as we were climbing back up the crest of the hill we had come down from and got back on the trail, I suddenly noticed movement through the yellow static of the forest--something was coming toward us. A man in a classic orange hunting vest and an old Stevens shotgun under his arm strode toward us with silent catlike steps. Uh-oh. 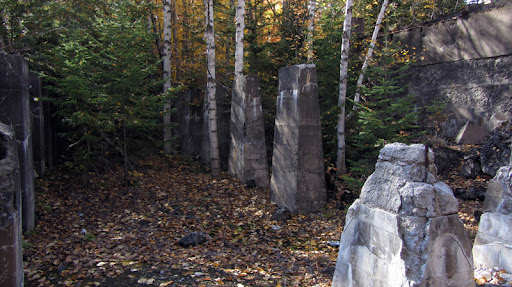 Fearing our “psycho-gun-wielding-property-owner” encounter could finally be nigh, I greeted him cheerfully, all the while preparing myself mentally for a lightning quick move if needed. This guy was the typical good ole happy-go-lucky Elmer Fudd lookalike kind of Yooper however, and we exchanged hushed (so as not to spook any game birds) pleasantries about the weather, etc., before he asked whether “yous guys” had seen any partridge around today. I told him no, but we had certainly heard plenty of them. He thanked me and we wished each other a pleasant day. What I slowly realized was that the partridge calls I had been hearing all day came from the call hanging around his neck. We strode away out of sight of each other before making our dive back into the woods.

This was where Navi and I discussed the likelihood that this was in fact the landowner or a relative thereof, and that he may have been observing us ever since we left the truck to make sure we weren’t poachers or vandals. Harmless as these stereotypical Yoopers may seem, they are not to be crossed. Many private landowners do not post signs on their property line, and will let the public stray onto their land as is Yoopee tradition, with the unspoken mutual understanding that it is treated with respect. He had us pegged as harmless, so there was no need for any drama. This is an old-fashioned utopian way of life, a holdover from the frontier days. 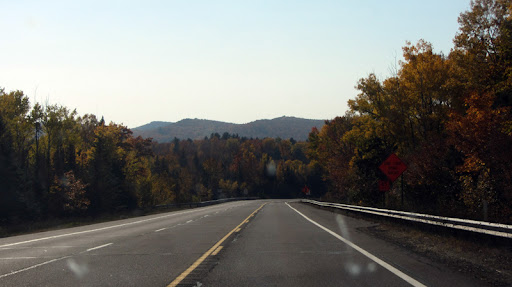 Unfortunately, outside the Yoopee, time has moved on and things don’t quite work that way anymore, which is part of where the disdain that Yoopers feel toward the “downstate” way of life comes into play. If only the rest of us could be more peace loving, like the idyllic Yoopee and its denizens. I kept thinking to myself however that I was positive I had been hearing that same partridge call for the past couple days, not just here.