Very shortly after our autumn trip to the Huron Mountains and west Michigan, Navi and I made a return trip to west Michigan (now apparently known as the “Gold Coast” in the tourism world). We went based on new knowledge that an old forgotten ship graveyard in Grand Haven had become uncovered, due to the recently lowered lake levels, and the fact that Navi still had yet to make a proper explore of Muskegon. This was to be a two-day trip, staying overnight in Muskegon, and stopping for a bit in Saginaw. I made the rounds of the usual Saginese places for Navi’s benefit, and since I hadn’t been here in awhile. Not much was open to us however.

Our next move however was to see about a quick run of the ghost town of Idlewild, which was of interest to Navi, and since it was near the Marlborough Ruins. A stop in Mount Pleasant delayed us a little too long, and by the time we got to Lake County it was already dark and freezing. We also managed to get my truck stuck in a ditch in Idlewild, thanks to the freshly fallen dusting of waxy snow over an icy road. After spending quite a few minutes of exhausting labor, we had the truck freed. Navi got a picture of the Lake County Courthouse and we continued straight to Muskegon to get a crust-house motel room to lick our wounds (get drunk) from this non-start.

The morning was a little better, if bitterly cold. Navi still seemed to have the same cold he had caught during our last trip. We wandered the city of Muskegon, first to the waterfront, because there were lighthouses to see, and an old WWII submarine named the USS Silversides. It’s a museum now, and as a Boy Scout I had once camped overnight on board with my troop, which was crazy. It took us a bit to find where she was docked, and in the meantime we hiked some nice dunes overlooking Lake Michigan as it snowed. I got some cardboard-box sledding in too.

Finally we found the old Silversides. Wow, what a blast from the past. Little did I know until just now when I googled it, the Silversides was one of the U.S. Navy’s most illustrious ships. The Silversides engaged in all kinds of scraps and great escapes, sinking a confirmed 23 enemy ships in WWII, amounting to 90,080 total tonnage, the second most of any submarine in US naval history.

Nearby were Navi’s lighthouse checkboxes:

We decided that even though the "RealTalk Temperature" was a bazillion degrees below zero, a leisurely stroll out on the breakwall would be nice.

Okay that’s enough of that silliness…time to get back to the car and warm up. There was a low-probability target out on Muskegon Lake that looked like it might be worth a look.

From above it looked like a paper mill, and that assumption turned out to be correct. Better yet, it was no longer operating, but to our chagrin it was under demolition this very minute.

Sometimes that can be a good thing as far as getting in, but we saw no salient opportunities this time, and sadly were forced to move on.

For what it’s worth this was the Central Paper Co., who had begun operations in 1900, and was the first paper mill in the U.S. to use the sulfate process. In the old days Muskegon was one of the great lumber capitols of the north, with logs floated downriver to Lake Michigan where they were sawn and shipped to cities like Boston, New York, Detroit, and the like, wherever society’s elite were building fancy mansions for themselves, driving up the cost of virgin Michigan pine, maple, and oak. Naturally a city such as this also fell into the paper-making business as well, though that industry was mostly centered to the south, at Kalamazoo.

After this we also cruised by the old Shaw-Walker Furniture Co. plant, to see that it was basically all renovated now.

The Michigan Steel Co.’s one vacant building was surprisingly still there (right), but not quite juicy enough for us to justify going out into the cold however.

Through-the-dirty-windshield exteriors will have to suffice. So far this trip was not exactly blowing the covers off the record books like our last one.

Muskegon thankfully had absolutely no lack of excellent architecture for our eyes to feast upon however. Here I believe is the old Hackley School.

Once again, laziness prevailed and I didn’t even tap my brakes to get that shot. Jesus it was cold that day...f%$#@!

One standout in downtown Muskegon is the old Amazon Knitting Co. Mill, designed in the New England style:

If you guessed “lofts,” you’re correct. Oh wait—I hadn’t asked the question yet.

It’s worth noting that the art deco Muskegon Water & Sewage plant, which sat wide-open and in ruins for many years was also demolished by the time we got there. I believe there were a couple other things we checked out but came up snake eyes as well. Wow, this trip was beginning to blow. Time to move on to a different city, and a different county: Grand Haven, the seat of Ottawa County.

One of the main things that brought me out this way was I wanted to see something that had become all the rage lately with photographers. With the much talked-about lake levels being at a drastic low point this year, the many problems associated with that brought on a lot of grumbling from a lot of quarters, but for archaeology it has been nothing but a boon.

Previously submerged water caves containing ancient aboriginal pictograms have surfaced, and shallow-water shipwrecks have been exposed in many places as well, most notably at Grand Haven. A newspaper article with some flashy photos promised a veritable “ship graveyard” once forgotten, was now laid bare for all to see. How could we not go see that?

Well it wasn’t as photogenic as we were hoping for, and I was only able to find one of the shipwrecks, but at least there was something. I was even able to walk out on it:

Grand Haven sits at the mouth of the mighty Grand River, as it flows through a couple small harbors before finally dumping out into Lake Michigan. This part of it served as a graveyard for tired old lake boats.

An archaic wooden-hulled beast, this old girl was known as the Aurora. She was once the largest, and most powerful wooden-hulled steamer on the Great Lakes, at 290 feet long. I hadn’t expected to find such a pedigreed vessel in a place like this, half buried in mud; on the contrary, I expected this to be merely a dumping ground for old nags.

The 3,000-ton steamer Aurora was built in 1887 by the Aurora Mining Co. of Milwaukee and embarked on a long and productive career. She also had masts for sails. Though she caught fire and burned down to her waterline in 1898 at Boblo Island, she was rebuilt as a barge and by 1916 was hauling tonnage for the Morton Salt Co. By 1927 though, an economic downturn caused her to go into layup, where she stayed as the Great Depression was taking hold. In 1932 she caught fire again and burned down to the stubs you see now.

The entire wreck is not visible; subsequent erosion has the Aurora’s entire stern buried in the riverbanks, as you can see here:

There’s a historic photo of her in this MLive article.

As you can see there are no metal nails or spikes used; only wooden pegs pin the planks of the Aurora’s hull together.

Navi and I now ventured onward to the lighthouse to find an oddly placid Lake Michigan.

We had lunch and beers, while deciding how to end this trip. We could either continue south to Holland to investigate something there, or start towards home and check out Grand Rapids a little better on the way. We chose Grand Rapids.

Which is not all that encouraging since GR is a city that I have historically come up empty with on any kind of exploring, time and time again. But again, like Muskegon, at least there were a lot of pretty old buildings to look at.

In Detroit everything is all about the car. In Grand Rapids, it’s all about furniture. Back in our grandparents’ generation (and for many before that), Grand Rapids was the center of the American furniture-making industry. Hence the nickname “Furniture City.”

As it turns out, McInerney made seats for Cadillac and Hudson automobiles. Doesn’t get much more “Michigan” than that.

Some alley where some scene from some movie was filmed:

I don’t even remember the movie. And here is your standard abandoned Grand Rapids building; clean and sparkly with not even one single hint of weakness. Translation: you ain’t gettin in.

So yeah we didn’t get in there. Or the Hotel Rowe. Which I’ve been scouting for literally five years.

And everything else we scoped out ended up not being abandoned. Maybe someday I’ll be able to say I successfully explored something in Grand Rapids, but probably not.

We said “whatever” and hurried home, calling this trip basically a wash. Stevie Y was in town now too, so that meant partying in the D, which is much more fun than window-shopping in Kent County. 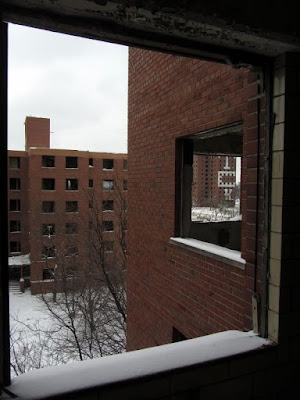 The next morning made our last-ever trip to the Brewster-Douglas Projects where we sat around and drank moonshine with Crawly and Chad, before heading down to one of our favorite bonfire spots in Delray for the night.

References:
Working for the Japanese, by Joseph J. Fucini, p. 10