Built in 1881 and located at 501 Potter Street, this old railroad depot was once known to Saginaw locals as the "Potter Street Station," though its original proper name was the Flint & Pere Marquette Railroad East Saginaw Union Station. The Late Victorian style building was even designed by the famous architect Bradford Lee Gilbert, who is credited with designing New York City’s first skyscraper in 1889. 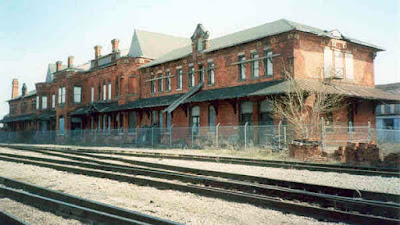 According to MichiganRailroads.com, the Flint & Pere Marquette was the first railroad to reach Saginaw (which was founded in 1816), branching up from Flint in 1859, and eventually out to Bay City and Midland (MAP). 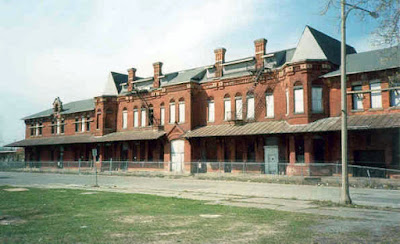 "East" Saginaw was split off from Saginaw in 1850, and there was reportedly quite a bit of rivalry between the two sides of the river back in the 19th century. By 1873 East Saginaw was merged with South Saginaw, and in 1889 all of them were combined back into "Regular" Saginaw again. 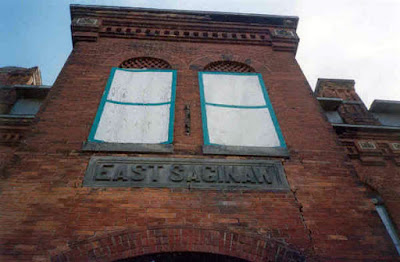 The website BradfordLeeGilbert.com features a lot of old images of the depot, and quotes some of its early history from the Oct. 25, 1881 Saginaw Daily Courier, which said that when it opened, it was the largest passenger depot in the state. It contained two baggage rooms and a restaurant, as well as separate waiting rooms for gentlemen and ladies, each with decorative cast-iron columns, 18-foot high ceilings furnished with oak wainscoting, and maple floors.

The ladies' waiting room had an open fireplace with an ornate mantle made of red terra-cotta and Philadelphia brick. A grand staircase went up to the second floor, which had offices and a boardroom for the railroad, as well as four fireproof and burglar-proof vaults. The third floor was solely for storage. 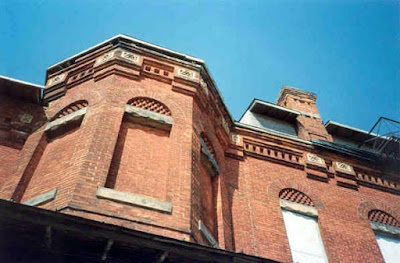 In 1964, passenger service was terminated. The rail line remained in use for freight until 1986 when the station was closed. It had already been threatened once with demolition in 1955, and again in 1988, which was when the non-profit Saginaw Depot Preservation Corporation formed and bought the depot from CSX, hoping to restore it.


It also turns out that (totally unbeknownst to me until now) this depot once caught fire and was nearly consumed in a six-alarm blaze the following year, in April 1991, that was called arson. Eerie photos of the blaze, and some interior photos can be found HERE. 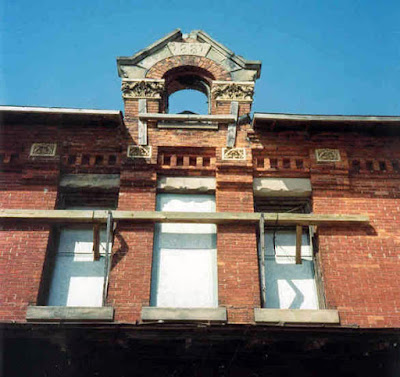 
They also had to go to court against the city to fight against them having it torn down. They won, and completely rebuilt the roof, as well as succeeded in getting the depot listed in National Historic Register of Places in 1996. Unfortunately the old clocktower that used to sit on top of the building collapsed a year later. 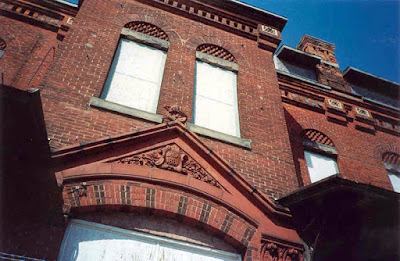 One blog says that many people claim the station is of course haunted, because well, any building that looks old and spooky must definitely be haunted. Anyway, bodies of soldiers who died "in the war" (exactly which war was not specified) were sent back home to Saginaw by train and arrived at this depot, it went on to say. It also said that a local casket maker named Richard Froeber had his shop in the depot, and would build caskets for the fallen soldiers.

That last part actually seems substantiated though, because the BradfordLeeGilbert site also mentions that the restaurant space was once used by a casket maker. 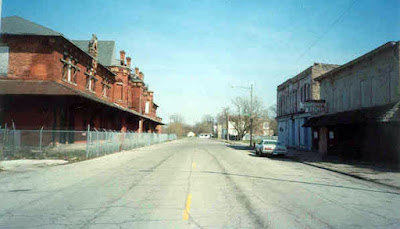 Though the area looks barren now, at the height of the Age of Steam, the neighborhood was much more built-up, and in true Saginaw style, Potter Street (though less than a half-mile long) boasted of 37 saloons.  Back then over 50 trains per day left this station, according to BradfordLeeGilbert.com. 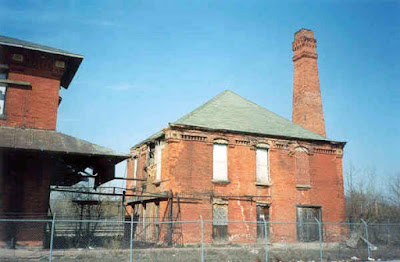 This smaller structure with the chimney was the boilerhouse for the depot. Sadly, it recently suffered a fairly catastrophic structural collapse. 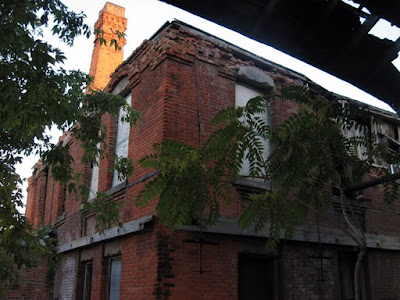 But as with any great center of transportation, its history is a reflection of the region and the time in which it is built, and is written in the footsteps of those who passed through its halls, even if only briefly (or in a pine box draped with an American flag).

A 2011 article on MLive says that this station "once welcomed Irish immigrants drawn to the region during the lumber boom, Asians seeking salt mine jobs in the 1800s and, in the next century, Southern blacks staking a claim in General Motors’ tremendous expansion." The article goes on to say that even President Hoover once arrived here in the 1930s, though for what reason is not specified. I have a hunch that speech-giving was involved however. 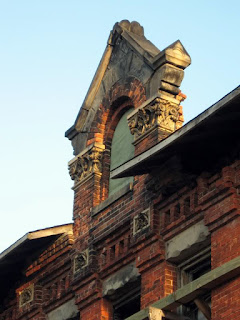 I managed to find a mousehole to stick my lens through and finally glimpse the interior of this magnificent edifice. Unfortunately, I found it remarkably...unremarkable, and did not pursue the issue any further: 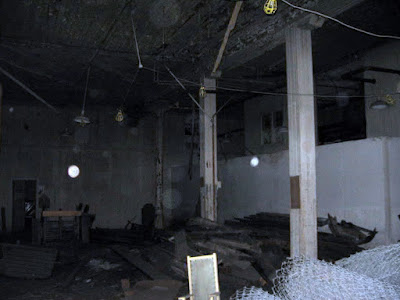 Which is unfortunate because this was merely the baggage room, and elsewhere within lay some rather stunning areas toward the front, as explained earlier. 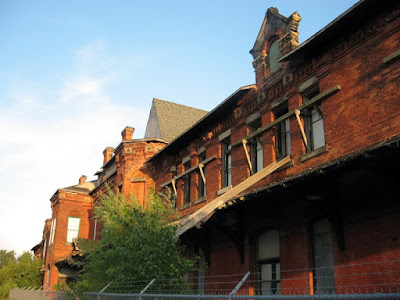 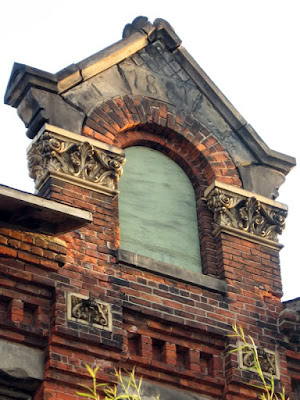 The fancy iron brackets holding up the eyebrow awning are mostly still in place: 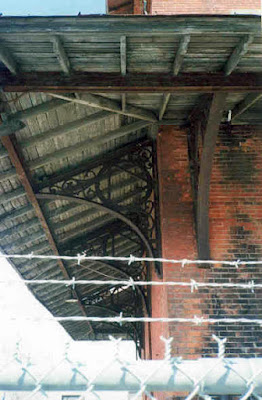 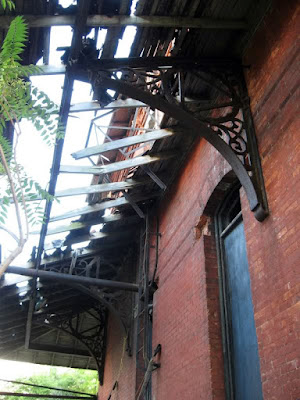 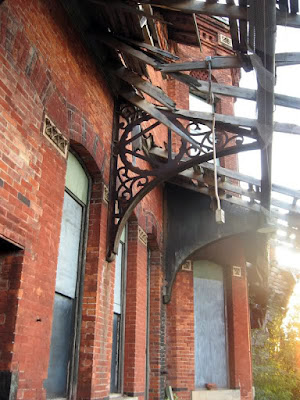 There was once a terra cotta eagle perched atop this arch, though it has since been broken off: 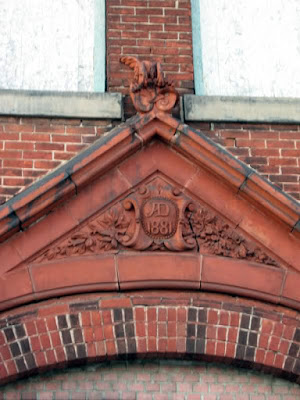 There were many other disused buildings to check out in town... 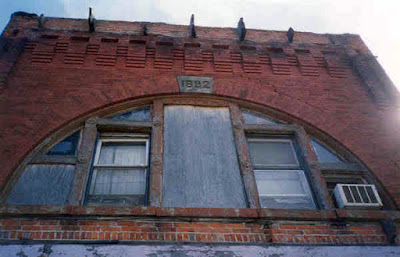 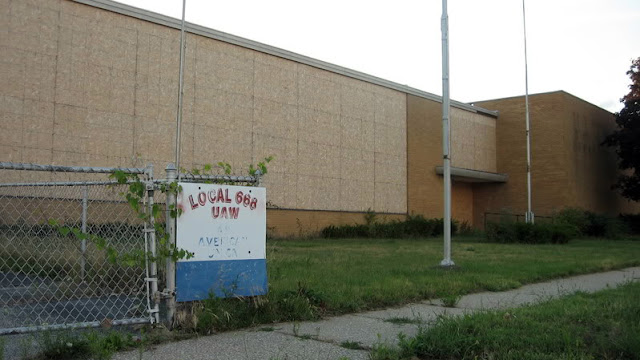 Then there was the St. Agnes School... 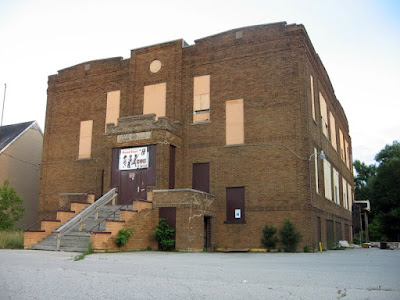 ...which I snuck into briefly, but found little of interest: 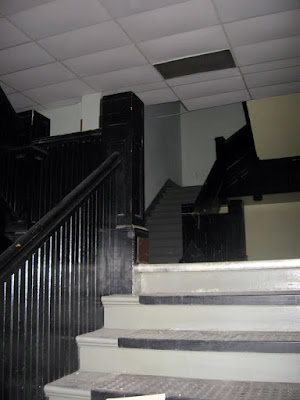 Then there was Saginaw Rock Products: 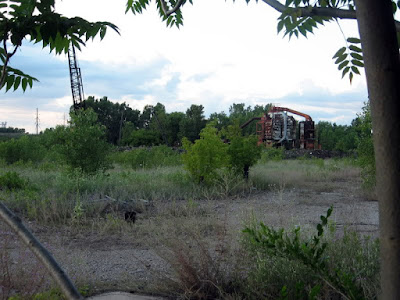 According to Businessweek, the Saginaw Rock Products Co. manufactures ready mix concrete and cement, and was incorporated in 1946. 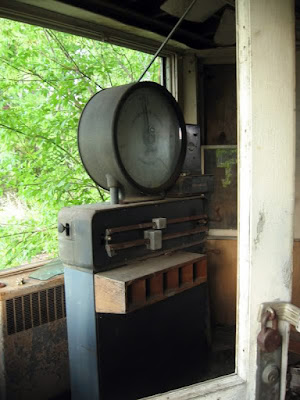 Though this front parcel was in a ruinous state, they were still operating at a back parcel that sat between the Saginaw River and 1st Street. 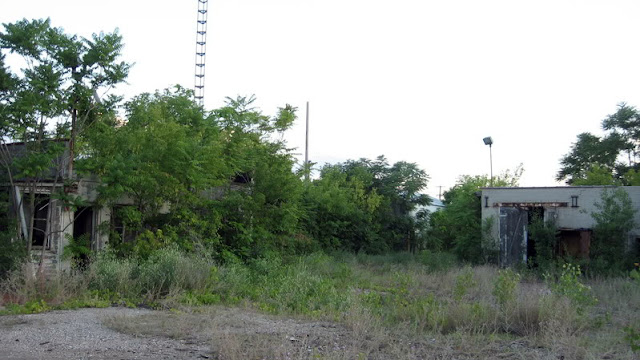 Today, this site has been cleaned up quite a bit. 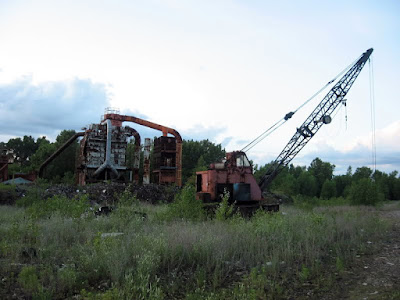 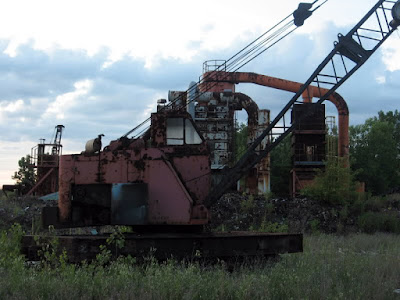