Kalamazoo may have been known across the world as the "Paper City," but according to a book by Dard Hunter, Michigan's paper industry actually began in Monroe County when its first paper mill was erected at Raisinville in 1834, under the name River Raisin Paper Co.

According to the city of Monroe's website the paper industry flourished rather well in the area for a long time, making such products as cardboard boxes, newsprint, wrapping paper, binder cardboard, liner board, fiber board, cereal cartons, recycled fiber; and (most recently) roofing shingles.

We had known about this abandoned paper mill down in Monroe for several years, but a disastrous fire in 2004 led me to assume that there was nothing left to drive all the way down there to see, so I never bothered until 2006 when I learned that the huge powerhouse and a couple other small structures were still standing. My partner had been there before the fire and reported that the mill was really something to behold before it was mostly torn down.

Like that first paper mill built in 1834, this abandoned plant was also once home to the River Raisin Paper Co., starting in 1910, but the site that it sits upon has a much deeper history, going back to an infamous battle during the darkest days of the War of 1812, known as the River Raisin Massacre.

Some British troops were occupying the village of Frenchtown at the time, which was an old farming settlement dating back to the French colonial days in the 1700s. While American troops under General James Winchester were marching into the area as part of a campaign to retake the recently captured Fort Detroit, the villagers of Frenchtown sent a letter to him begging to dislodge the British occupation from their town.

Against orders, Gen. Winchester decided to oblige. His attack struck swift and hard, and drove the British out into the woods as far as Brownstown. This was known as the Battle of Frenchtown.

The American troops then set up camp within the newly freed village, but the British struck back a couple days later with a stronger force in a surprise attack. The American forces only totaled 934 regulars and militiamen mostly called up from Kentucky and Ohio. They faced 597 British and 800 Potawatomi or Wyandot Indians, as well as six cannon. The Americans were caught off-guard, and quickly surrounded.

Despite having no artillery they repelled several charges from the British lines, but were eventually driven back to the river. In the retreat, the American troops were almost wiped out, and those who laid down their arms in formal surrender were betrayed; first they were robbed and then the Indians and British began slaughtering them rather than take them captive.

Only 33 American soldiers escaped the massacre, by removing their shoes as they ran through the woods, so as to leave bare-footed tracks in the snow that looked more like those of Indians in order to throw their pursuers off their trail. The village of Frenchtown was sacked and burned, and the settlers were driven to either Detroit or Ohio.

According to the website of Monroe County, Frenchtown was a "desolate, nearly abandoned" settlement for eight months following the massacre, with American dead laying about, unburied. Even after the conclusion of the war it was left in an "impoverished" state of destruction for five years thenceforward.

The River Raisin Massacre was among the bloodiest engagements of the entire War of 1812, and inspired the battle cry "Remember the Raisin," which was used for the rest of the war.

According to the Michigan Department of Labor's report for 1914, there were 106 employees of the River Raisin Paper Co., and seven work-related injuries reported that year. For 1917 they showed there to be just under 500 employees, and by the time 1920 rolled around there were 957 employees, 96 of whom were women.

This firebox was a Detroit Stoker, a company whose own plant was actually located directly across the river from us, at 1510 E. First Street.

Whereas every single industry seems to have (or have had) at least one trade periodical of its own, an article in the paper industry journal Shears for 1922 mentioned that a "strawboard mill" was just completed which gave River Raisin Paper a daily output capacity of 500 to 600 tons, which required "a workforce of 1,450 men." Clearly this enterprise was expanding by leaps and bounds.

An article in the Monroe News in 2011 quoted an interview with a descendant of River Raisin Paper's founders. He explained that the company even patented a type of waterproof tube used to protect ammunition during the Vietnam War.

"It was treated waterproof paper that was wrapped around the shell," he said, I imagine the reason being that the climate in Vietnam was found to be wetter and more harmful to metallic ammunition than any other theater of war the U.S. Army had ever operated in. River Raisin Paper also received the Army-Navy "E" Award in 1945, according to the article.

Another article in the Monroe News provides a timeline of the mill's history, noting that in 1957 it was acquired by the Union Bag-Camp Corp., and in 1986 Jefferson Smurfit took over operations.

This boiler was built at the Erie City Iron Works:

I didn't hear exactly when this mill ceased operations, but I believe it was in the 1990s, as that was when the River Raisin Battlefield National Historic Site was starting to take shape, as well as land deals to acquire more parts of the former battlefield that were on the paper mill grounds.

Apparently the corrugator plant was on part of the c.1780s settlement of Frenchtown where the massacre occurred, and in 1995 title to that land was deeded over to the city of Monroe. 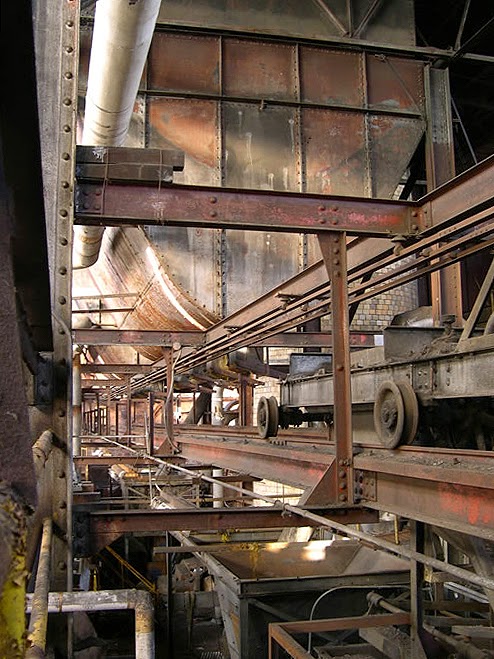 In 1997 developer Roger Homrich purchased the mill site from Jefferson Smurfit for $500,000, "much to the chagrin of city officials who were hoping the paper company would donate the land to the city," according to the Monroe News.

Later, two archaeological investigations found traces of the fenceline that American troops fired from behind during the 1813 Battle of Frenchtown. Grant-funded archaeological work continued into the 2000s.

In 2002 Clean Michigan Initiative funds were used to begin demolition on part of the mill and clean up contaminated soil. A year later state-owned land near Otter Creek was given to Mr. Homrich with the understanding that he would donate the mill property he held to the city, and demolish the dilapidated buildings.

In the distance, the cooling towers of the Fermi II nuclear power plant could be seen:

In 2004 the state announced they would spend $1 million in grants to demolish rest of the paperboard plant site. As you can see it was still standing in 2006, but that's because the demolition was carried out in multiple stages, and there were multiple parcels that needed to be cleared and transferred.

The other Monroe landmark chimneys:

At the end of 2005, Monroe officials announced an agreement with Mr. Homrich, in which much of the land would be donated for public use, and in the following spring Mr. Homrich signed the paper plant land over to the city. The historical society paid Homrich $325,000 for the mill's pumphouse and offices.

That was still not all however. In July of 2007, the Michigan Department of Environmental Quality approved another $1 million loan to complete demolition and site cleanup.

The skew arches over these old windows give a clue as to the true age of this particular building:

Down in the bowels of the plant, this was the base of the smokestack, with barely any light filtering down in:

Up in the clerestory (if I may call it that), was this coal conveyor that fed the boilers from above:

Out in the surrounding debris fields were still many remnants of the buildings that had lately been torn down.

This relic had clearly been sitting around for quite some time:

It began to get dark, and as we were about to start leaving we came across a large building foundation that we could actually walk into the basement of via a loading ramp. Inside there were still racks and racks of what were essentially giant rubber stamps used to print logos on paper products, such as beer crates. They were like big rubber mats with a reversed logo in the middle, which I presume was wrapped around some kind of roller that spun over the beer crates as they moved down the line.

I assumed it was beer crates that were being made, because most of the logo stamps were of beer brands. It was too dark to take photos by this time, but I did steal rescue one. I sorted through the whole rack to find a Stroh's stamp, but I never did. So I took a Pfeiffer Beer one instead, figuring that was even more obscure Detroit brew: 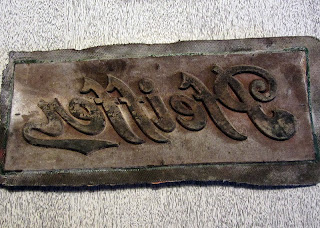 Since Pfeiffer's hasn't been sold since, uh, the 1970s, I can't imagine how they still had a Pfeiffer's stamp just sitting around, but there you have it.

If I recall correctly, these two massive pieces of equipment were inline 16-cylinder engines (and yes that's a person standing up there).