It was late when Navi and I arrived back home in Detroit from our week-long excursion to the Yoopee, but we decided that some beers and a rooftop might be a nice wrap-up to this highly successful mega-campaign of northern exploration. 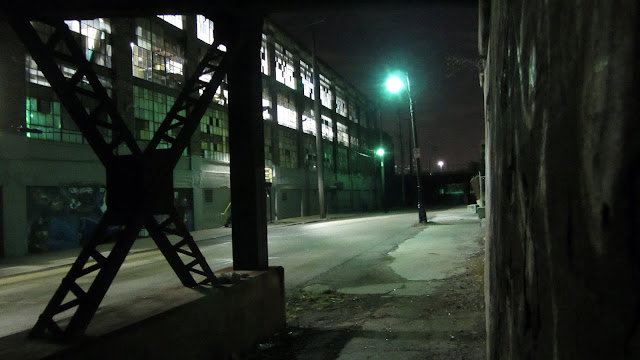 Colt 45s were acquired and we decided to sneak into another site that neither of us had done before; that thing across the street from Detroit Stamping (former Fisher Body 23). I never could figure out exactly what it was, but it looked like a concrete plant of some kind.

You may recognize this joint from the scene in the movie 8 Mile where Eminem is battle rapping with his coworkers outside by the lunch cart. 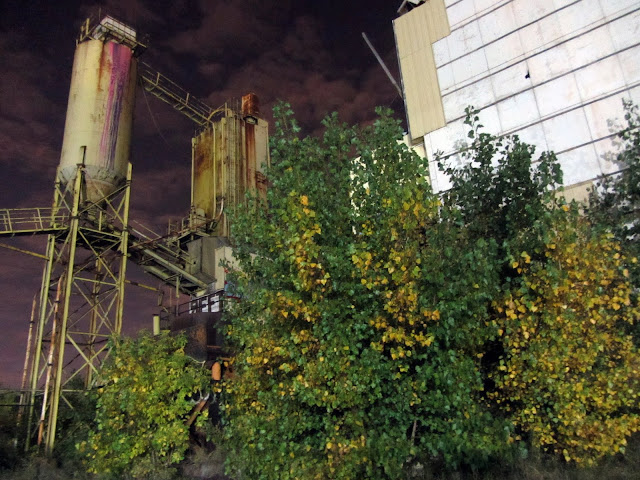 More recently, it seems to have served as a venue for underground dog fighting, or at least as the place where fighting dogs were kept. I think I vaguely remember hearing of a dogfighting ring within the neighboring stamping plant employees that was broken up in years past.

At any rate we definitely found evidence of dogs being kept here, and we were definitely on our guard until we got up off the ground. Thankfully dogs don't climb ladders too well, or I might have been killed long ago. 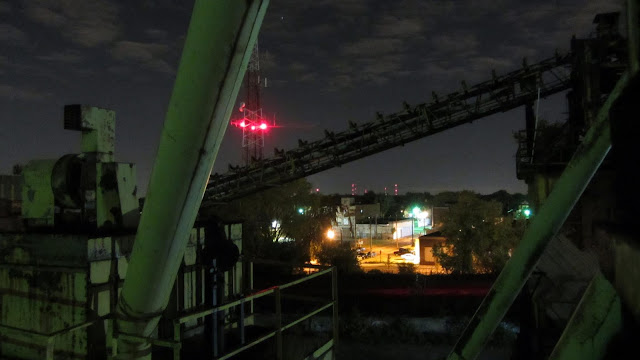 It was not easy for me to figure out what this place officially used to be, or what company owned it. It looked like a cement plant but I wasn't sure, and I didn't see any signs anywhere on site that named it or even gave an address, and I knew that it was too modern to appear on Sanborn maps. So I essentially typed potential Hastings Street addresses (odd numbers, for the west side of the street) into a web search until I found one that pulled up any hit resembling a former business or superfund site. When I got to 6441 Hastings, I nailed it.

The info came up via the MDEQ's storage tank database and indicated that this was Clawson Concrete Plant #8, and that the underground tank in question had been removed. It was installed in April of 1966, a date that seemed plausible. Since this tiny sliver of a site had obviously previously been the center of a very busy railyard that has since decommissioned and removed many of its former tracks, any plant that was ever put here must by necessity be quite small, though there were structures present here much earlier than I surmised. 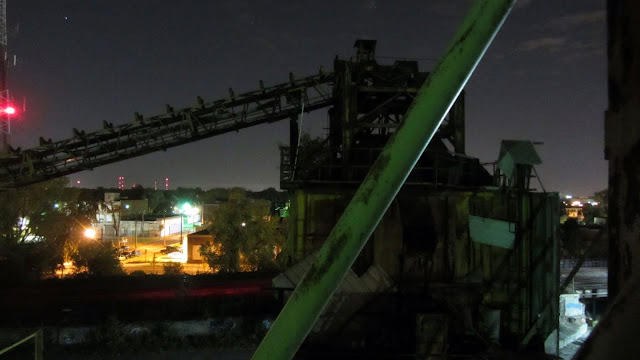 For instance, the 6441 address also brings up a much older hit via Google Books however, from a c.1921 issue of The Automobile Trade Directory, which indicates that Jenks & Muir Mfg. Co. held the address at that time. Clarence M. Burton writes of the Jenks & Muir firm around the exact same time, saying that they were founded in 1894 and employed up to 400 men, a number which does seem to indicate a small factory. An issue of the Detroit Engineer from 1951 shows the address held by the Hyde Spring & Wire Co. What these older plants looked like, I had no idea.

Here is Detroit Stamping, all lit up but hardly anyone in there: 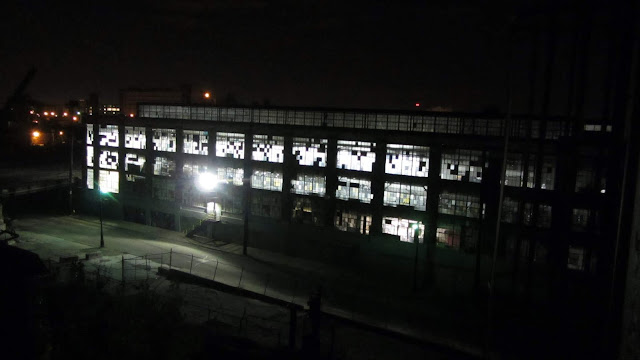 According to The Concrete Producer trade publication, as of 2001 Clawson Concrete's #9 plant was in Novi, and their #16 plant was in Sterling Heights. A circa-2010 document from MDOT shows that several more Clawson sites exist all over the metro area. 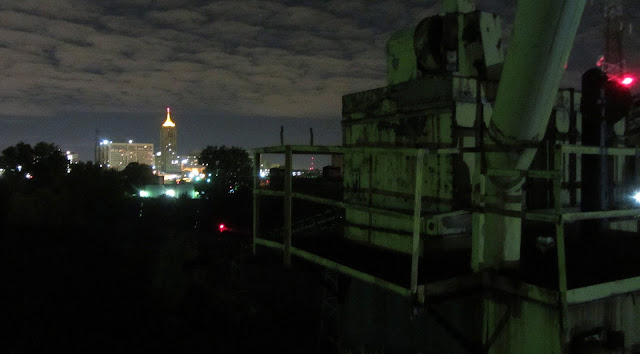 In the 1960s, three of Clawson's Metro Detroit plants were acquired by Edward C. Levy Co., a company that got its start 100 years ago hauling slag from the Ford Rouge Plant in Dearborn. It sounds like Levy still owns this property. In the 1970s, the Edward C. Levy Co. also acquired the Peerless Cement Plant, which I explored in an older post. 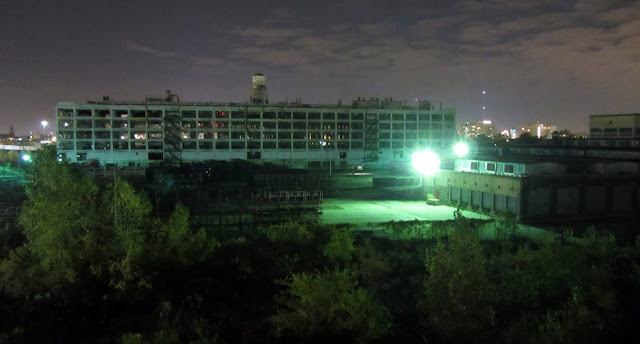 Our location put us smack in the middle of the Fisher Brothers' former empire, with a good view of Fisher Body Plant #21 (above), and #22 (below): 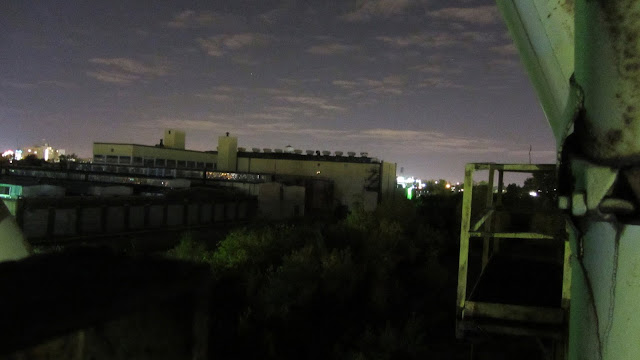 We sat up late and listened to the sound of trains grinding the rails around us and slamming into each other to hook-up, while sipping beers looking out over the city from this new and unique perch on a frosty October's night. 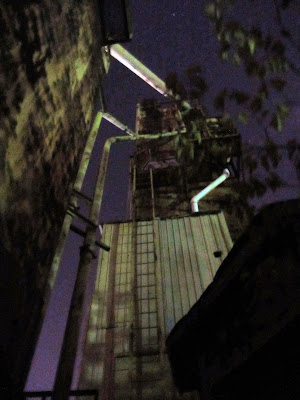 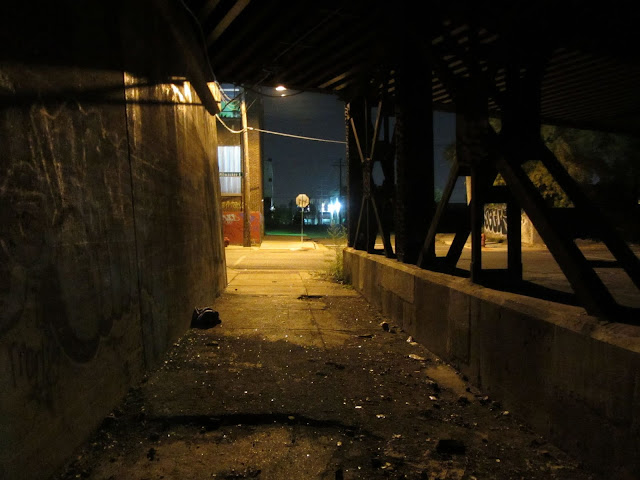