Day 6.
We woke up in our Ontonagon motel room very refreshed from not having slept shoulder to shoulder in the bed of a pickup truck out in the cold for once. We packed quickly and hit the road for the Keweenaw. I had my sights locked in on breakfast at the Suomi Bakery in Houghton. Navi said he had been to Houghton once in 2007, but never crossed the Lift Bridge.

After breakfast I decided it was time to move on to something new for both of us; the Mesnard Mine: 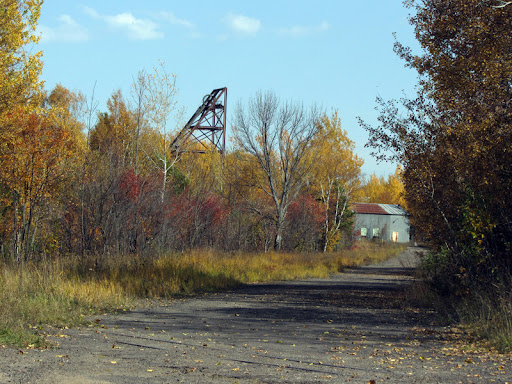 Just up the road lay a small headframe that I had always eyed from my car and never quite had the reflexes to turn off the road in time to see. Today however would be different. 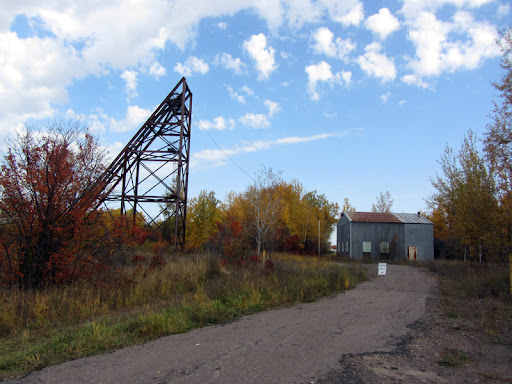 We parked at the end of what had undoubtedly once been a rail line and I made a beeline for the headframe, fully intending to climb it. Before I could start however, I noticed that there was a nice little skip car sitting at the bottom, still waiting to return to the depths for another load, at the edge of the now covered up shaft. 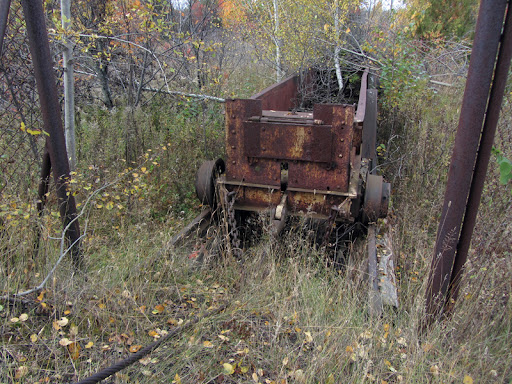 The Mesnard Mine, which started in 1859 according to Mindat, was acquired by the Pewabic Mining Co. in 1876, and then the Quincy Mining Co. in 1897, who turned it into their #8 shaft. Quincy operated it until 1931, and then only sporadically until 1945.

The Mindat entry says Quincy allegedly dug this inclined shaft to 86 levels, but judging by the diminutive size of this headframe and hoist, I find that info to be questionable. Lawrence Molloy says that the Mesnard Shaft was only cleared to the 20th level, or about 2,000 feet, which sounds more likely. 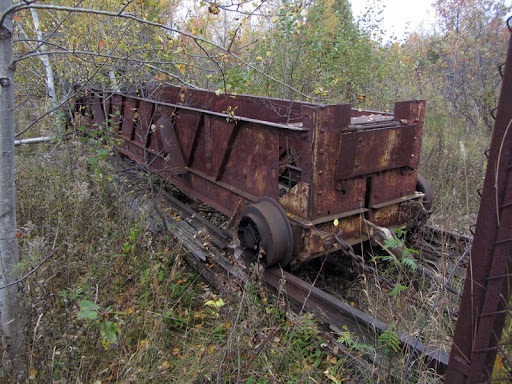 Quincy again explored the Mesnard by diamond drilling in 1976 as part of their "Homestake Project," which I assume by the schmaltzy name and lateness of the era means that it was one last desperate attempt to revive the dying Keweenaw mining economy, but it never again produced copper. Quincy declared it tapped out in 1977.

Hey, why not climb this here ladder? 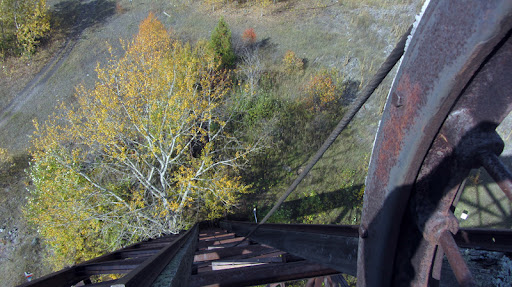 Mike Forgrave of CopperCountryExplorer says that these more modern, temporary-looking structures are here because when Quincy bought the property they demolished all the old Mesnard Mining Co. structures and built new ones. 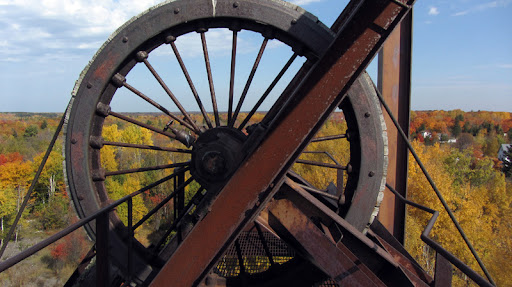 I felt very exposed up here, so I limited my dick-around time to a minimum. The view was sweet though. South to Houghton-Hancock, and the headframe of the Quincy Mine #2: 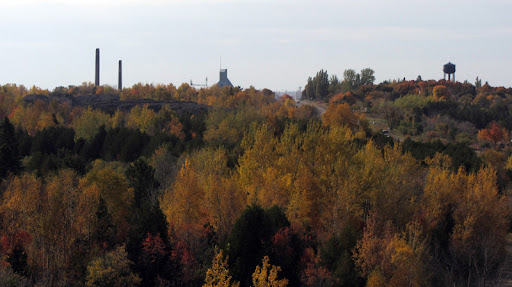 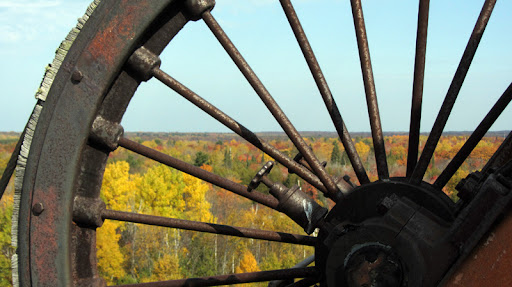 Back on terra-firma, where the somewhat entertained Navi had patiently been waiting for me to get the climbing out of my system, we moved on to check out a small shed-type building nearby that probably used to be a dry house or something. 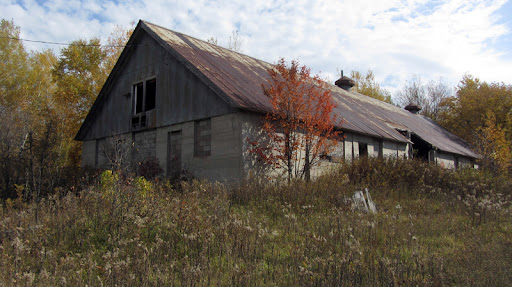 This property is currently owned I believe by the same people who run the Quincy Mine tours. 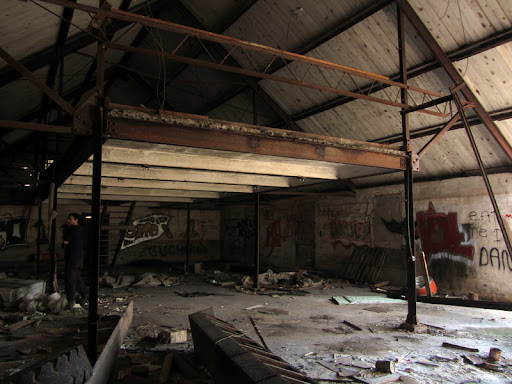 Mike Forgrave notes that the Sanborn maps showed this to indeed be the old dry house, with the mine captain's office once housed inside as well, but it seems to have been converted to other uses in the meantime. 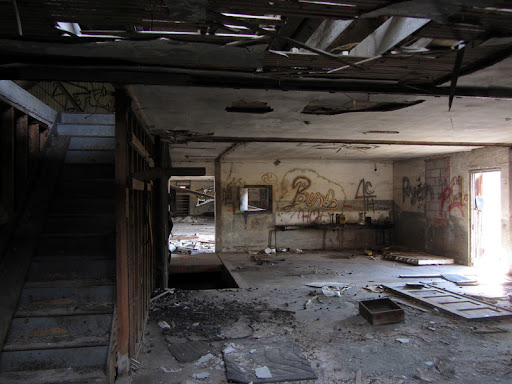 Little did we know, there was also another ruined concrete structure that we missed, just back in the woods about 80 yards away that looks like a hoist and engine house from above and which Mike confirmed. Oh well, something for another time I guess. 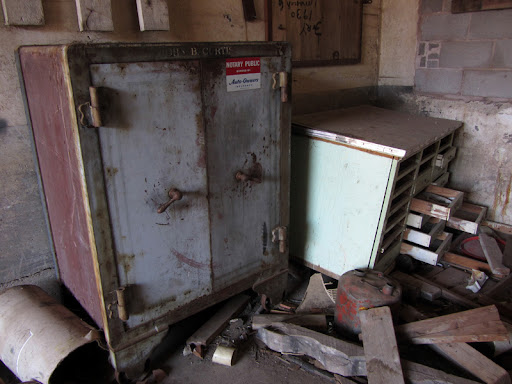 Feeling frisky, we decided to head clear up to the Calumet Brewery’s ruins, past Calumet. My feeling was that dinner and beers in Calumet was the way to go, so in the meantime we should keep forging northward up the peninsula and explore stuff up there before heading back by the end of the day. I had always wanted to check out the Delaware Mine, which is a privately operated historic site, so I figured why not today?

Email ThisBlogThis!Share to TwitterShare to FacebookShare to Pinterest
Labels: Houghton County, Mesnard Mine