Day 4, continued.
It had by now turned from a glorious morning into an even gloriouser afternoon here on top of Mt. Arvon, Michigan’s highest point. The blaze of fluttering gold and orange set against the sapphire skies was incredible. 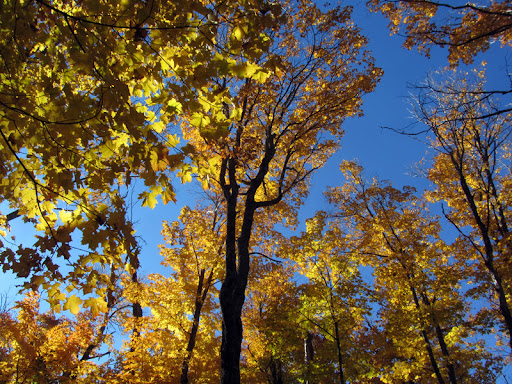 For what it’s worth, Michigan has the tallest high point out of all the Great Lakes states, except for Minnesota. We were now almost a full 700 feet higher than we were this morning on top of Bald Mountain. Hard to believe, in a way.

For proof, I now went in search of the supposed viewing point that had been chopped out of the forest for the benefit of those who may have spun a bearing or gouged a hole in the oil pan of their POS car on the unexpectedly difficult climb, only to find there is no view from the top. 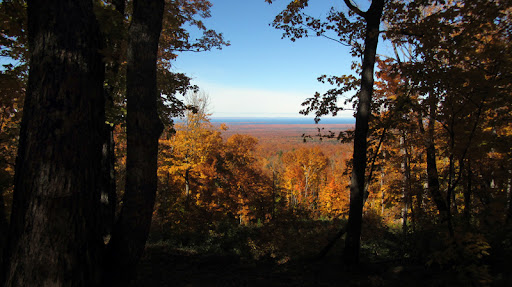 Once again, the hills on the horizon are those of the Keweenaw Ridgeline, and the smaller peninsula in the foreground is the Abbaye Peninsula, where we would be heading next. 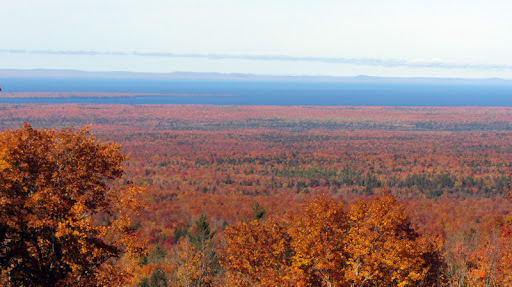 Zoom zoom zooooom! This is the maximum my camera will reach: If it weren’t for that bush in the frame, you might claim I had taken the shot from a plane. That’s Finlander Bay, at Point Abbaye, by the way. In my opinion one of the remoter places in Michigan. I just remember looking at the area on a map when I was young and just thinking that, wow, there were just so many extraneous nooks and crannies to this state, and wondering if it could ever all be explored. As a kid I could see that there was a tiny faint nameless road leading out there, and wondered, why? Who would need to go out there? Did someone actually live there? Who, and why? There was no town marked, just vacant green space. Of course I now know that retirees and rich cottagers would live there most likely, but I guess it's still possible that a few reclusive supervillains might also have selected that jagged, lonely finger of land as their abode.

Concerned that we might not make it to the Abbaye Peninsula with daylight to spare, we got back in the truck and began the long descent of Mt. Arvon. It was more blind navigation for a couple hours in order to make our way over to round the fjord-like Huron Bay and enter that mysterious peninsula. Somewhere near there were the ruins of a large industrial dock that once would have been the shipping point for the Huron Bay Quarry Co., who operated the Arvon Slate Quarry. I had decided however that they were not picturesque enough to merit a side-trip.

Now, you wouldn’t think that this bumpy spot before the creek would be that bad: 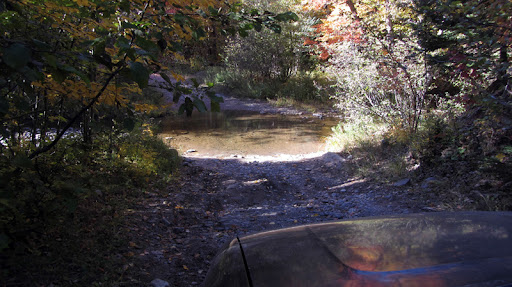 I eased the Rusty Camel down the steep grade toward the water’s edge, and suddenly we lurched to a stop. I had gotten hung up on something. No matter, I’ll just rock us free...
Okay…
“Navi—get out and push.”
F#$%.

This is not good. We were in the middle of nowhere.

What happened was, a large protruding rock managed to snag the undercarriage-mounted spare tire when the truck dipped into the rut, and it managed to pull the tire down from its mount, and wedge one side up onto the rear differential, while the other half made contact with the ground. I tried pulling the tire free, kicking it as hard as I could, having Navi bounce the vehicle while I tried to drive it out; nothing worked.

Finally, I got the jack out from under the hood (which involved standing in the creek), and used it to raise the rear of the truck up. This worked like a charm. The tire suddenly popped free from the rock, and I was able to beat it back into its proper position, and try to secure it better. I was worried there for a minute, but we could now continue, happily.

About an hour later, civilization?! 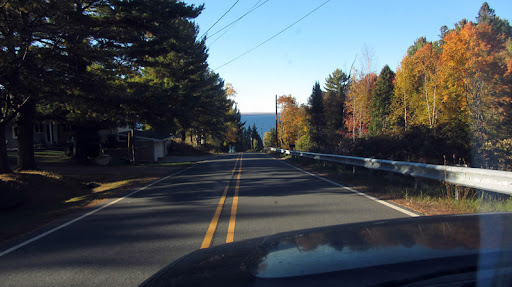 It would seem so. Truly, we had accomplished the goal of driving from one end of the Hurons wilderness to the other, and much more easily than I predicted. PHEW. It was all downhill from here.

Speaking of steep hills, on our approach to the road that wrapped around the bay and up into the Abbaye, I spotted this apparently abandoned church: 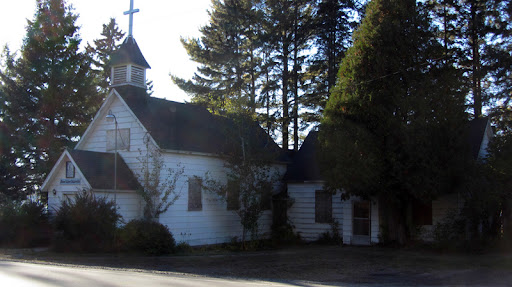 The Abbaye Peninsula remained one of the last unviolated sanctums of the Anishinaabe people until 1877 when the Hebard Lumber Co. began to make inroads. (This is also where Father Baraga arrived in 1831, at Zeba, to found the region’s first mission and convert the natives. So Catholicism goes back a long way with the Ojibwe here). There was a sawmill at Pequaming, on the backside of the peninsula (MAP). The words over the church entrance read, “Blessed Kateri Tekakwitha,” and the painting is not of the Virgin Mary, it is of an Indian woman who happens to have been sainted.

“Pequaming” meant basically the same thing as “presque isle,” in other words, “almost an island.” In fact in ancient times I’m sure it was one. The beach there is called “Second Sand Beach,” which in my mind implies a slow joining of island to mainland. At any rate, this was where Henry Ford decided to set up another lumber mill for supplying Ford Motors. He even had a summer home here (Henry had at least three summer homes, by the way), which is now a B&B. 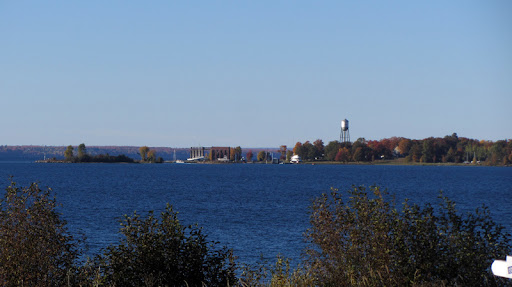 Like Father Baraga, Ford came here looking to spread his way of life. He first approached the Hebards in 1923, interested in the forestland. Ford ended up buying the entire town and all its mills too, because he liked the idea of firmly owning every single link in his supply chains, in order to prevent assembly line stoppages in Dearborn due to unreliable supply lines.

This is why Ford also owned his own fleet of cargo ships. He also offered his $5/day wage to the workers—that was not a Highland Park-only deal—which in some cases equated to almost a 50% pay raise. 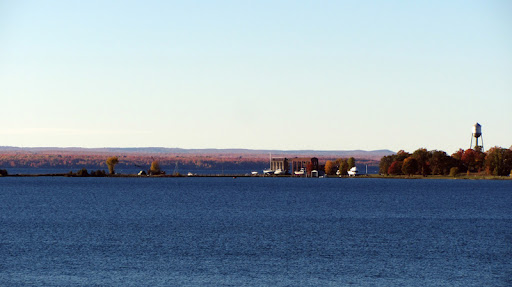 The operation employed 200 in the mill and 300 in the woods. The only thing left today is the powerplant, and the old watertower that still bears the old “FORD” script painted on it. The town of Pequaming was one of Michigan’s most infamous ghost towns for a long time, as it sat abandoned from WWII until recent years, when the mill was mostly torn down and the area redeveloped for a few homes.

Unfortunately the promise of a gaping abandoned mill with towering smokestacks and the spooky personal residence of Henry Ford as described in Roy L. Dodge's classic old Michigan Ghost Towns book was no longer a valid offer. 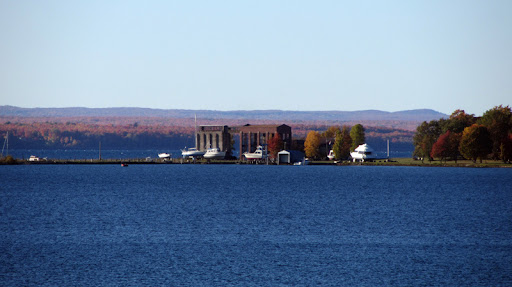 We did get up close to the mill, but it is private now and I couldn’t get a good shot, so I'll post Navi's instead:
Here is an old hall in the fading village of Aura, the last real community one passes before entering the outer fringes of the peninsula: 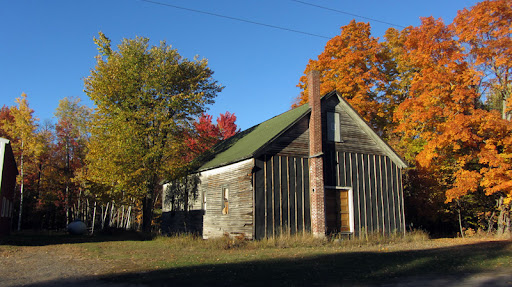 There are very few roads in the Abbaye Peninsula, and none of them are paved (MAP).

The forest is dark and tangled, and the narrow path through it is much like a winding tunnel. When we came to the end, we were suddenly treated to a magnificent view of Superior, and the Huron Islands in the distance: 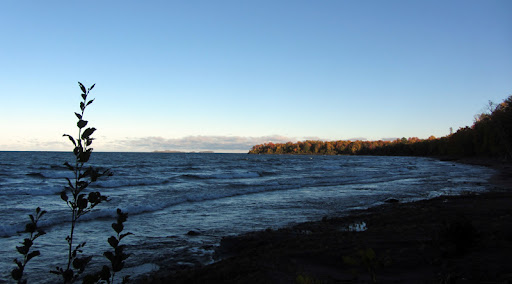 The setting sun made for a gorgeous contrast, and we moved quickly to get out there for more pics. The autumn winds blowing in were pretty stout, the kind that chill you to the bone even in decent seasons, so we bundled up extra warm for the hike. One of the first things we saw was a bald eagle high in a pine tree. 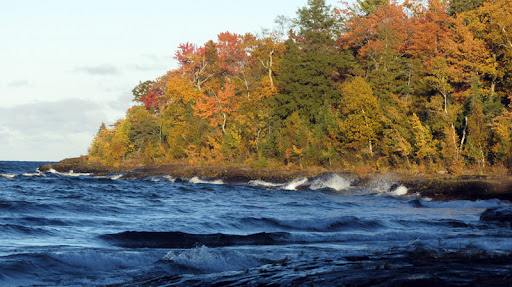 To the right here, was a fascinating little sea cave underneath the actual trail we were hiking on: 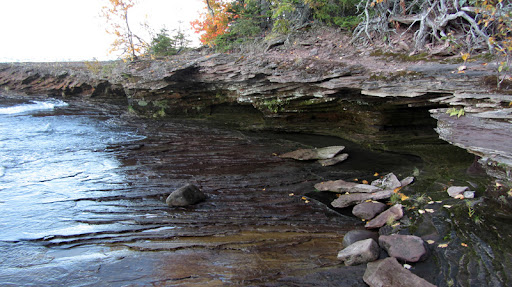 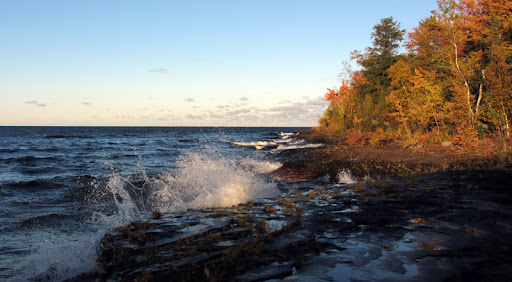 The lonesome explorer on the shore: 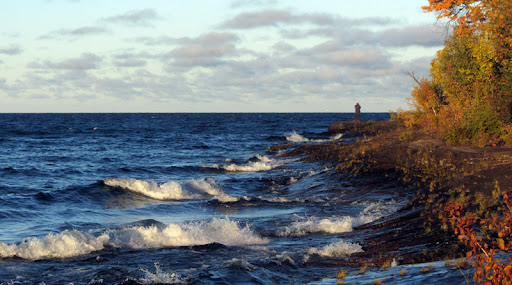 Despite being 99.9% cloaked under an impenetrable veil of trees, I was already very glad I had bothered to explore this peninsula. Very pretty. 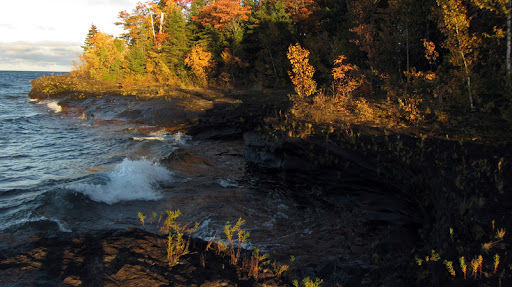 Silver spray caught in the last rays of the setting sun: 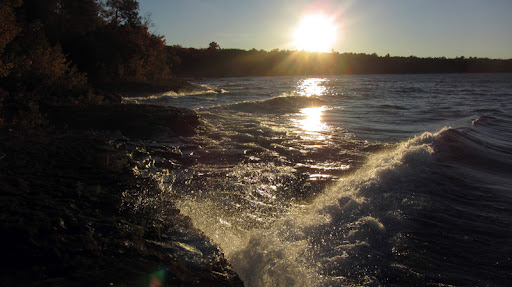 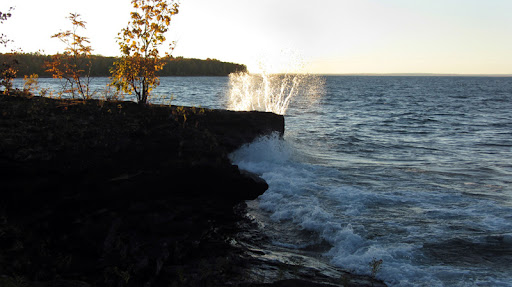 Here we were, at the cracked fingernail of the peninsula. To the left, the forbidding, mysterious Huron Islands lay out to sea, well beyond our reach. To the right stood the bulky forms of the Huron Mountains. 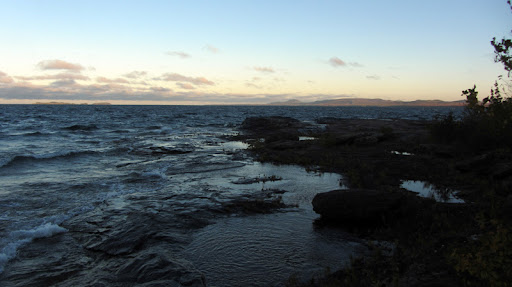 The lonesome one closest to shore is Huron Mountain itself: 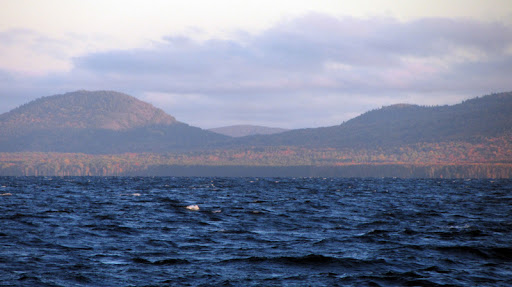 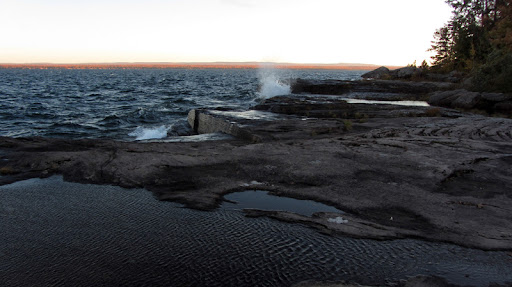 The Huron Islands are an uninhabited wildlife refuge, essentially just hunks of cold granite that stick above the waves, with a few trees on their backs: 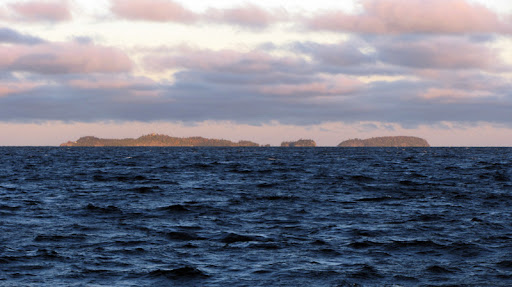 Not too many people get out there…there’s no ferry service, and nothing there but a lighthouse (MAP). 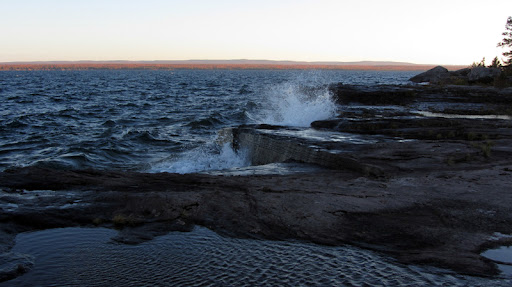 We were freezing our ballskis off standing here, and I was hit with a couple gusts of wind that nearly took me off my feet. 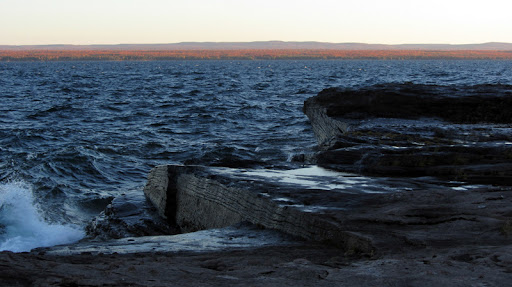 We soon decided it was definitely time to start back in search of a hearty meal and lodgings. Navi was looking forward to a motel in L’Anse tonight, and I was down. What happened however was quite the opposite. We ended up getting there late, only to find out some convention was in town, and no rooms were available.

Also, the only restaurant still open was Burger King. Even the f#$%ing “Night Owl Restaurant” had closed for the night. We both gritted our teeth and traded glances through slitted eyes before deciding to just keep driving west to our destination for the night. 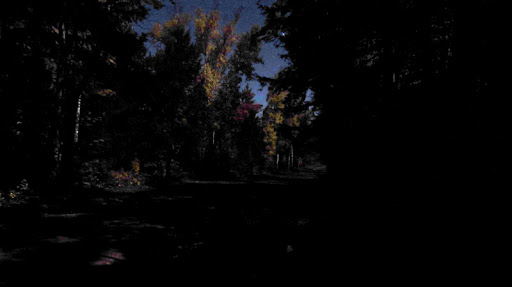 One of my other secondary objectives for this grand trip besides the Hurons was to do a more thorough follow-up exploration of the legend-haunted Silver Mountain (MAP).

We poured on the speed westward along M-38 and then veered off deep into the forest on USFS trails. We parked at the North Country Trail crossing, not far from Silver Mountain, and rolled out our sleeping bags in the bed of the truck. It was very chill that night, and I lit a candle for added heat as we sat up bullshitting for a bit, cracking beers and comparing how many lighthouses we had been to like some sort of uber-nerdy dick measuring contest. The forest was deathly silent, and the feeble cold light of a silver moon was the only illumination. I was extremely glad to be able to say at this point that we had accomplished the Hurons successfully, and we toasted this victory. I was sure however that this was only the beginning, now that I knew just how thinly I had scratched their surface.