The Grand Trunk Warehouse & Cold Storage at 1950 E. Ferry Street has always been sort of cast aside by the explorers of Detroit's abandoned structures, despite having a very nice view from the roof. I calculate that this is due mainly to the fact that the basement contained a shipment of rotting meat that never left, and stunk like hell.

Better yet, the city trash incinerator is immediately next-door and the stench from that joint is even more powerful on certain days. Not to mention there was almost nothing of interest to be found within this warehouse, and the upper floors have no windows, making them pitch black and hard to navigate. Come to think of it I'm not sure why any sane person would ever want to go there.

With so many better places to check out nearby, this place has ended up being left alone by everyone except the scrappers--even the graffiti kids have barely touched it until recently, which really says something. Just being in the joint is a sort of test of one's fortitude. Most people who do go here usually go just once, and vow never to come back again.

The columns on the first floor even appear to ooze with an unspeakable black filth, no doubt bled from the soot of some recent fire, giving the place an even grimier appearance:

But I predict that with the loss (and coming loss) of so many favorite abandoned hangouts in the city recently, people will begin to come here more frequently even despite the horrid reek.

The fact that the words GRAND TRUNK WAREHOUSE are painted in giant letters across the top is probably the only reason anyone knows what to call it, myself included. It was clearly a cold storage warehouse, and as far as I can tell never served any other purpose. My guess is that it was built in the mid-1920s.

So what is the "Grand Trunk?" Anyone who grew up in Michigan has probably heard the name or saw a sign on a viaduct that said it, or perhaps saw it written on a map.

The Grand Trunk Western Railroad began in the mid-1800s, and had branches all over southeastern Michigan. In 1859, a 12-year-old Thomas Edison got his first job working as a newspaper boy on the Detroit to Port Huron line, where he was exposed to the use of the telegraph. Edison grew fascinated by the technology and decided to become an inventor himself.

This cold storage warehouse happens to sit right along the Detroit to Pontiac line, which is where it drew both its name, and its freight service from. The Grand Trunk was one of the last railroads in North America to use steam locomotives, according to a railroading website.

Beatrice Foods (the other company name painted on the wall) still exists, and according to their company website they were founded in 1894 as Haskell and Bosworth, in Beatrice, Nebraska.

They changed their name to Beatrice Creamery Co. in 1898, and by 1946 changed it again to Beatrice Foods Co. since they were no longer only in the dairy products business, and had branched into grocery. The company was divested in 1986, and reorganized under Hoopes Enterprises, Inc. in 1991. 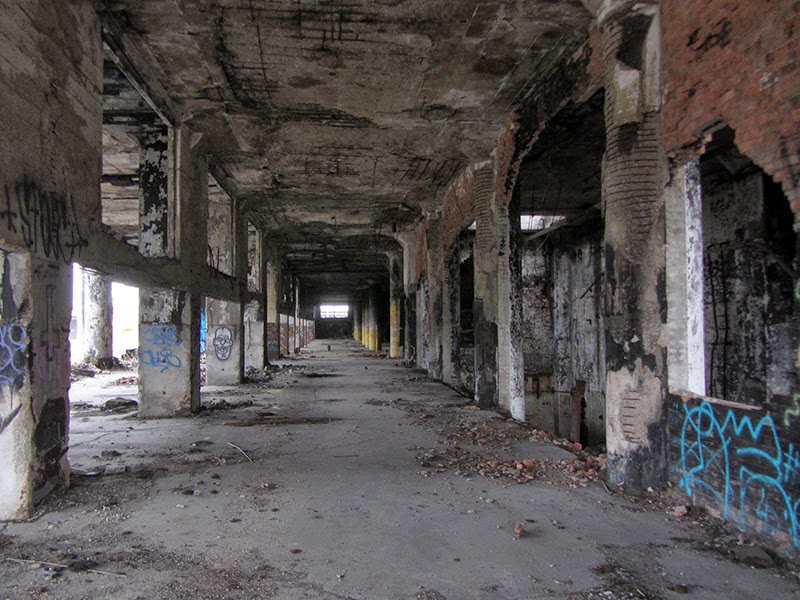 Though I haven't personally encountered any, I have been told that the basement of this place where the old rotting meat was at contains a colony of gigantic rats that looked to be about the size of well-fed raccoons. That doesn't sound like the kind of thing I'd like to venture into without a suit of armor from the DIA and a squad level machine-gun. 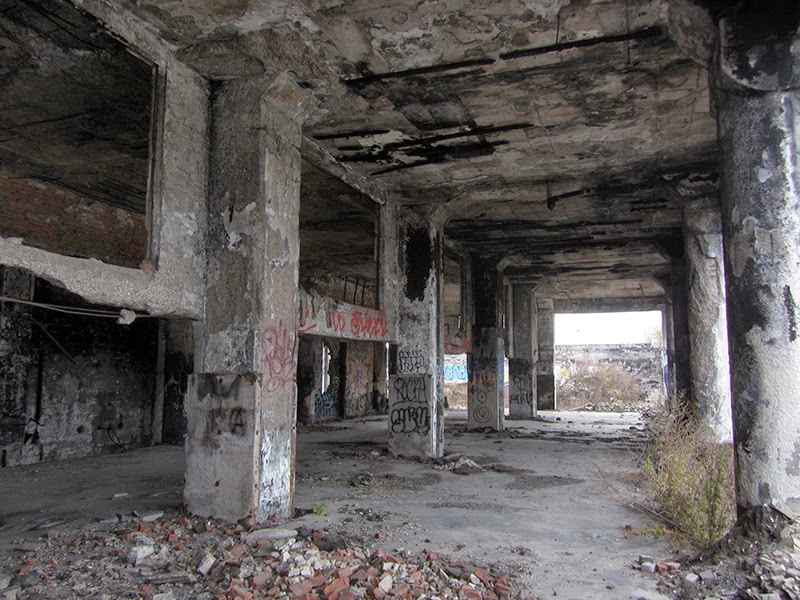 It is likely that rats are in this area in great numbers, again thanks to the proximity of giant mounds of raw garbage constantly being brought to the incinerator next-door.

Just think...some of that putrid reek you breathe into your lungs probably contains incinerated rat. 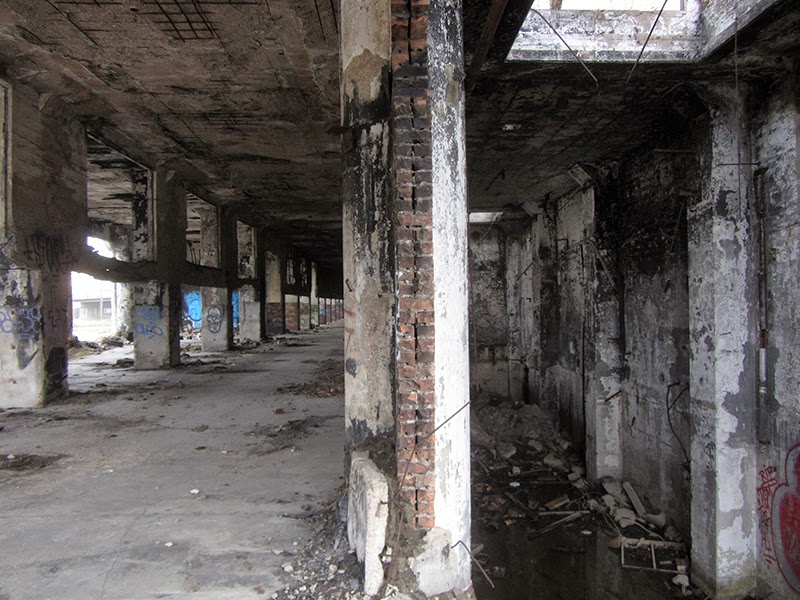 I believe this portion of the building has been torn down:

Okay, fast-forward to the roof...

Looking toward the Russell Industrial Complex:

The Packard Plant in the distance:

This is the scrapyard you can see from I-94:

The big blue-painted American Axle Plant is seen in the distance:

The plant stretching across the foreground here is the former Fisher Body Plant #10:

During the "Polar Vortex" of 2013-2014 I decided that it would be a good idea to go check out the Grand Trunk Warehouse again, since the stench would be mostly kept at bay by the cold. 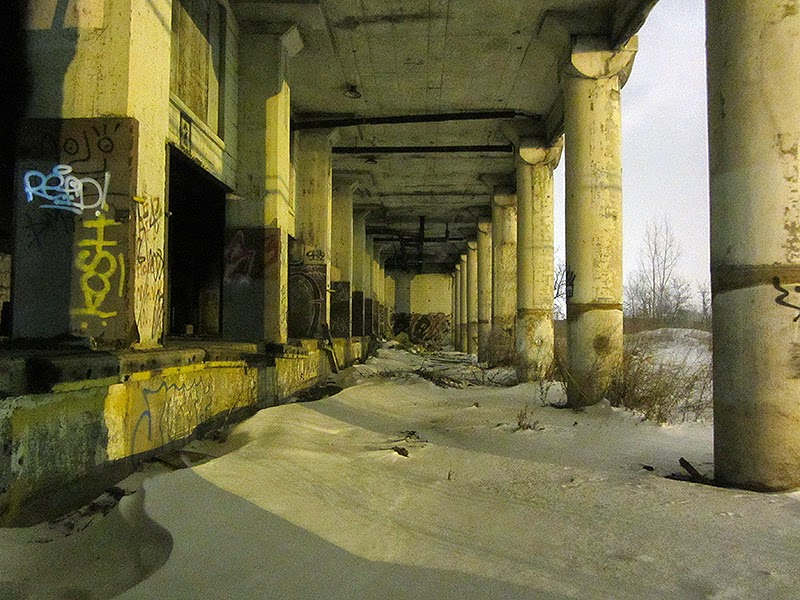 This truck loading dock is almost identical to the one at the old Port of Detroit ("Boblo Terminal") warehouse, which leads me to believe that this structure too was designed by Albert Kahn. Detroit architecture guru Benjamin Gravel informs me however that it was designed by the firm of Moores & Dunford. 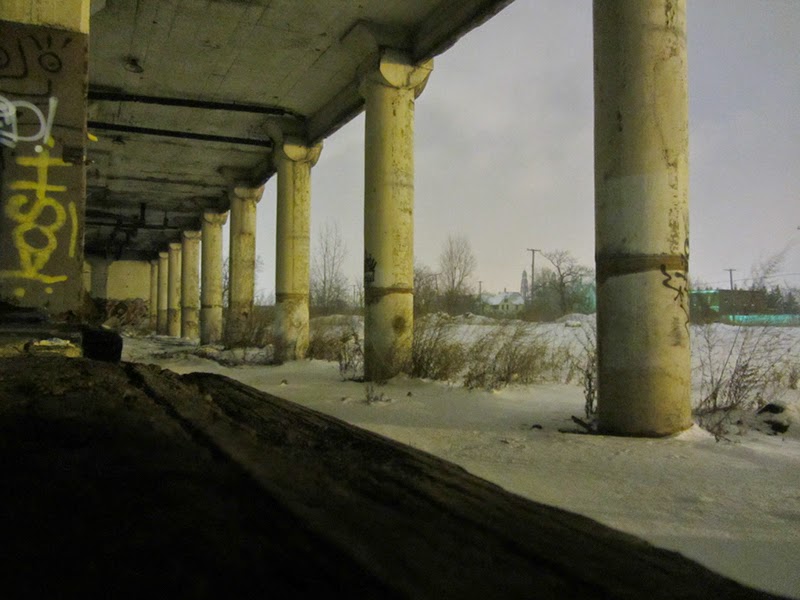 The area is lit only by the ghostly sodium arc light of the few nearby streetlights, which spills into the building in sparing, eerie rays. 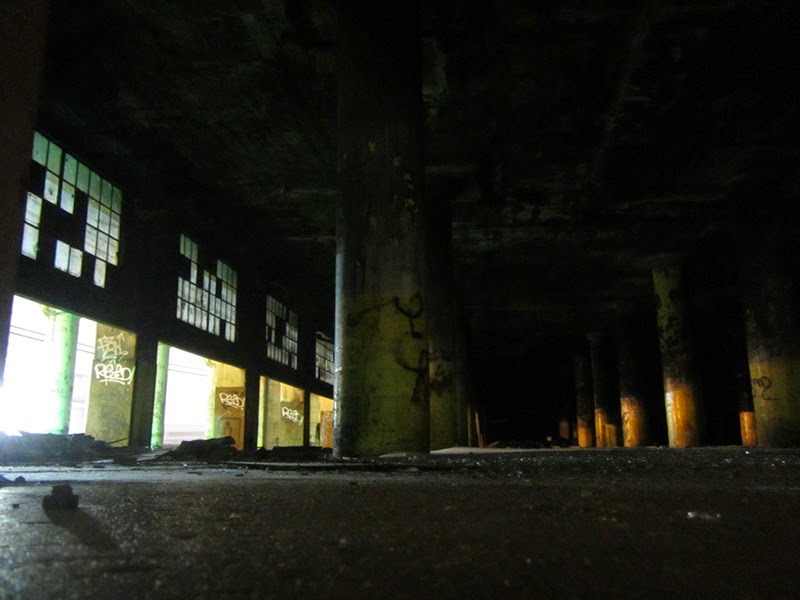 So anyway, I got curious and looked up the Sanborn maps. They showed this parcel to be occupied by the Lewis-Hall Iron Works in 1921, and that the current building, the Grand Trunk Warehouse & Cold Storage Co. Inc., was built in 1927. So I wasn't that far off. 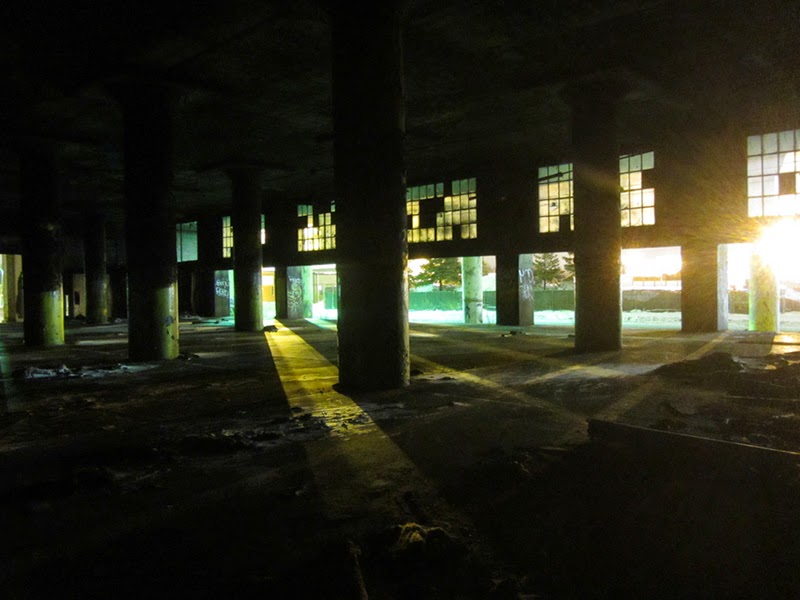 On the southern side of the building the second, third, and fourth floors actually had windows, because there were offices there at one time. Other than the loading docks this is the only part of the building where natural light spills in: 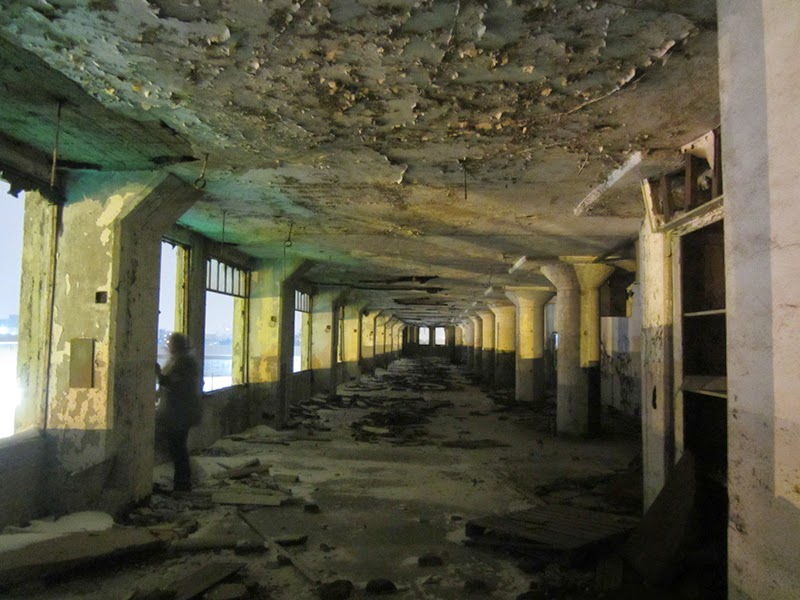 Once again, the dimensions of the spaces are almost identical to the office areas in the Port of Detroit (Boblo Terminal) building, and I am led to believe they share an architect and were built around the same time.

We continued up into the darker, maze-like upper floors in search of the roof access. Even though I have been here multiple times before, I have trouble finding it every time. You know it's a real bitch when even the fire department has to write notes to themselves: 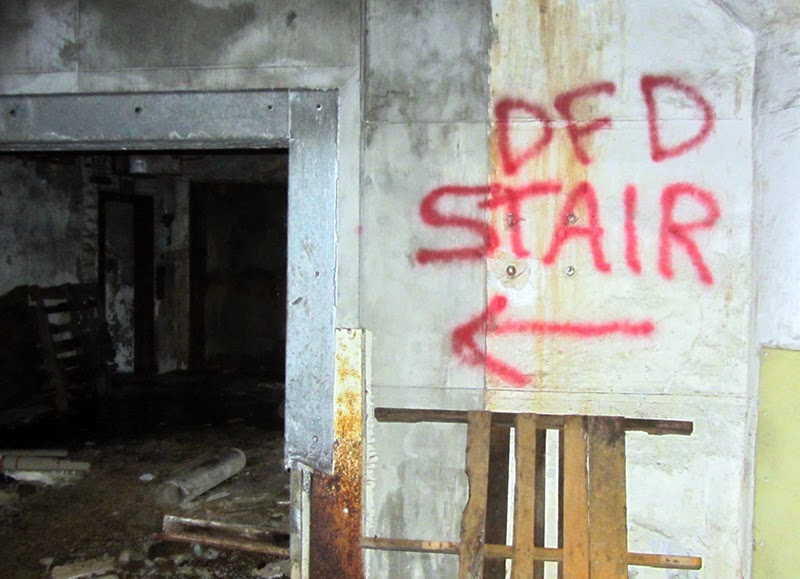 At least I didn't feel so bad anymore for losing the stairwell for half an hour... 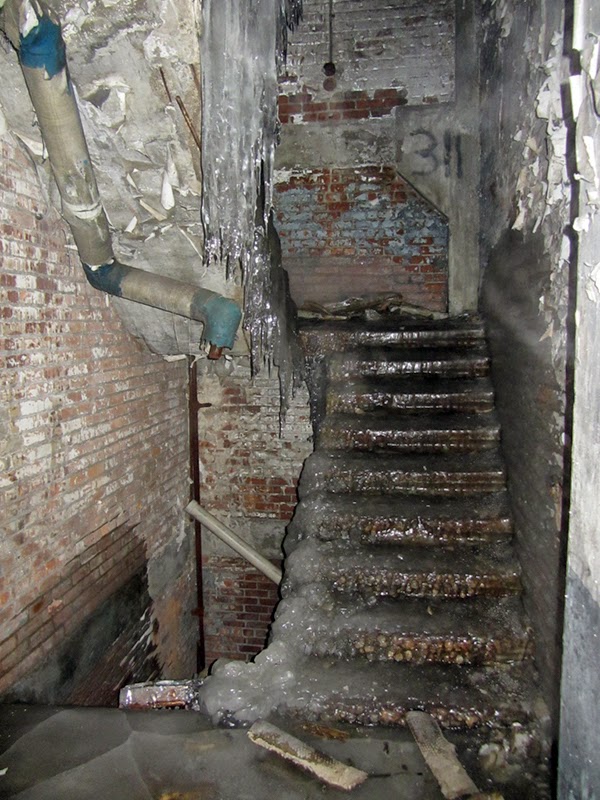 ...Which, by the way had lately become encased in several inches of ice, making walking on it a nearly suicidal proposition, considering the lack of handrails.

The other reason I climbed into this hellhole was to hopefully get a good glimpse of the Fisher Body Plant #10 fire from the watertower, which was still raging at the time: 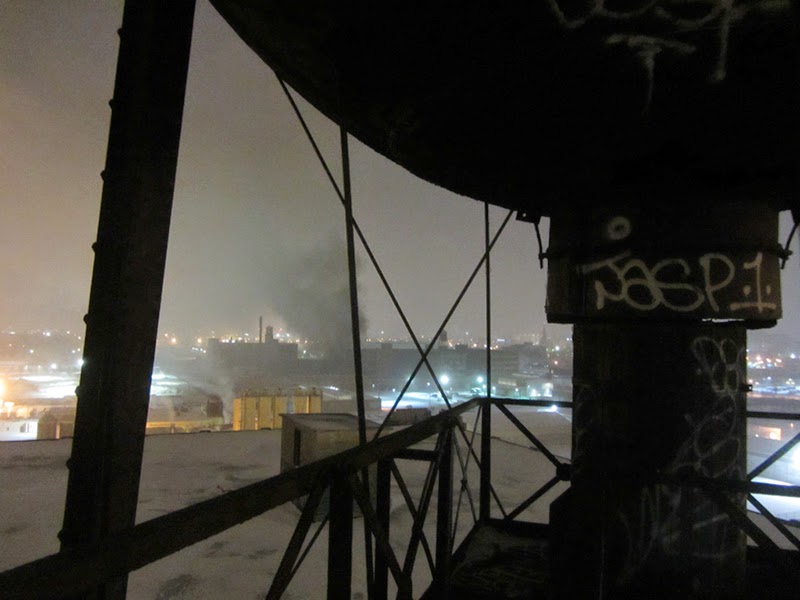 Unfortunately the view was blotted out by a Michigan-brand snow and rain mix. So it was back down into the depths of the icy labyrinth for me. 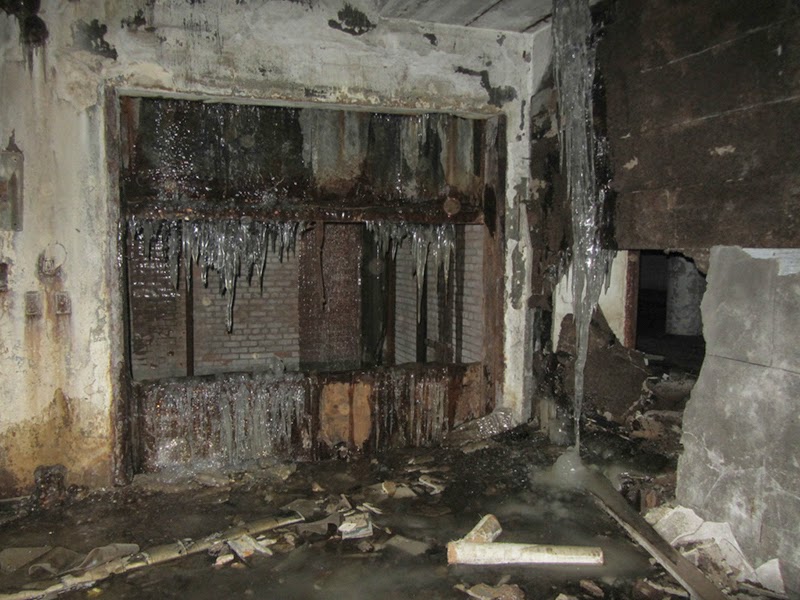 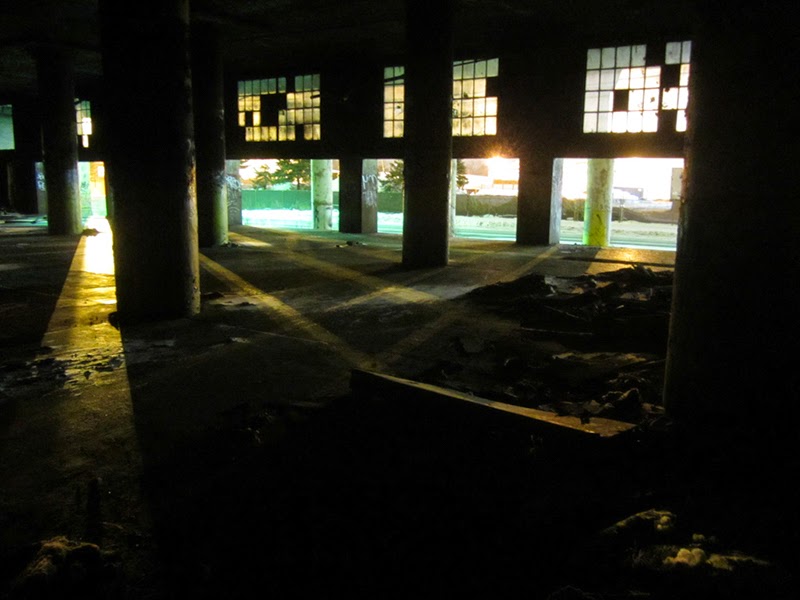 Inexplicably, I made another return trip to this turd a week later when some colleagues came in from out of town. 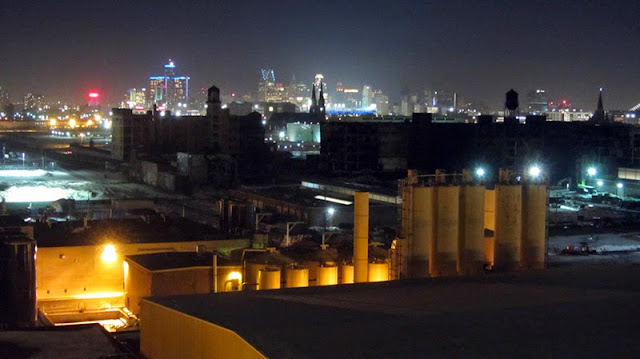 By that point the fire at Fisher Body #10 was out and it was possible to see the carnage: 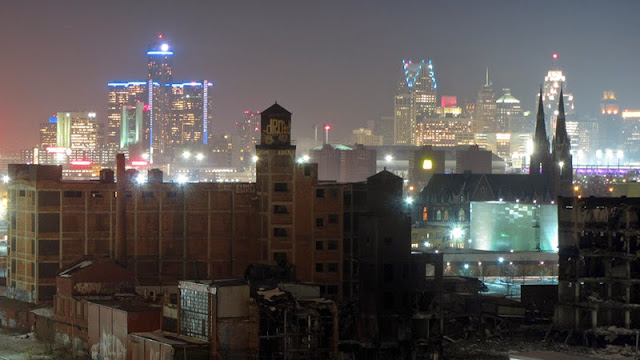 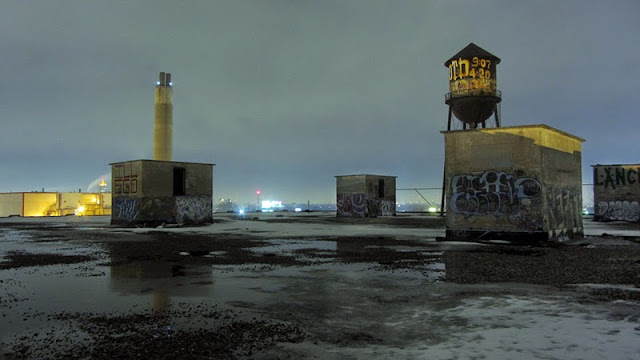 The ambient lighting is actually such that you can get some really nice long-exposure night shots up here. That is, if you can keep your fingers working in subzero temperatures. 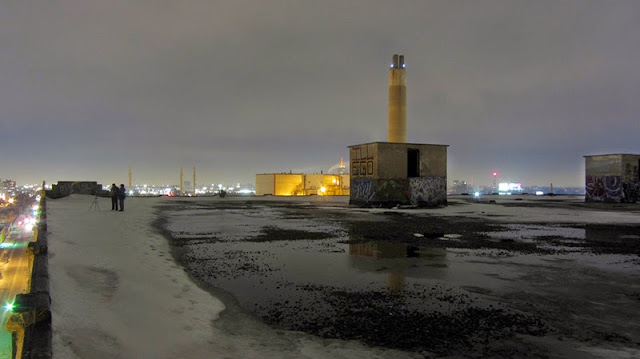 The arctic blue of the sky is no illusion...it was unspeakably frigid when I took these shots: 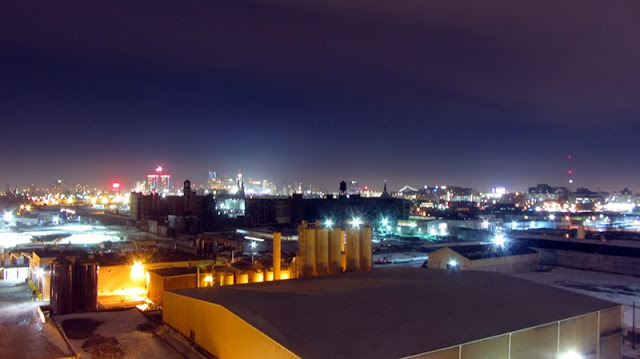 Thankfully the bitter temperature kept down the rotting garbage smell from nextdoor however. 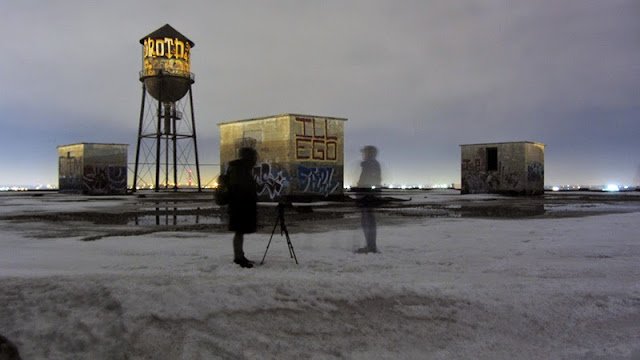 Well, I guess some people never learn--I keep coming back to this sh*t-hole. It does have such a spectacular view from the roof though... 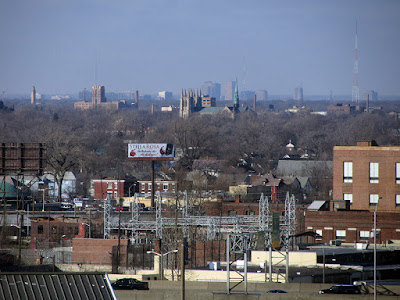 You can see the skyline of the city of Southfield in that shot. In this next one, You can see St. Stanislaus Church, and the GM Poletown Assembly Plant: 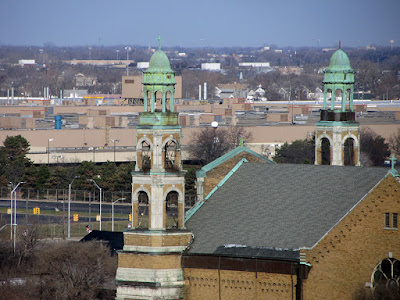 Closeup on the GM plant, with the skyline of the city of Warren in the distance: 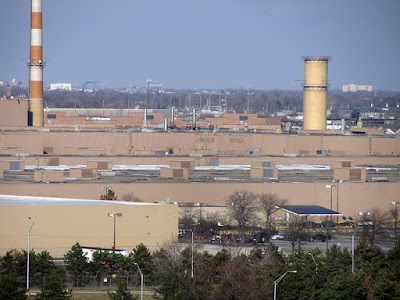 And here is Milwaukee Junction, with the old Murray Body Plant (Russell Industrial Complex), and the Ford Highland Park Model-T Plant in the distance: 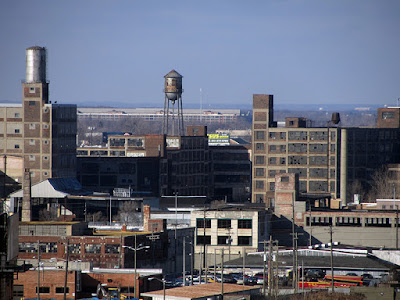 This view shows the steeple of St. Florian Church in Hamtramck: 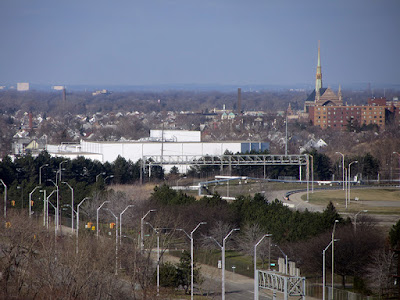 Here is St. Hyacinthus Church, with the Chrysler Jefferson East Assembly Plant and the Winston Hotel in the far distance: 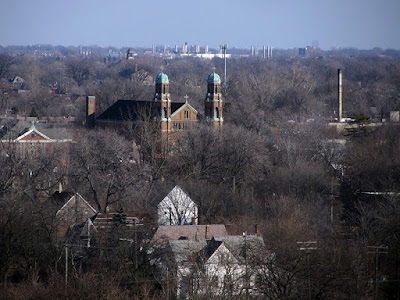 The good old Packard Plant fills up this next shot, while the "Nine Mile Tower" in St. Clair Shores shimmers on the horizon: 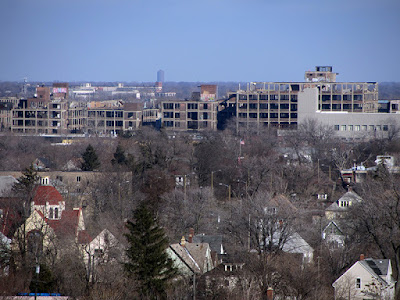 This railroad line going underneath I-94 is the same one that makes its way up from the Dequindre Cut: 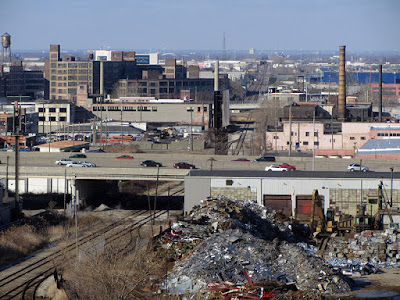 It goes all the way from the Detroit River to Pontiac: 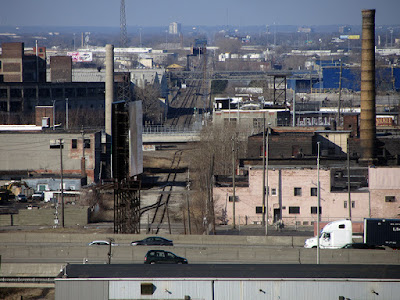 I did say this place was a sh*t-hole, didn't I? 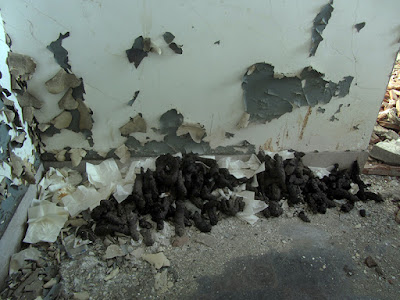