From Sugar Island, I aimed for the “Hole-in-the-Wall,” an opening in the continuous breakwall that forms the straight sides of the Livingstone Channel, planning to follow the channel up to the north end of Stony Island before turning into the lagoon there.

As soon as we entered the mouth of the lagoon, we found that plenty of other boaters were already here enjoying the calm waters, many of them rafting their boats together to create floating party houses. We were on a mission however, and continued past the revelers and back into the lagoons. 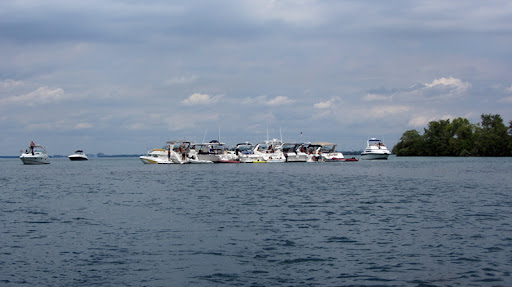 Stony Island was originally used by the Potawatomi tribe as a camp for hunting and fishing, but was "deeded to the Macombs of Grosse Ile in 1781," according to an article by Mary Ginnebaugh of the Grosse Ile Nature and Land Conservancy. The family of General Alexander Macomb owned many islands in the Detroit River. Supposedly the original Potawatomi name for the island was "Indowaga."

It is even said that the limestone for Fort Pontchartrain in Detroit was quarried here in 1701, although I doubt very much of it was needed for that small, palisaded outpost. It seems more likely that stone was taken for nearby Fort Malden, in Ontario.

There was also a legend that before the Civil War Stony Island was a jumping-off point for fugitive slaves on the Underground Railroad, and that it was "here Eliza is supposed to have crossed the ice, bloodhounds in full cry," a reference to Uncle Tom's Cabin. 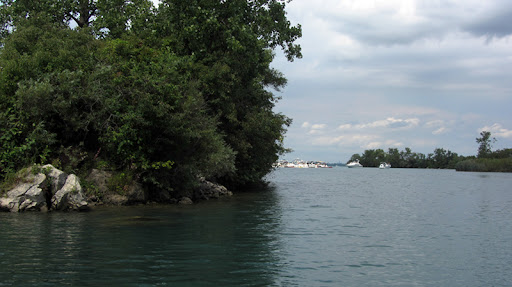 On our left, some wrecked barges, and a marker beacon of the shipping channel we were just in, sticking up from behind the trees: 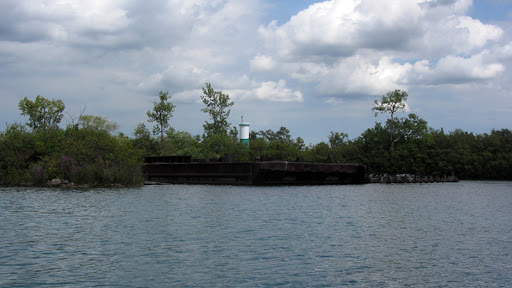 You may have noticed the odd, artificial shape of Stony Island if you’ve been looking at the aerial maps. It’s definitely partially manmade, built out with spoils from dredging, like many similar islands in the vicinity. Moreover, Stony Island was the base of operations for the Dunbar & Sullivan Dredging Co., who seem to have been the ones responsible for the barge graveyard we were now gingerly cruising through. They sold off their headquarters here on Stony Island in 1990.

In fact, even some of the landmasses we were passing by had upon closer examination apparently begun life as barges too: 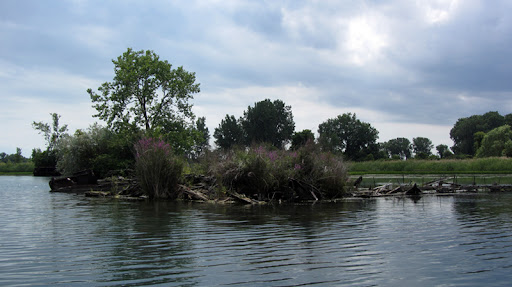 When was the last time they were building barges out of wood? If you recall, Dunbar & Sullivan was the entity that purchased Sugar Island from the failed Sugar Island Amusement Corp. in 1948.

We were in some really sketchy shallows here, so I was paying extra close attention to where we were going. Around another corner I spotted some more wreckage that looked to be a little more intact: 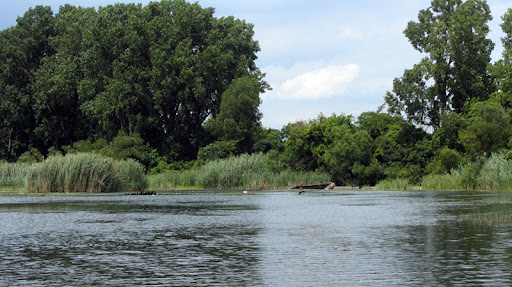 I slowly began idling over that way, being ultra cautious of the many submerged obstacles: 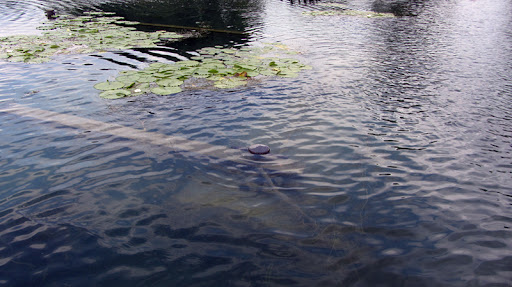 The only reason I was even able to get back here at all is because my boat drafts so shallow, and because the motor I have on it is likewise extremely short.

Here looks to be the ribcage of a very old boat indeed: 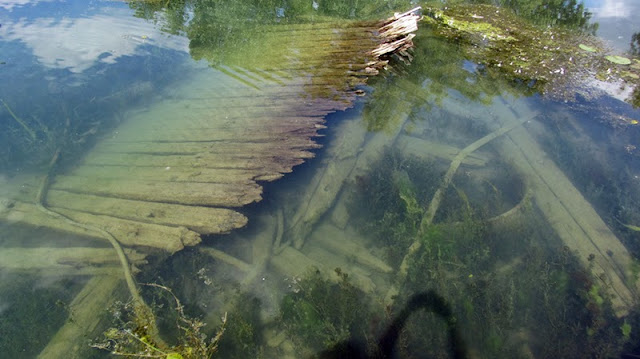 In 1956 Free Press writer Jack Grenard was evidently as intrigued as I was by the apparent ship graveyard shown on navigational charts at Stony Island, and mentioned it in a piece he wrote on local shipwrecks. He quoted the custodian of Fort Malden National Historic Park as saying that the wrecks here were mostly scows, drills, and dredges, and that most were still serviceable back then, had Dunbar & Sullivan decided to raise them.

I was actually standing up now as I was piloting us, so as to be able to see down into the water better. 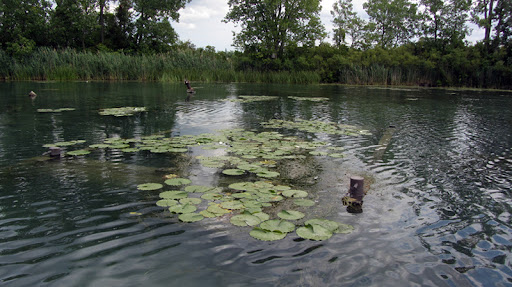 I approached what looked to be the tilted hull of another sunken barge. Behind it lay some long steel cylinder sticking above the waterline: 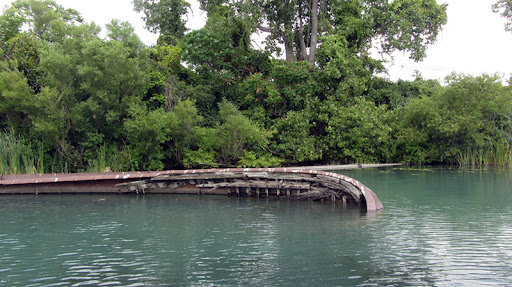 It's funny how corporations are allowed to leave behind hazardous messes of this magnitude with hardly a slap on the wrist, yet if we citizens so much as let our grass get too long the government comes down on us swiftly with fines and tickets.

Notice the large black funnel of a passing freighter behind the trees: 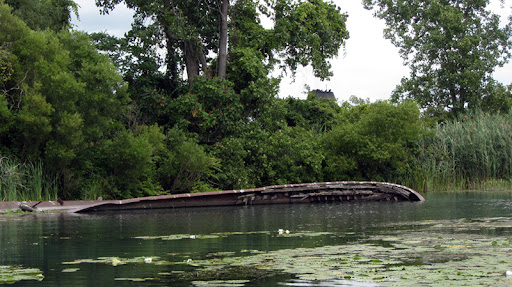 Remember we are barely 200 yards from the Livingstone Channel here. Seeing a disembodied ship mast or smokestack moving behind the rows of trees like a shark fin became a common sight, as well as the throbbing bass sound of their engines.

This back corner of the lagoon seemed to be a marsh-clogged dead end so I spun us around and back toward the more interesting stuff before we got stuck. 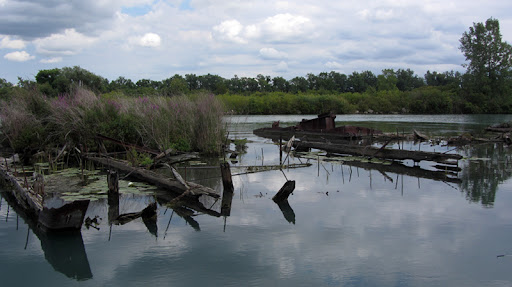 According to Mary Ginnebaugh again, over 23 species of migrating waterfowl have been identified on Stony Island, and its 100 acres includes wetland and upland areas, with some old-growth stands of giant chinkapin oak, cottonwood, and even hackberry trees. The island also provides spawning grounds and habitat for 65 species of fish, including perch and walleye, two of the most popular game fishes.

A Detroit Free Press columnist wrote an article back in 1961 entitled "Why Humans Shy From Mysterious Stony Island," that said white crested egrets and black night herons—both rare and defensive birds—as well as the more common blue herons, had separate groves here, "sort of like bird subdivisions," which all arise in "horrid cacophony" upon human intrusion. He also wrote that the island was infested with rattlesnakes, in what seems like an obvious attempt by a nature lover to keep uncouth picnickers off of his beloved sanctuary island. 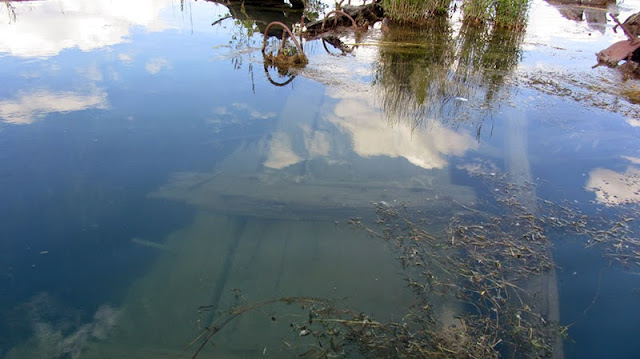 She writes that the Grosse Ile Nature and Land Conservancy moved to purchase Stony Island through the Michigan Natural Resources Trust Fund in 1997. Another article says that the state bought the island from Ohio businessman Victor Ponziano for $650,000 "to keep it out of developers' hands." The DNR is doing a level one contamination study so that the legacy of Dunbar & Sullivan's pollution can be remediated, and I suspect that the island will soon be made off-limits as a wildlife sanctuary, like Sugar Island.

I navigated us carefully between two overgrown piles of interesting looking wreckage. 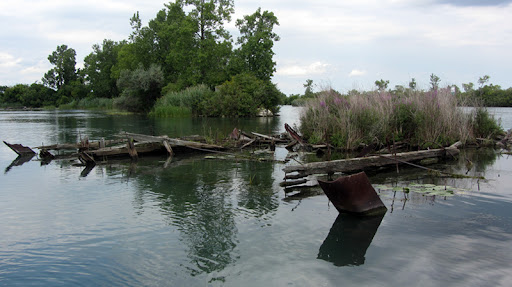 Indeed, parts of the island itself were literally made up of wreckage that plant life had taken root in: I had to guess there were the remains of at least 20 different vessels all jumbled up in here in some sort of mixed-up order. Sometimes it was hard to tell where one rotted timber hulk ended and the next began. Suddenly I looked down into the surprisingly clear patch of water to see… 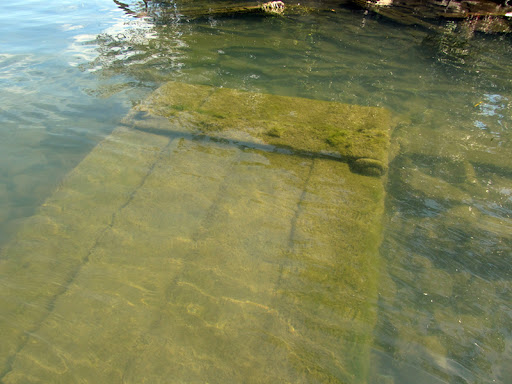 …a hinged lid, or door of some kind? It was as big as my boat, and oddly intact compared to all the other wreckage around. It looked over 100 years old, like something you might see on a Nova documentary about discovering the wreck of a sailing vessel from a lost expedition. 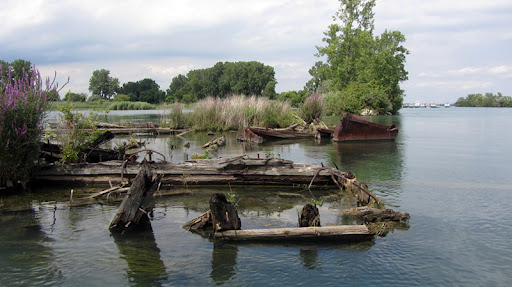 I knew there was a small paved concrete area here on Stony Island that had once been part of Dunbar & Sullivan’s boatyard, and that was where I aimed to set us up for our lunch and midday siesta. I noticed that this steel structure sat there, but due to the obscuring overgrowth I couldn’t tell whether it was part of a ship or was just a steel building: 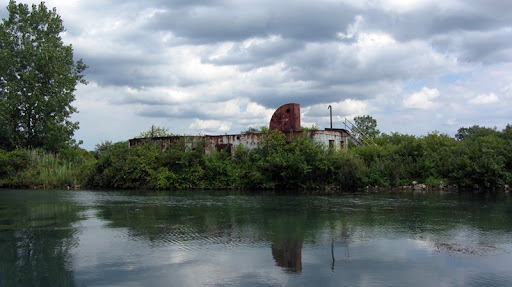 Before we could land there however, we had one more thing to check out in this particular lagoon. Sure enough, just as I had surmised from aerial imagery, there was a still-floating ship here with a forest growing out of it. At least one of the trees was about 40 or 50 feet tall, with a trunk thick enough for it to be 10 or 20 years old: 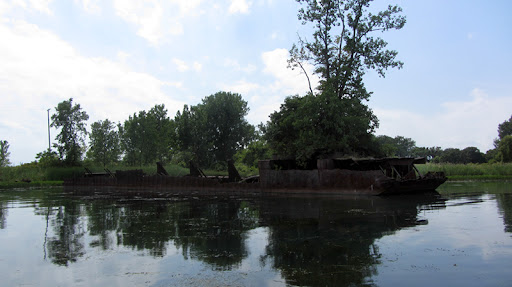 I slowly moved us up alongside, to see if it could be boarded. 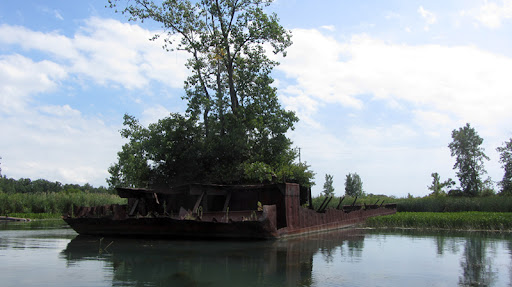 It had been so raged on it was hard to tell whether it had been a real ship, or just a barge. Clearly it had been either set on fire and burned away, or the scrapper’s torch had been feasting on it. 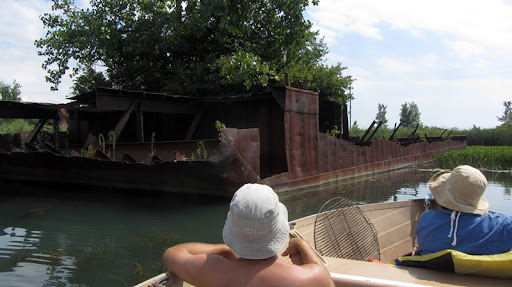 I was guessing the latter. 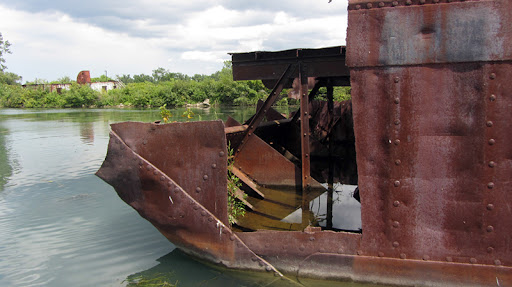 I hastily clambered aboard, only to find out that not much remained inside either. It was so hacked up that it was difficult to discern what function it might’ve originally served, but you can tell the hull used to have a much greater draft before it was hacked up for scrap: 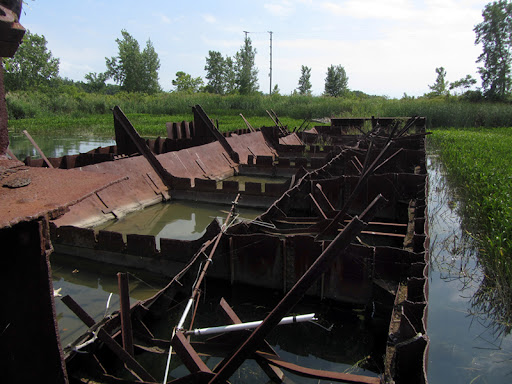 Why they left the bones behind remains a mystery. There is little information online telling of the history of Stony Island, so I’m afraid I can’t tell you anything more about this vessel or its many skeletal brethren lying in pieces about this unkempt nautical ossuary. The only history I could dig up was that of the Dunbar & Sullivan company itself:


The Dunbar & Sullivan Dredging Company was founded in 1844 in Buffalo, New York. Corporate headquarters were moved to Detroit, Michigan, and then to Cleveland, Ohio. The Detroit facility remained as a branch office and equipment yard. Dunbar & Sullivan was actively involved in the development of the marine navigation support infrastructure in the Great Lakes and the Mississippi Valley. Their operations included submarine rock excavation, hydraulic and dipper dredging, land reclamation by hydraulic fill, ship channel dredging, river and harbor improvements, dock construction, pile driving, and pipeline and cable laying. It was Dunbar & Sullivan whose services have created, improved, and maintained navigational infrastructure in the Great Lakes and Mississippi River since the mid-nineteenth century. They also constructed bridges and municipal sewage treatment plants.

Turning to my bookshelf, I learned that Detroit historian Clarence Monroe Burton says that Dunbar & Sullivan was founded when Michael Sullivan joined C.F. Dunbar's dredging business in Buffalo around 1867. I am still not sure exactly when the company moved to Detroit, but a USGS document and a court case seem to point to the mid-1870s. Mr. Sullivan was retired by the time Burton was writing his History of Wayne County in 1930, in which he calls Sullivan "the world dean of dredgers," with no one else having been in the business as long as he. Dunbar & Sullivan originated the method of blasting rock with dredging, and had recently completed the Windsor Tunnel, Burton notes. 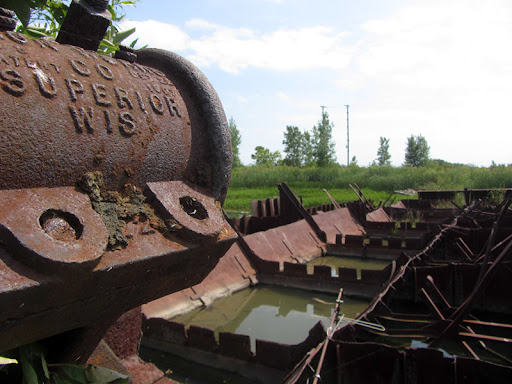 Dunbar & Sullivan ceased operations in 1987, and a series of auctions were held at their facilities to dispose of their vessels and equipment. Bowling Green University has in their archives many of D&S's company records, including a list of contracts they worked on. Some Michigan-related ones that the astute reader may recognize, include: 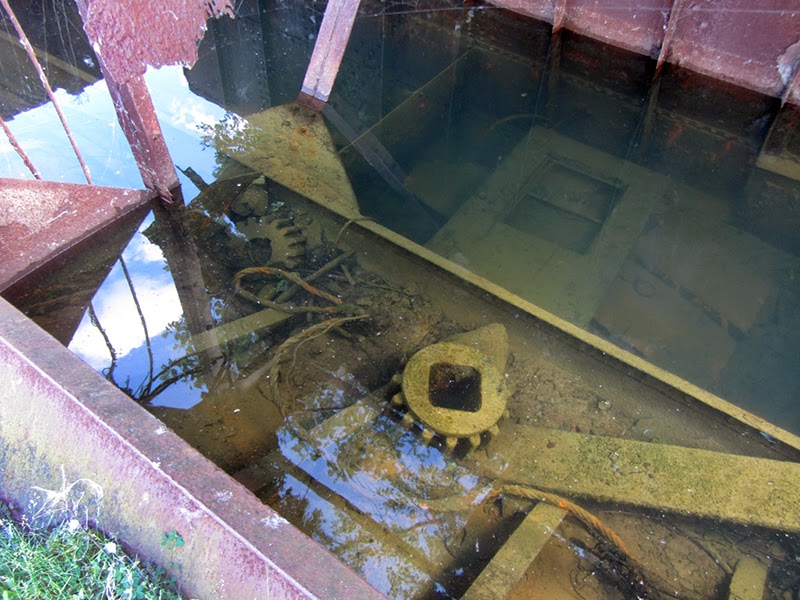 I think someone lost their BBQ grill in there: 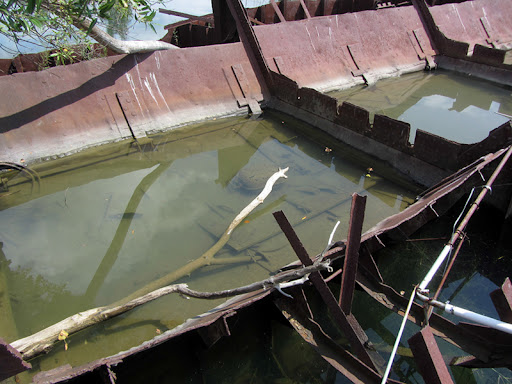 It appears that there’s some kind of hinged panel system involved here; this vessel was more than just a container barge for holding spoils dredged from the river bottom. The swinging panels on the underside of the barge were undoubtedly for dumping the spoils through the bottom of the hold once it had been positioned over an area to be filled in.

I re-boarded the SS Jane and we made a beeline for land. The roof stairwell hatch of the metal structure there seemed to be emblazoned with “? ? ? DETROIT, MI”...