Putting in the Leg Work

After leaving Port Huron behind, in Sanilac County we happened upon the old Freiburg School, a rather attractive old structure made of nice yellow brick: 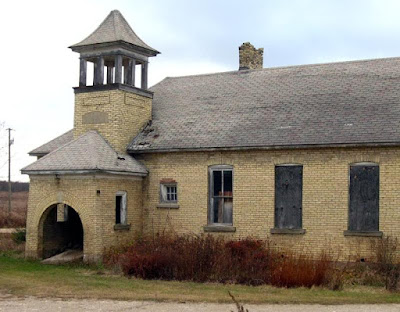 No sooner than we had stepped out of the car however, somebody pulled off the road claiming to be kinfolk of the property owner, and demanding to know what we were doing with his aunt's schoolhouse. So I was forced to take a few snaps from the road and depart without seeing the inside.

Our next stop was the village of Tyre, where I knew there was an abandoned grain elevator to be investigated. 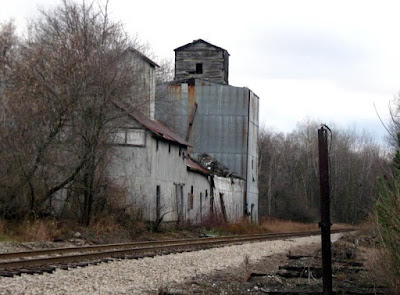 This was one of those ones that I was into only because it meant I could check off a new county; normally I wouldn't go to nearly this much trouble for some inconsequential agricultural ruin, but it was about the only remotely noteworthy ruin I could come up with in Sanilac County.

Thankfully, I was about to be delightfully surprised at how cool it was inside, because in the process of getting up to it I had to wade through a tangle of thorns for about 200 yards, followed by dunking my whole leg into a freezing, muddy creek. The rattle of a quad-runner's 2-cycle engine slowly prowling somewhere off in the woods nearby, and the fact that it was rifle season also made this mission a little intimidating.

This unsuspecting little place was about to teach my jaded city-slicker mind that farm ruins can be just as interesting as city ruins. For some reason I've always had it in my head that every barn, every elevator, every silo, every farmhouse was all bland and identical to the last, and not really worth admiring. Not sure where I got that mentality from, but in any case it's gone now.

Sanilac County was set off from St. Clair County in 1827, pioneered and first settled in 1834, and organized in 1848. It was named after a chief of the Huron tribe. "Political unrest in Ontario and the promise of jobs in the lumber mills" brought many Scottish, Irish and English here from Canada, according to a brief history of the county. The "unrest" being referred to was the Patriot War of 1837, which embroiled the entire border between Michigan and British Ontario for about a year.

Sanilac County has always been a quiet place, and there is nothing much going on here, except for the farming of sugar beets, corn, wheat, oats, soy beans, and hay, and it has remained sparsely settled, like much of the Thumb region. It is the largest county in the Lower Peninsula. One very interesting tidbit that it contains however is the site known as the Sanilac Petroglyphs, which I have still never successfully managed to see (it is a secured DNR site with sporadic access times).

According to the compendious and venerable ghosttowns.com, the village of Tyre was founded in 1857 by Alex Soule, John Getty, "and others," was a station on the Pere Marquette Railroad, and had a post office from 1863 to 1964. This information seems to be pulled from the book Michigan Place Names, by Walter Romig.

A book, Sanilac County Ghost Towns & Historical Photos by Janet Wallace, seems to indicate that by 1855 Tyre was already thriving, and that it boasted a general store as well as a post office and hotel tavern. The book also notes that this elevator was already in business by that point (May 1855), and that it was operated by the Snover Grain Co., managed by William Franzel.

Wallace says that the village of Ubly was founded not long after Tyre, and that many of Tyre's buildings were moved there at that time. Peter Sparling, Samuel Soule, and Joseph L. Dominick "still had faith in their home town," and resisted the trend toward relocating their buildings to Ubly.

The story goes that the Soule family named the town "after Biblical Tyre because of its stony terrane." Much of Tyre was wiped out during the Great Michigan Fire of 1871, but it was rebuilt.

Tyre burned for a second time, in the Thumb Fire of 1881, and once again had to be mostly rebuilt. Settlers at that time were mainly English, Scottish, Irish, Bohemian, and Polish farmers. In 1894 there were two general stores; one closed in 1954, and the other stayed open until 1978.

If the Snover Grain Co. originally built this elevator around 1855 as Wallace's material seems to show, then that means it would have burned down in probably both the 1871 and 1881 fires, and was rebuilt for a third time. I wonder if somewhere under all this splintered wood, there was a twice-scorched 160 year old stone foundation?

An interesting story about Tyre's local doctor in the 1900s was submitted to ghosttowns.com by a Michael Hicks. Hicks writes that one of the graves in the old Tyre Cemetery is that of John Wesley Sparling, who died suddenly and mysteriously on in July 1909.

A year later, Sparling's eldest son, Peter, fell ill in a field where he was working and died five days later. Albert, the next oldest Sparling, became ill in church a year after Peter died, suffering from the exact symptoms as his father and older brother, and died in May 1911. Dr. John MacGregor treated each of the Sparlings in each case. 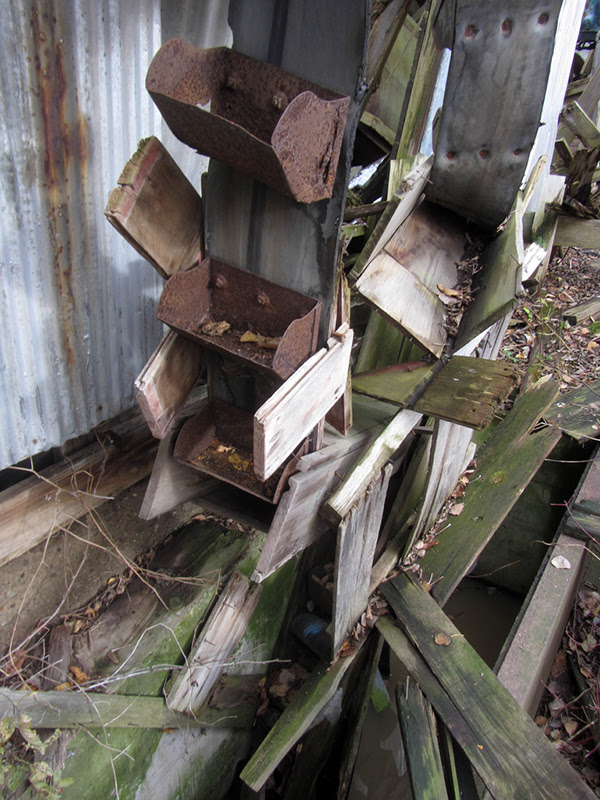 In August 1911, the unexplained symptoms struck a third son, Scyrel Sparling. This time Dr. MacGregor called in a colleague, Hicks wrote, a Dr. Conboy, to examine Scyrel. Dr. Conboy suspected poisoning and reported this to the police. Scyrel died in August 1911, leaving only Raymond Sparling, the youngest son, alive.

The prosecutor ordered an examination of Scyrel's organs and it was found he had been poisoned with arsenic. The body of Albert Sparling was exhumed and found to likewise show traces of arsenic. Hicks claims that Dr. MacGregor was arrested and tried for the murders of the four men; the story had by then gained national attention. The apparent motive in the killings was that the good doctor was alleged to have taken a shine to Mrs. Sparling, and wanted the Sparling men out of the way.

Dr. MacGregor was found guilty of first degree murder and given a life prison sentence. Five years later, he was pardoned by Governor Ferris, who Hicks says refused to give his reasons for the pardon. "The Governor shortly thereafter appointed MacGregor as the official state doctor to Jackson Prison, where he had just been an inmate, again without explanation." Dr. MacGregor remained in this capacity until his death in 1928, according to Hicks. A much more detailed version of this story can be found on Murderpedia.org.

Dr. MacGregor was about a year too late to have run into Frank Porter Glazier while incarcerated in Jacktown. Both of them served time around the same period, both were given special treatment while inside, both were given gubernatorial pardons, and both have been discussed in posts here on nailhed.com.

Most of the middle structure had been turned into a crumbled bowl of shredded wheat. Luckily the southernmost building was in good shape.

Across the access road from the elevator stood some ruined old cobblestone building, which didn't seem to necessarily be related in any way to it:

I was nervous about approaching it because I could easily be seen by the neighbors; maybe on my way out I'll sneak over there. First things first, I needed to see the inside of this place:

Conveyor scoops, riding on a belt of canvas:

In this warren of hand-carpented, shaft-driven, grain dispensing implementia, it was easy to slip into a nostalgic reverie of the bucolic utopia that is so commonly ascribed to America's almost folkloric agricultural past, and the "simpler times" that everyone so desperately (and naively) wishes would return.

Behind the bin sat hidden this old gilded-age scale, wrought of cast iron with fancy fluted columns holding it up: 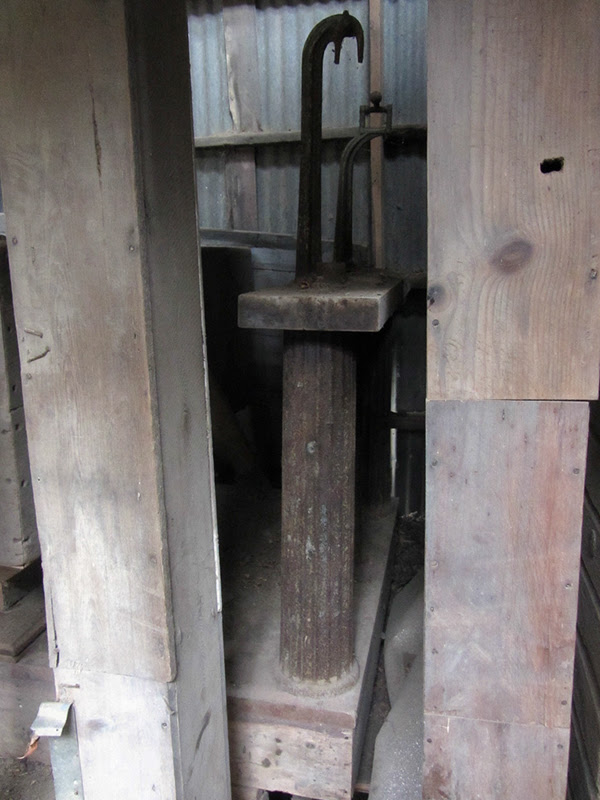 It doesn't get much more old-timey Middle-American-nostalgia than that.

The town of Snover is a few miles to the southwest of Tyre:

The canvas drive belt was still in place on this old pulley:

This machine appeared to have fallen from the second story:

Now it was time to go check out that other cobblestone building across the way. 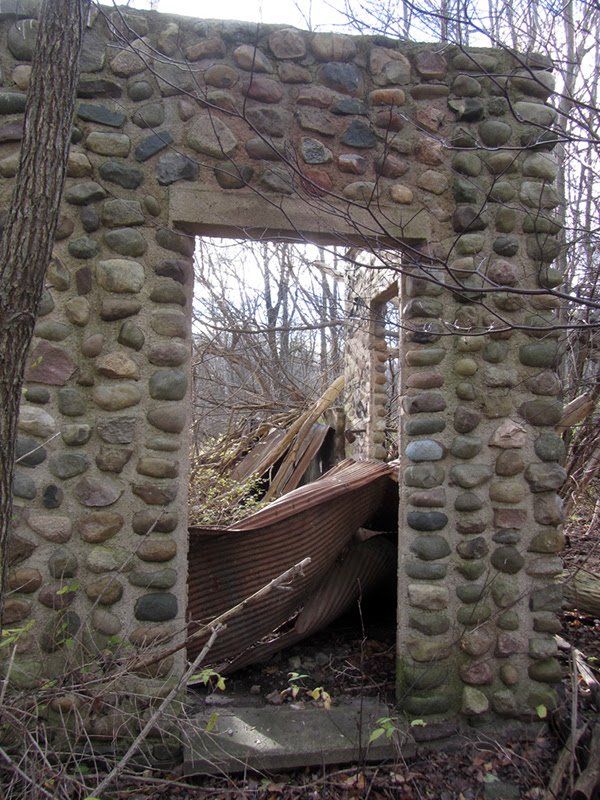 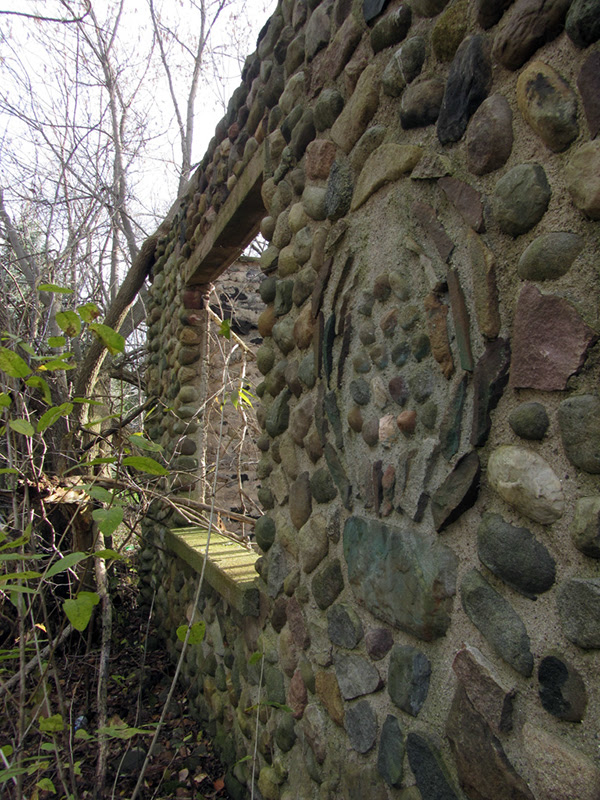 I'm not sure what it was, but it sure was fancy.

Looking back at the elevator:

Surprisingly, an old map shows there to be a depot of the Flint & Pere Marquette RR sitting on the opposite side of the train tracks from elevator. Google Earth's imagery is too hazy for me to have seen whether there might be any foundation remnants of this structure still extant, and unfortunately I didn't really go over there on foot so I suppose it's certainly possible that traces of it could be hiding in the undergrowth.