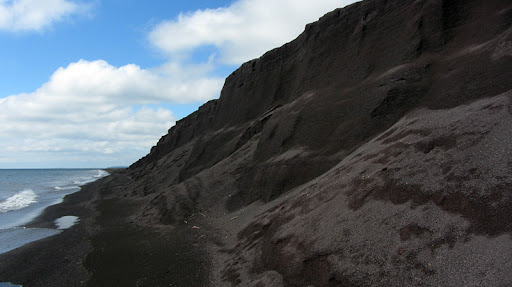 Actually this is the beach at Gay, also known as the Mohawk Stamp Sands, and the cliff is only about 20 feet high. But I want you to take a look at this aerial view…

Now, zoom out and see how vast it is, and see how far the wave action of Lake Superior has pushed it down the shoreline from the mill site. It’s like the black volcanic sands of Hawaii, but these were not erupted from a natural volcano, these belched from the filthy bowels of Saruman’s furnaces, and represent one of this planet’s largest industrial scars. It is mostly just crushed rock (with trace toxins, I presume), but it absorbs and retains so much of the sun’s heat that no plant life can sustain within it, and it remains just a dead zone. 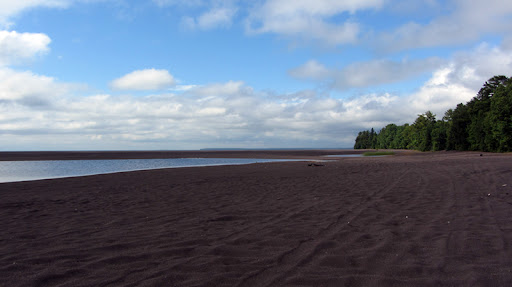 I’ve wanted to come see the stamp sand ever since I heard about it, simply because it is so ludicrously huge and so bizarre. Even though I’ve been to Gay before, I never managed to actually go out on the sands. I have seen many other stamp sands produced by other mills in the Keweenaw, but none even remotely compares to this.

Rutabaga shifted her Jeep into four-wheel drive and took us out onto the sands. We got out and I began wandering. 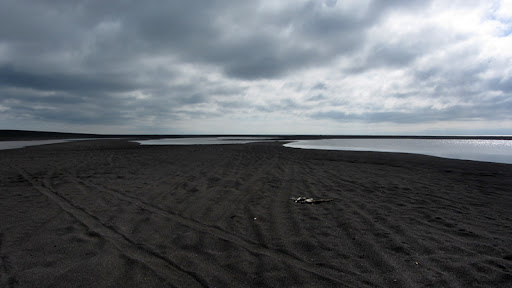 Rutabaga had already been here several times before, but I was transfixed by the otherworldliness of the barren landscape. 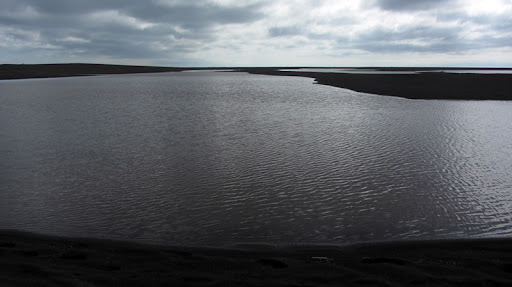 It was so vast that it had lakes of its own within it. I looked for signs of life in one, but didn’t see much. 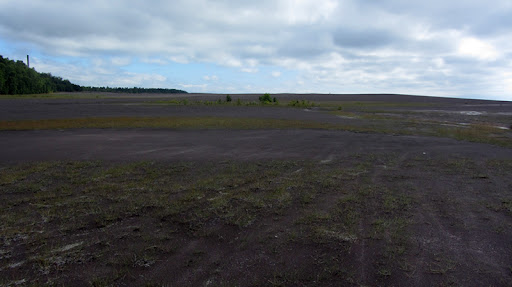 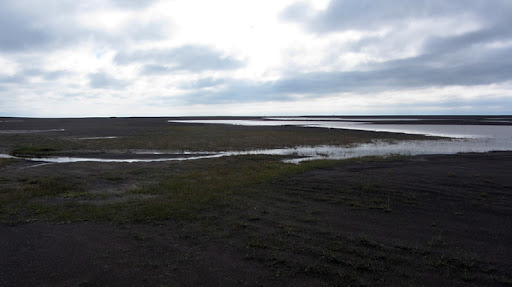 The gigantic smokestack of the Mohawk Stamp Mill loomed over the wasteland it created: 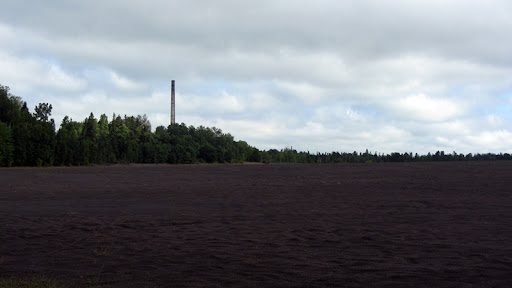 The line of trees represents where the lakeshore used to be. 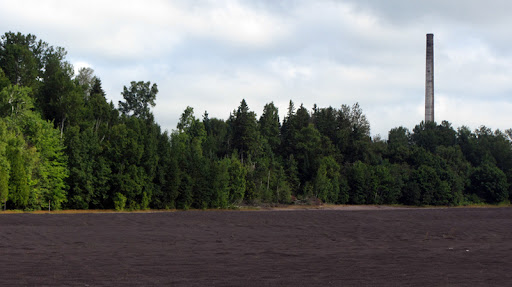 Off toward the northeast I detected a slight rise in the topography of the sands, and I felt that I should try and see if I could find a high vantage point to for a good overview photo. 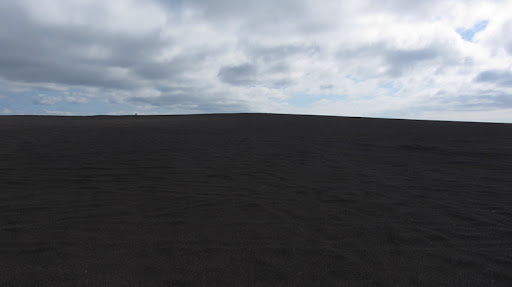 I noticed that I was now quite a long ways from where Rutabaga and the Jeep were.

It took quite awhile, but I finally reached what I figured to be the top of the stamp sand: 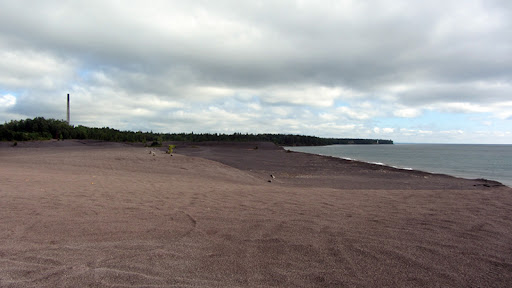 There were what looked like a few shattered ruins mostly buried in the black sands, and the smokestack looked even farther away than before, if that is possible. 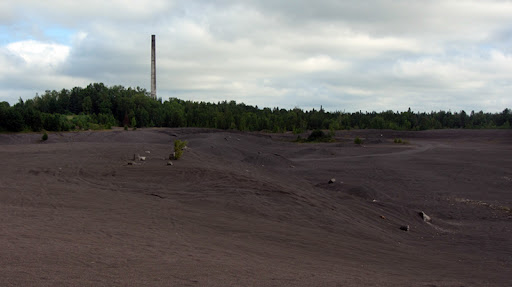 According to Lawrence Molloy’s Guide to Michigan’s Historic Keweenaw Copper District, Gay started as a lumber town, but by 1900 both Mohawk Mine and Wolverine Mine were looking to locate their stamp mills there. The president of both mines was Joseph E. Gay, hence the name of the town. 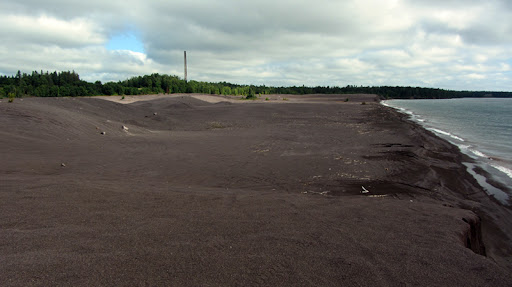 CopperCountryExplorer.com explains that stamp mills can be divided up into five distinct sections: the rock bins, the stamps, the roughing jigs, the refining jigs, and finally the wash floor.


These sections are built along a step-stair foundation, with each subsequent level a few feet lower the one previous to it. This allows gravity to be used to transport the copper/rock/water solution (slimes) from one machine to the next.

The Mohawk / Wolverine pump-house sat to the north of the mill, far outside the ability of the stamp sands to clog up the intakes.

As I explained earlier, we had just checked out the ruin of that pump house a little while ago. 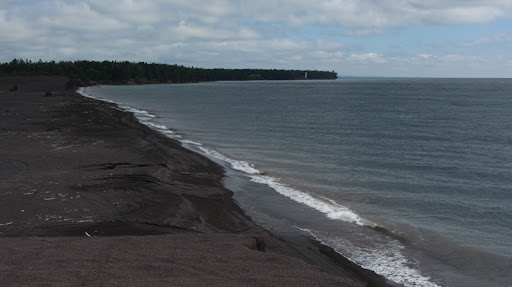 I looked back to see that Rutabaga was now so far away that she had nearly disappeared: 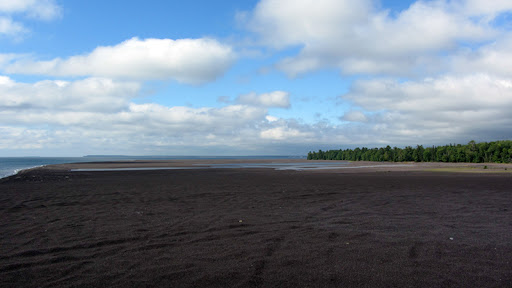 Can’t find her or the Jeep in that shot? How about now, at full zoom: 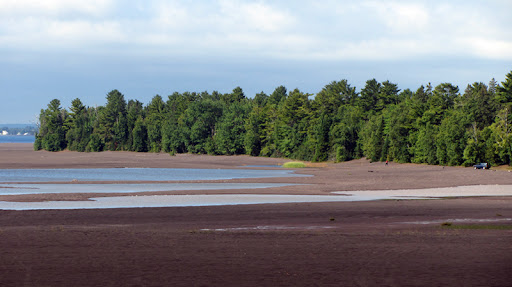 The Jeep is at extreme right, and she is a little bit to the left of it. 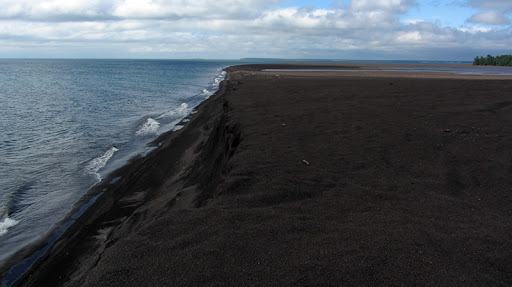 Despite the ecological disaster it represents, the stamp sand does possess a certain beauty I think. Down on the shoreline you can see the clear waters of Lake Superior lapping it into finer and finer consistency: 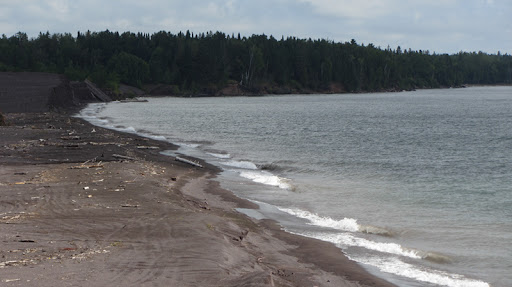 I went down for a different perspective. 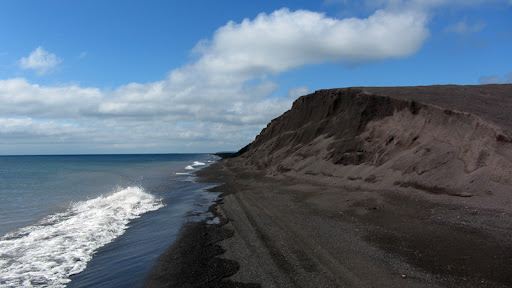 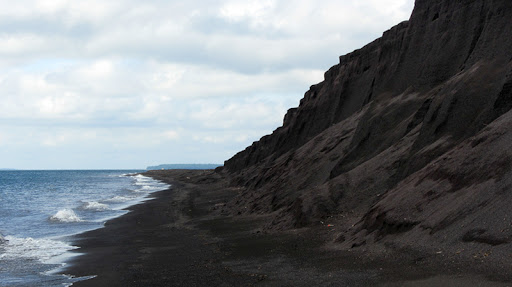 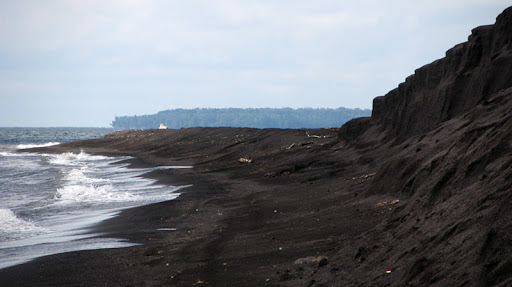 Up the shore in the opposite direction, I could see an old tunnel from the mill itself—once hanging precariously over the cliff—now cracked off and laying nose-first in the sand: 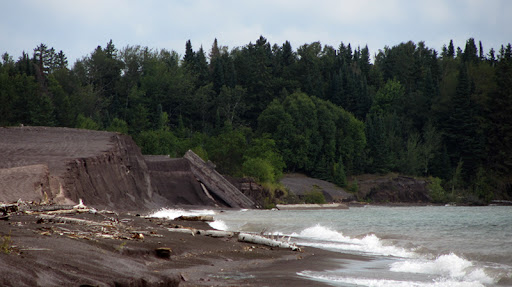 Despite the enormous silence and nearly impenetrable peace that I was enjoying out here, I imagined that Rutabaga was probably growing impatient and that I should head back the mile or two to the car that I had somehow walked while barely noticing. 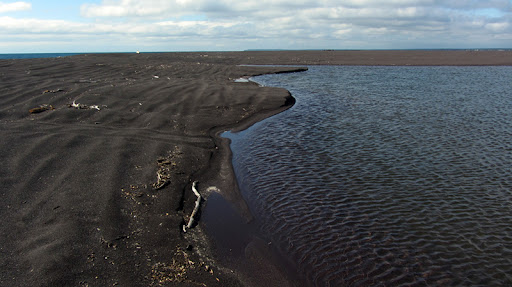 By this point I noticed that Rutabaga had got back in the truck and begun driving over to pick me up. However she was unable to see from a distance that she was basically driving into the center of a group of lakes, and was boxed-in. 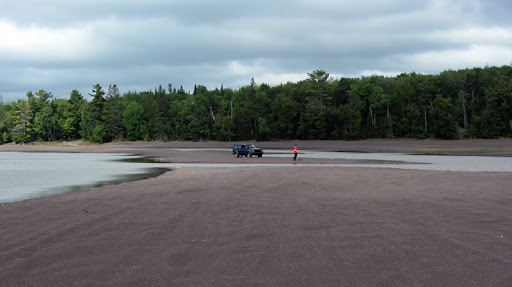 She managed to find a narrow spot between two lakes that looked like it might be crossable, but upon closer inspection she decided the sand was too soft, even for four-wheel-drive, and had to go back. 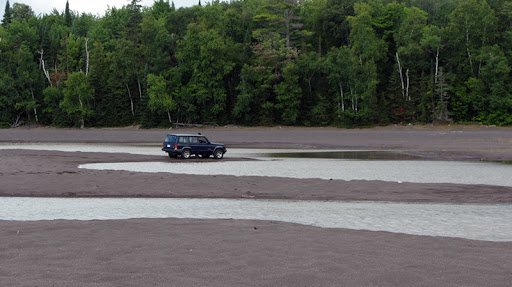 I also heard the sound of four-wheelers tearing around the dunes off in that direction. Since it’s basically a wasteland anyway, most local Yoopers seem to treat this place as the de facto fuck-off spot, where you might as well find a way to enjoy it—whether by shooting stuff, racing around in ORVs, or having bonfires. My initial attempt at seeing the stamp sands and mill ruins several years ago had in fact been interrupted, by the sounds of rapid gunfire in the immediate area.

Finally, I was rescued from the Anfauglith, and we were bumping along in our own dune buggy (the other off-roaders are barely visible on the horizon up ahead). We stopped at da famous Gay Bar for lunch and beers, as I was about to depart and begin my trek back home. At time of writing, there is movement on a proposal to finally remove the stamp sands at Gay after nearly a century of ecological desolation. 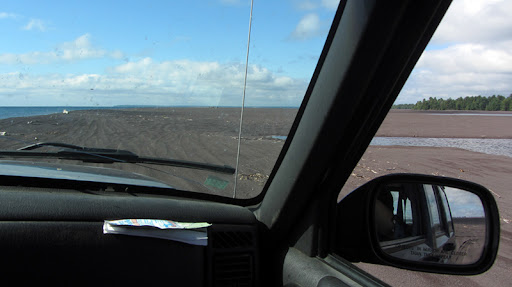 Across the street from the Gay Bar is the abandoned Gay School: 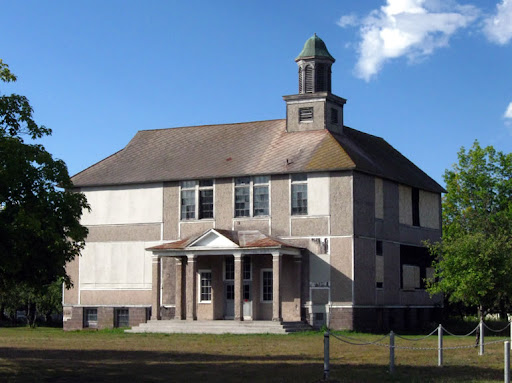 Despite its name I found Gay to be one of the least fruity towns I had ever visited, heh, and everyone here seemed to be pretty Yooper. The population of Gay is 60, and their 4th of July celebrations include the “Gay Parade,” which used to culminate in "da lighting of da smokestack"... 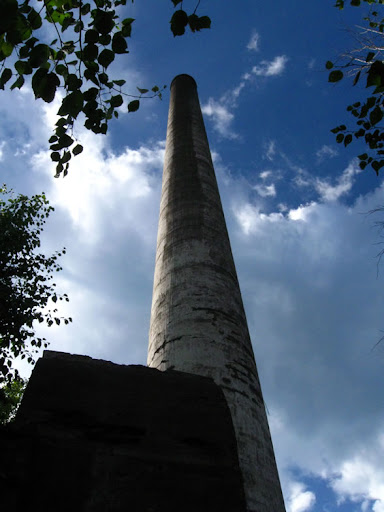 ...Which basically meant piling all their old tires and rubbish into the base of the stack, dousing it with gasoline, and sparking it up. The black cloud of death could be seen for miles. Either they ran out of tires, or the EPA climbed up their asses, but doze guyz don't light da smokestack no more, eh. 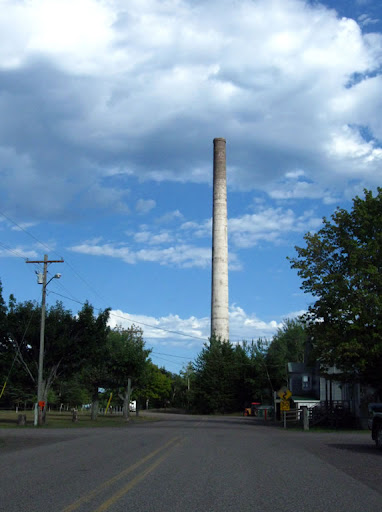