A Hole in the Forest

Tearing through the forested highways of rural northern Michigan can lead to interesting discoveries. 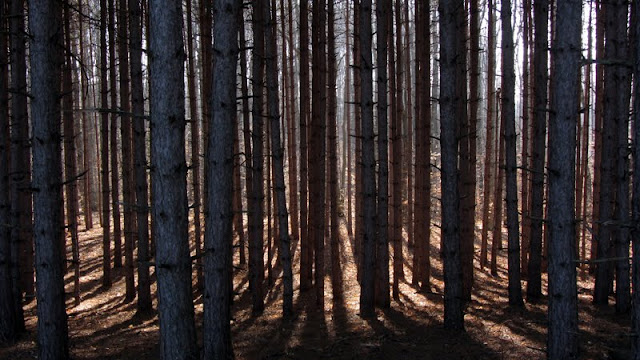 As my road popped out of the woods briefly while cruising through Alcona County (MAP) during a hunting trip, I set eyes upon this incredibly picturesque ruined farmstead near the gruesomely-named ghost town of Killmaster. Unfortunately the angle of the light was working against me, but I did what I could: 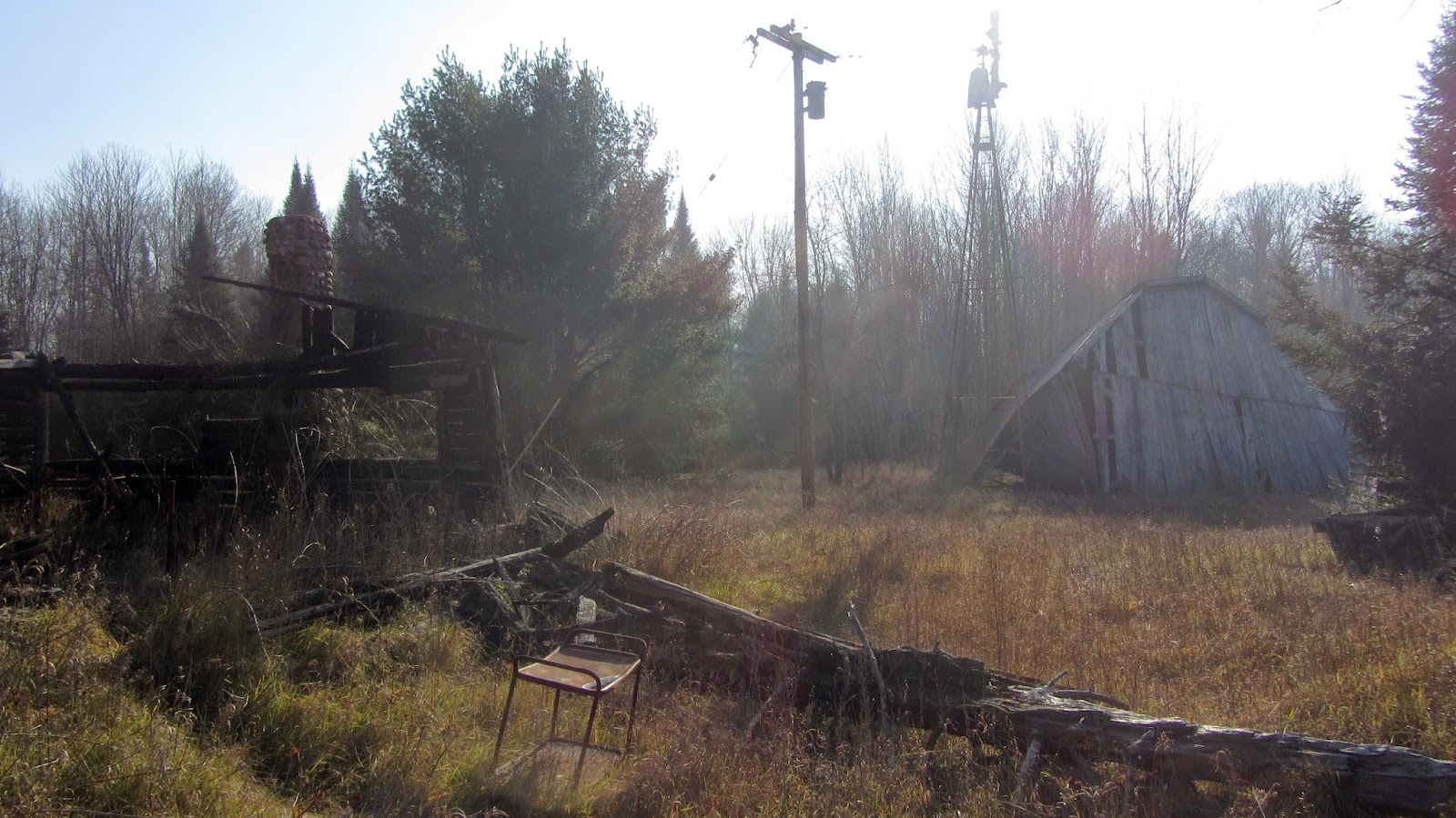 According to the Michigan County Atlas by David M. Brown, Alcona County was another of several Michigan locales named by Henry Rowe Schoolcraft, which in 1840 he dubbed with one of his pseudo-Native American place-names, intended to translate to "fine or excellent plain."

Not only is this one of the rare northern Michigan areas that is suitable for farming, but it has also had good hunting and fishing since time immemorial, and stone lance-heads dating to 9000 BC have been recovered at archaeological sites here, indicating that it was going on as soon as the glaciers melted. 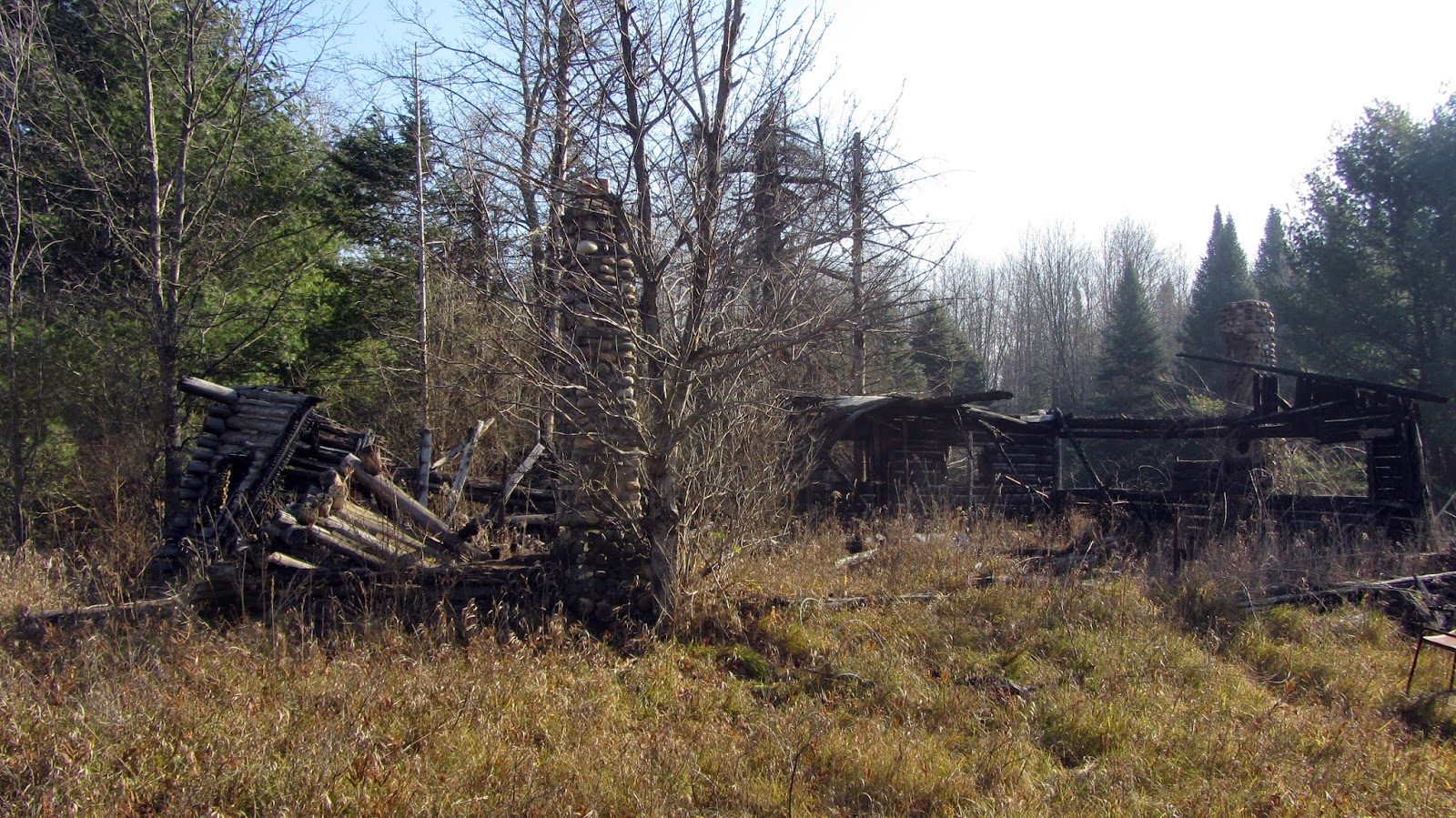 By the year 1000 BC this area was home to aboriginals who farmed corn, beans, and squash. According to Brown, ancient corn hills were still visible to European trappers and fishermen when they began arriving here in 1845. Early activity in Alcona County was limited to logging, fishing and farming, and it was organized in 1869. 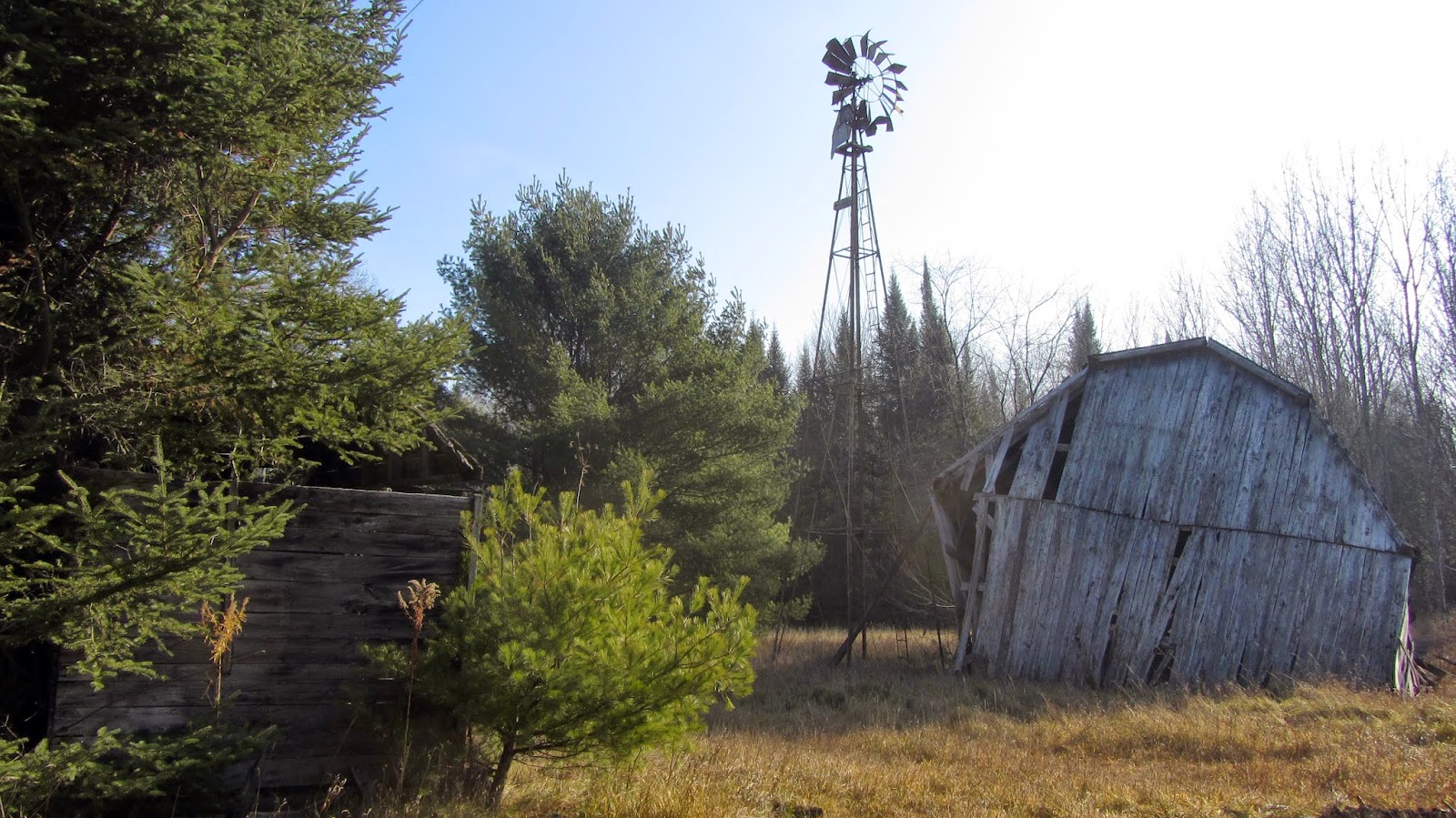 A fishing station built here in 1849 later became the headquarters of the Alger Smith & Co. lumber company, which according to one source, became the largest pine producer in the world from 1876 to 1880. The same webpage also said that aboriginals once commonly camped on Lake Huron's shoreline here, near "The Great Black Rock," and "placed offerings in its hollowed-out surface to ensure a safe journey."

Today, over a third of Alcona County is engulfed by the Huron National Forest. Logging is still important here, as all the forests that were replanted by our grandparents in the CCC during the Great Depression are now reaching maturity. Farming persists as well, producing beef cattle, alfalfa seed, berries and dairy. This particular farmstead didn't lend any immediate hints as to its product, but I was instantly in love with its log-cabin-style walls and cobblestone chimneys: 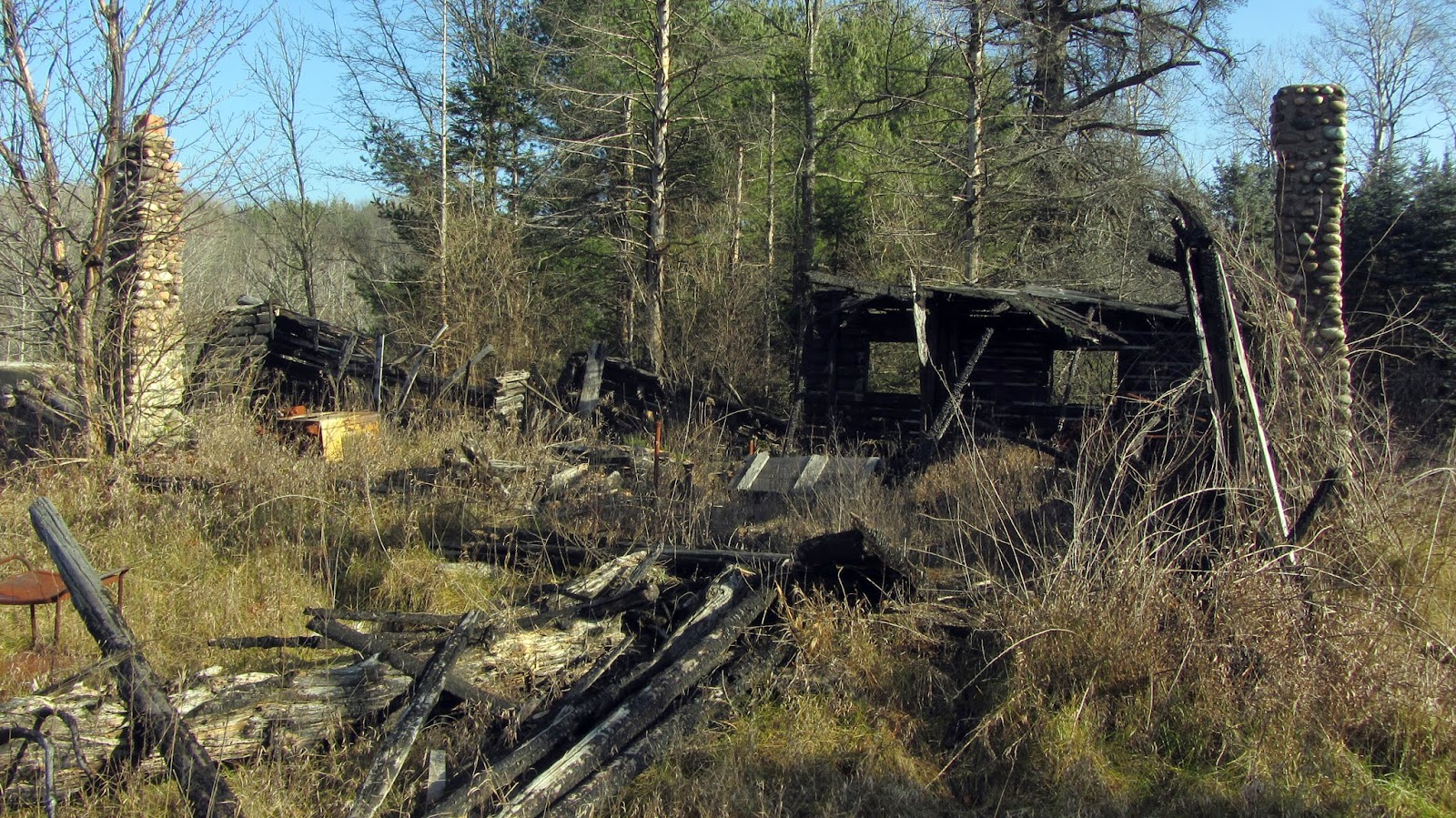 One of the strangest stories about Alcona County is told in Ghost Towns of Michigan, Vol. 2, by Larry Wakefield. In 1912 gold was discovered in northeastern Alcona County, while two brothers were digging a well on the Fleming family farm; absolutely nothing about the geology of this area suggests that gold should be found anywhere near here. Nonetheless they found a gold nugget, in the blue clay Alcona soil.

By the following spring the Flemings had incorporated and were selling stock certificates to back the large mineshaft that was being sunk in their backyard. Another nugget was found several weeks later, below 75 feet depth. Unfortunately there was a steam engine explosion, killing four men. The mine project was abandoned, and it quickly flooded with water. Or, so the story was told to Michigan ghost town guru of yore Roy L. Dodge, who was the first to write about it in his c.1970 book, Michigan Ghost Towns of the Lower Peninsula. 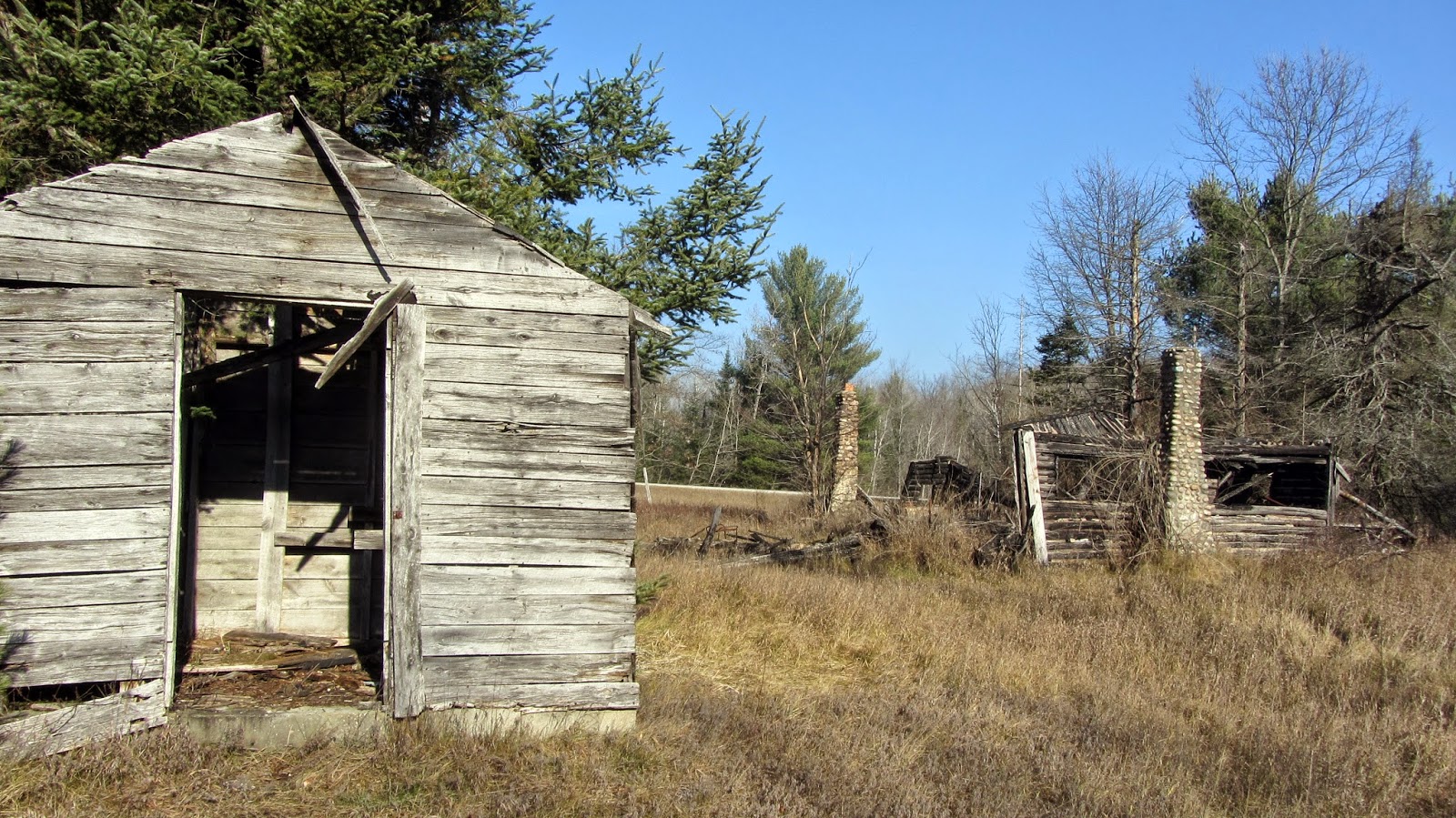 Wakefield notes with some caution that one of the Fleming brothers had visited Alaska a short while before  the "discovery" of the gold on their farm, and that furthermore there was no record in the newspapers or at the courthouse of any explosion, or any deaths. It became pretty evident over time that the entire operation had been a ruse; the brothers had salted the mine to boost investor confidence, flipped the shares, and faked the fatal disaster to cover their escape with the cash. They even started rumors that "some old man" had gotten rich by panning in the nearby creek in order to keep the gold fever going.

The abandoned Fleming mineshaft served as a trash pit for many years before finally being capped. It was said to have been "lost" and that "no one knew the exact location" of it, but this was just more smokescreen. It is worth noting that Roy L. Dodge's narrative of the incident speaks of old newspaper accounts telling that years ago Indians used to show up in Bay City and Saginaw, looking to sell large quantities of copper and silver, and that they claimed to have found it in this vicinity. 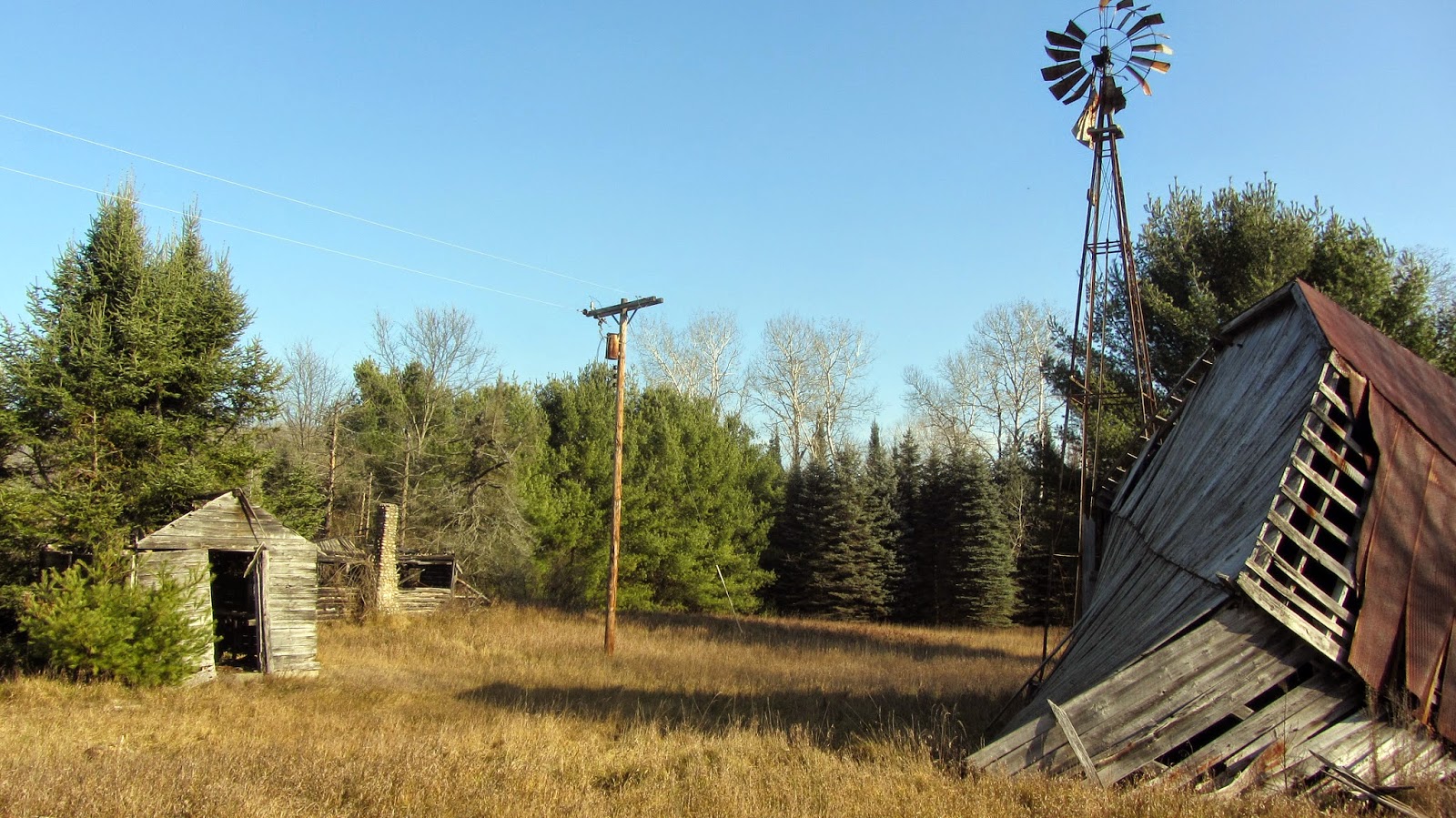 According to Dodge, Alcona County once boasted of at least 17 operating post offices; when he was writing in 1970, only eight still remained. This illustrates the broad population decline that has affected northern Michigan since the heydays of lumber, fishing, farming, and tourism--industries that have all either waned or completely perished in the postmodern age.

When I reached the county seat of Harrisville, I checked on the old Detroit & Mackinac Railroad Depot, which seems to be in the care now of a historical society, and no longer abandoned: 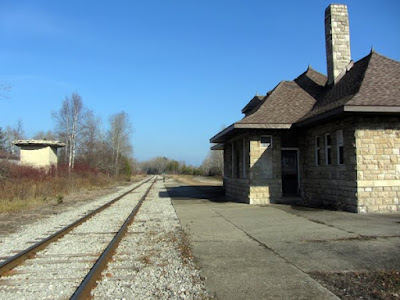 The ruins of the watertower are seen at left.