Wirt Rowland and the Irish Hills

One pleasant summer's day, we took a trip out through the Irish Hills, and spotted something in the town of Clinton in northern Lenawee County that was worth pulling over for. According to the state historical plaque out front, this place was called the Clinton Woolen Mill, and it was a vital part of the area economy for over 90 years. The original mill of the Clinton Woolen Manufacturing Co. was completed in 1867 but it burned down in 1886. 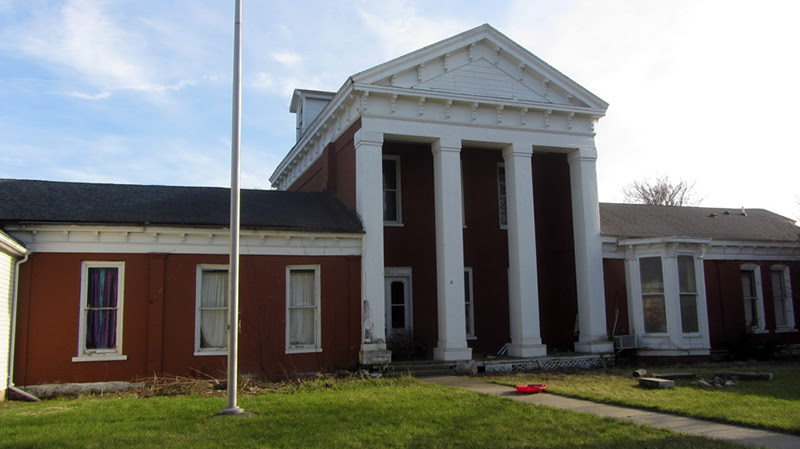 This building however (apparently the plant offices) was in the Greek Revival-style, which should mean that it was built between the 1830s and 1860s. Perhaps it was rebuilt off the original plans?

Nonetheless the plaque said that it was rebuilt, and up and running less than a year after the fire, thanks to the townspeople pitching in by raising money and apparently doing an 1880s montage. 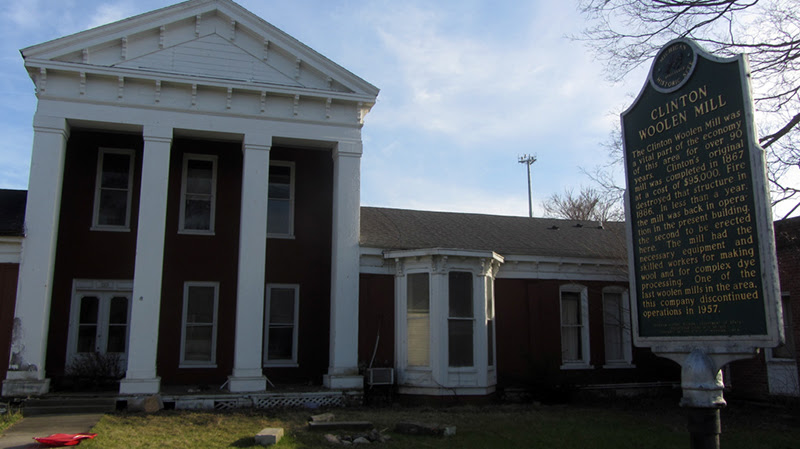 A village history timeline explains that they raised $10,000 to rebuild the mill, in just three weeks. That kind of thing is just completely unthinkable by modern standards; today we can't even be bothered to raise that much money for charitable causes, and I don't really know of anyone that would donate money to help a factory rebuild after a fire. Luckily we have politicians to hand out corporate welfare on our behalf, heh.

Anyway, this mill had the equipment and skilled labor force for making wool and undertaking complex dye processing. It was one of the last woolen mills in the area, keeping its doors open until 1957. 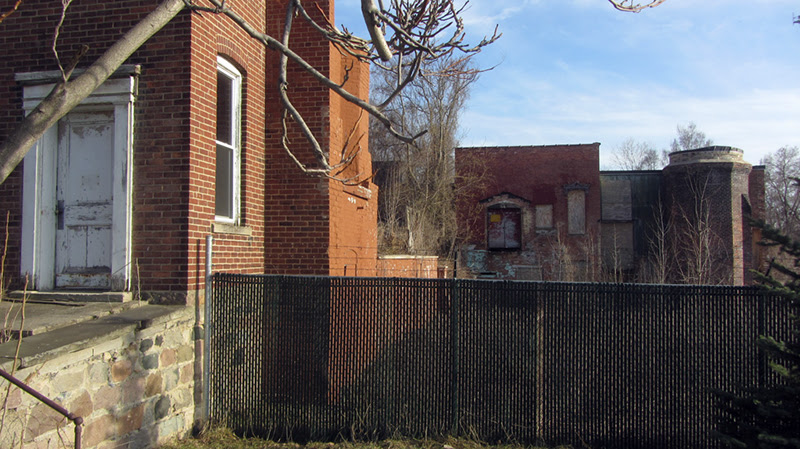 Clinton was founded by ex-New Yorkers at the intersection of the new Chicago Road and the River Raisin, in honor of DeWitt Clinton, the governor of their native state. By 1835, a daily stagecoach was running the route between Detroit and Chicago, and Clinton was a major stop along it.

Because of its location, Clinton became an important center of trade. By the late 1830s it had ten general stores, several blacksmiths, and a hardware. The first railroad was built with hickory rails in 1839, with the cargo trains being pulled by horses. The first passenger service did not reach Clinton until 1853. 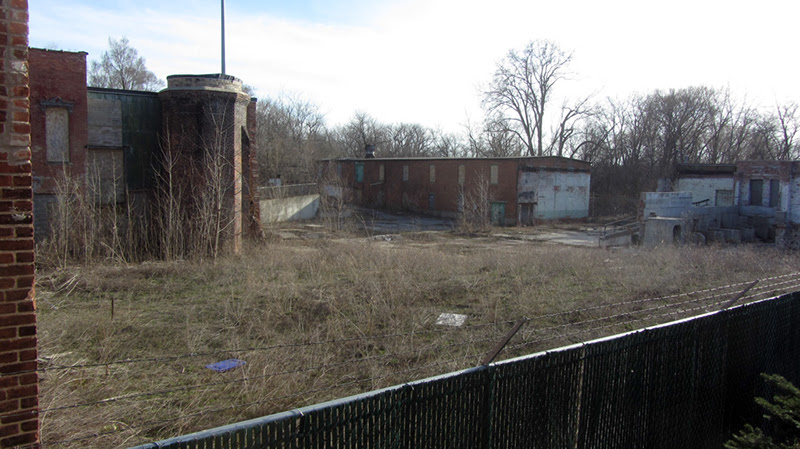 The oldest home in Clinton is at 135 E. Michigan, and was built in 1829. There are others in town from the 1830s, one of which was moved to Greenfield Village, and is now better known as the Eagle Tavern.

One bit of Clinton trivia that us Detroiters might be especially interested by is the fact that Wirt Rowland was born here in Clinton in 1878. He came to Detroit when he was 19 and eventually became one of the greatest architects in our history, designing the famous Penobscot and Guardian Buildings, as well as an array of other masterpieces. This mill burned down when Wirt would have been about eight years old. 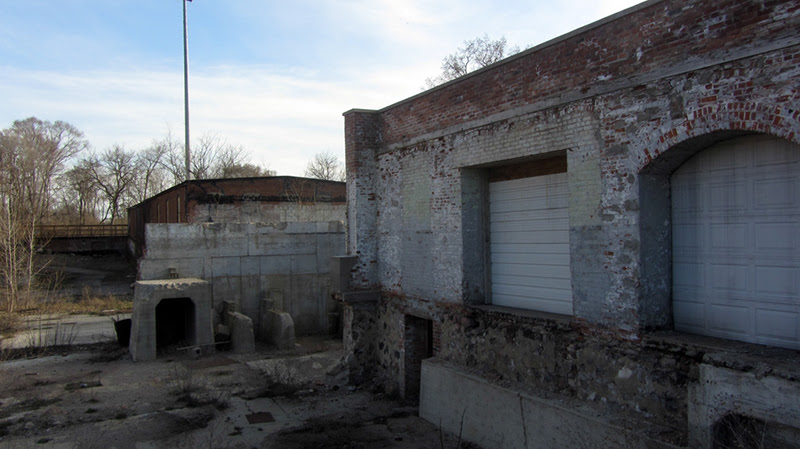 The Village of Clinton website's historical page states that the Clinton Woolen Mill was organized by 100 local stockholders in 1866, and originally consisted of a four-story brick structure, and served as the "principal employer" of village residents.

I wonder if Wirt's first job as a boy was working in this mill? At the time it mostly turned out fabric for men's clothing. It goes on to say that the entire wool production process was done here in this complex, from the scouring of the fleece to the finishing and dying of the cloth. 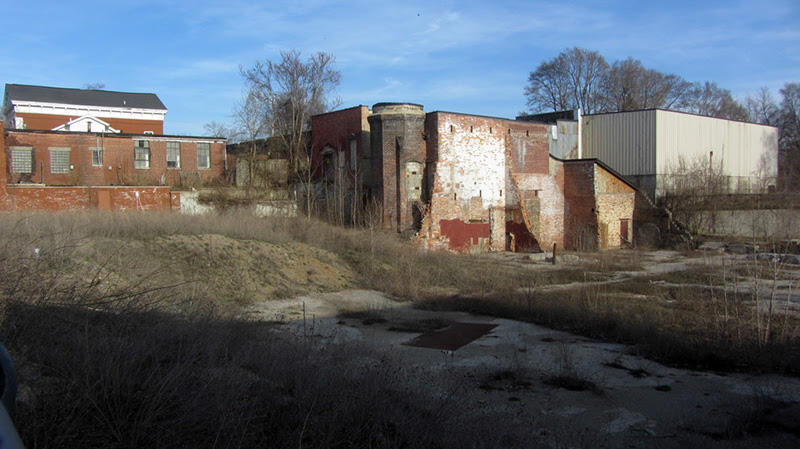 Another source explains that by the 1900s the mill was manufacturing cloth for uniforms as well. In 1925 the mill had 200 employees, while the village's total population was 2,000. In 1942, it was honored with the Army-Navy Award of Excellence in production. 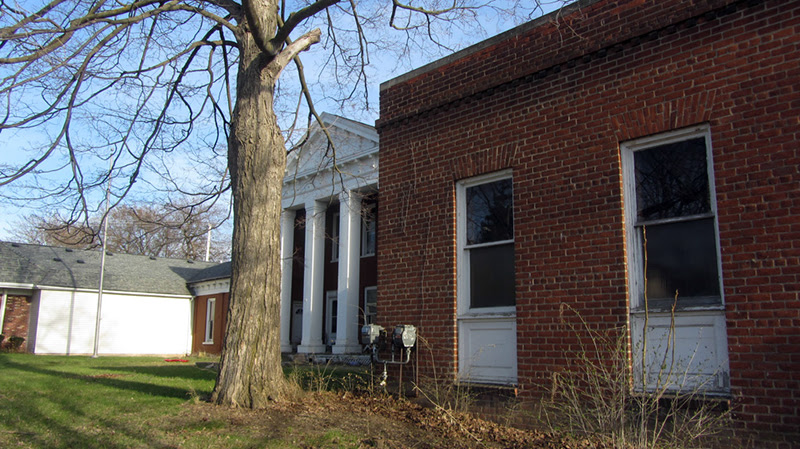 The reason given for the mill's closure in 1957 was that the Detroit car manufacturers--who were the biggest buyers of the mill’s textiles by that time--had begun make the switch to using synthetics for automotive upholstery fabric. With the mill's largest revenue stream lost it could no longer remain open, and faded into the proverbial history books.

The rise of using synthetic fabrics for clothing also played a part in sealing this mill's fate, as did the rise of factory wages in the face of competition from automobile manufacturing plants. 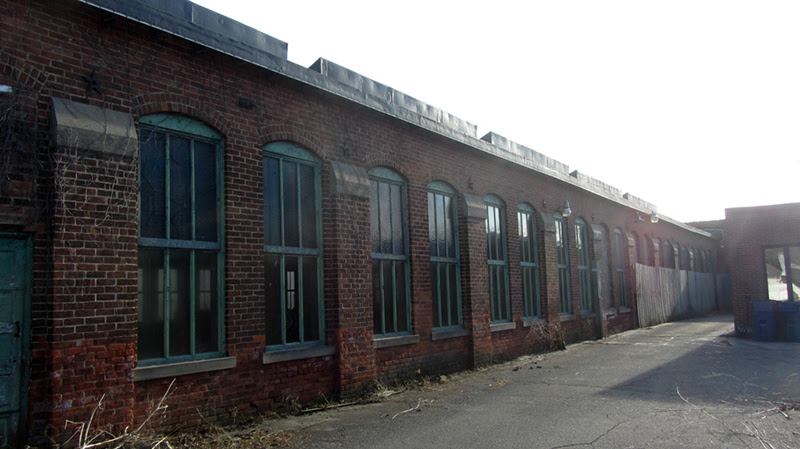 Not having much success with finding a front way into this place, we opted to dive into the woods and look for more circuitous means of ingress. Behind the mill stood this old elevator; the faded paint signs mark it as once belonging to the Atlas Milling Company...unfortunately there was no open way inside to climb it: 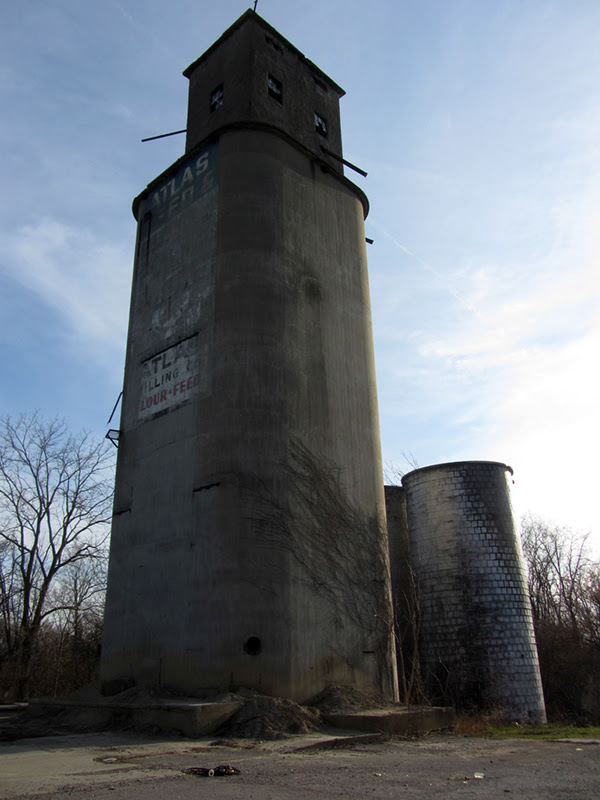 According to the Village of Clinton's website again, the Atlas Mill was once situated at 429 Franklin and is the second-oldest business in the state of Michigan, having got its start in 1836, dealing in flour and feed.


Early settlers built a mill on the Raisin River, soon after their arrival. It was called the Red Mill. The present mill can be documented back to 1836, when C. W. Pomeroy, D. & H. Owns contracted with Edwin Smith and Hiram Dodge to build a three story Greek Revival style mill. It was named Atlas Flour and their product was known throughout the state. In 1955, Charles Carlton and Max Steffens purchased the mill and flour milling was terminated and the business became feed milling. 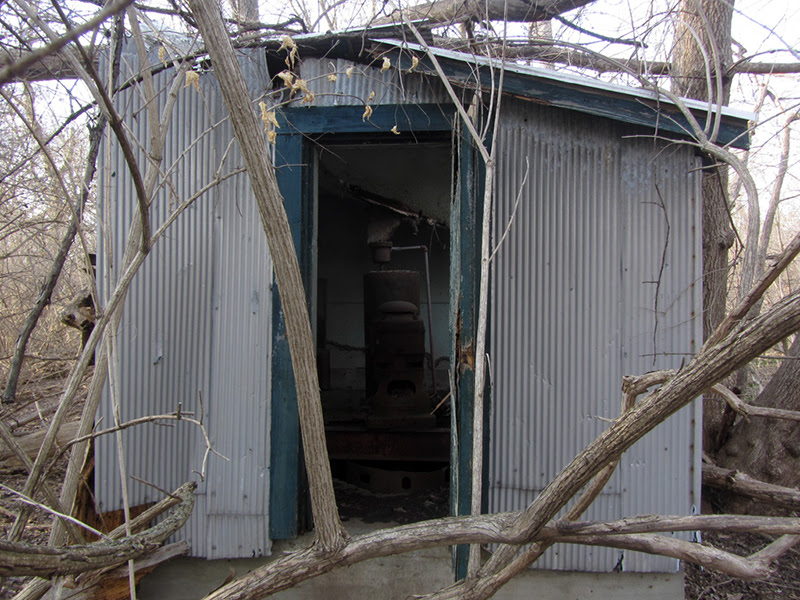 We dove through the brambles along the Raisin River to see if there was a way into any of the woolen mill's other outbuildings, and passed this old Mercury along the way: 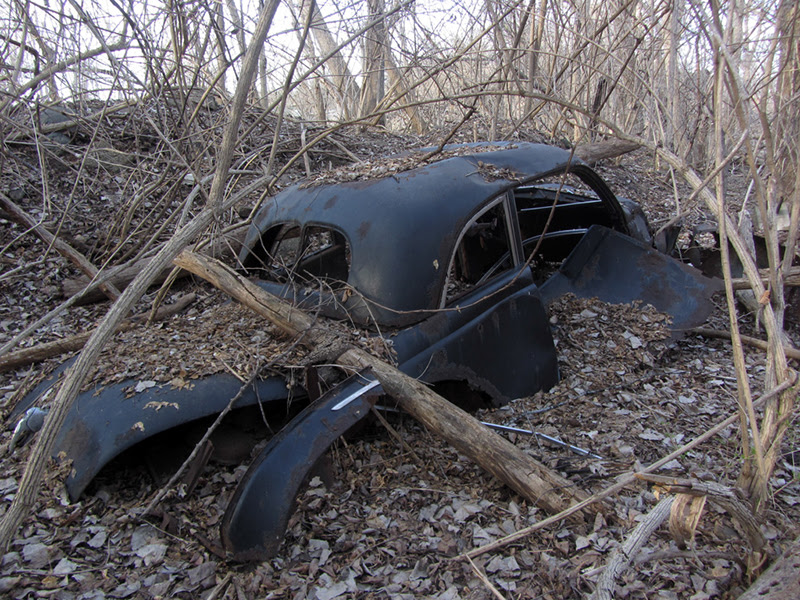 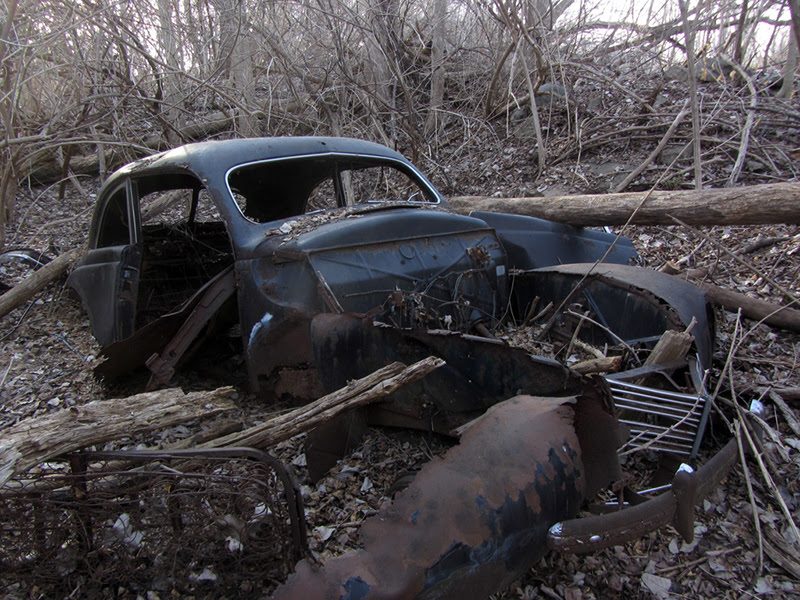 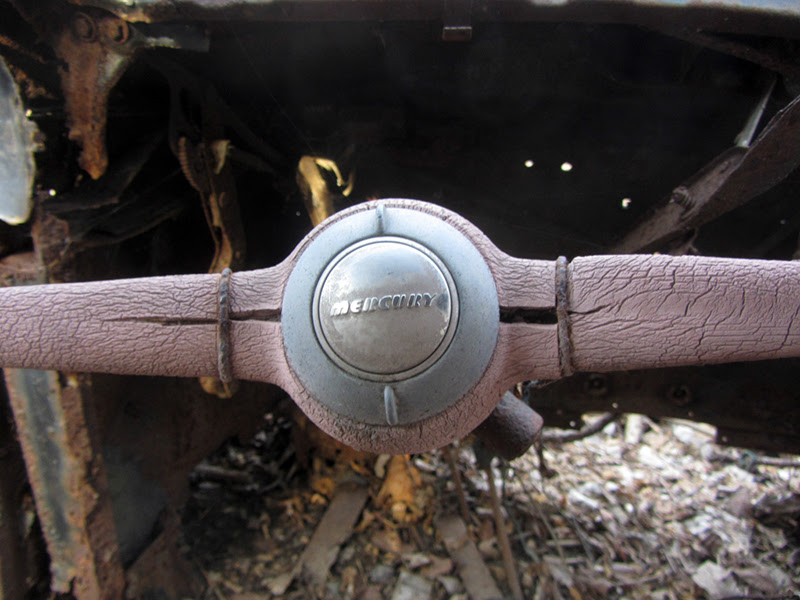 Soon we came upon a very old stone wall that was part of the Clinton Woolen Mill, and followed it. 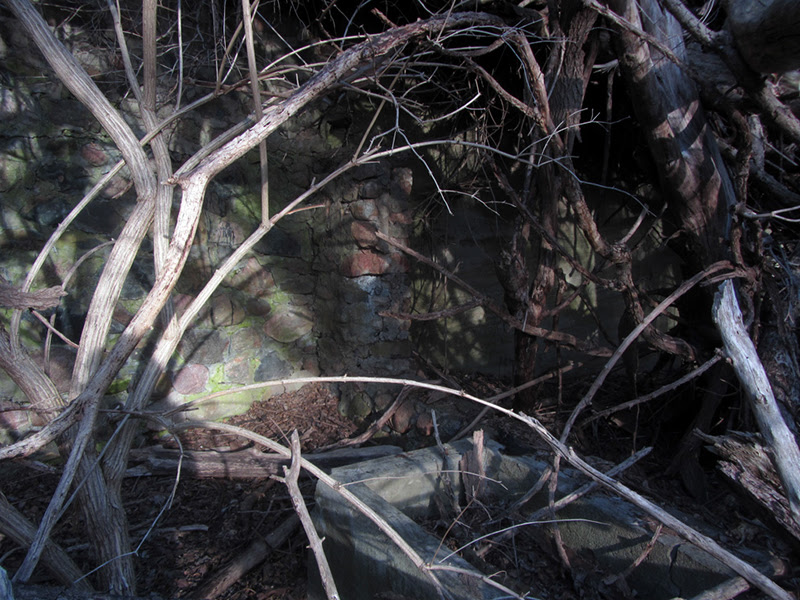 The overgrowth in this floodplain of the river was incredible. 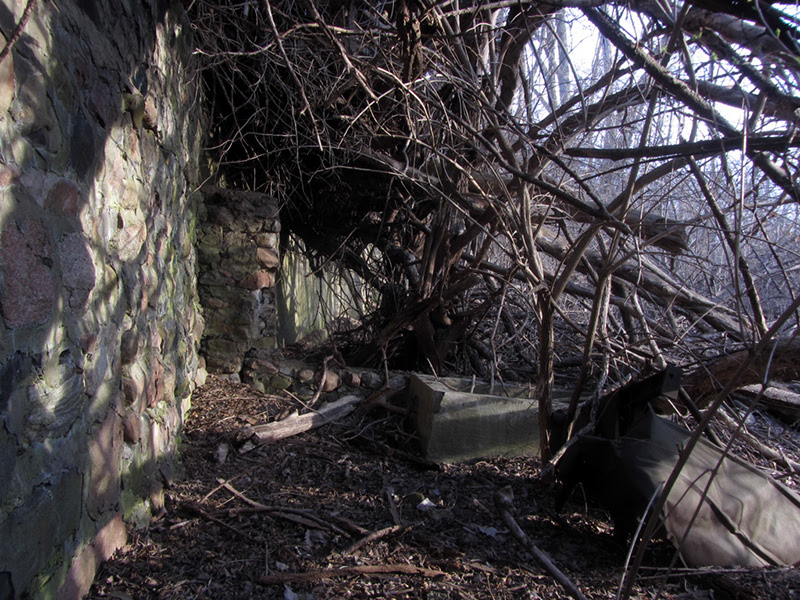 Was this old concrete tub once a wool-dying vat? 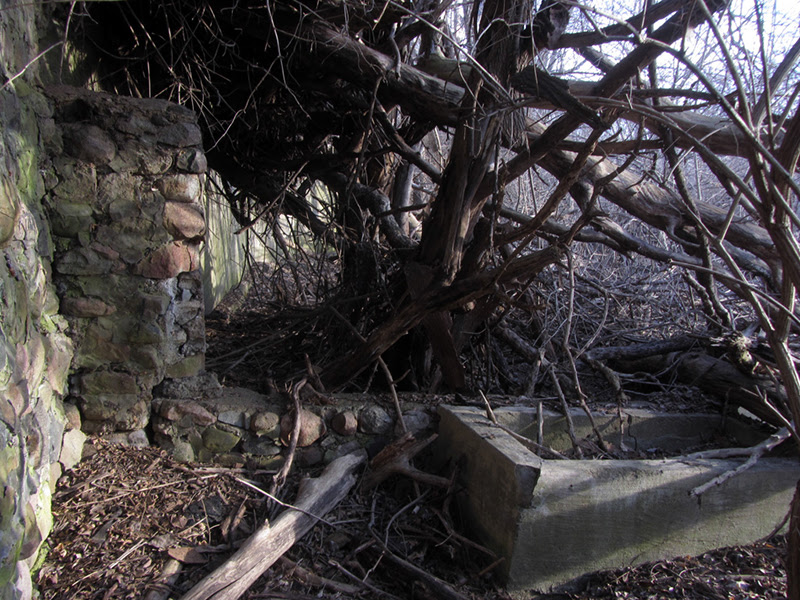 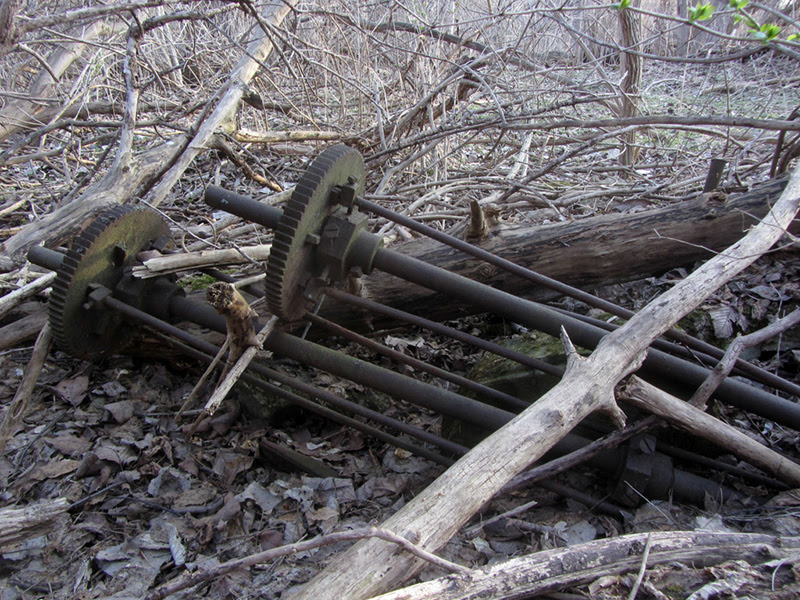 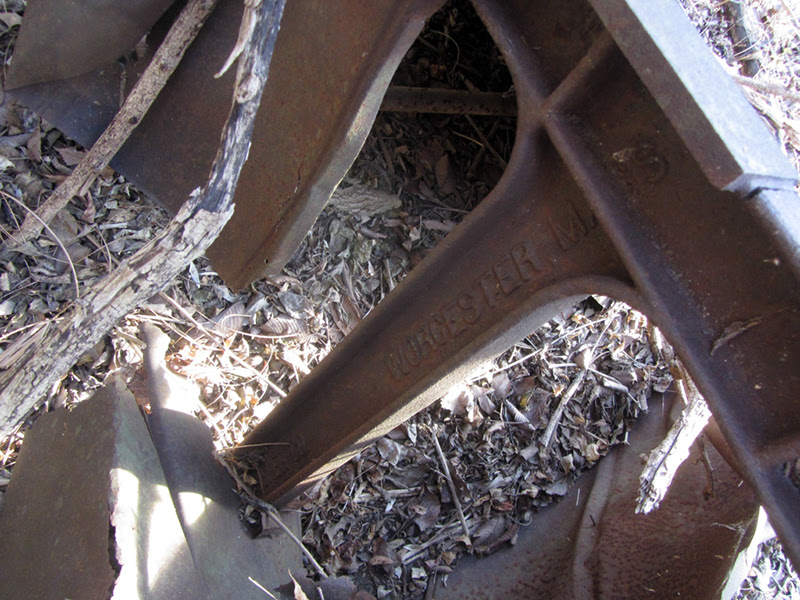 The wall eventually turned to concrete and continued for quite a ways further. 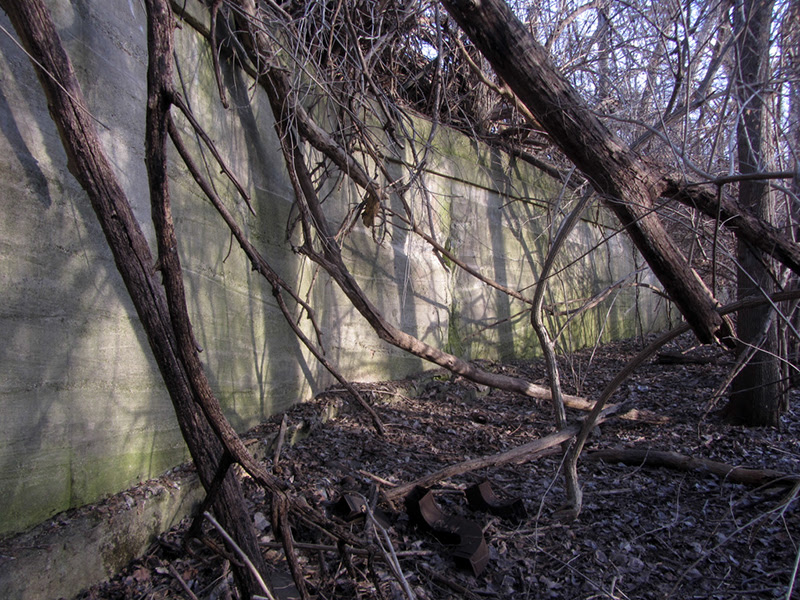 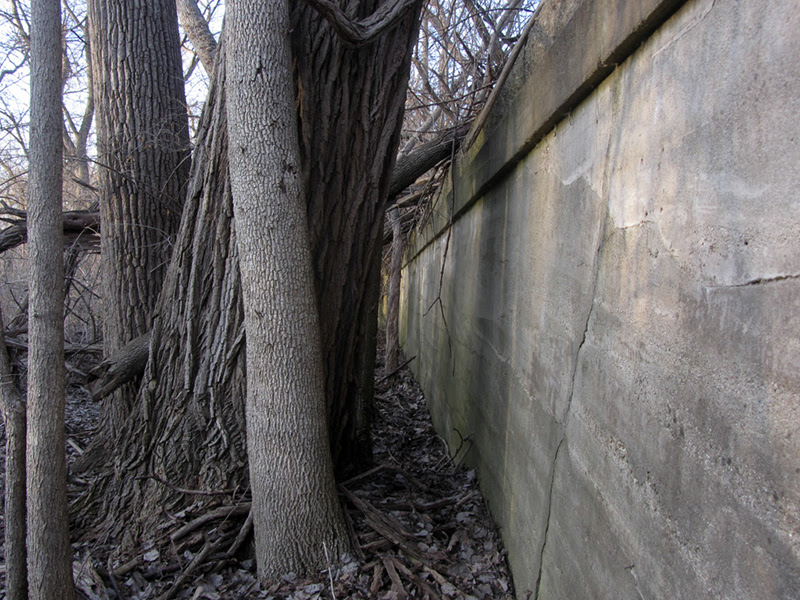 Finally I came across something that looked doable. It also looked by its fenestration to have been built in the 1860s or thereabouts: 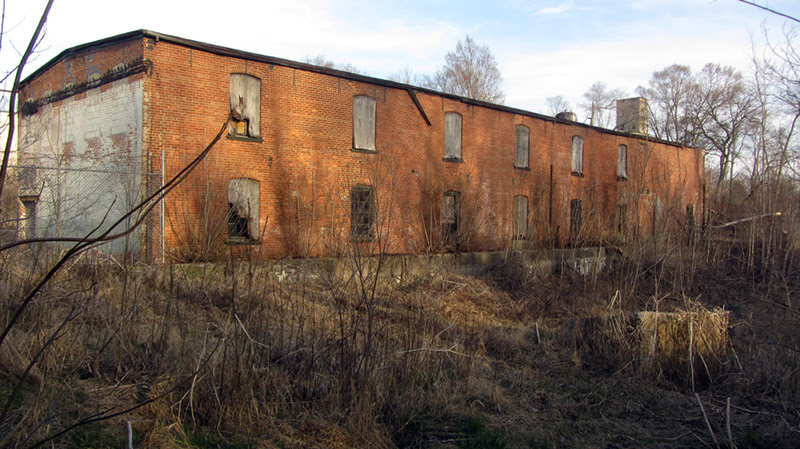 Once again I wonder if the 1886 reconstruction of this mill was done off of the original blueprints. 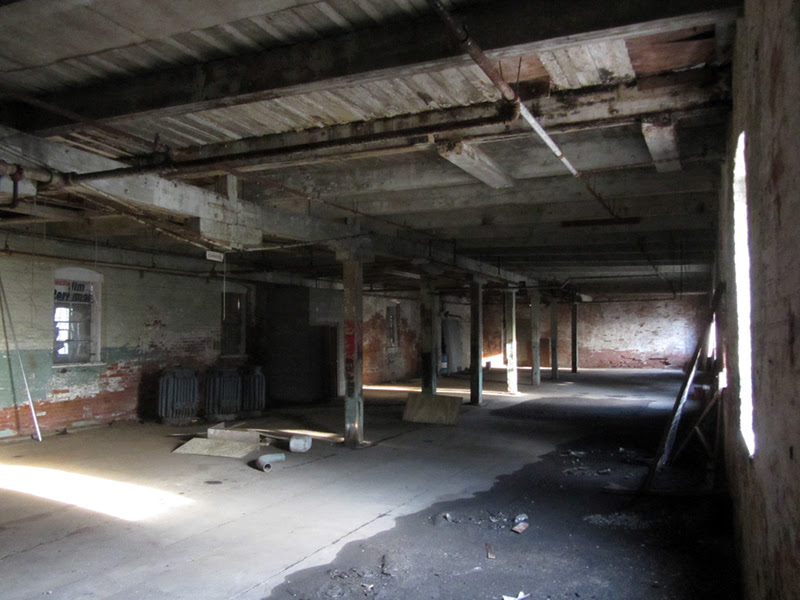 Not much to see here, just old milly goodness. 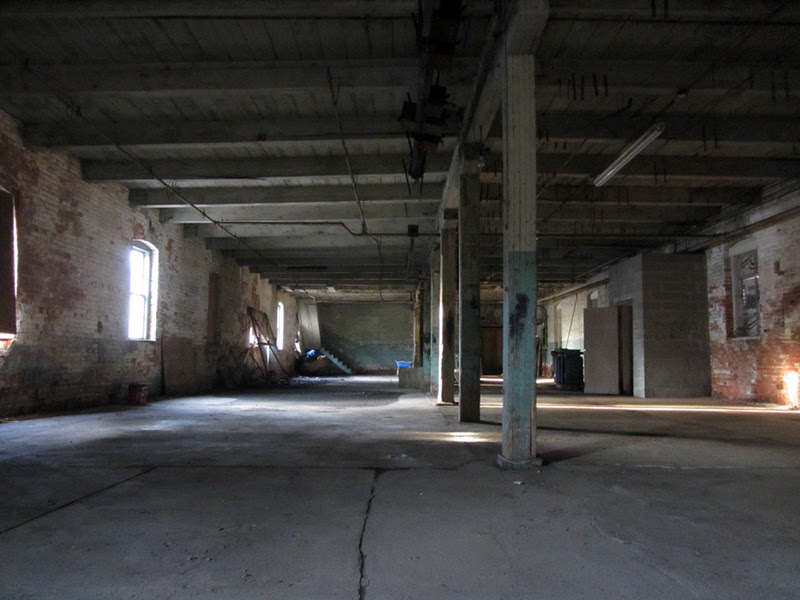 On my way back out toward the front of the property I came across a much newer building (c.1930s), which looked to be a pump house... 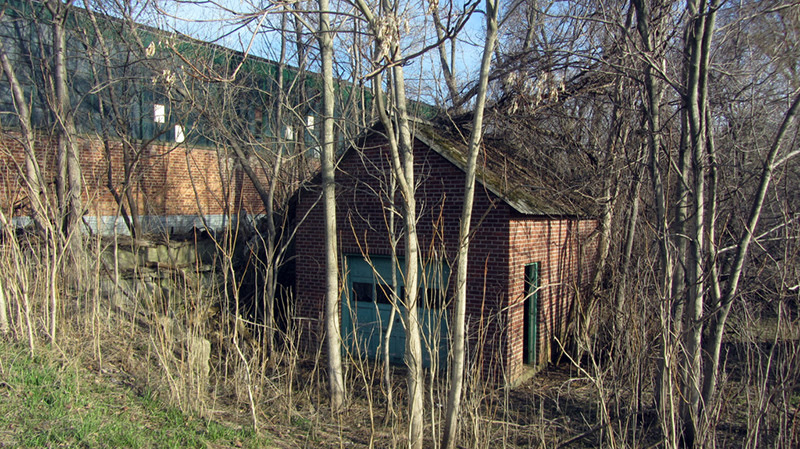 ...and contained this beast of a motor: 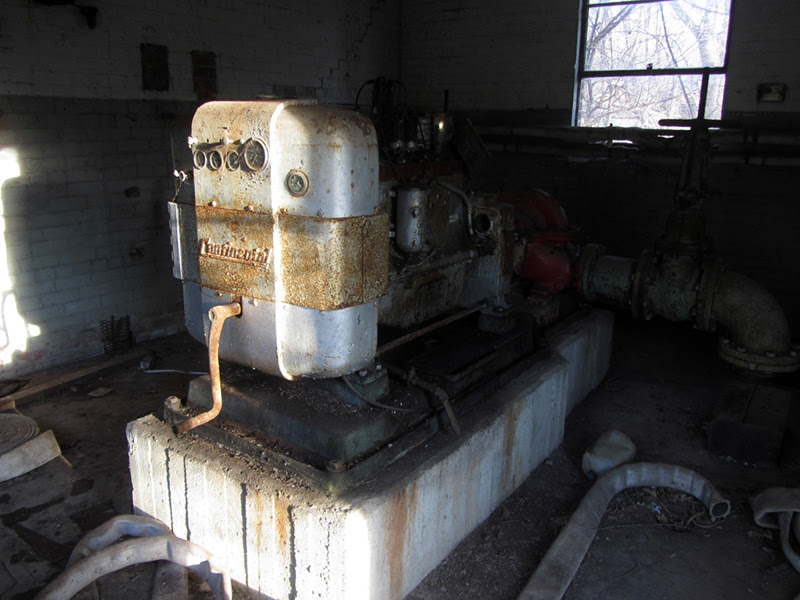 It was a Muskegon-built Continental Motors L-head six-cylinder industrial engine. I was obliged to let out a hearty Tim Allen-style grunt whilst ogling this badass crank-start piece of old Michigan iron. 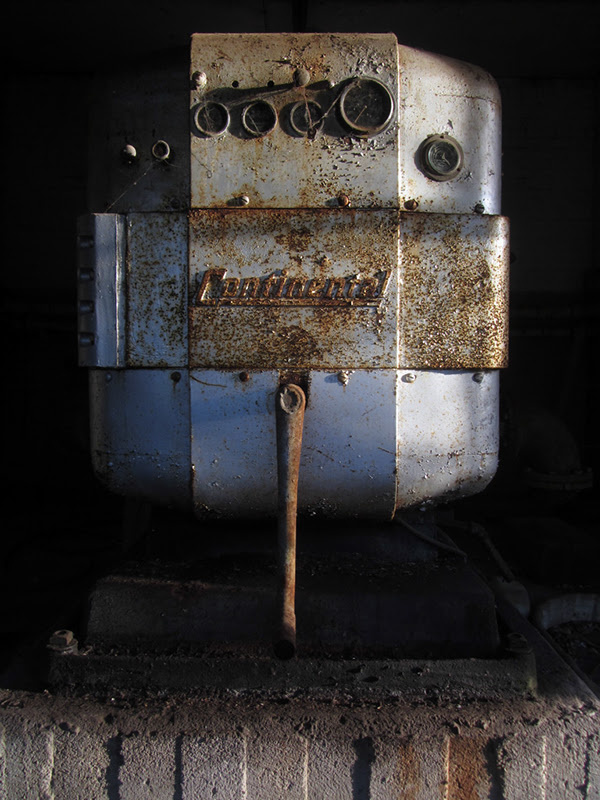 Looks like it controlled the water supply to the mill from the River Raisin, in some capacity. 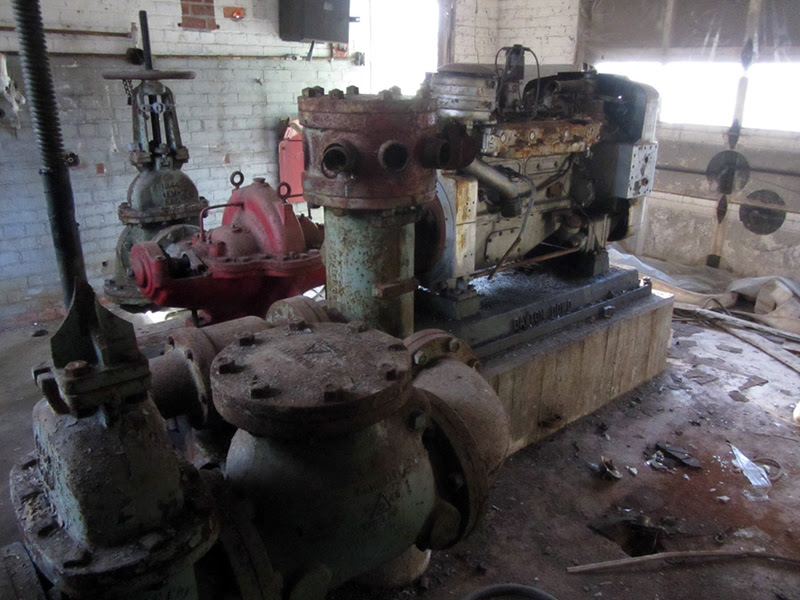 Okay...maybe I ogled it a little too much... 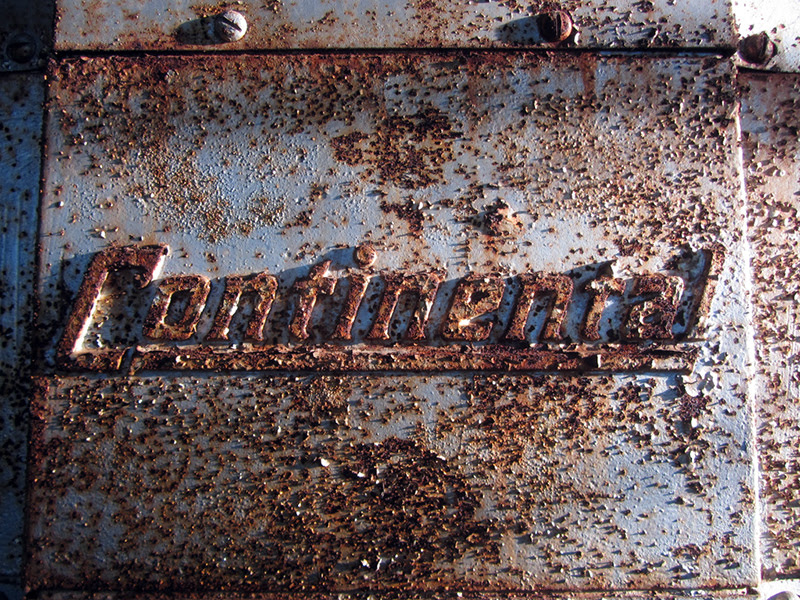 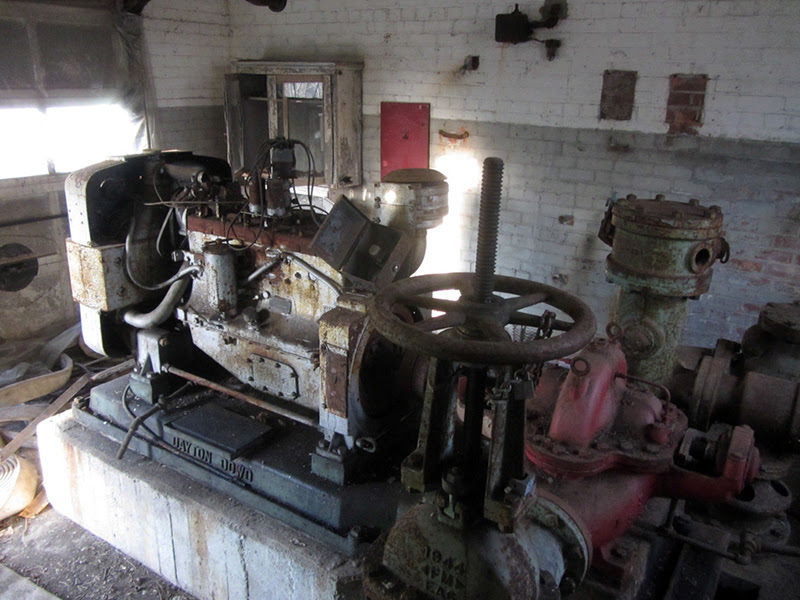 The tag, showing off the Continental "Powerful As The Nation" Red Seal of authenticity: 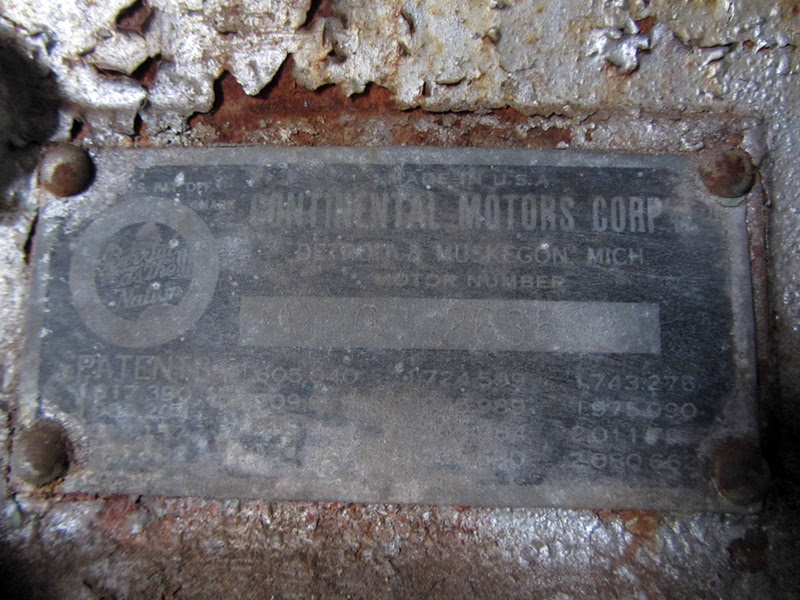 Unfortunately we did not make it into the nifty Greek-Revival offices as I had hoped, since just as we had found a viable way in some "concerned citizen" became aware of our suspicious presence, and we decided it best to call it a day.