Upon arriving back at St. Ignace I immediately hopped on US-2 west toward Manistique: 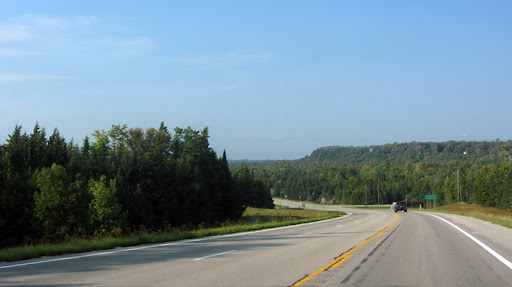 There were a couple minor things I wanted to snap pics of. First was a pair of kiln ruins visible from an old stretch of 2 itself, just east of Manistique, near Gulliver. The highway has since been rerouted for a smoother curve, and as a result I had never driven down this particular bend before. But here they were: 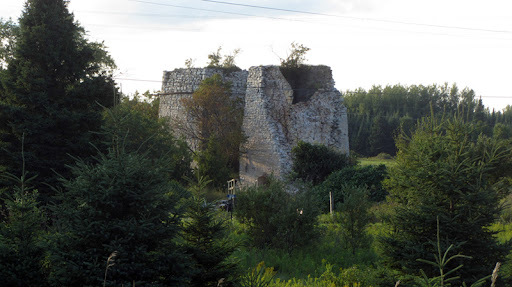 Clearly in someone’s backyard, this was the best view I was going to get. According to the HAER’s Upper Peninsula of Michigan Inventory of Historic Engineering and Industrial Sites, these ruins belonged to the White Marble Lime Co., started in 1889 by George Nicholson Jr. to produce quicklime using dolomite, and waste wood produced by the Manistique lumber industry. In 1925, this company was reorganized as the Manistique Lime & Stone Co., but ended production in 1929. The book says that beyond the kilns are the remains of ten stone piers, that probably once supported a ramp-way leading from a nearby hill to feed the kilns.

Next up was a quick recon of two things in the north end of Manistique itself. First was a very uncharacteristically modern (by Yoopee standards) prison named Camp Manistique that had been shut down, and whose main claim to fame was being seriously considered for the location of “Gitmo North”… 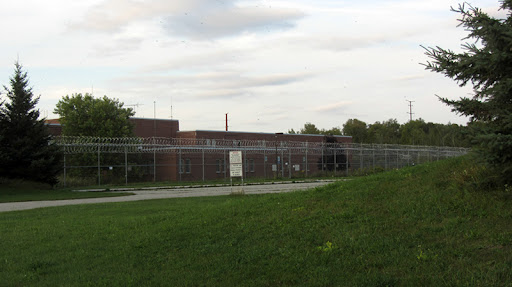 When the whole Guantanamo Bay prisoner fiasco was going down, this was one of the main candidates for becoming the next home of America’s Most Hated prisoners. Not surprisingly, the local community fought the idea tooth and nail.

I did not see any promise of getting in this thing, as the Michigan Dept. of Correction seems to have routinely kept their many closed facilities well sealed. Luckily my other target, the sparse ruins of the Manistique Iron Co. & Weston Furnace Co. was found just on the other side of the railroad tracks: 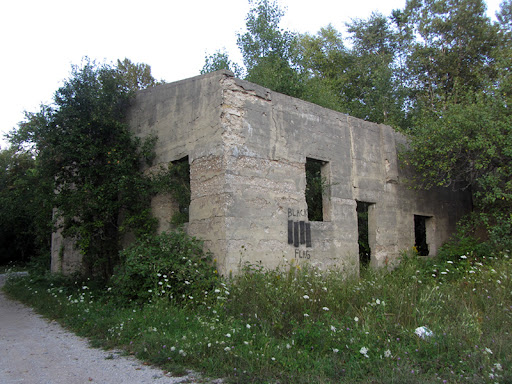 According to the book Manistique, by M. Vonciel LeDuc, Abijah Weston formed the Manistique Iron Co. in 1887 and the Weston Furnace Co. in 1890. If you recall the White Marble Lime Co. kiln ruin from the beginning of this post, that enterprise was started by a man named George Nicholson, who Abijah Weston brought to the area from Wisconsin to set up shop here. Weston also owned the lumber companies that supplied cedar for a shingle mill that Nicholson later built in 1896. 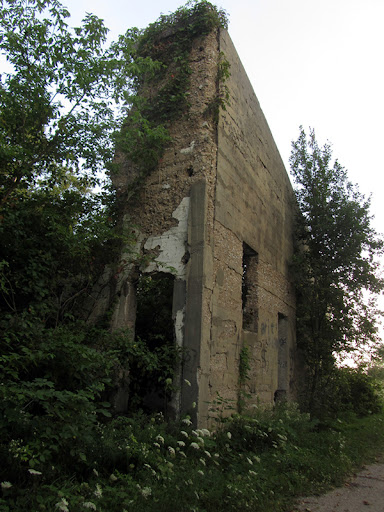 In 1915, a new company was formed by American, Canadian, and British interests called the Charcoal Iron Company of America. The Company remained in business until 1923 when the business declared bankruptcy. Unfortunately I don’t think any other Weston Furnace Co. buildings still exist besides this one, and the mosquitoes here were attacking with such extreme prejudice that I had to retreat without looking any closer.

One of the unique features of this town is the landmark watertower, and what’s known as the “Siphon Bridge”… 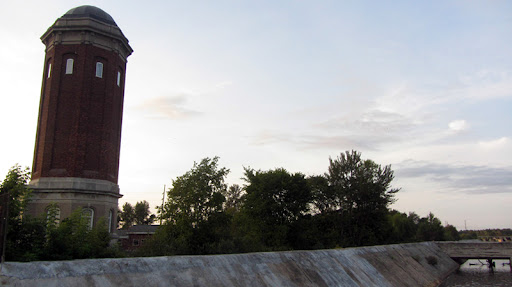 In 1916 the Manistique Paper Co. Mill was built near here, and rather than raise the level of the river for their needs they decided to build a dam, and a flume paralleling the river. The dam controls the water level in the flume by regulating the river’s flow into it. At least according to the HAER.

My plans included being in the heart of Copper Country by tomorrow morning for breakfast, meaning I had to make tracks. I hoped to get to Munising or Marquette before stopping for the night.

I rose extremely early and hit the road immediately. I was in Baraga rounding the fog-engulfed southern bend of Keweenaw Bay at precisely 8am: 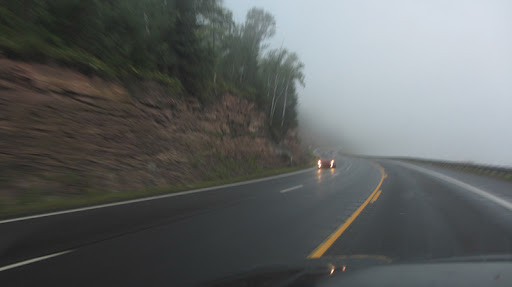 For a very sizeable chunk of this summer trip, we experienced extremely autumnal weather conditions, and this was a good example. It seemed like October for a good portion of our stay in the Keweenaw, the sky fitfully changing from glittering sun and beauty to misty fog-drenched drabness several times per hour.

Upon arriving at Rutabaga’s place in Centennial, it seemed like it might snow. They lived in one of the century-old miner’s houses so iconic to the Copper Country. She showed me their burgeoning blackberry bushes and the neighbors’ scenic junkyard nextdoor: 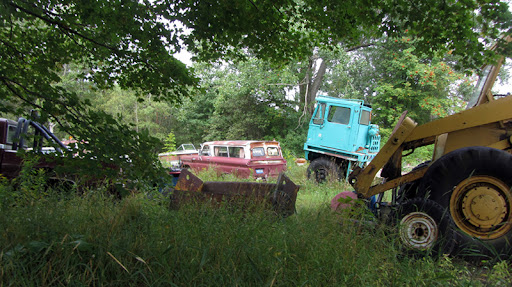 We took a jaunt down the street to check out the remnants of the Centennial Mine #3.

The old, slumping wooden shafthouse of the #3 had been an icon of the Copper Country’s golden era for generations, the last of its kind, but sadly the owner had torn it down very recently, and I would never get the chance to see it. Nonetheless we felt it was mandatory to go there anyway. Both CopperCountryExplorer, and Substreet covered this location before the old #3 was torn down. 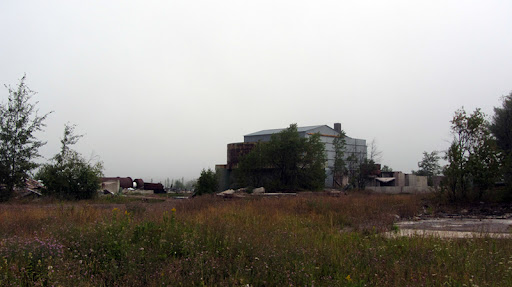 Trespassing is treated very differently in northern Michigan than it is in the urban areas, especially Detroit. Up here, it’s more like out West, where it is landowners’ prerogative to show up with a rifle and settle things the old fashioned way, but usually Yoopers are supremely easy-going if you don’t go out of your way to disrespect their property. 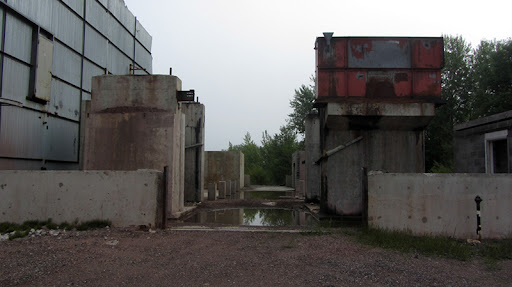 The owner of this site however, from what I had been hearing, was ultra-mega pissed lately. I guess he had had lots of problems with scrappers, and rumor was going around that he was getting ready to start shooting at any trespassers.

Foundation of the rockhouse: 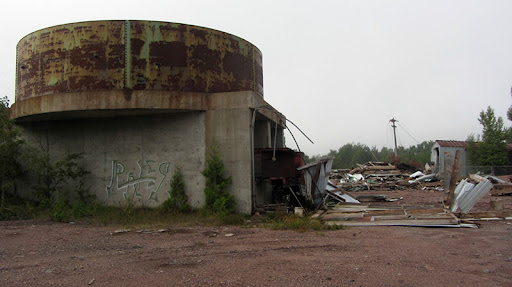 So even though I conveyed these warnings to Rutabaga, she still felt as though no extra precautions needed to be taken, and originally suggested we ride our bikes down there. We took her Jeep instead, because we were going to grab breakfast in Laurium immediately afterward. 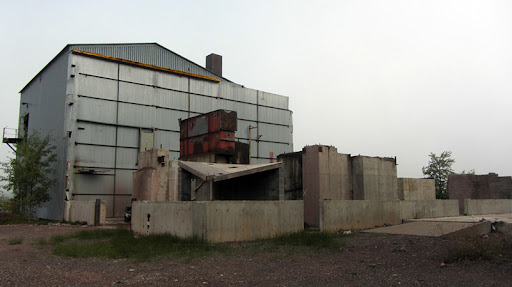 She had no qualms with driving right up in the place for a look-see, saying that she has casually rode her bike through here plenty of times. There were no fences or barriers to my surprise; it was basically right on the side of the road. Still, we stayed in the car and snapped only a few photos before going to get grub at the excellent Nina’s diner in Laurium.

According to the HAER’s c.1978 Upper Peninsula of Michigan Inventory of Historic Engineering and Industrial Sites, two mine hoists remained at the site of the Centennial #3 shaft. One was a steam-driven Lidgerwald Hoist dating to 1890, which is when the Centennial Mine was incorporated, and the other is a W.A. Box steam hoist dating to 1900, and originally served in a Colorado mine before being shipped to the nearby Tamarack #5 shaft, and finally to its present location. It was modified to run off a General Electric 500hp motor.

These particular items laying here were actually modern ball mills, and to the left is the boarded-up collar of the #3 shaft itself: 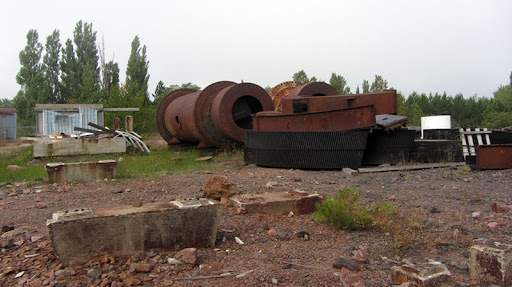 The Centennial Mining Co. was organized in 1876 (the centennial year of American Independence) and eventually expanded to a total of seven shafts. By the time Calumet & Hecla took over the Centennial Mines in 1923, they had yielded 37 million lbs. of refined copper. I wrote of the Centennial Mine's #2 and #6 shafts, as well as their stamp mill in the following older posts:
The Abandoned Mine Down the Street
The End of an Era
Star of Arcady

Lawrence Molloy’s Guide to Michigan’s Historic Keweenaw Copper District states that this #3 location was delved in the 1950s as a small exploratory shaft, sometimes nicknamed the “Peanut Shaft,” and produced no profitable copper. A commenter on pasty.com who presumably worked the mine in the old days said that they used to call it “Little Korea” because it was so cold down there, undoubtedly referring to the conditions that U.S. troops endured while fighting the contemporary Korean War. I now wonder if it was one of the Centennial #3 miners whose former house I would be staying in this week with Rutabaga and her family.