As we were riding along through Michigan's "Thumb" after leaving Tyre Elevator, in a patch of woods I managed to pick out the form of this incredible old farmhouse through the trees: 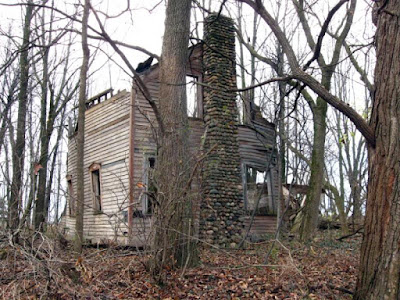 It was situated almost exactly on the Sanilac / Huron County line. 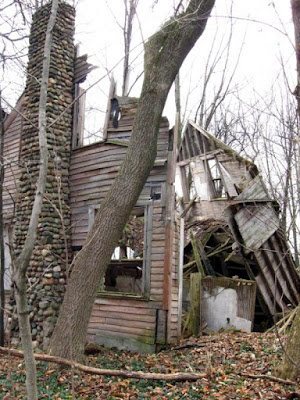 Though gorgeously original looking, it seemed to be in the process of being sucked into the bowels of Hell in slow-motion. 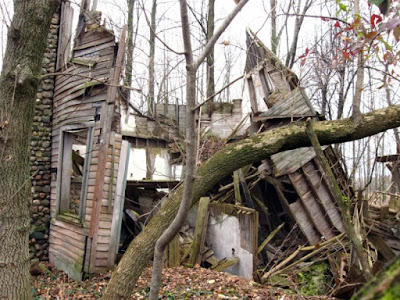 Huron County was organized in 1859. It embraces the entire tip of Michigan's Thumb, and was set off from parts of older surrounding counties. The seat of Huron County is the famously named town of Bad Axe. 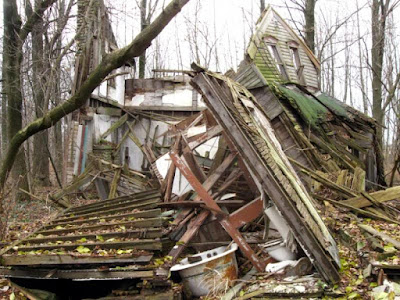 The Hurons fled to Michigan and eventually settled here. In their own language they refer to themselves as the Wyandot. 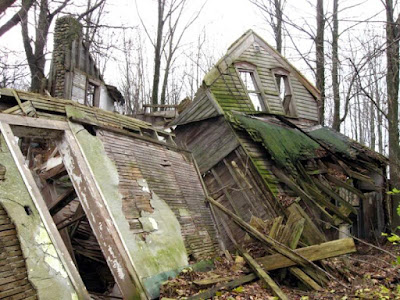 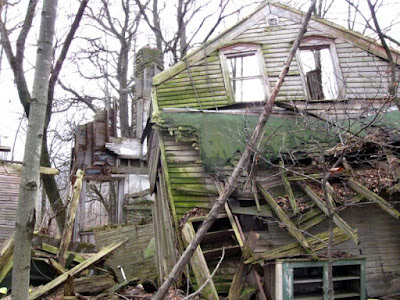 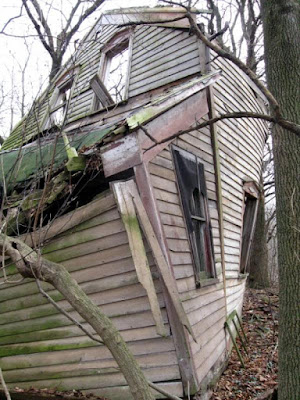 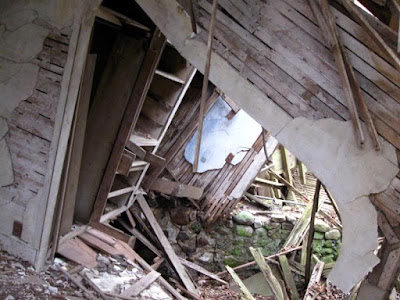 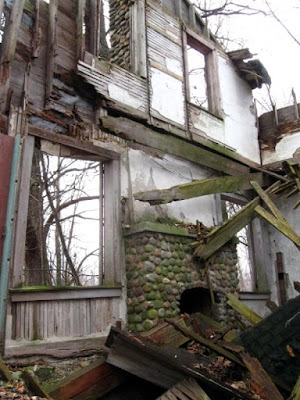 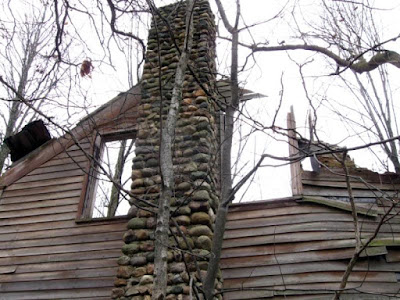 Another place of interest in Huron County for me was the ghost town of Port Crescent. Today its location is inside of a state park, and one of the only things that remains is this old trestle, which now just leads into some woods:

According to Larry Wakefield's Ghost Towns of Michigan, Volume 3, this town was originally named Pinnepog, after the river that it sat on. It was one of the first settlements in Huron County, having been founded in 1844 when the trader Walter Hume built a log cabin here, followed by a trading post and an inn. Hume was a Canadian "Free-Thinker" and was nearly shot by Canadian officials when he crossed the St. Clair River into America, according to the Michigan County Atlas, by David M. Brown (Hume's partner Wesley Armstrong lost an arm in the encounter, and later became sheriff of Huron County).

About a year later, another town was founded a few miles away on the same river, which also decided to call itself Pinnepog. In the early 1860s when both villages were ready to file for post offices, the Postal Service demanded that one of the towns change their name. The second Pinnepog was finally coerced into changing their name to "Pinnebog." The original Pinnepog still didn't like it, so they changed their name to Port Crescent, after the shape of their harbor on Lake Huron. Port Crescent prospered while Pinnebog never amounted to much.

Port Crescent had two sawmills, two dams, a gristmill, a cooperage, fisheries, and a brine well, according to Wakefield. Because of a shift in winds, it was spared destruction in the Thumb Fire of 1881. Some of Michigan's proudest lumber was milled here at Port Crescent, including one pine plank that was six feet wide. It was displayed at the 1876 Centennial Exposition in Philadelphia. The pure white sands here were also once mined for glass making.

Unfortunately Port Crescent's days began to set with the turn of the 20th century, and by 1936 it was a complete ghost town. It was turned into a state park in 1960, which may have involved demolishing all of the buildings. Pinnebog however still exists today.

I made a cursory investigation of the surrounding forested dunes, and found no evidence of past civilizations:

Near a parking lot I did see this stub of a chimney ruin. It dated to 1872, and was part of the Pack Woods Sawmill:

Continuing along our way north to the tip of the Thumb, we arrived at the Port Austin Air Force Station. It was decommissioned in 1988, and I had heard it was potentially partially abandoned, so I figured it was worth a look: 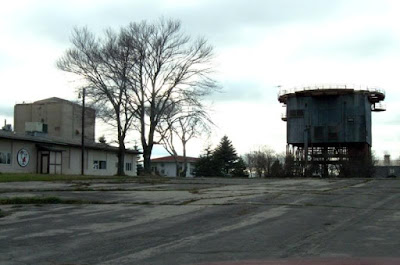 As you can see by the Little Caesar's logo on the side of the building to the left, the repurposing of this facility was already underway. One of the radar domes used to sit on that cylindrical contraption to the right. We didn't see any opportunities for snooping, so we did a quick drive-through and left.

According to a declassified Air Force document, Port Austin AFS was put in commission in 1951, as a manual Aircraft Control and Warning Squadron of the central NORAD Region until 1959. The unit assigned to this station became known as the 754th Radar Squadron, whose job it was to guide intercepting aircraft to the location of intruding aircraft within its scope range. By 1960 it was converted to a long range radar station under the 34th Air Division headquartered at Battle Creek. 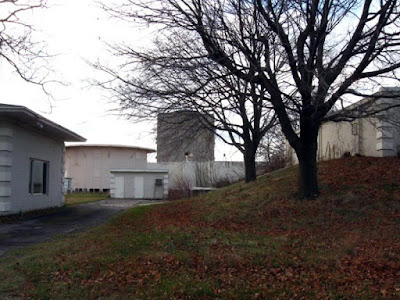 After 1965 it dove further into the alphabet soup bowl, and became part of the BIC, or Backup Intercept Control, a "computerized system of air defense" whereby it received radar and radio inputs from other LRRs, and "exercised operation control over assigned Fighter Intercept Squadrons within this region." Sounds high tech.

In 1968 this system was upgraded, which required the construction of a new building to house the newer, bigger super-computer that was needed to run this "larger computerized system of air defense," as well as the necessary operations consoles and programmers needed to run it. Beep boop beep! 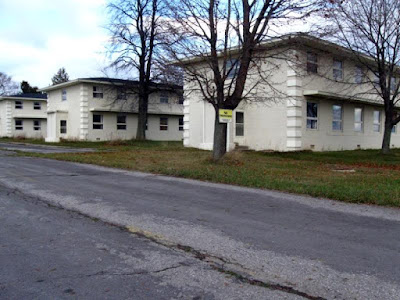 Port Austin residents used to call this installation "The Hill," according to one source. The 1971 article states that at that time the 754th Radar was one of five remaining units within the Aerospace Defense Command that was still using the search radar system. Since it was located in such a remote area it had to be self-sufficient in several respects; it had its own battery of generators, and its own sewage treatment plant. The station's population at that time was 280 airmen and their families, and their number made up 25% of Port Austin's permanent year-round population. 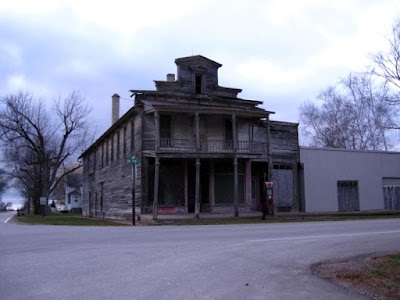 It started to get dark, so we began the long drive home. On the way we had just enough daylight left to see this old masterpiece in Kilmanagh. Judging by the name, I'd guess that it was settled by some Irishmen. 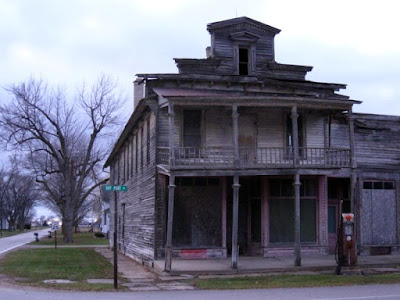 Google Books turns up a few references to it as a dairy farming town in the annual reports of the Michigan Dairy and Food Commission in the early 1900s. There were also several entries for "Kilmanagh Cheese Factory" in towns like Linkville, Pigeon, and Sebawaing. The book Michigan Place Names, by Walter Romig says that the town's original name was Thompson's Corners, after Francis Thompson who came here from Ireland in 1861 to homestead. He became the town's first postmaster in 1873, and according to Romig, the post office shut down in 1904. 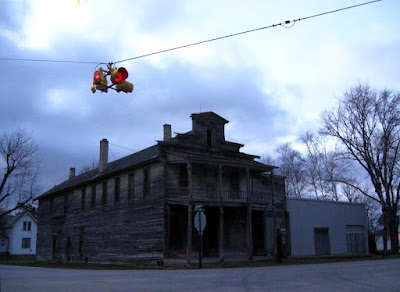 Thompson eventually renamed the town Kilmanagh after a place in County Kilkenny, Ireland, because I suppose the Shebeon Creek here reminded him of one in his native land that overflowed each spring.