Continued from part one.

Wandering the upper floors of an abandoned skyscraper in the still of night is an experience that, as I have no doubt pontificated upon at great length in the past, borders on the sublime and the surreal. In early March 2006, a friend wrote of the experience like this:

This is my city, unfurling in all directions, and I see something different every time I stand at another summit, far from the madness of the streets below, or each timeI wander cautiously through the dim light of an empty hallway in a deserted building.

There’s always something new in its sameness — light pouring in from changed angles, illuminating flecks and corners unseen before, or old treasures unburied by a night’s strong winds stirring the stale air.

It’s the other Detroit, away from the race obsession, the evaporation of public money and trust, the self-devouring criminal mayhem, the desperation of those trapped by poverty, the madness of the wandering hobos down below. Up there, it’s nothing but silence and remembrance and possibility.

It commands a certain reverence for what dire conditions had to transpire to lead to this state of affairs. With history's largest municipal bankruptcy now complete, it seems as if that spell has been broken at last. Reality has finally set in where surreality once pervaded, and a new consciousness is awakening as the sound of Nero's fiddle becomes slightly fainter.

The age of free and open skyscraper exploration in Detroit has set, and hopefully this Detroit "comeback" will succeed where all the others failed, and those strange nights looking out over the silent city will not return in our lifetimes. Don't get me wrong—for my part I enjoyed it to the fullest, but all things must end.

Check out this historic photo I just found in the Virtual Motor City Collection, that was taken from the exact same vantage point as my photograph:

After renovation had just begun in December 2007, Sloop and I decided to make one last run inside the Hotel Fort Shelby to see what it looked like with work-lights on and the basement pumped out.

We also found a mini-Xmas tree and placed it in the middle of the grand staircase:

I took some better pictures of the lobby details, just in case it was about to get gutted:

The orange hues and deep shadows made for an eerie effect.

One last look at the Crystal Ballroom:

Also, Sloop took some better photos of the telephone switchboard. For some inexplicable reason I was satisfied with my crappy flash photo from ten years ago.

Amazingly, it was never tagged up by the usual clowns.

I also realized that I had never taken adequate pictures of the exterior details like I usually do:

This is a wooden, glazed window, by the way...talk about old school:

Those definitely got replaced during the renovation. Unfortunately the "balconies" are mostly just for looks and there isn't enough room to hang out on them:

The Fort Shelby Hotel sits near what would have been Fort Lernoult, the second fort to have guarded Detroit, which was built by the British from 1778 to 1779 after having inherited the city from the French. The British naturally scoffed at the pitiful ruins of their Fort Pontchartrain and built a new one of their own.

It wasn't until after the American Revolution and the Jay Treaty of 1796 that the British left Detroit in the hands of the new American government, who eventually renamed it Fort Shelby (after the Governor of Kentucky, Isaac Shelby).

During the Great Fire of 1805, the fort was the only structure in Detroit to survive. During the War of 1812 it was surrendered to the British again, and the region remained in the thrall of His Royal Majesty for just over a year.

Fort Shelby was decommissioned in 1826 and slowly demolished by the City of Detroit over the next couple years to make way for the outward growth of the city. Detroit was without a military post until 1842 when Fort Wayne was built.

The site was excavated when buildings in the area of Fort Street and Shelby Street were built; part of the fort's foundations and palisades were found during the digging for the old post office, the People's State Bank, and the Detroit Bank and Trust Building in 1962, at which time archaeological recovery was done. Wayne State University has about 8,000 artifacts uncovered from the site digs. Both Fort Street and Shelby Street take their names from Fort Shelby.

This hotel does not take its name from the fact that it sits atop the site of old Fort Shelby however, nor is it located at the corner of Fort Street and Shelby Street. It is so-named because it was the second in an apparent series of Detroit hotels named after the three Detroit forts that have guarded the straits over the past three centuries: Fort Pontchartrain, Fort Shelby, and Fort Wayne all have hotels named after them.

As you can see here, the masonry on some parts of the building was in an advanced state of decay:

Nonetheless, this hotel was fully restored and is back in business (profitably!) today. The restless ghosts of this old hulk, and those of old Fort Lernoult have apparently been put at ease with the coming of new light and warmth to these cold dark windows.

...Though I can't imagine they are all too pleased with the carpet selection.

Nonetheless, this structure is the perfect exemplar of exactly why these places (such as the current sacrificial lamb, the Hotel Park Avenue) can be saved from pretty severe ruin instead of just continuing to demolish perfectly good, irreplaceable buildings, and replacing them with disposable, uninspiring modern crapola. 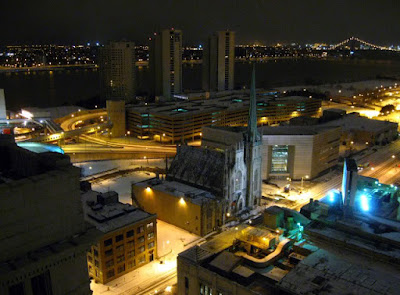 Not long after the Fort Shelby reopened some friends and I got a room there, and it was discovered that the roof was still accessible via one of those "swift, Fonzarellian karate-chops" I talked about in an earlier post... 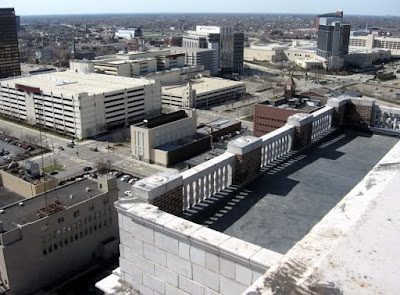 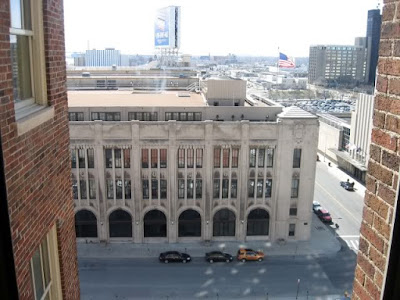 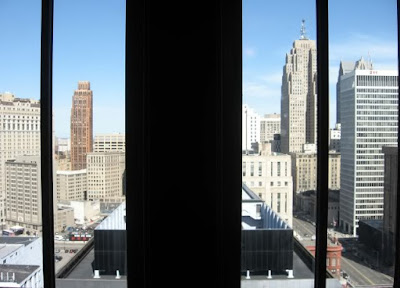 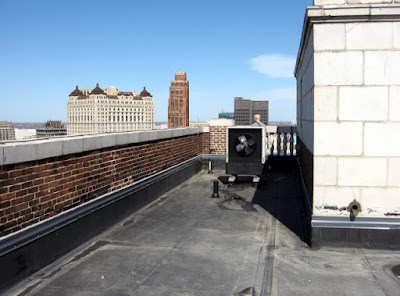 Change was definitely underway by this point; the Book-Cadillac was renovated, and the Rosa Parks Transit Center was under construction: 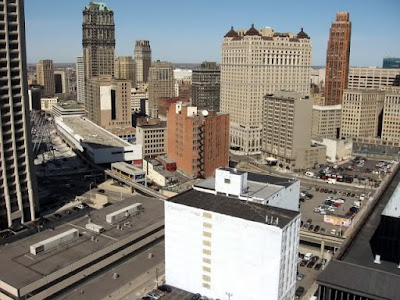 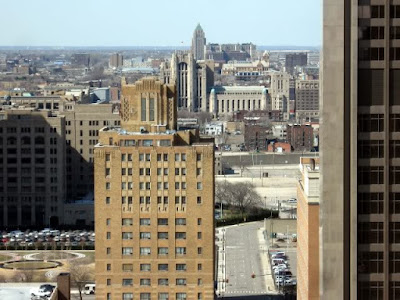 Corktown...maybe you've heard of it: 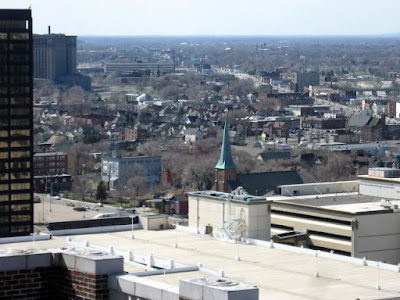 This beast is still vacant though: 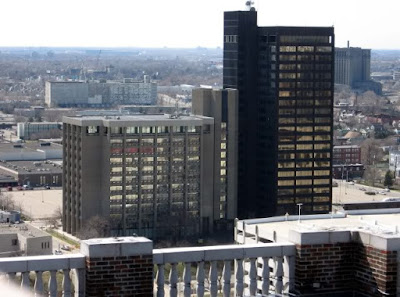 As was the Book Tower: 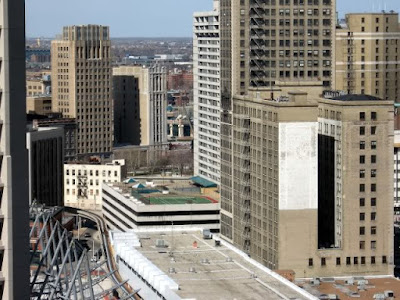 You may recall my little adventure climbing on top of this thing: 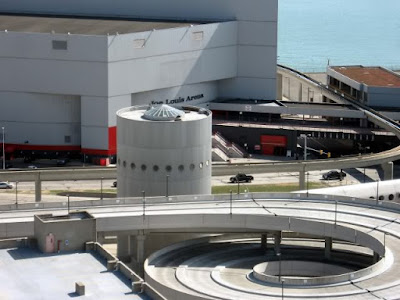 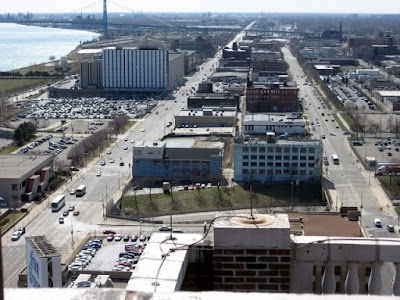 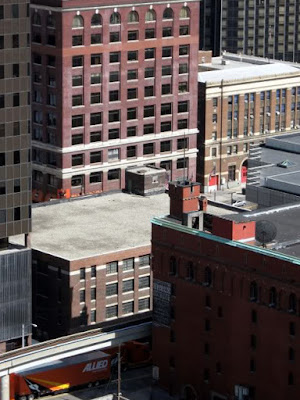 My man Sloop managed to take some pretty good shots of the lesser-seen south side of the building. Note the bay windows on this side of the tower:

The old ghost sign has about three different layers that I can see: