Greener on the Other Side of the Fence

For awhile I had family that lived in Kalamazoo, so sometimes I would take sidetrips to see stuff in southwestern Michigan. One of the sights that had a pretty big billing in the annals of Michigan urban legend was always the Felt Mansion, or "Junction Insane Asylum," which lay along the historic Red Arrow Highway on Lake Michigan, outside Saugatuck. It was kind of a hot and steamy summer's day, and some warm drizzle was moving in off the lake. 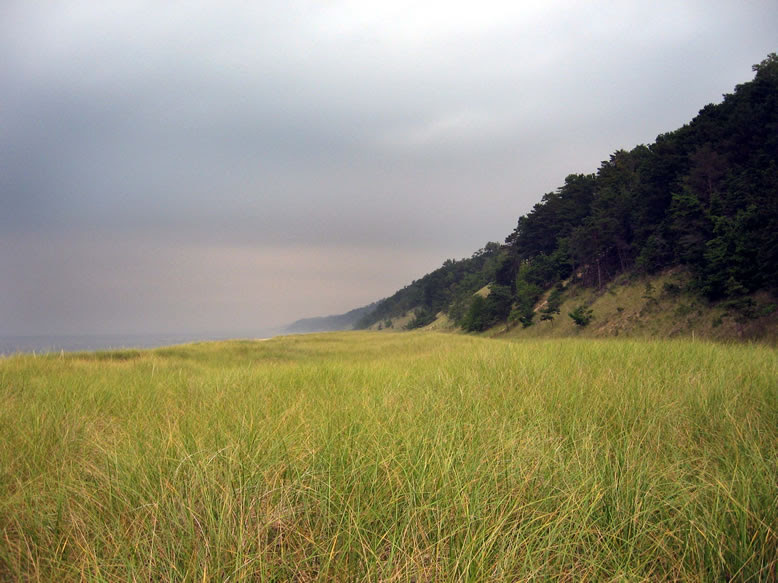 Dorr E. Felt was a Wisconsin machinist who moved to Chicago and invented the "Comptometer," the first office machine that could do complex calculations, in 1886. It was able to perform four math functions, dramatically increasing bookkeepers' efficiency and accuracy, and making Dorr Felt a millionaire.


Whereas every millionaire needs a mansion, and whereas it was tremendously chic for the Chicago elite to own retreats on the Michigan "Riviera," Felt bought several hundred acres of rolling Lake Michigan dune land in Allegan County (MAP). 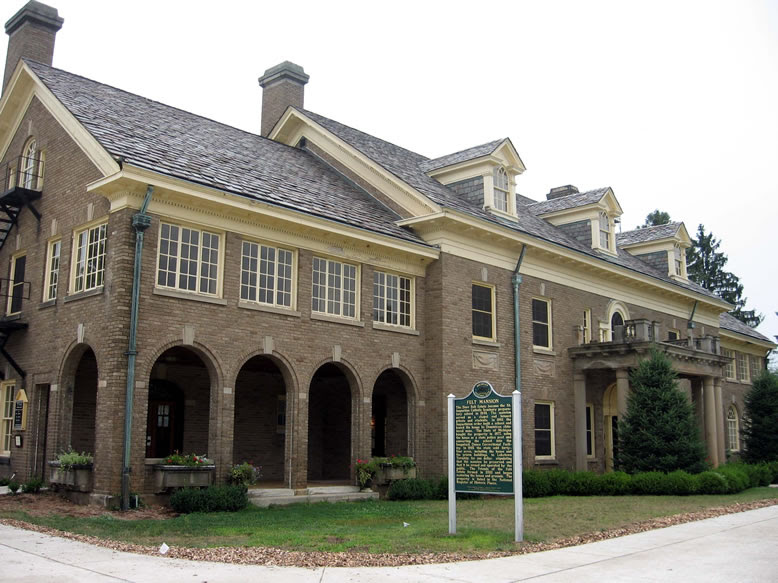 I've always found it funny that Chicagoans vacation in Michigan, because they have nowhere else in urban Illinois to experience the pristine lakeshore environment we have; Detroiters have been vacationing in Chicago for generations, because at least as long as I have been alive there has never been anywhere in Michigan that offers us that big-city downtown experience, since Detroit has for 40 years been "undesirable" to its suburbanites.

Anyway, Felt named his estate Shore Acres Farm, and completed construction of this 12,000 square-foot house in 1928. Both Felt and his wife died less than two years later, and the family eventually sold off the estate, which was bought at auction in 1949 by the St. Augustine Seminary of the Chicago Archdiocese, a catholic preparatory school for young men. 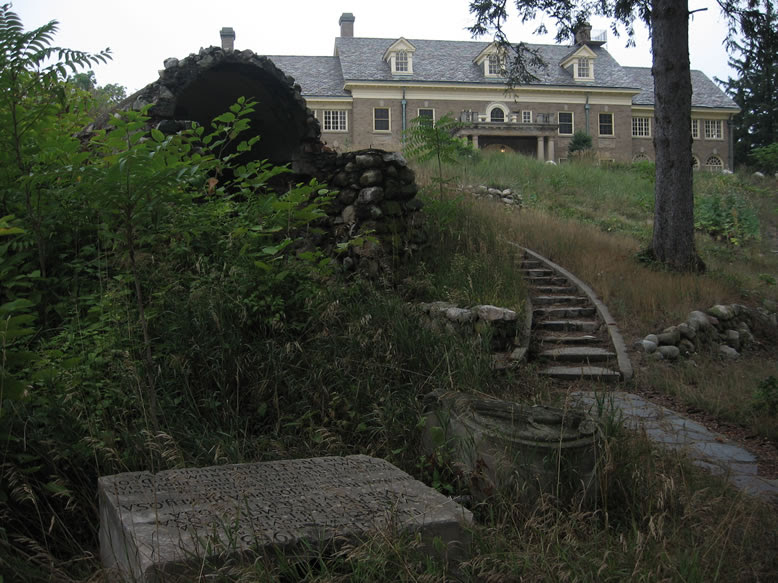 They converted the carriage house for classrooms, and used the mansion for housing, while building a more permanent school on a ridge west of the mansion. When that new seminary was completed, a group of cloistered nuns moved into the mansion in 1962. Declining enrollment in the 1970s forced St. Augustine Seminary to sell the property. 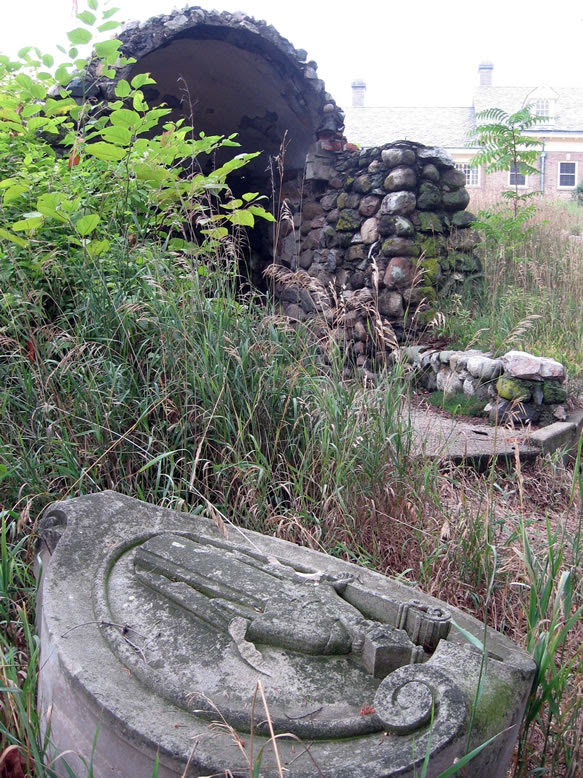 This is the ruins of the grotto, and a few pieces of the Augustinians' now-demolished seminary I presume. 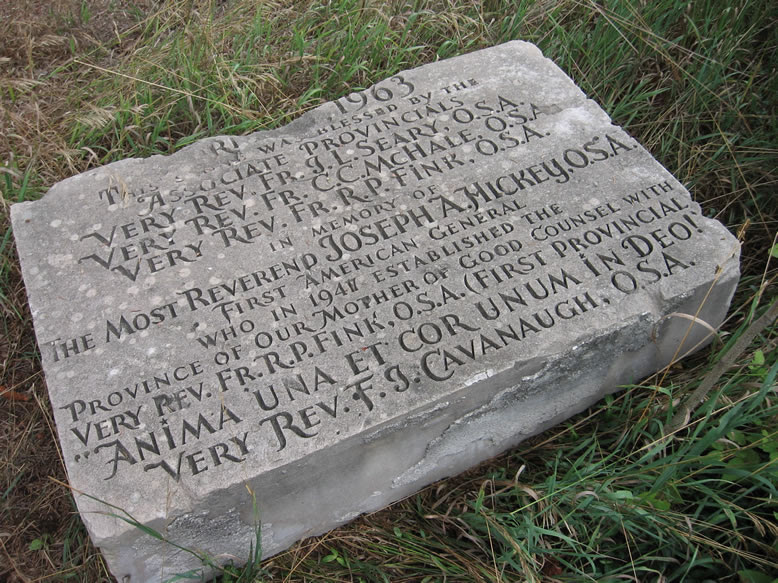 The State of Michigan bought the complex in 1977 and turned it into the Dunes Correctional Facility, a medium-security prison. The mansion was shared by the prison offices, State Police, and a drug enforcement agency, WEMET. It was also surrounded by Saugatuck Dunes State Park by that time. 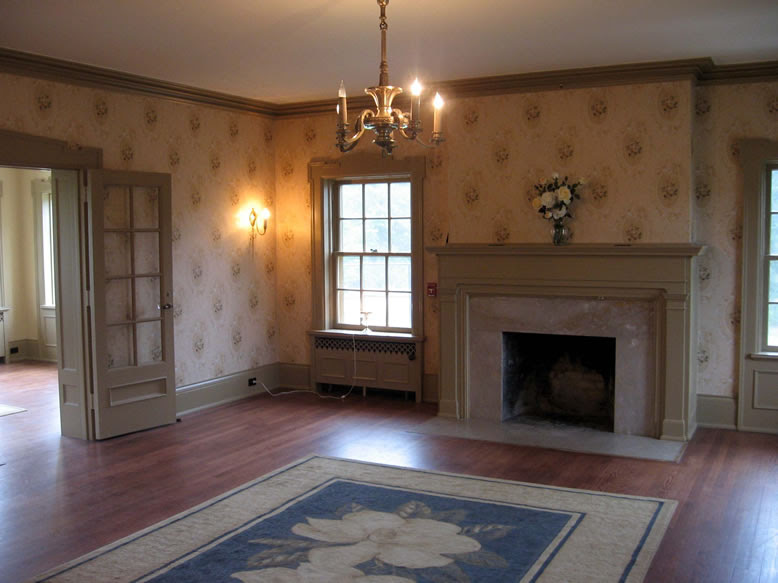 The state closed the prison by 1988 (or 1991, depending on your source), and eventually sold it to Laketown Towship for $1, under the stipulation it be kept as a public landmark, and the fragile dune environment kept preserved. Which is of course not to imply that the state took very good care of it. In the meantime the mansion had fallen into decay and earned a reputation as something of a local Addams Family house, a creepy place that all the kids went to to chase ghosts, and to get scared by the "Melon Heads." 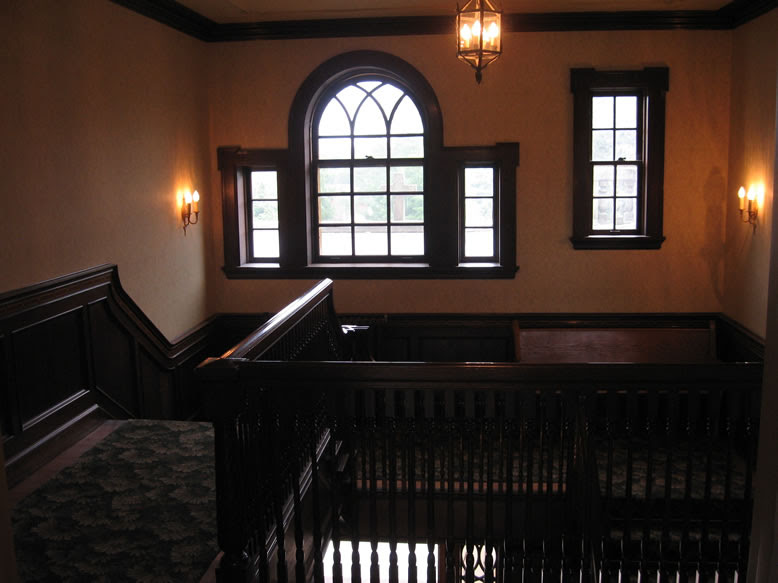 The urban legends maintained that after the Felts died, this place became the "Junction Insane Asylum," and that as the story goes, these woods were inhabited by the fearsome mutant beings known as Melon Heads, who were hideously deformed humans, with giant heads. Not only that, but the ghost of Agnes Felt supposedly haunts the mansion, especially the third-floor ballroom: 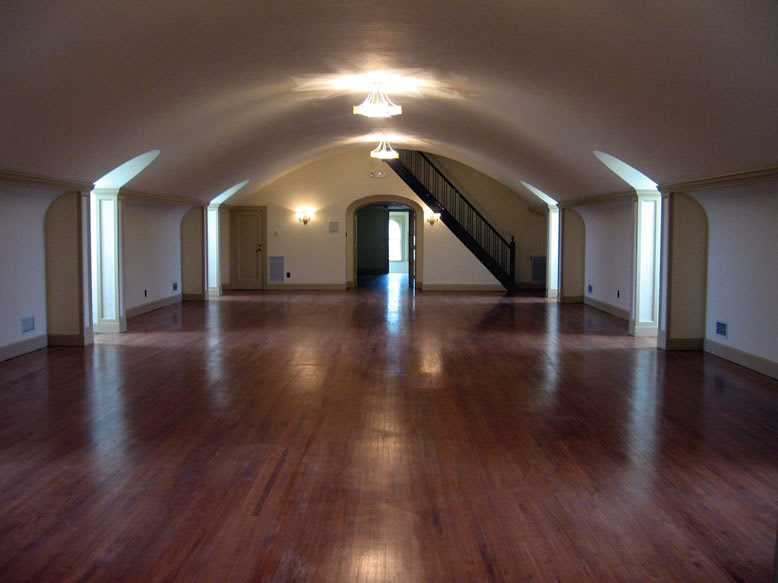 Naturally when the asylum "closed down," the Melon Heads were set free into the woods. There they became wildmen, who hated "normal" people and would attack them on sight. I have even heard that they took refuge in a complex system of caverns, which stretched all the way to Ottawa County, and that they used the cave network to abduct people.

What is truly amazing is just how profoundly the story of the Junction Asylum and the Melon Heads has persisted, despite the fact that no such institution ever existed. Where the "Junction" name could have come from is anyone's guess, but clearly the idea of the Melon Heads was some insensitive reference to those afflicted by hydrocephalus. 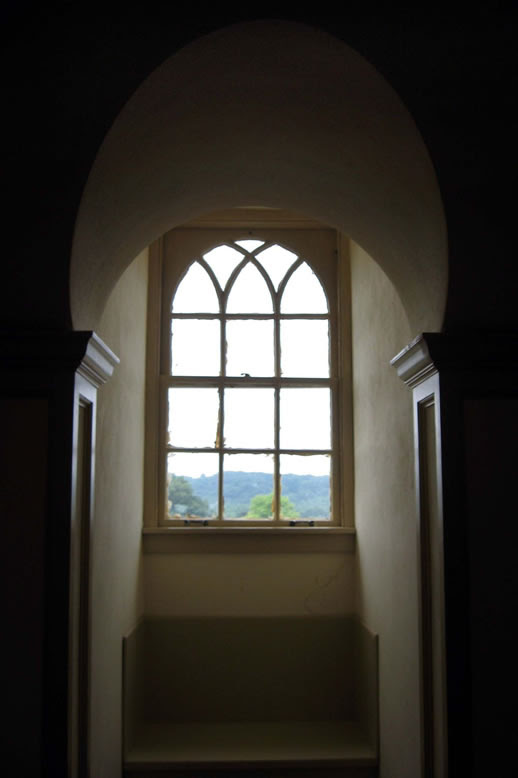 But as the Felt Mansion began to slide into decline, a magical thing happened...people here actually seemed concerned about their local history, and sounded the alarm to act on its behalf before it became too late:

The mansion today stands empty, a target for vandals and the elements. Presently in excellent condition in the interior, the mansion's decaying exterior will soon give way to more permanent interior damage...that is, unless we, as concerned citizens, historians, and preservationists, do something.

Volunteers from around the Saugatuck area joined forces in 2002 as the Friends of the Felt Estate, and worked to return the mansion to its original 1920s luster, for use as a National Historic Landmark, and event space. A rare instance in this day and age of a victory for historic preservation. 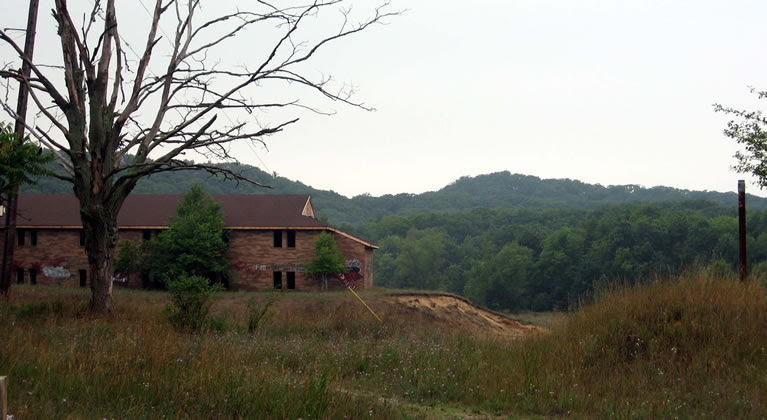 After touring the mansion I wandered out on the old farm acres toward the remaining prison dormitories, which were scheduled to be demolished pretty soon. 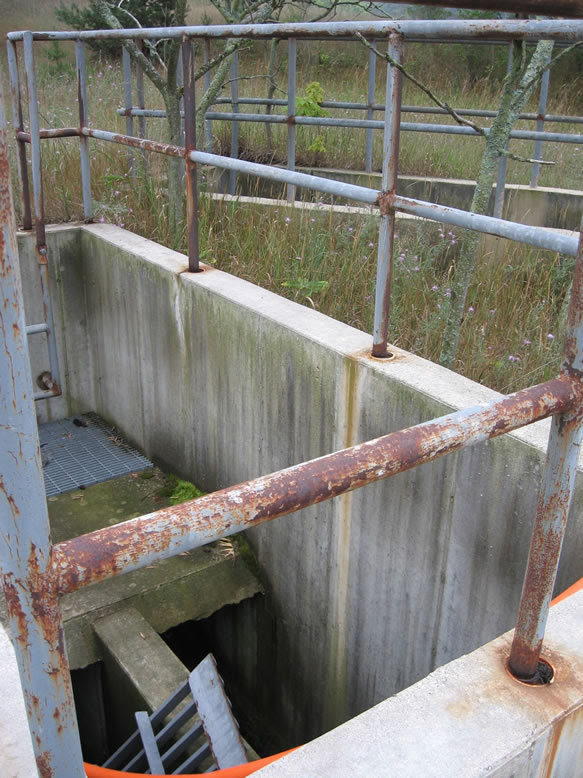 Architecturally they are modern crap, virtually identical to most other medium-level corrections structures found across the state, so they weren't very fun to explore, but at least I can tell myself that the savings garnered over building more appealing structures was passed on to us taxpayers. 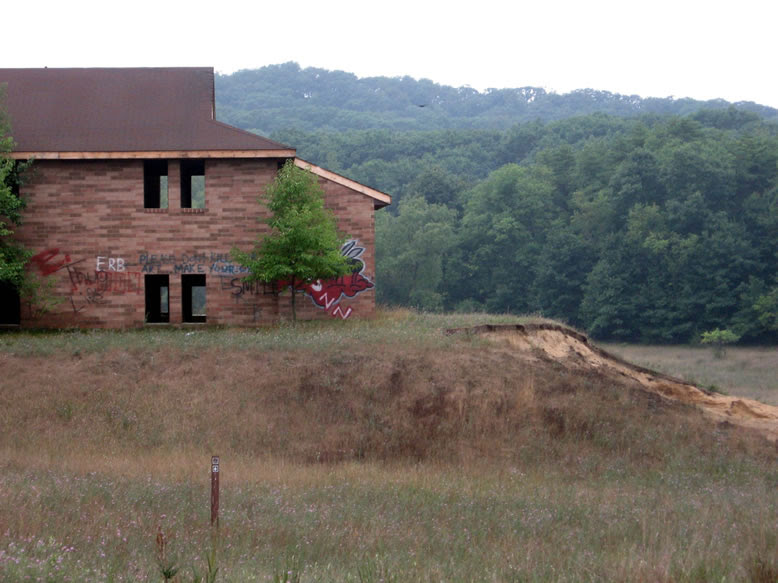 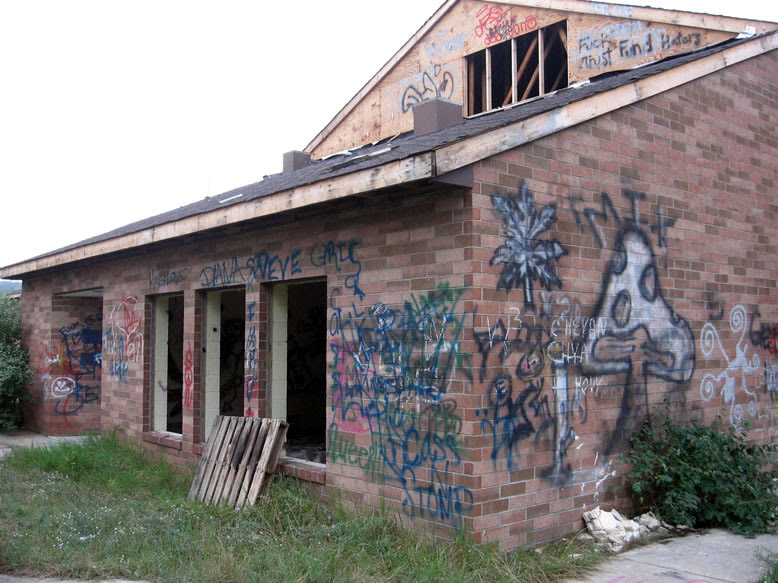 What the f#@$% is going on in here with all the hearts? 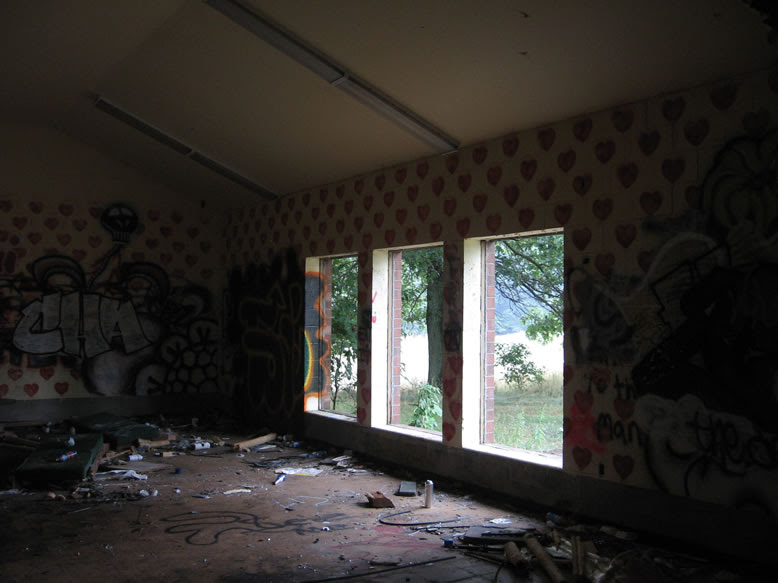 Saugatuck may be the gay capitol of Michigan, but I had them pegged as better interior designers than this. Not even any of the graffiti was any good. 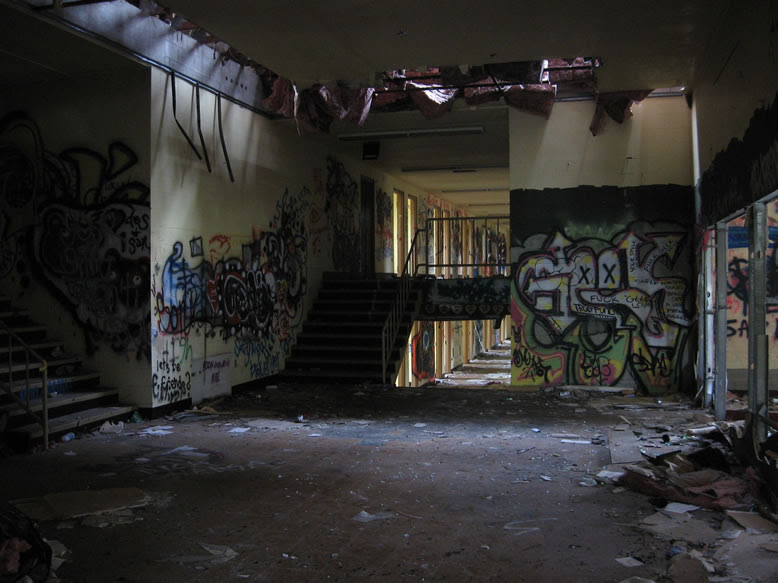 Looks like the place had been gone-through pretty thoroughly, as damned little in the way of artifacts remained. Even the cell doors had been removed. 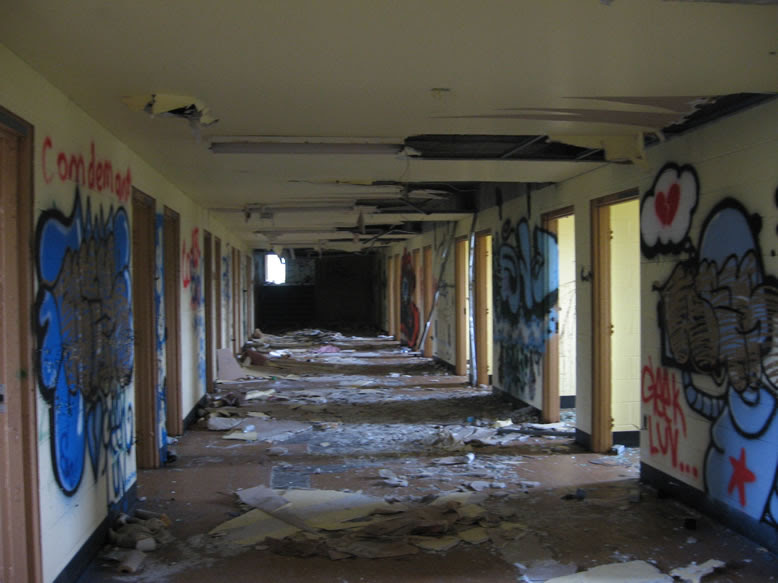 For what it's worth, this site is located not far from one of Michigan's most famous ghost towns, Singapore, which famously disappeared beneath the shifting sands of Lake Michigan's dunes in the 1930s. 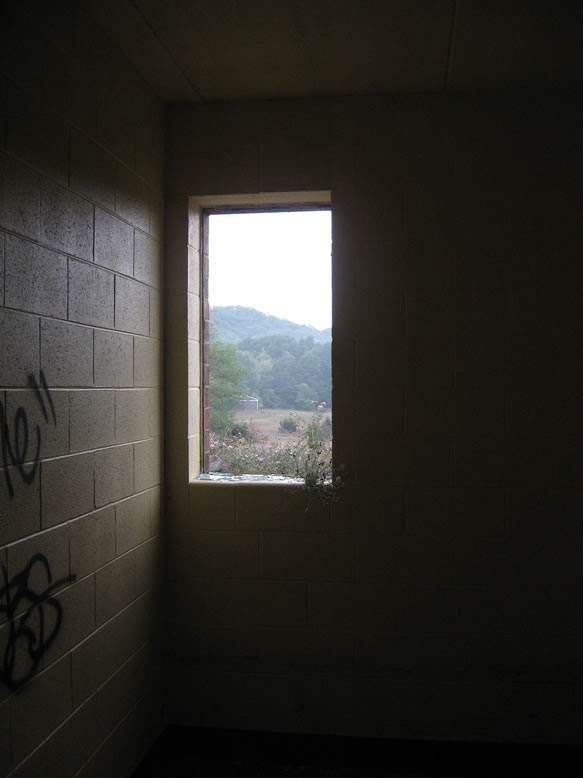 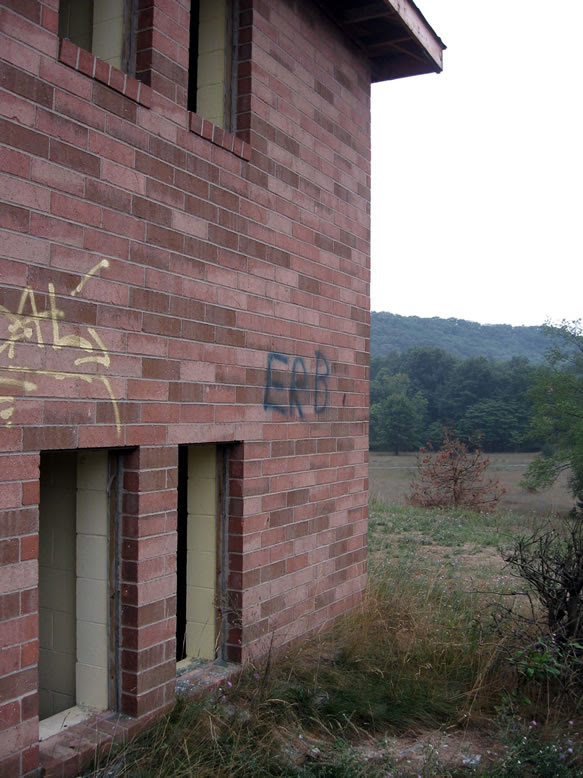 According to a study, Mr. Felt was what they used to call a "gentleman farmer." He was interested in conservation too. He in fact used this acreage to experiment with conservation practices, such as planting over three thousand trees to control erosion. Felt also grew fruit, and built a dock here so that he could ship his crop to Chicago. 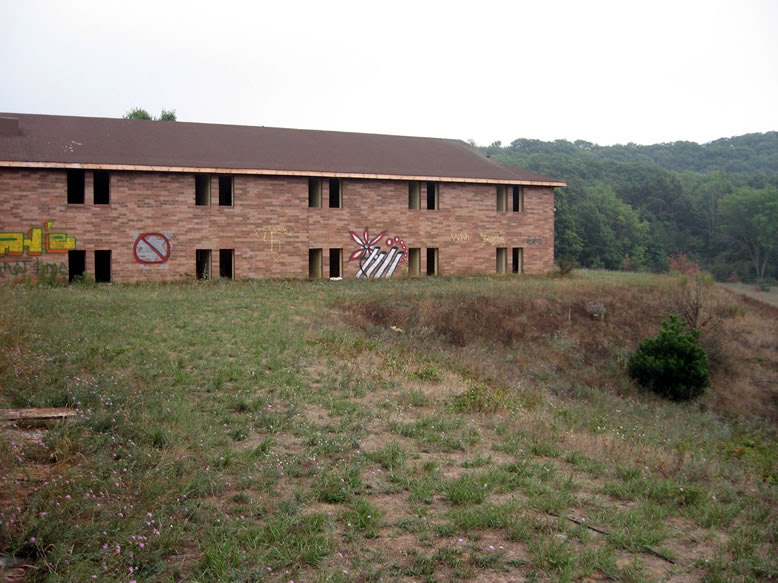 Some trumpet vine or rosebush variant had begun taking over this particular dorm: 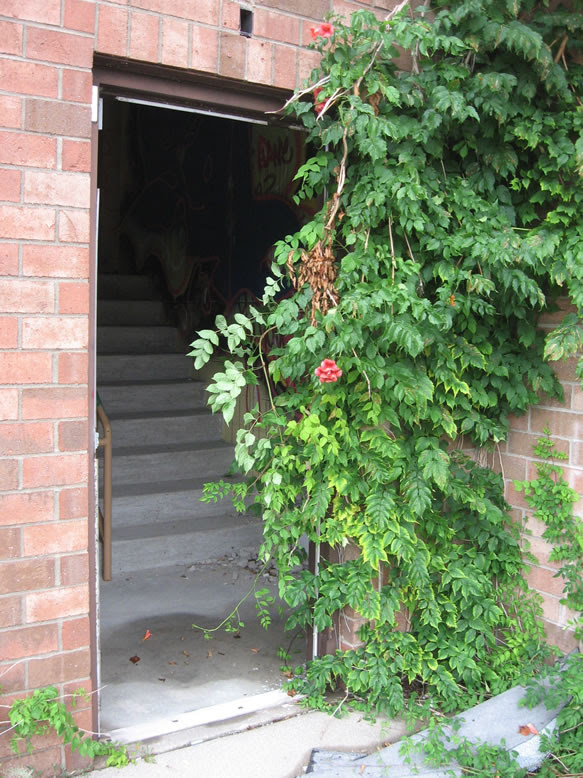 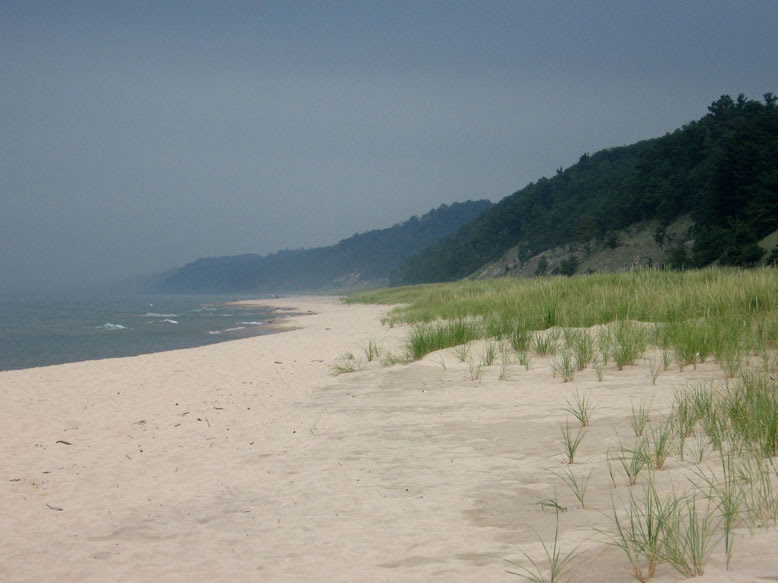