In the morning at Rockport I could not get ahold of Captain Mike about Middle Island so I kept going to the Straits. Stay tuned for an upcoming post on Middle Island. From Michigan’s newest state park I headed straight for Michigan’s oldest state park—Mackinac Island. Yeah, I know what you're thinking, but bear with me.

Mackinac Island is one of the most popular tourist attractions in Michigan, and also the source of one of the Yoopers’ favorite slams on “down south” people. One derogatory term for downstaters is “fudgies” because evvvvveryone and their cousin comes to Mackinac for the renowned fudge shops. I personally don't give a damn about fudge; I am into history, and the island is soaked with it. Not only is it Michigan’s first state park, but it was also America’s second national park after Yellowstone (designated in 1875). 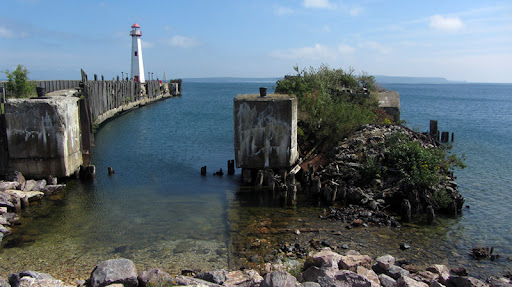 I crossed the Mackinac Bridge and drove to the old end of St. Ignace where the docks are, on East Moran Bay. Actually, there was a French fort located here in the year 1679 (at what is now 566 North State Street), called Fort de Buade, but it was abandoned by 1701. A small earthwork remains in that area, though it is thought this may be related to the walled Huron Indian village that was there at the time. The French were thought to have had a post here as early as 1627. Fort de Buade had been founded first as a mission by Fr. Marquette, and later as a fort was commanded by none other than Antoine de la Mothe Cadillac who went on to found Detroit.

The ruined dock pilings I was looking at were vestiges of the former railroad ferry business that once existed between the Upper and Lower Peninsulas. 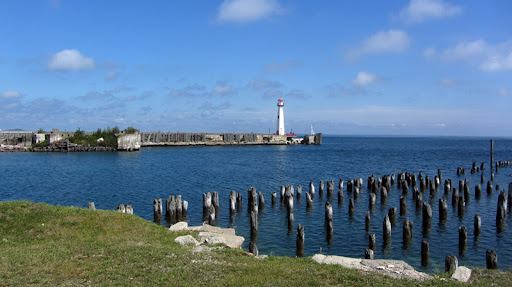 Out across the water was the high silhouette of the great Mackinac Island: 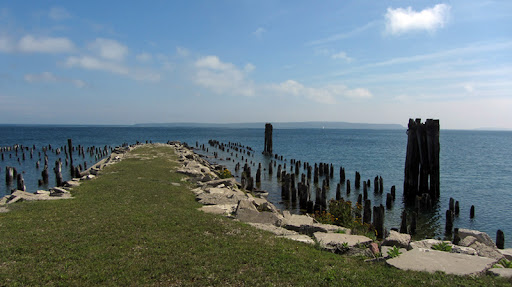 I had purchased a ticket for both my bicycle and myself, since motor vehicles are forbidden on Mackinac Island, and with about half an hour to kill I wandered the immediate area to get something for lunch. A pasty to go from a local diner was the perfect solution as always. I was soon munching while cruising across the water toward Mackinac Island for the first time since somewhere back in my childhood. At any rate it was so long ago that I had no real memories of it that I could dredge up no matter how hard I tried. Surely that is a good enough excuse as any to go back now, I suppose.

When I saw the white walls of Fort Mackinac itself, I did recognize it from pictures at least: 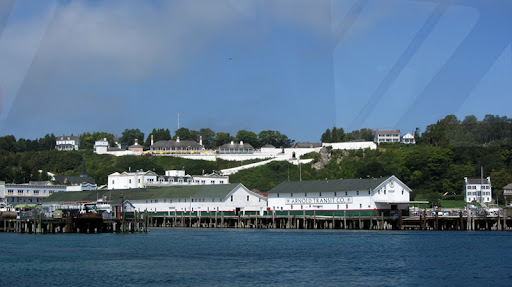 Scarfing the last of the pasty (I had not calculated that the boat trip would be this short), I jumped off the ferry and found myself on the touristy streets of Mackinac Island. As crowded and touristy as it is, this island does contain some of Michigan’s oldest buildings and most important history. I hopped on my bike and joined the fray. I figured a good place to start would be the fort. 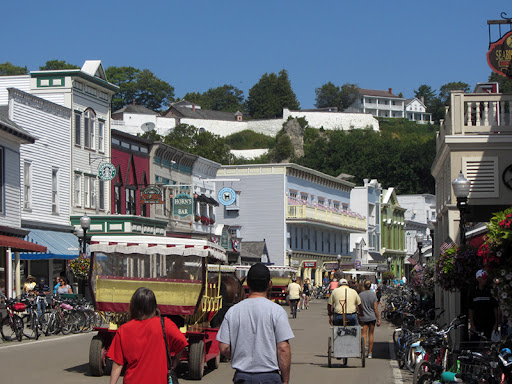 I climbed the super-steep hill wrapping up behind the fort. I had decided that my first goal would be the old lime kiln, if indeed I could find its ruins. There was a short “Lime Kiln Trail” marked on the map, so it stood to reason that that would be the place to look. My main goal was an abandoned mansion at the north tip of the island. Upon coming to the top of the killer hill behind the fort, I was huffing and puffing from having to push my bike up, and was surprised to see the Michigan gubernatorial summer mansion right here: 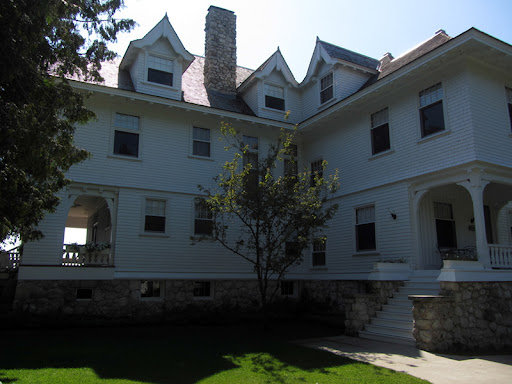 I wondered if Darth Snyder was in, but I couldn’t detect any malicious shadows lurking within, nor any sinister theme music playing. I enjoyed the nice view from here while catching my breath and deciding which road to take. The front of the house faces out across a breathtaking view of Lake Huron.

Unfortunately I could not locate the lime kiln ruins, and the "abandoned" mansion was no longer abandoned. Hopefully I'll have a more productive trip in the future. I did however spot some un-looked-for ruins in the shade of a small glen at the crossroads near the governor's crib: 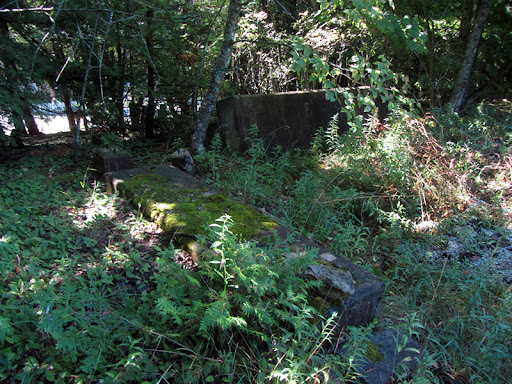 I have yet to learn what they went to.

It didn’t take too long to find Lime Kiln Trail, but after having gone up and down it twice without seeing any clues at all, I gave up and tried aiming for Arch Rock. I somehow got lost and suddenly burst out of the woods at Sugar Loaf:

Look closely in this photo to see a freighter sailing off in the distance:

Along my way I passed the site of the battlefield where 13 Americans were slain and over 50 more wounded in a desperate amphibious attempt in 1814 to recapture the island from the British during the Second Battle of Mackinac, exactly 199 years ago.

Out here across these Caribbean-blue waters lay the Big and Little St. Martin’s Islands:

Along my right the impossibly steep and overgrowth-choked slopes of loose rock evidenced why the combatants in the War of 1812 referred to this place as a “perfect Gibraltar.”

Finishing my loop back into town again on the south side of the island, I figured it would work best to work my way back up to the forts and anything else I might have missed up in the woods, like Skull Cave. There are other natural features that I missed, such as Chimney Rock, Cave of the Woods, and Crack-In-The-Island, which I did not know about until I got home. There are also significant portions of the island that are private, and may contain cool stuff not on the maps. Another return trip in the future is in order, perhaps once I figure out where that damned lime kiln is.

Circled back up to check out the top of Arch Rock:

Not far from there was an unexpected surprise:

The Nicolet Watchtower was essentially a lookout position atop an outcropping near Arch Rock. Not a bad view.

I now set myself upon the almost vertical path to Fort George. Upon reaching the top in a profuse sweat, I immediately saw the diminutive earthen redoubt that crowned the summit of the island:

After the War of 1812 ended, the Americans renamed it Fort Holmes (after Major Holmes, a casualty in the Second Battle of Mackinac) but continued to garrison only Fort Mackinac, while abandoning this crude, earthen redoubt and allowing it to fall into ruin for over a century.

It was not until 1936 when the Civilian Conservation Corps cleared and rebuilt Fort George that it was returned to its original appearance, though the reconstructed blockhouse and magazines have rotted completely away again since then.

I didn’t know it, but the park had announced in July (a month prior to my visit) that they were planning another rebuild for Fort George.

Again, this is the summit of the island, which has to be the tallest point anywhere in the Straits area. The view from the parapet here shows Round Island, and Bois Blanc Island in the distance:

After the climb back down from Fort George, I was parched. I quaffed more well water and continued on to Skull Cave.

Skull Cave was a limestone breccia sea stack that had a pocket carved out of it by wave action 11,000 years ago. Again, this is the upper crown of the island, one of the few things that was above the ancient water levels (221 feet higher than the level of Lake Huron today). However it was an event exactly 250 years ago, in 1763 that makes it historic. That was the year of Pontiac’s Rebellion, wherein Anishinaabe tribes captured Fort Michilimackinac, which sits at the southern end of the Mackinac Bridge.

On June 2, 1763, a band of friendly local Ojibwa staged a game of baaga’adowe (lacrosse) near Fort Michilimackinac, and “accidentally” lost their ball over the wall of the fort. The British soldiers let them come in to retrieve it, but instead the Ojibwa slaughtered most of the whites inside, and held the fort for over a year. Whether the tribesmen continued playing baaga’adowe with the severed heads of the British afterward is not recorded, heh.

One man who escaped this bloodbath was a fur trader named Alexander Henry. He fled to Mackinac Island to avoid having his head chopped off, and hid here overnight in Skull Cave. In his memoirs he writes,


On going into the cave, of which the entrance was nearly ten feet wide, I found the further end to be rounded in its shape, like that of an oven, but with a further aperture, too small, however, to be explored. After thus looking around me, I broke small branches from the trees and spread them for a bed, then wrapped myself in my blanket and slept till day-break. On awaking, I felt myself incommoded by some object upon which I lay, and, removing it, found it to be a bone. This I supposed to be that of a deer, or some other animal, and what might very naturally be looked for in the place in which I was; but when daylight visited my chamber I discovered, with some feelings of horror, that I was lying on nothing less than a heap of human bones and skulls, which covered the floor!

Skull Cave was in fact a Native American burial site, which is how it gets its name—not because of its shape. Therefore, I did not venture forward to get photos of the inside, but from what I understand there are no longer any skeletal remains to be found.

Speaking of interment of the dead, Mackinac Island has quite the share of cemeteries apart from this aboriginal cave of bones:

There are at least three other white-man cemeteries in this immediate vicinity. I assume St. Ann’s is the catholic one, and the other one is protestant. The third is the post cemetery—that of the fort itself. All three contain burials from the early 1800s. The original cemeteries were down in town, in the churchyards, but by the late 1800s these had filled up and most burials were exhumed and moved here uphill.

Many casualties from the War of 1812, both British and American, are buried here. A plaque reads,

“ON FAME’S ETERNAL CAMPING-GROUND THEIR SILENT TENTS ARE SPREAD, AND GLORY GUARDS WITH SOLEMN ROUND THE BIVOUAC OF THE DEAD.”

Here is Fort Mackinac itself again, one of the oldest (anglo-constructed) structures still standing in Michigan, dating to the 1770s:

Since the rest of my activities on the island that day were rather humdrum, we can skip directly to the next episode.