Middle Island, Pt. 2: “Spared to Do Such Noble Work”

Soon we were bucking the waves across the two-mile expanse of Lake Huron to Middle Island (MAP). Thanks to Captain Mike’s powerful twin-engined craft we were there in minutes. 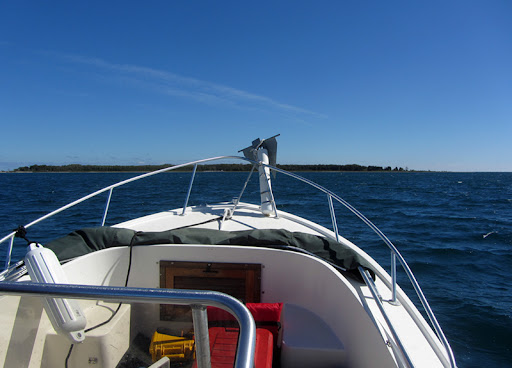 Once on land we offloaded our gear and loaded it onto a four-wheeler, which we then drove to the area we were going to be working in.

There doesn’t seem to have been much history of human habitation on Middle Island that I know of besides the lighthouse and USCG Life Saving Station, but we did find this ruined wall that possibly belonged to an outhouse or hunting shack: 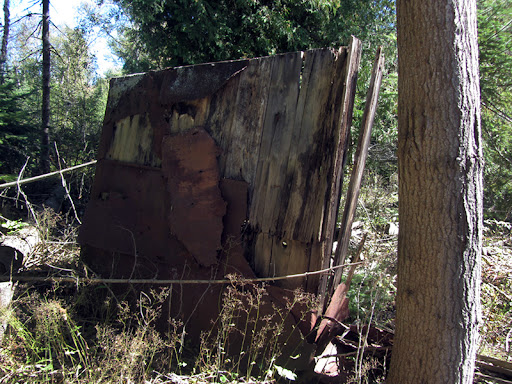 Middle Island got its name because it is situated almost exactly midway between Thunder Bay Island and Presque Isle Harbor. A lighthouse was established on Thunder Bay Island in 1832 and Presque Isle Harbor in 1840, though in 1896 the Lighthouse Service still desired another lighthouse and fog signal on Middle Island, since it was the only natural harbor of refuge between the two existing lights (at least until Rockport Quarry opened their harbor in 1915).

Middle Island’s diminutive size became apparent as we quickly reached the opposite shore: 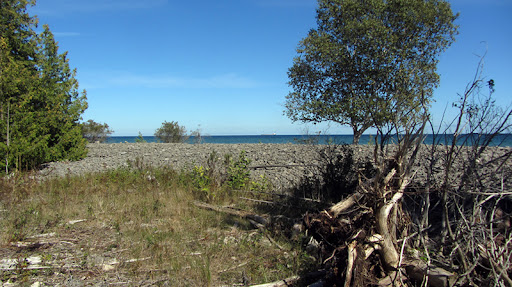 According to Terry Pepper’s website, this island long represented a "triple-edged sword" to mariners…


Marking a turning point in the course for vessels making up and down the coast, the island's lee side also represented an excellent harbor of refuge in which to escape Huron's fury. However surrounded with shoals with depths of less than six feet on all but its northeast side, the refuge could be hard to find in dark of night or in the thickest weather. In fact, the area was considered dangerous enough that the Life Saving Service built a station on the island in 1881 to help service ships in distress in the area.

The smashed ruins of that U.S. Life Saving Service station sat on the opposite end of the island from us, near where we docked. This stretch of Lake Huron was known as “Shipwreck Alley” in those days, due to the extensive shoals throughout this complex of islands along the coast of Alpena County. Today it is called the Thunder Bay Underwater Preserve and features 20 dive sites, 15 of which are shipwrecks, and date back to the 1850s or further. At least two shipwrecks lay on the bottom in the immediate vicinity of Middle Island itself, the Portsmouth, which sank in 1867, and the John J. Audubon, which went down in 1854. The rest can be viewed on the excellent mapping feature of the preserve’s NOAA website, which includes superb underwater photographs of all the wrecks.

I don’t know if you can see it in the photo, but there is a freighter in the distance, heading upbound: 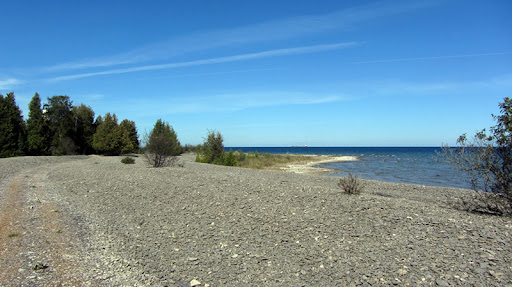 Middle Island is pretty barren and gravelly, seeing as it shares the same geology as most of the rest of Alpena County. No pristine sand beaches here: 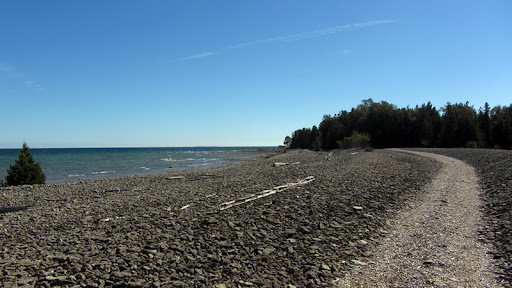 In the distance, Thunder Bay Island to the south: 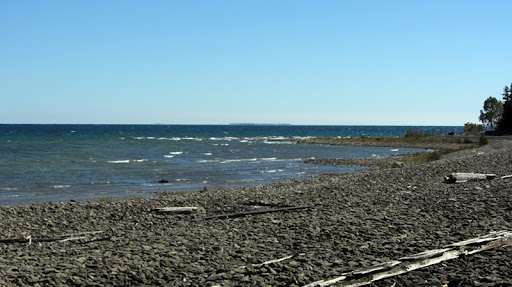 That island has a decommissioned lighthouse of its own, too.

Not much further into the woods, we came within range of the light station, as evidenced by this marker: 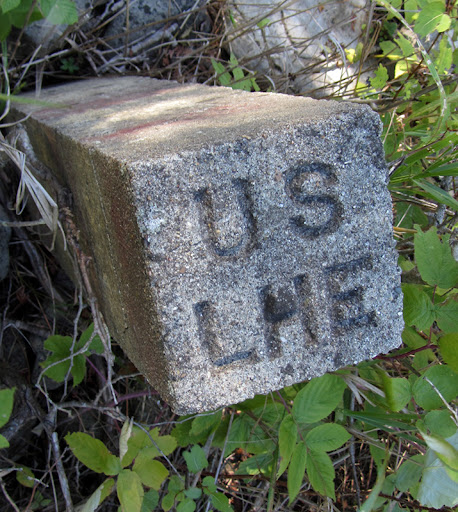 I assume it stands for “United States Light House Engineers”?

Middle Island Light served to mark an important turning point along the mariner’s way through Shipwreck Alley, and was built from 1904 to 1905. It was 76 feet tall and equipped with a fourth-order Fresnel lens that shone a fixed red light. It was upgraded to a third-order Fresnel in 1928, electrified in 1938, and changed to a flashing green light of five-second intervals. 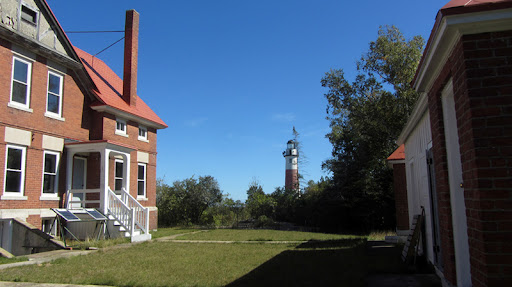 According to LighthouseFriends.org, the station was automated in 1961, and in 1972 the entire island except for the light station’s two acres was transferred to Alpena County.


A local group started working on the abandoned property in the early 1980s, but when the magnitude of the effort required to restore the structures was realized, the parcel was given back to the government. 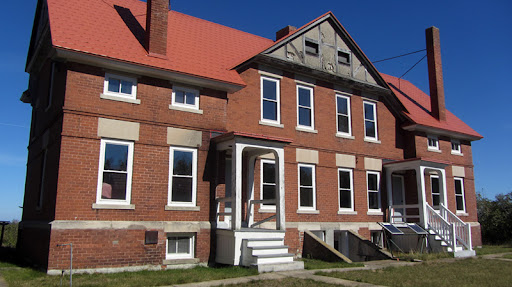 In July 1989, Marvin Theut became the new owner of the duplex and fog signal building after being the highest bidder in a sealed-bid auction, and the following month, two of Marv’s sons and two other men went out to the island to board up the duplex. The lake was calm when they ventured out with three boats that morning, but later that afternoon, four-foot waves started breaking on the island’s rocky shore. As they were leaving the island, their two rowboats swamped, nearly drowning one man. They wisely decided to re-anchor the motorboat and remain on the island. Not long thereafter the anchor line snapped, and the boat joined them on shore. A passing Coast Guard vessel spotted the wrecked boat, and, after summoning the men out of the duplex with its horn, it radioed in a helicopter to take them to safety. The Theuts had quickly learned that restoring an offshore station was not going to be an easy task.”

Marv Theut formed the Middle Island Lighthouse Keepers Association as a non-profit in 1992 to continue the rehabilitation of the station, and in 2001 opened the fog signal building as a B&B for overnight guests to help raise funds for the resto. 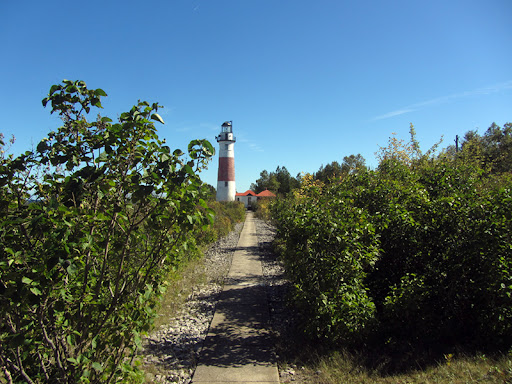 Theut also co-founded the Great Lakes Lighthouse Festival, held in Alpena every October. During the 2002 festival, a man showed up bearing one of the glass panels from Middle Island Light’s Fresnel lens. It turned out that this man broke into the light as a teenager in 1975 with some friends, and removed the panel. While one panel is back home, the whereabouts of the rest of the lens remains a mystery. 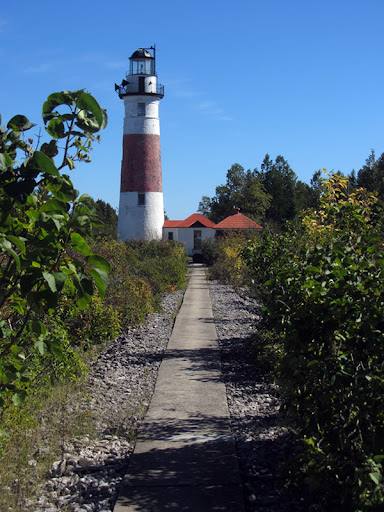 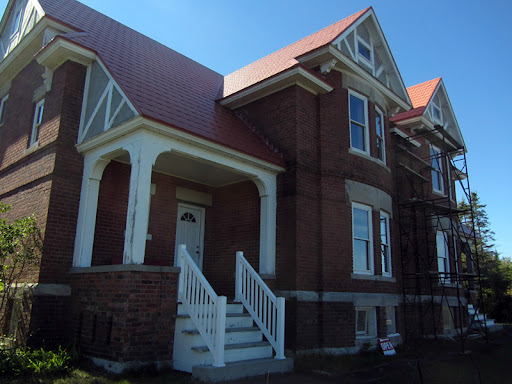 Captain Mike and I worked for a couple more hours, just chainsawing up fallen trees and weedwacking the trails. We also looked for and uprooted any invasive weeds we saw. For whatever reason I neglected to actually go up to the lighthouse itself. Sorry. 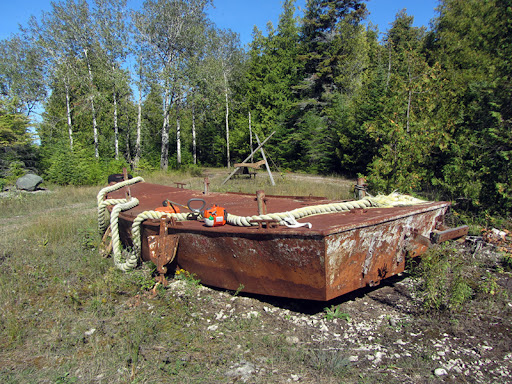 Finally we arrived back near the dock. This old relic was sitting there, and Captain Mike explained that it was the barge that had been used to salvage the propeller from the wreck of the Nordmeer, a locally famous shipwreck not far from here that ran aground in 1966 off Thunder Bay Island. It was well known because after it sank, part of the hull remained protruding conspicuously above the waterline until just recently when it was sheared off by lake ice. 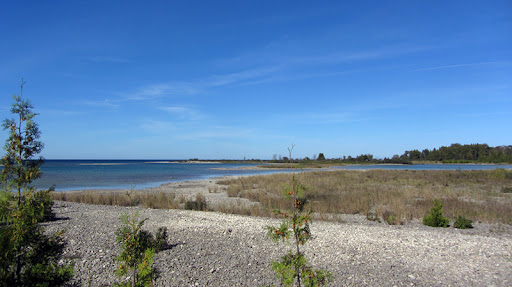 On our way back to the boat, I realized that we were within sight of the ruins of the old Middle Island Life Saving Station out across the harbor. Even though it had long since been reduced to a mere pile of splintered wood by Huron’s fury, I didn’t want to come to the island and not see everything there was to see, so I asked Captain Mike whether he minded if I take a quick hike over there. He said to go ahead, but he was going to nap in the boat in the meantime. 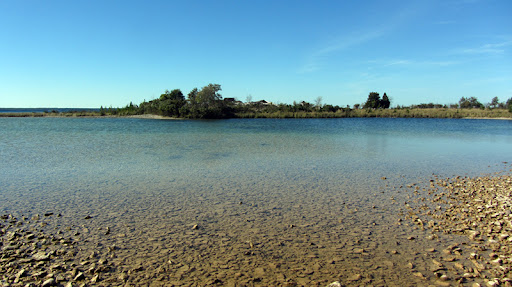 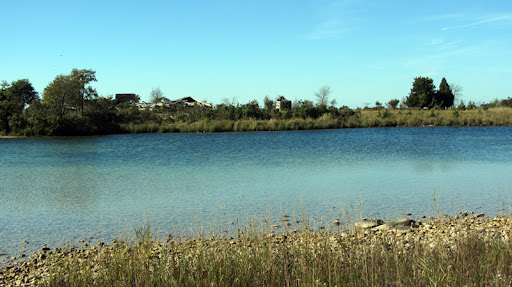 According to the Thunder Bay National Marine Sanctuary webpage, the Middle Island Life Saving Station and the other one on Thunder Bay Island were “among the busiest stations on Lake Huron, assisting hundreds of vessels every year and saving thousands of lives.” There were a total of six lighthouses in the area as well. 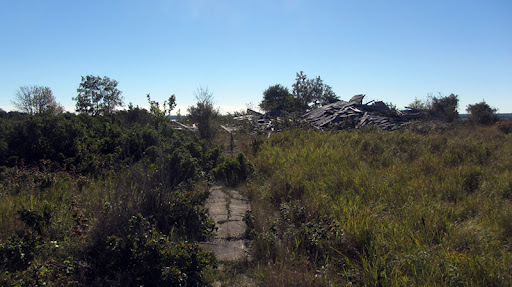 The station was abandoned in 1969, according to the Great Lakes Lighthouses Encyclopedia. 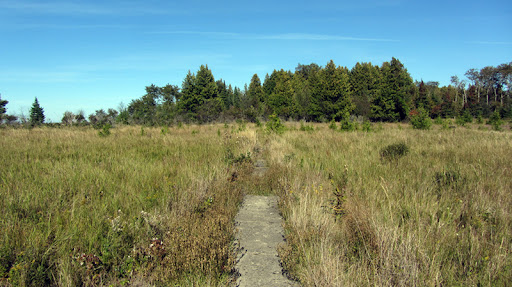 Two old photos of the station appear in the book United States Life-Saving Service in Michigan, by William D. Peterson. 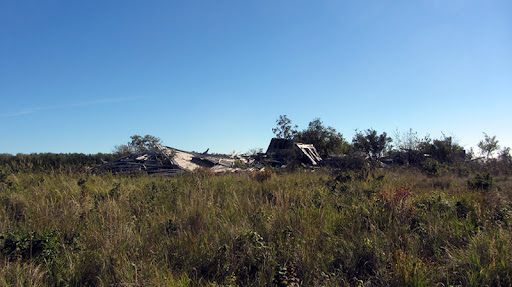 Perhaps some of you didn’t grow up in the Great Lakes and don’t know what a lifesaving station is. Like the U.S. Lighthouse Service, the U.S. Life Saving Service (USLSS) was created by Congress in the 1800s to improve safety on our navigable waterways by setting up stations in certain more-hazardous areas to rescue mariners in peril.

In the 1800s the ships that plied these waters were much smaller and less able to battle the high seas that could be encountered in a Great Lakes storm, and furthermore they did not have radar, satellite guided nav systems, or computer-equipped buoys. Unlike the behemoth lake freighters of today they needed to sail closer to shore, so that they could stay in sight of land. Of course, that is where the most hazards and obstacles are, so it was just a fact of life that the maritime business was downright perilous, and shipwrecks were much more common than today. 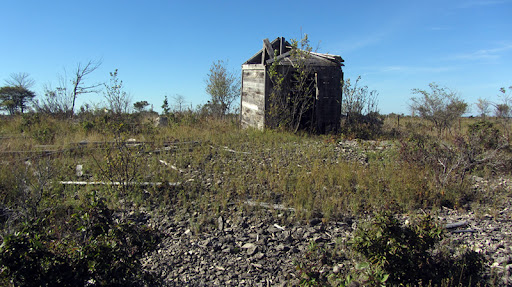 A lifesaving crew lived at the station (often located in a very remote and inhospitable location) and trained extensively in the use of boats and other lifesaving equipment such as cannons that could fire a rescue line out to a foundering ship, which would then be used sort of like a zip-line for pulling stranded sailors in to shore.

The USLSS crew could also mount a standard rescue on one of their large, “unsinkable” lifeboats that launched via a rail dolly that spit it directly into the water. The crew would sail out to the ship in distress and bring the survivors back. 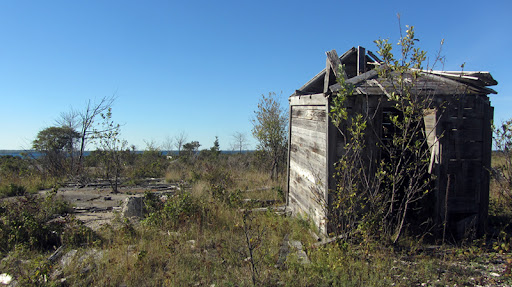 Like the U.S. Lighthouse Service, the USLSS was eventually merged into the U.S. Coast Guard as well, and as helicopters were used to perform maritime rescues these old lifesaving stations were phased out. If I am not mistaken, a historic lifesaving station has been preserved as a museum at Whitefish Point to show how the old USLSS operated. 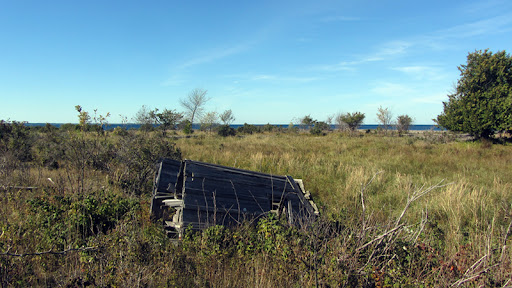 Da two-holer got tipped over, eh!

Still some old shakes defiantly clinging to this shack…you can see all the rows of nails that used to hold them on: 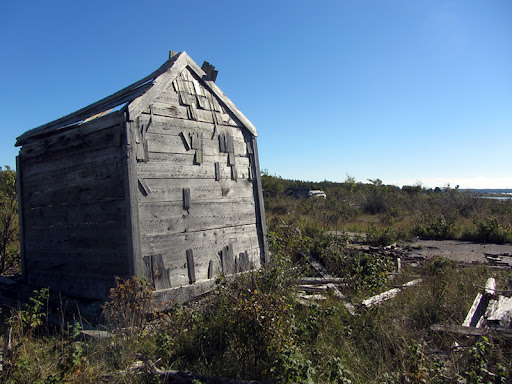 The Annual Report of the Operations of the United States Life-saving Service for 1906 contains a reprinted letter from a Sarnia, Ontario schooner captain whose vessel and crew were aided by the men of the Middle Island Life Saving Station. In it Captain Joseph A. Glass writes back to the keeper and crew of the station upon arriving safely home “without any more mishaps,” thanking them for their services rendered on the night of September 19th, 1905. 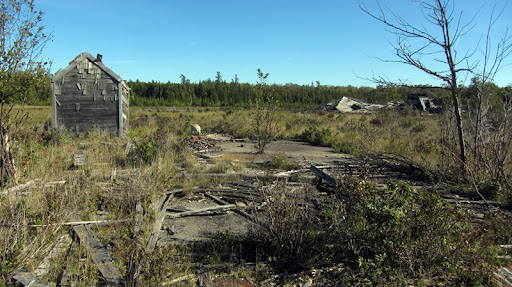 It is not exactly stated what precipitated USLSS involvement that night, but Captain Glass writes,


I believe that had we not received your timely assistance, the Cavalier would never have been here in Sarnia, from the way she was striking bottom. I am also sorry for the man who jammed his finger between the lifeboat and the vessel. Hoping that you may all be spared to do such noble work, I ever remain,

Yours, [signed] Captain Jos. A. Glass 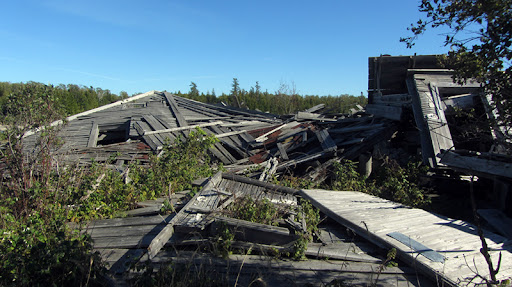 With that I hoofed it back to the boat and we returned to land.