While eating breakfast at Nina’s in Laurium, Rutabaga and I conversed as to what our battle plan for the week was going to entail. I had a laundry list of things to check off, and so did she. The good thing was, we would probably be able to do it all with plenty of time to spare in between time. 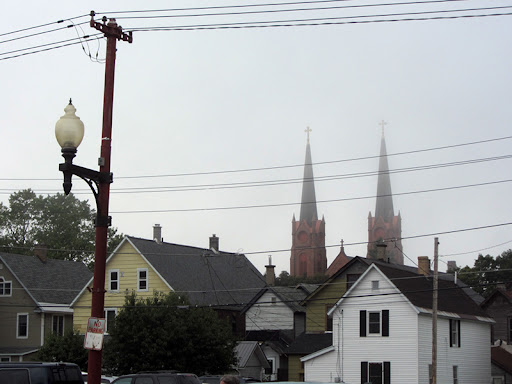 On the way back from Laurium, a trip through Calumet was in order obviously, and we decided on a whim to pop into the Calumet Theater, which I had never personally seen the inside of. Unfortunately, I lacked for a wide-angle lens: 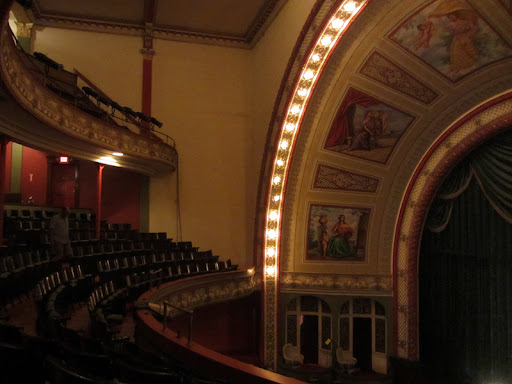 After that we planned to hit the road to Copper Falls Mine, which was probably the main thing I wanted to explore in the Keweenaw this trip, so we started north up the peninsula on US 41. Along the way the weather changed again and the sky was completely clear and blue. Rutabaga noticed that the doors of the old Church of the Assumption in Phoenix were open, which they apparently never are, so we pulled over to investigate. 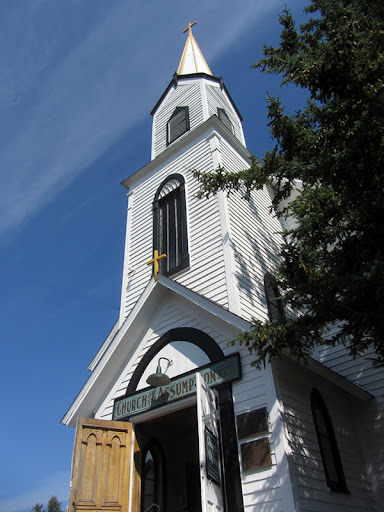 It is in the National Register of Historic places, and was built in 1858. The old town of Phoenix is (as you might have guessed) an old mining town that no longer exists, except for this church, essentially. We were unprepared however for what we saw when we looked inside. 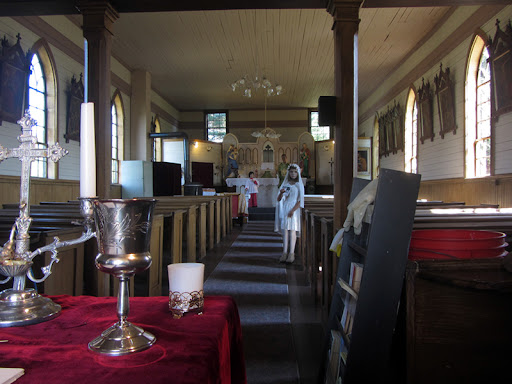 Much to our dismay there was a plexiglass barrier preventing us from going past the vestibule, but the scene it protected us from made this stop worthwhile on a totally different level. 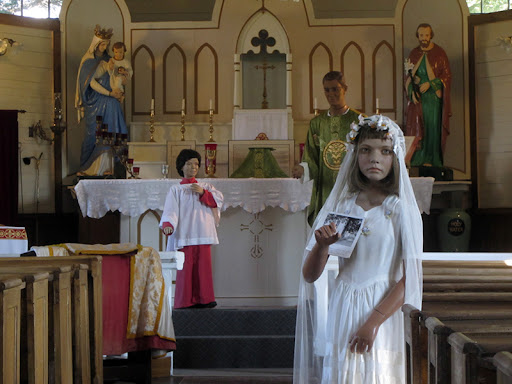 There’s nothing too creepy about that, is there? Just us good ole Yooper mannequins in here, getting our churchin’ on, eh! I think this photo should be on the next Pure Michigan billboard, don't you? 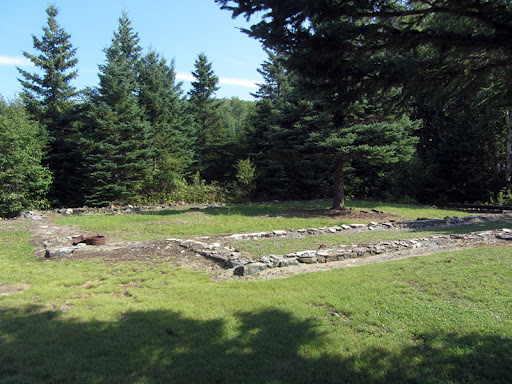 This school operated from 1902 until 1939 when copper mining stopped here at Phoenix Mine. The town peaked at around 1,000 residents in the 1880s when it was in full swing. Mining started in Phoenix in 1844, but the 15 men who founded it nearly all froze to death that winter when the ship carrying supplies was lost at sea.

We continued up US 41. Nearing Central Mine, we took Central Road up the back of Petherick Hill, the home of the Copper Falls Mine, and down the other side. The side of Petherick Hill facing Lake Superior is where the mine was. We spent some time guessing where we should or could park, and where the correct trail was. We saw this nifty little residence: 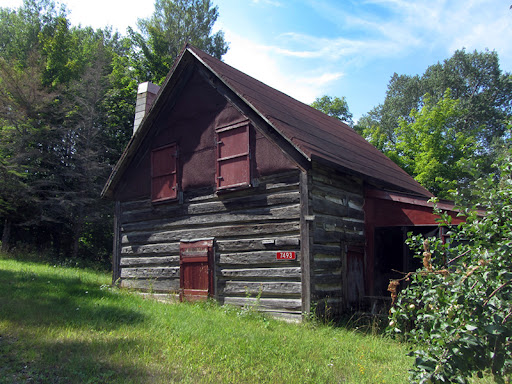 We guessed it might date pretty far back, by the look of it.

Our intended goal was to follow the basic course of Owl Creek, namesake of the Owl Creek Fissure, which the Copper Falls Mine Co. explored for copper. We decided on a trail and almost immediately began to find signs of foundations and walls. I had been told that these woods were absolutely infested with ruins, and much like the old Norwich Mine, I had come here because it was considered to be an “older” area in pristine condition, and to be largely uncharted. The gang on CCE all regarded it as one of the best exploring sites in the Copper Country, and one of the best places to see an early copper mine left in its natural state.


As you can see by the map that Mike Forgrave drew up, the area is riddled with holes: 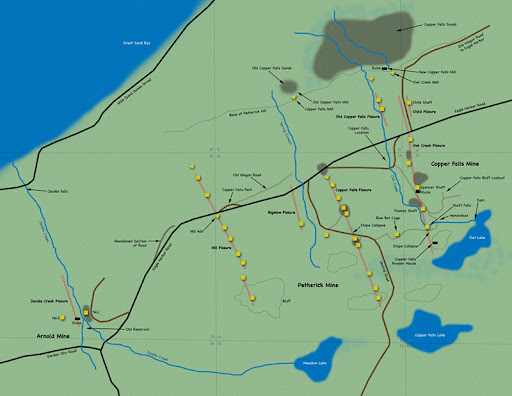 Not only that but the topography was described as “creepy,” in a sense that there were all kinds of holes and stopes and subsidences off in the woods that were unmarked. Not only that, but the icing for me was the story of the presence of “a waterfall that comes out of the side of the hill from nowhere,” or conversely, a waterfall “that seems to disappear into the ground.” Yes please.

Almost immediately we saw the faint traces of what looked to be a retaining wall or crude dam: 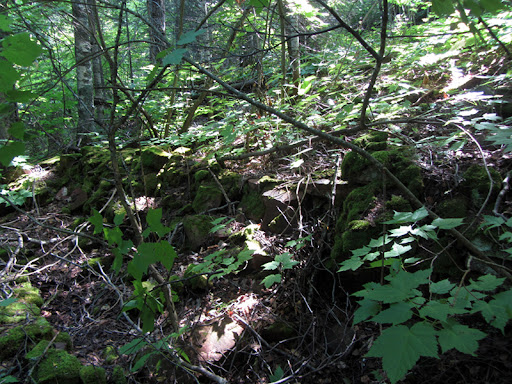 Like the Norwich Mine, the Copper Falls Mine dated to the 1840s and was one of the pioneer mine sites of the Keweenaw copper rush. It was begun when prospectors found an outcrop of pure copper sticking out of the rocky riverbank next to a waterfall. By 1849, the mine had sunk five shafts into this hill, but ran out of money and closed in 1850. 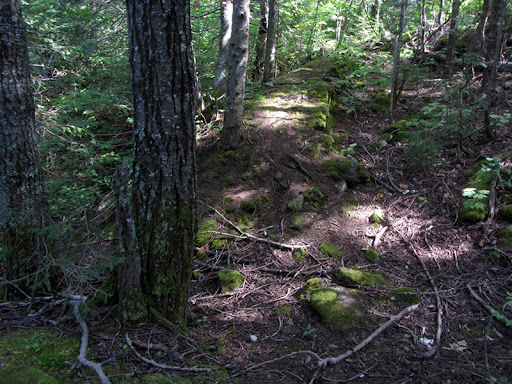 We somehow ended up off-trail rather quickly, and were marching up the steep hill through the middle of the stony riverbed: 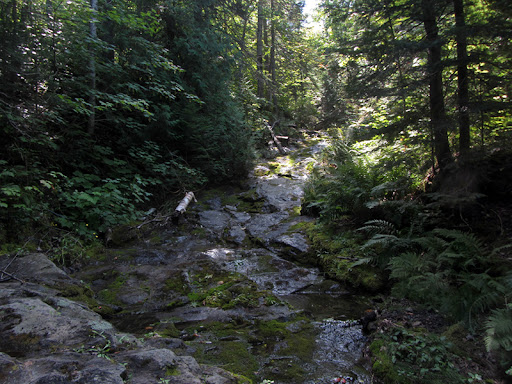 I figured this would be the quickest way to find this mysterious waterfall. The legend of the disappearing waterfall of course is to suggest that the river drains down into the old mine workings below, and reappears elsewhere, bubbling out from a hidden former adit.

Here was an actual wet spot, resulting from a briefly level table in the rock: 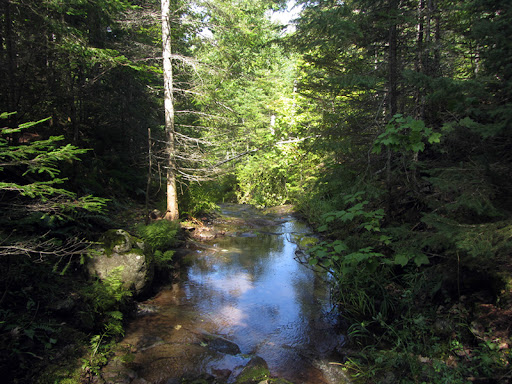 There was also a mini-impoundment of some kind…and though neither of us was sure as to its exact purpose, it did appear rather old: 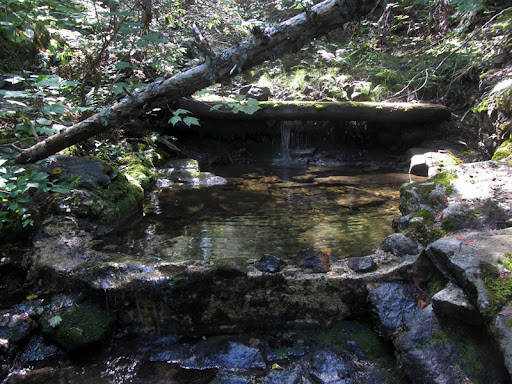 As we were trudging up through the middle of the wild, secluded river, I quickly saw what looked to be a somewhat backfilled mine entrance of some sort, though it was literally punched into the steep overhanging riverbank above us. This made little sense, but I took a photo regardless: 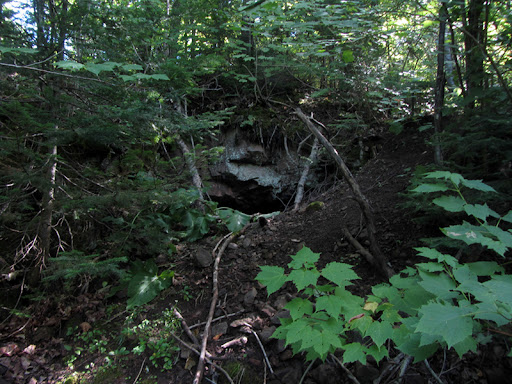 The hole didn’t go in very far. My thought is that this is probably a natural cave, due to the fact that it is probably running perpendicular to any shaft or adit associated with this mine. 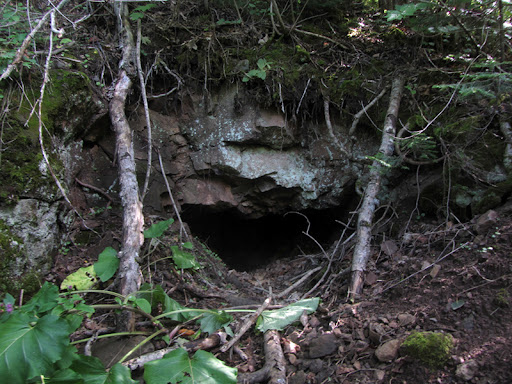 Rutabaga climbs up the bank to join me in investigating the hole: 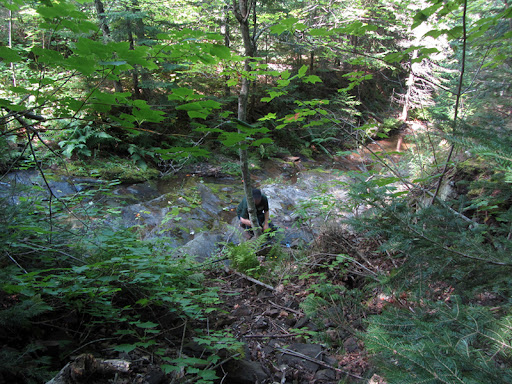 There were also scores of thimbleberry plants here, though sadly the season for them was just ending. We did end up with plenty of handfuls over the course of the day, though most of them were past their prime. Rutabaga had already been up here hanging out in Centennial for about a week prior to my arrival.

Much to my regret I had forgotten to print out a paper copy of Mike’s map (see above) of Petherick Hill, so we were using a lot of guesswork based on the photo of it I had taken in my camera. Further on, I spotted this narrow-gauge rail: 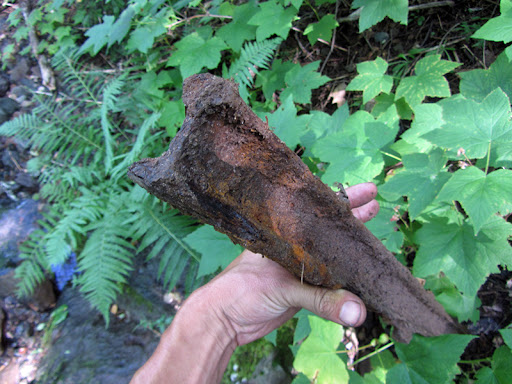 Continuing uphill, we went through areas of the riverbed that were completely dry: 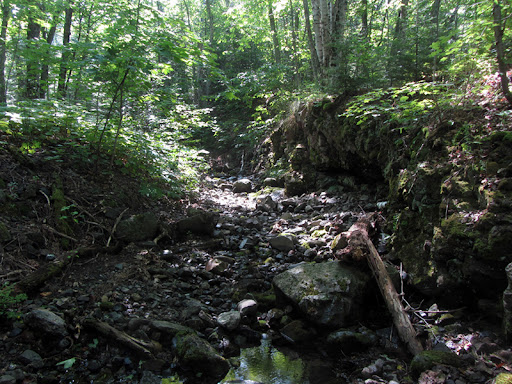 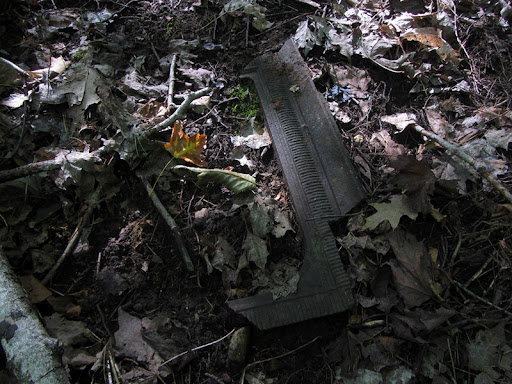 This looks like it could have once been a kibble, which is a bucket that is used to haul rock out of a mine by a rope and pulley, before the advent of mechanized skips: 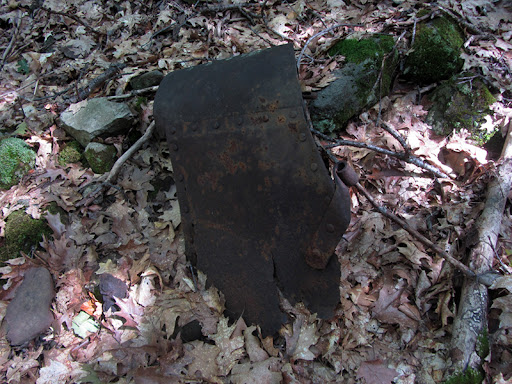 Part of a boiler perhaps: 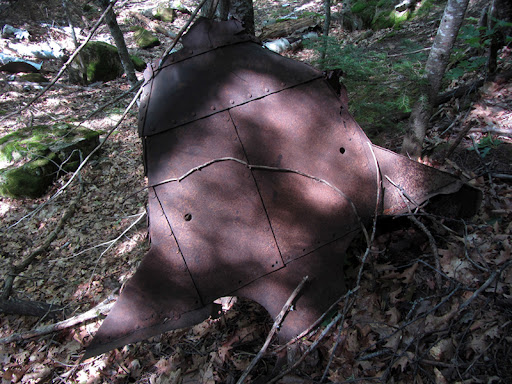 The river forked, and we swatted mosquitoes as we deliberated which branch to follow. I took the lead. We soon popped out on top of an old tailings pile: 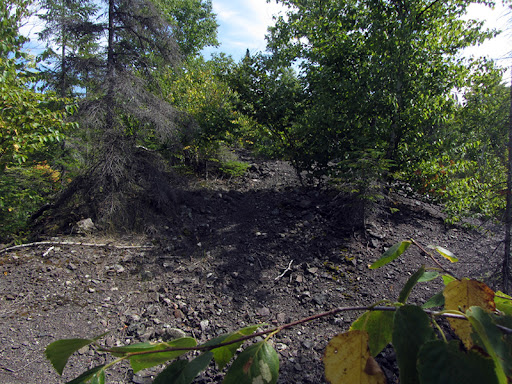 It belonged to either the Thomas Shaft or Spencer Shaft. The fact that it was so overgrown meant that it had not been disturbed in a very long time, since plant life always has a nearly impossible time growing in these loose tailings.

We were nearing the top of the hill. Nearby we noticed the two-track we had left behind when we started following the creek bed. It led into a clearing where I recognized the marked cap of a subsidence area: 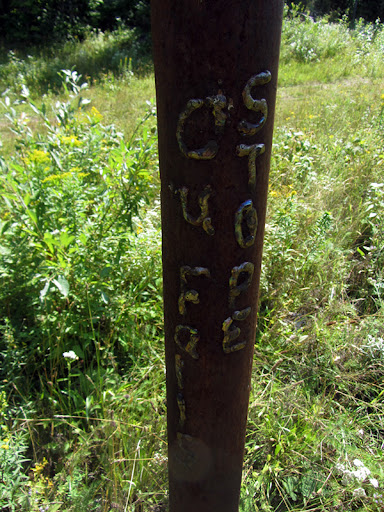 It says “Cu Falls Stope,” which essentially means, “Copper Falls Mine; a stope collapsed here.” This area had been mined out underneath and at some point several years back had collapsed into a sucking Sarlac pit before being re-capped, and marked with this pipe. I remembered from my readings on CCE that this meant we were very close to the top of the hill, and the Copper Falls themselves.

We began walking down the two-track to leave the area when my spidey senses tingled…something told me to stop and go back to take a look inside the woods behind where the pipe was. Sure enough, I heard the hushed sound of spattering water on stone, and could smell extremely faintly the scent of the underground.

Bam--Copper Falls. Or, at least what there was of it: 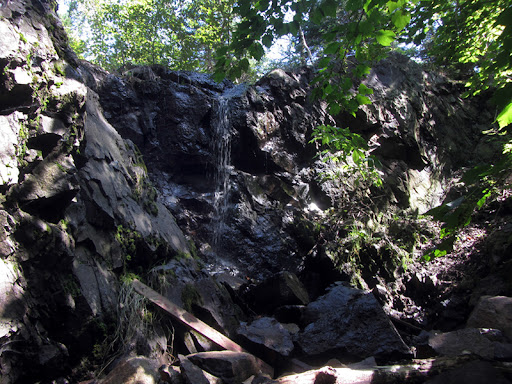