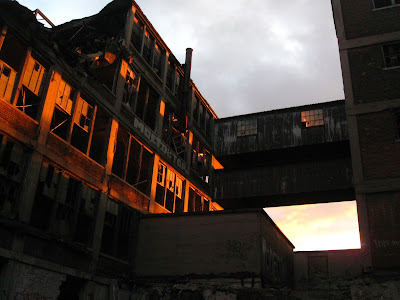 I have a million and one stories from the Packard Plant, and among the many fun nights spent there this one from 2008-ish stands out as one of the better ones (at least the ones my attorney will let me admit to). 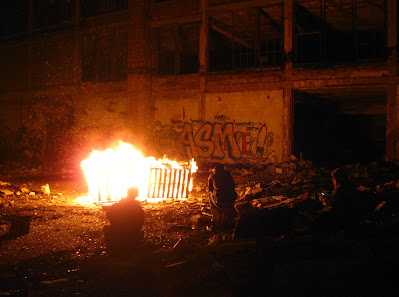 We decided that since director Michael Bay—the foremost user (and abuser) of our abandoned buildings for the purpose of endlessly making lame movie sequels about Go-Bots—decided to leave us a mountain of nice wooden crates, that we could use them for firewood. 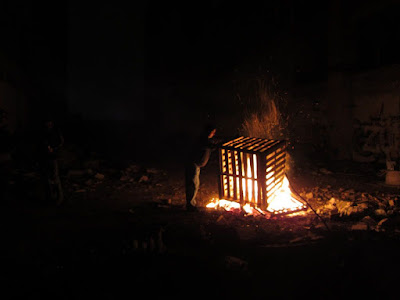 They reportedly had contained pieces of the Autobots shipped to the movie set. 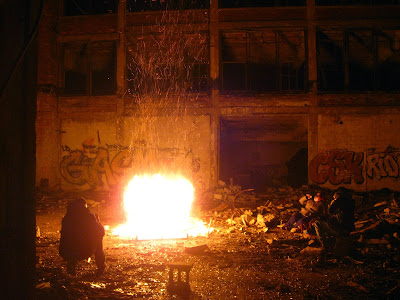 So naturally, we did what a Detroiter does best, which is to set them on fire. 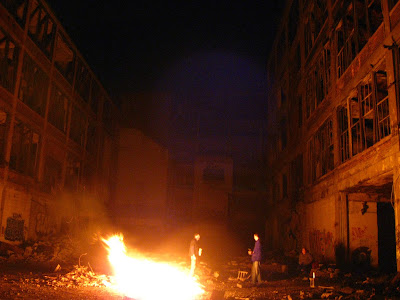 Now, I know what you're thinking—was I behind any of the arsons that roasted various portions of the plant on an almost nonstop basis from 2011 to 2013? No. We only built campfires for sing-alongs and roasting marshmallows.

But seriously, it was contrary to my interests to light large problem fires—that would only have made it harder for me to safely enjoy my favorite hangout spot with impunity. In fact it got to the point that we were actually on the lookout for whatever asshole or assholes were doing that shit, so that we could administer The Beatdown they had coming. 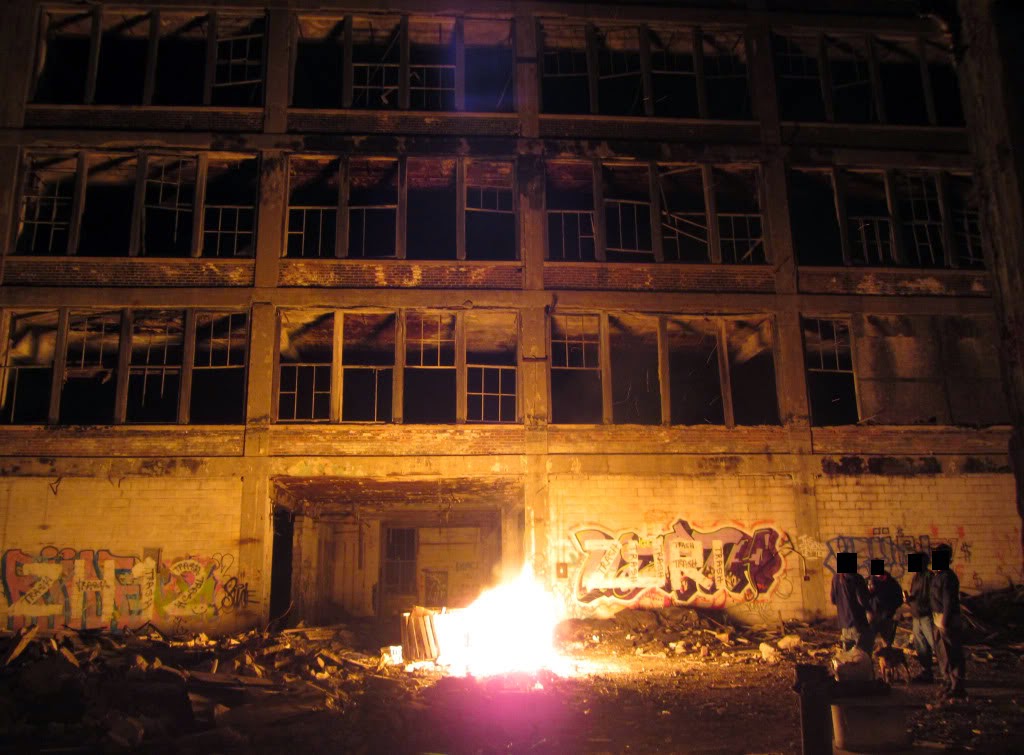 Eventually it got so high profile that I chose to stop going there completely, out of fear of being blamed for it. Nobody needs to be seen hanging around arson bait, so that was the end of our Packard campfire days.

But like I said there was a mountain of those crates back then, so we did our part by helping dispose of them. They burned so nicely! Maybe they were actually Energon Cubes? 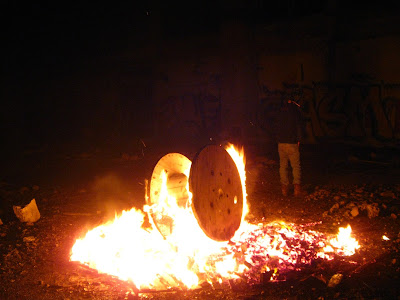 Even old Al came out to enjoy the warmth. It was the least we could do in exchange for him letting us park at his place. 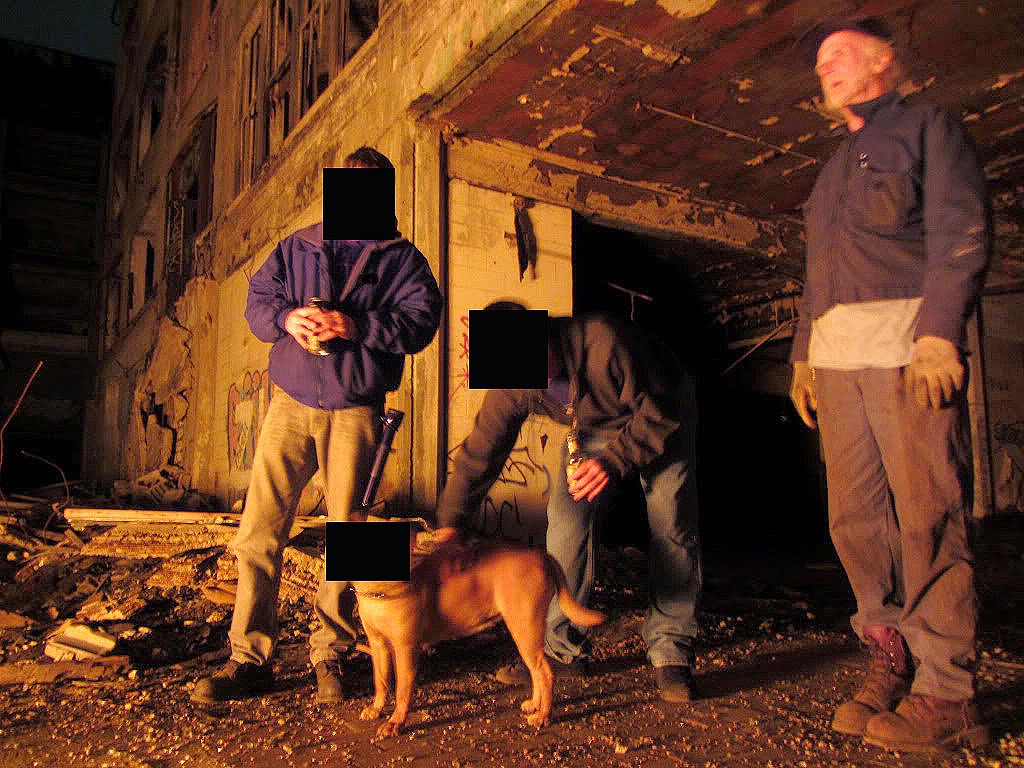 He's been featured in the media so many times now that I hardly think black-boxing his face is necessary. But just to be safe, I protected the identity of his pooch. 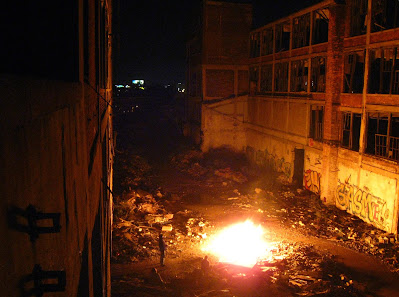 If only dear Mr. Bay or his Hollyweird lackeys knew of the simple enjoyment we were getting out of their garbage (which they apparently didn't feel they needed to clean up...hey, it's Detroit, right?).

While they attended million-dollar dinner parties and clinked champagne glasses with other high-brows out in Cali's balmy 70-degree winter nights, we guzzled cheap 40oz'ers and entertained ourselves by telling dirty jokes while huddling around flaming debris amid the gargantuan apocalyptic ruins of the factories where our grandparents built the American Middle Class—ruins that exist to the Hollyweirdos only as mere props in their fantasy movies. 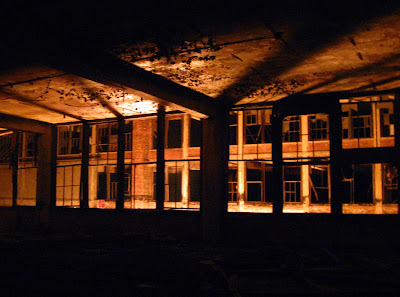 This was during the darkest days of Detroit, when everything seemed like it was finally coming apart at the seams and total anarchy appeared imminent. 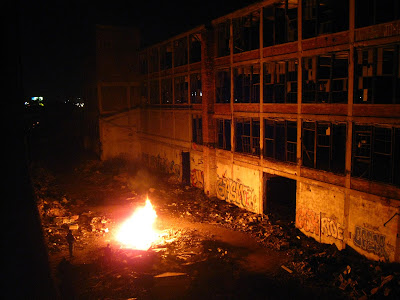 My last visit to the Packard Plant was long enough ago as to be past the statute of limitations at this point. I keep saying I will get around to doing a full writeup on the Packard, but I don't know when I will be able to tackle that monumental task.