I had now walked over three and a half miles; the southern tip of the peninsula was very near; I decided that any good spot along here that I found to potentially cross through the mushy areas would be fair game at this point. Assuming I did indeed have the courage to do so. I really and truly hoped that the warm spots were limited only to the shore here and did not continue out in the lake. From my lunch break spot as far up on shore as I could find a log to sit on, I was given a slightly elevated view over the ice ridge, and it had *looked* like that was possibly the case. 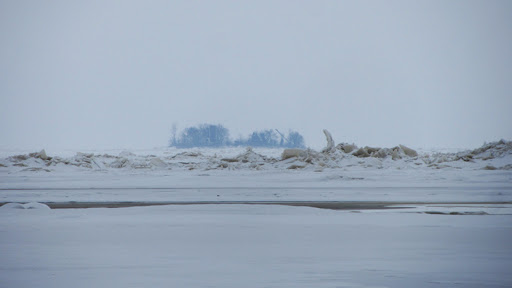 After my light lunch was concluded I continued walking south, keeping an even sharper lookout for any decent areas of crossing. The best I could find was about 10 or 20 feet between brown spots. I also needed to look for a place to stash whatever gear I was going to leave behind on land, such as my snowshoes. I also decided that I should have consumed exactly half of my water by the time I reach the island—if I reach the island.

A large sunken log in the middle of a cove looked like a good landmark from which to begin a trek away from land, and where I could leave my snowshoes. Hopefully no snowmobiler would steal them while I was away. 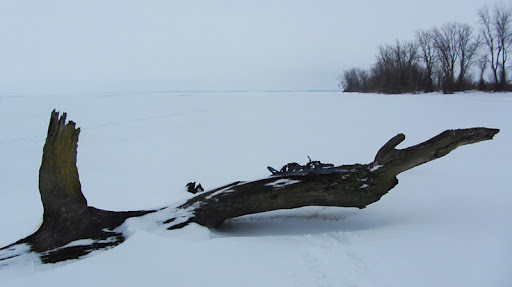 Was I really going to do this? I began taking them off my feet, and just thought to myself that I will take it step by step, and that there will be no assumption of continuing at any point. Progress will only be meted out by the approval of everything that I step on prior. Here was the gap that I chose to attempt my crossing: 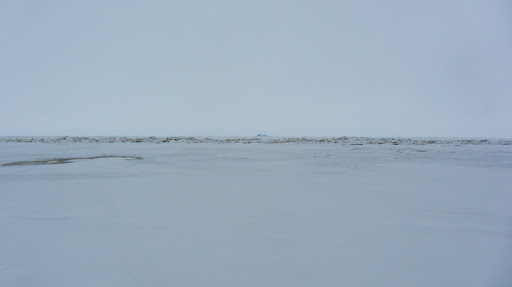 As you can see there were still a few brown spots in view. 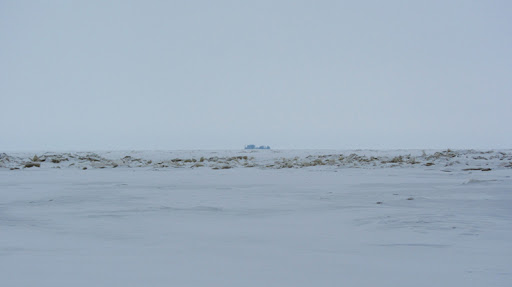 The water depth here is minimum three feet, and up to seven feet. So basically, anything past here and it won’t matter any more because it will be way over my head. Especially when it drops off to nine feet and more. 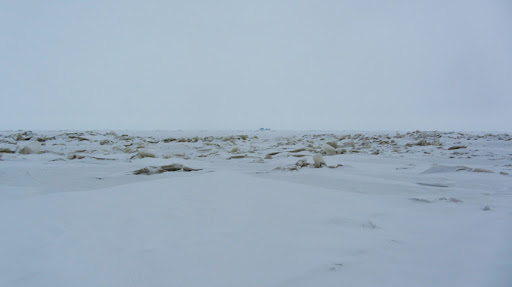 I took my ginger, incredibly nervous steps up to, and even past the gap between the scary brown spots, and neared the intimidating wall of grinding ice. I couldn’t believe I was doing this. I stopped every few seconds to listen for any disconcerting sounds, but heard nothing. I began going into the deep, spiritually contemplative mode my mind goes into when I do insane life-threatening shit like this. I looked to Father Dio and beseeched him for guidance and safe passage, and began putting one foot in front of the other.

Looking to the left, at Luna Pier, Michigan, four miles to the north: 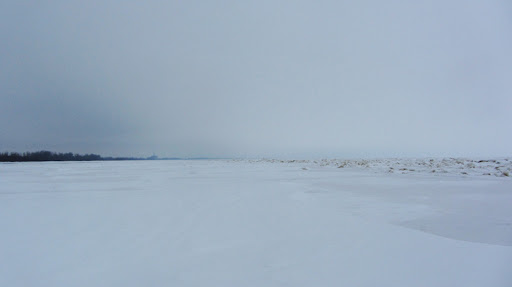 Looking to the right, toward Toledo, Ohio, four miles to the south: 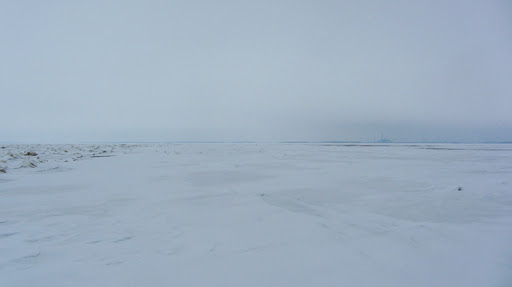 Was I mentally prepared? Was I physically prepared? Would Father Dio scream "Look Out!" if I ventured into danger? My nerves were absolutely tuned like a friggin piano...all sorts of thoughts and calculations and worries were running through my head, yet I remained clear and meditative. My sense of hearing was also heightened to the max, listening for any hint of movement in the ice.

I was now entering the very edge of the fractured area: 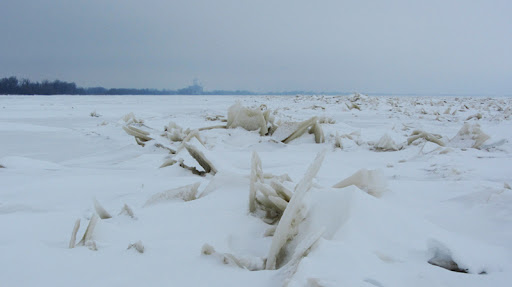 I could see beyond it now, and it looked better than what I had just crossed. Assuming that the fractured areas were not actually weaker than the flat areas. I kept telling myself in my mind that the reason the upturned plates are broken up is because they were thinner, and broke when the ice was still forming, and that the existing ice surface is now by necessity thicker than any of those broken edges that were forced out. Furthermore, the areas that broke have refrozen much thicker than the flat areas, sort of like a weld between two pieces of metal. 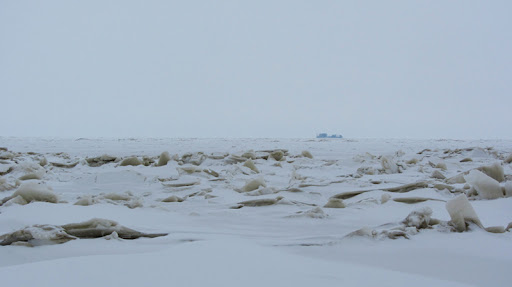 I also envisioned what would happen if I climbed up on one of the ridges and it did fail; theoretically that would be better than falling through a flat area. If I fell through a flat area it would be sudden and I would have no time to react, whereas if the chunky ridgeline failed under me, I would have a second while all the piled pieces began submerging again to scramble away to a safer spot. 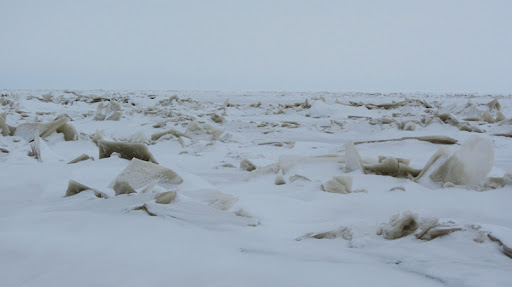 It was all about the mind games now, and keeping my thoughts from running away from me. It’s all about controlling your fear, and staying rational…even though you slip into a suspended disbelief state as part of the process. How you deal with ongoing danger as opposed to reacting to a single moment of sudden danger is what will determine survival. 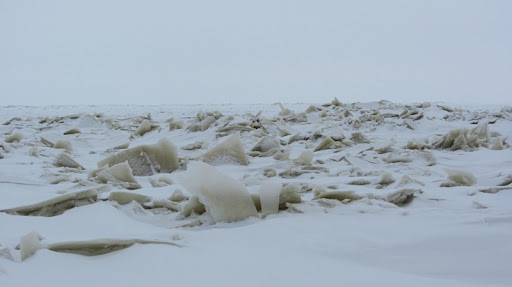 I really had to resist the temptation to take too many photos during this time, as it is easy to allow yourself to fall into the logical trap of “Nothing immediately dangerous is happening right now, so nothing dangerous must be about to happen.” There is also the tendency to seek refuge in the artificial reality that exists behind the camera lens; the situation doesn’t seem as scary when you can remove yourself from it by looking at it on a viewfinder. 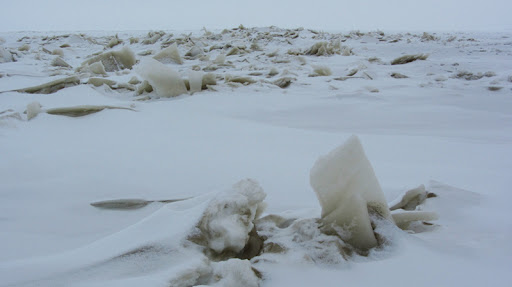 As you can see however I took the opportunity to snap several pretty pictures of ice whenever I stopped to listen for movement, or to keep myself from getting too rambunctious with moving ahead, as is the tendency when one feels chased or driven to escape a dangerous situation.

At this point running ahead would not propel me away from danger, but into more of it, though there was definitely going to be a “point of no return” where I would consciously decide which direction I would run if disaster struck—back toward land, or forward to the island. Though the island offered solid ground, it really only presented a more prolonged death from exposure or starvation, as there was a very good chance that I would get no cell signal there. My phone was currently already wavering at two bars. 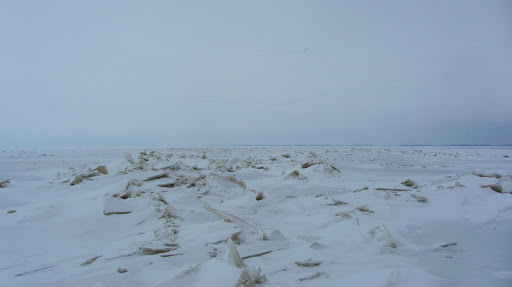 At long last I reached the end of the broken ice field: 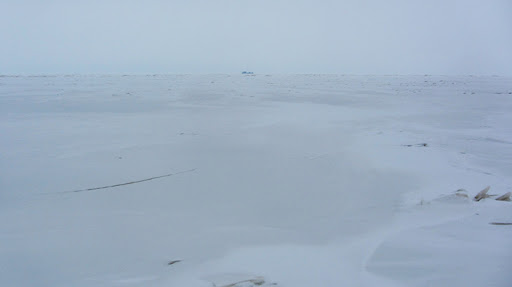 The island looked so far away still…I wasn’t even halfway yet. 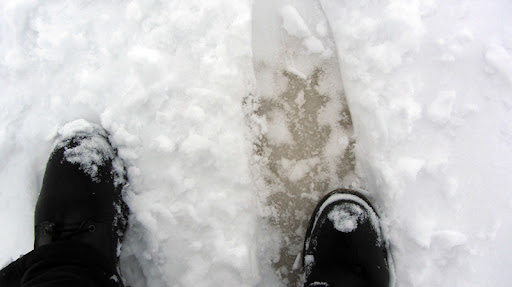 Another thing I did often was drag my feet across a section of the ice to expose the surface beneath the snow and inspect the quality of what I was walking on. A lot of it was fairly clear, which made me feel confident that it had formed soundly and was strong.

I looked back at where I had come from, and guessed that I must be about 1/3 of the way across: 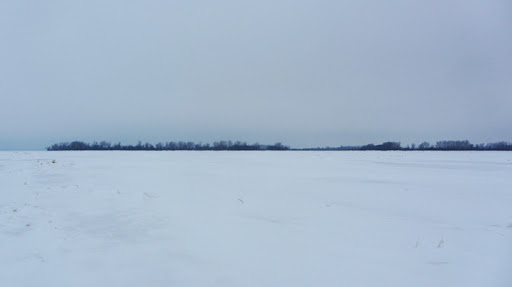 I guess I was actually doing this then…it wasn’t just a “go look and see” thing anymore…I was out on the lake for real. I didn’t let the magnitude of the situation panic me, but it was hard not to think to myself “Oh wow, okay, I’m just walking along in the middle of one of the Great Lakes, and that’s f#$%ing beyond insane and I definitely should not be doing that.”

I kept envisioning hearing this deep rumbling sound and feeling a shockwave pass under me as Erie decided to wake up from her brief nap, then seeing the shapes of the broken shards begin to move in divergent directions, opening up gaping chasms of supercooled water alive with giant tumbling ice cubes waiting to dunk me under and grind me to a pulp. On the other hand the vast silent ice desert also gave a strange sense of security, almost like I was on solid ground because there was no give to it whatsoever.

These newly heaved-up spots didn’t fill me with much confidence however: 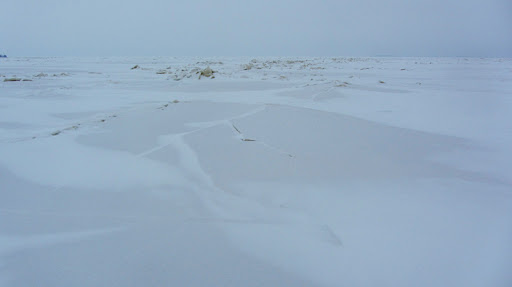 Turtle Island was beginning to actually seem a little closer, as opposed to some far-off hypothetical place that existed only in my plans, and in pictures I had seen online. It was starting to shed its ethereal phantom appearance and take a more solid form: 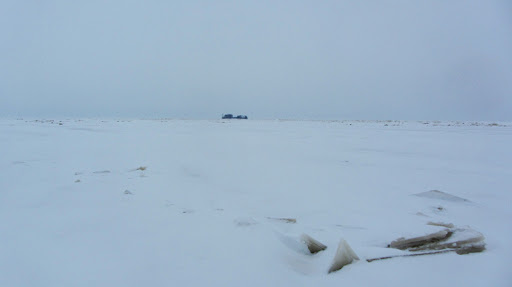 I was now about halfway, and I could see that ahead was another field of splintered blades of ice to cross. This was beginning to feel like the chapter in the Silmarillion about the Flight of the Noldor, and the hardship of the Grinding Ice, the Helcaraxë. I had left land at 12:07pm, and it was now passing 12:45pm according to the time stamps on my pictures. 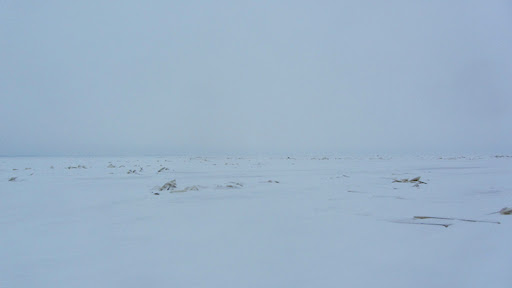 I had been walking for 40 minutes straight, and was only halfway. I was starting to get tired and my legs a bit sore, so even though I was now feeling the urgency to press on and get back to land as soon as possible, I didn’t want to fatigue myself too much. I needed to pace myself and avoid fatigue at all costs; I took more sips from my water, and ate a few of the small chocolates I had brought for energy. 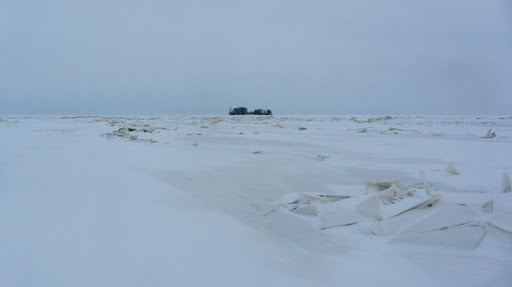 This greatly helped, and I could soon tell as the island’s shape loomed nearer and in ever-sharper definition that it was looking like I would really get there, and that gave me a boost in confidence as well. However, this was not an “eyes on the prize” situation; one does not want to get fixated on achieving the goal in order to stay motivated, one must be entirely concerned with the immediate surroundings, and signs of changing conditions.

Unlike previous missions, this wasn’t about “winning,” or accomplishing the objective at all costs; this was about staying alive. If I fuck up here, I don’t get a trespassing ticket…I get a casket-less funeral on a beach in the spring. I had to stay focused, and not allow myself to be tempted to forge ahead recklessly. I had to resolve myself that no matter how close to victory I got, I might have to stop and give it all up at a moment’s notice to retreat to safety if necessary. Even if it meant coming within one inch of the island and giving up. This reminded me so much of the equally harrowing trek to Flowers Island, Newfoundland, made by my colleague Navi in 2009.

As I was chewing the chocolate, I noticed that instead of melting into a liquid in my mouth like usual, it was merely being chopped into semi-molten globs by my teeth; a sure sign that my core body temperature had lowered. I was still quite comfortable however, and if I began to feel cold I could zip up my spacesuit and put on the extra items in my backpack that were currently dead weight. The island was now in full view…I was so close: 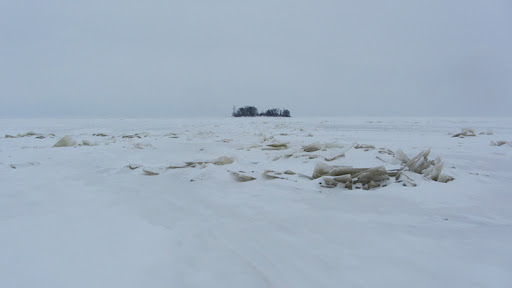 Luna Pier however had faded almost out of existence, now a mere blip on the horizon: 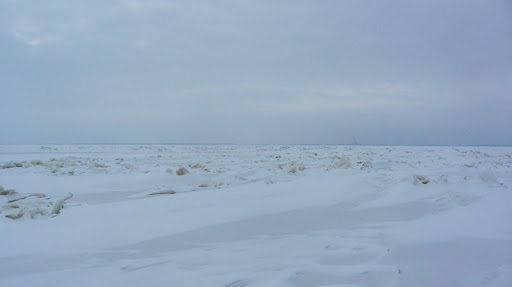 The ghost of the Toledo Harbor Light appears to the left of the island in this zoomed-in view: 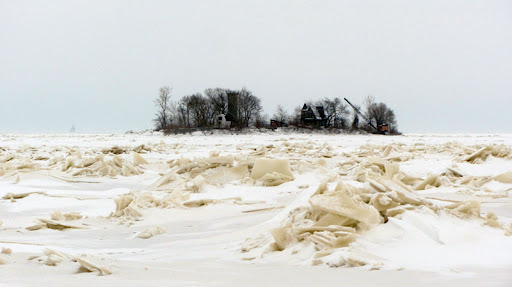 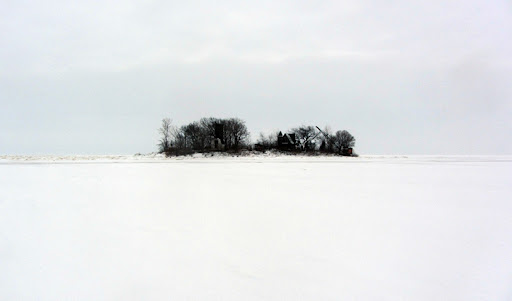 By this point I was almost ready to break out into a run; solid land never looked so good. 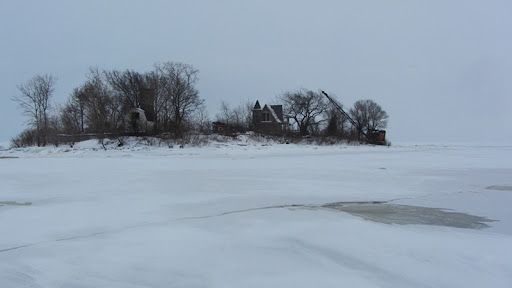 I knew that the island was ringed by shallow four-foot shoals, and somehow that made me feel better about the fact that there was also some piss-poor-looking ice there: 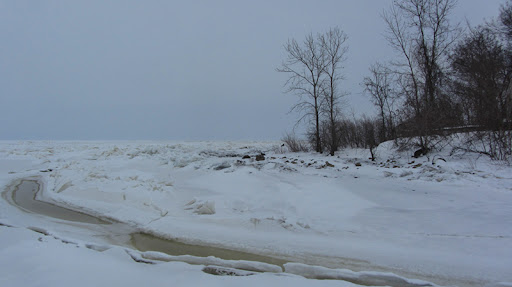 I was within reach.