Son of the Evening Star, Osseo!

According to the Michigan County Atlas by David M. Brown, Hillsdale County was set off from Lenawee County in 1829 (which at the time embraced all of southwestern  Michigan) and was organized in 1835. It is the southernmost point of Michigan, and is the source of five major Michigan rivers (the St. Joseph, Grand, Kalamazoo, Raisin, and Maumee), and is named for its hilly topography. Two major Indian trails intersected here as well: the Maumee Trail, and the ancient Great Sauk Trail, which of course became the eventual roadbed for the Old Chicago Road, now US-12.

Along US-12 in Hillsdale County, one can view these ruins in the village of Somerset Center: 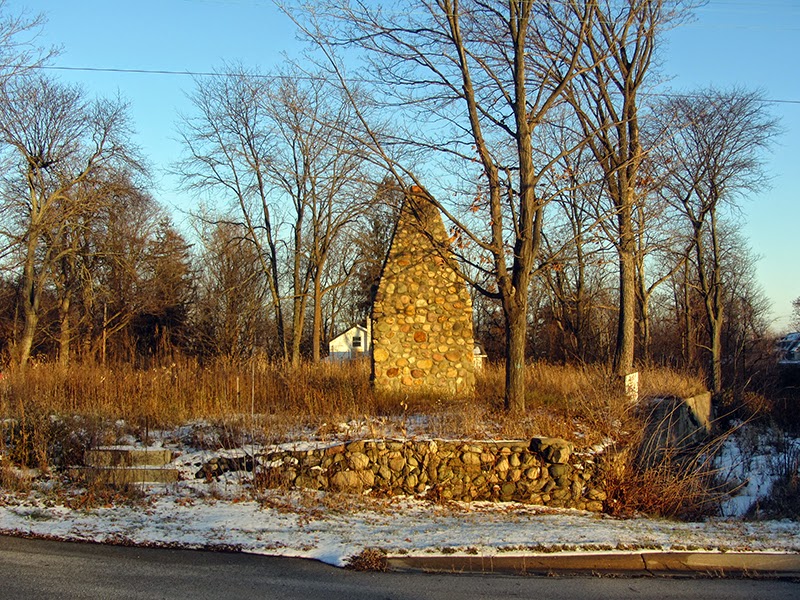 Brown says that Somerset Township was named after a place in Niagara County, New York. The first settler was James Hoevenburg in 1832.

What these cobblestone remnants belong to I do not know, but I doubt they are quite that old. They sit near a river, and parts of the foundation appear to suggest a mill operation of some sort: 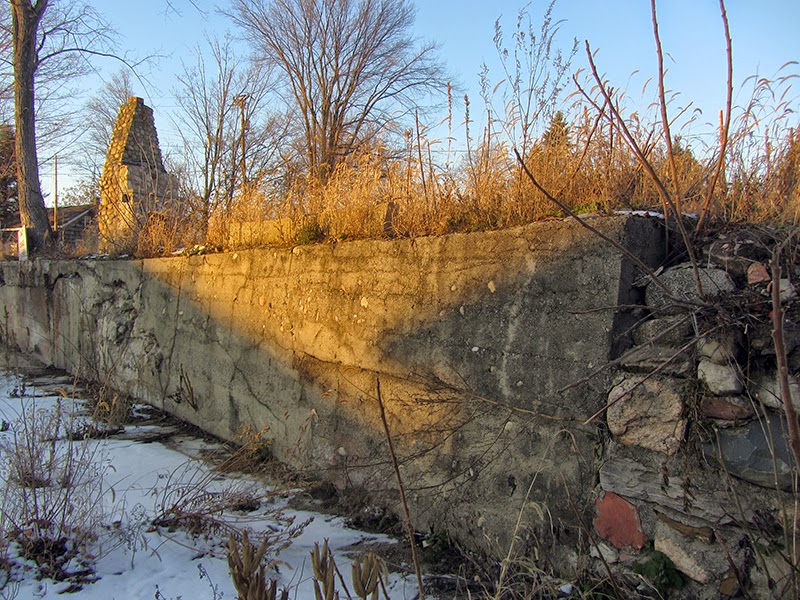 This old military road, the Chicago Pike (known as Michigan Avenue in these parts), was surveyed in 1825, and was the only passable road anywhere in the southern Michigan Territory for a long time. Eventually the railroad extended out along the same basic path, opening up a real trade route for the first time, which would facilitate commercial farming in southern Michigan by linking to ports in Detroit, Monroe, Toledo, and Chicago. With that, farmers could much more easily get their crops to market, and Michigan began to have a real economy. 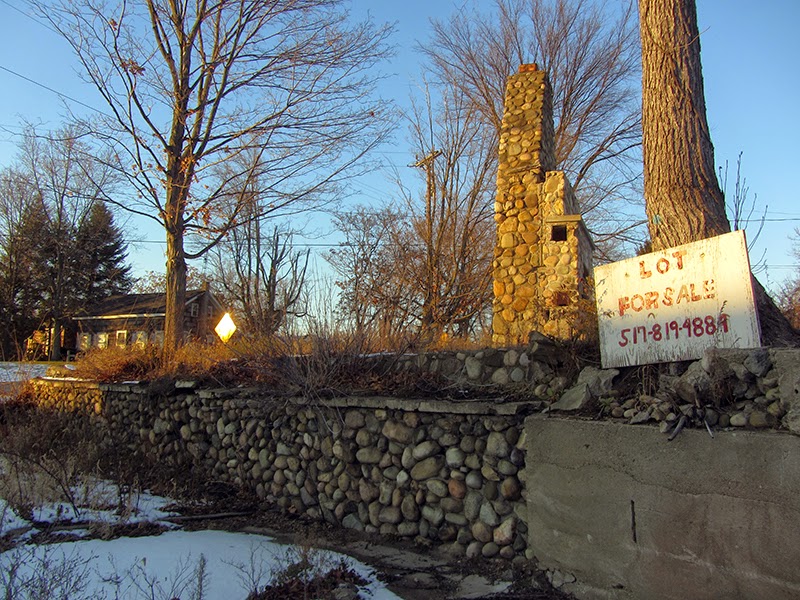 The Old Chicago Road remained a heavily traveled route for a century, gradually receiving improvements over time, and as such many stagecoach stops and farming hamlets sprung up along its winding route as it dove in and out of the pastoral hills and dales of southern Michigan. The fact that it is a very old route shows in the architecture of the buildings that are found along it, as well as in the girth of the mighty ancestral oaks and maples that often line its shoulders. 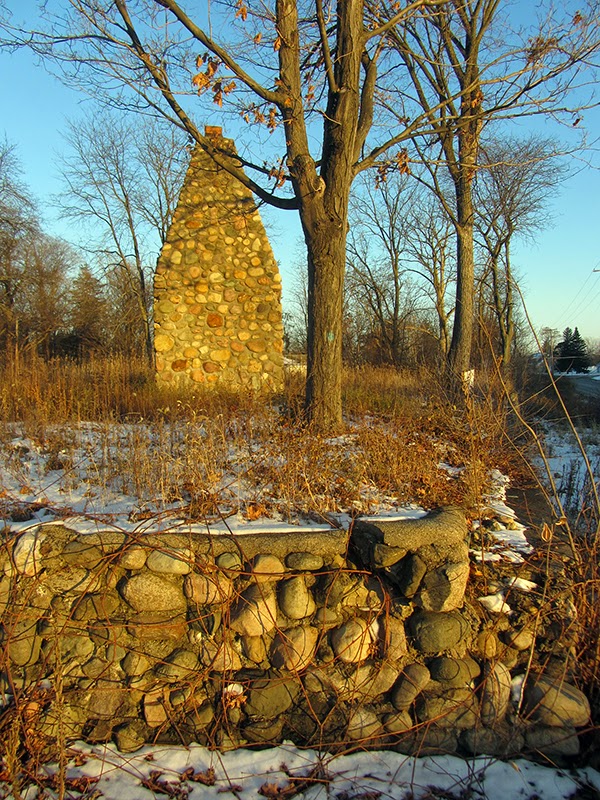 After World War II the first Interstate Highway, I-94, was being built basically parallel to it. When it was complete it connected Detroit to Chicago, making this route the longest continually used pathway in North America; the Great Sauk Trail started as a migratory route for nomadic hunter-gatherers 11,000 years ago when the glaciers melted, and it has remained crucial ever since. 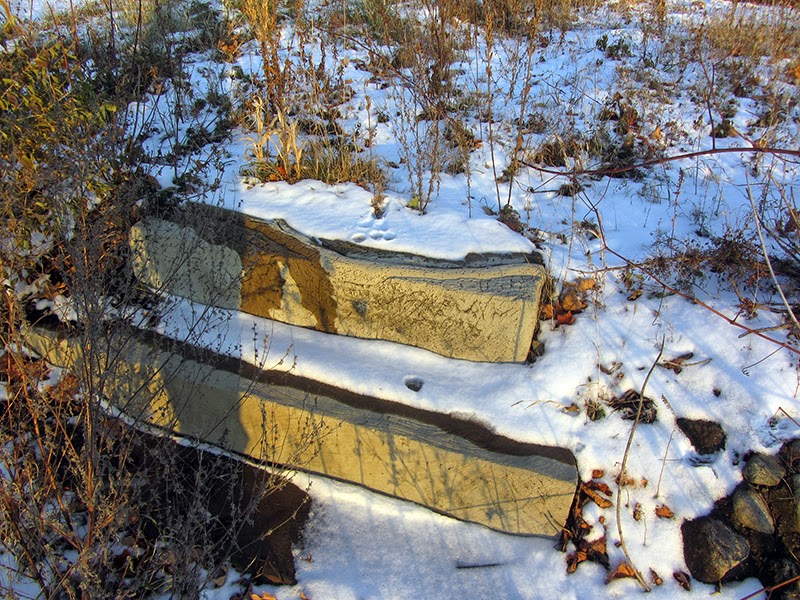 It was the existence of that old military road from Detroit to Chicago, and the coming of the railroad that helped put Hillsdale County on the map. 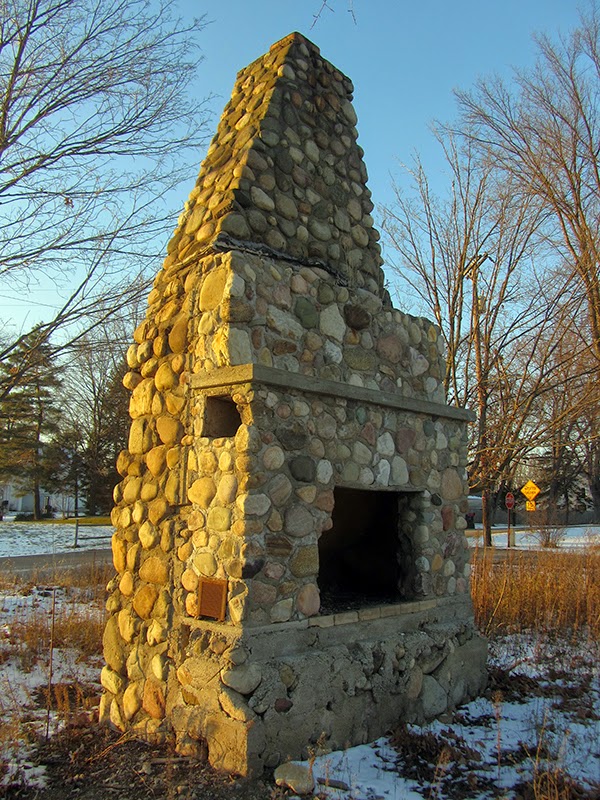 In Ghost Towns of Michigan, author Larry Wakefield explains that there was a bit of a kerfuffle over where Hillsdale's county seat should be. In 1828 Beniah Jones decided to found Jonesville, the first village in Michigan to be settled west of Tecumseh. By 1835 it was thriving, and became the Hillsdale County seat. Two Jonesville merchants decided to move a few miles south and start another town, called "Hillsdale," which they felt ought to make a better county seat:

Unfortunately my prime target there, the mammoth F.W. Stock & Sons Flour Mill was not accessible:

Jonesville's town fathers saw this as a threat to their prosperity, and vowed to "fight a war" to keep Jonesville as the seat (which almost sounds as if certain folks may have still been riled up from the Toledo War). Using some "tortured logic" as Wakefield puts it, they came up with the idea to found yet another town next to Hillsdale and promote it as another contender for the county seat, so that it would weaken Hillsdale's bid for the honor, and in the eyes of state officials Jonesville would remain the best choice. This new village was to be Osseo.

Osseo was where I found the ruins of this old Lake Shore & Michigan Southern Railroad viaduct:

Much to Jonesville's chagrin, state politicians in Lansing must have seen through this charade and called their bluff in 1840 by selecting neither Jonesville nor Hillsdale as the seat of government, but the prop town of Osseo.

Much to the delight of those who had opted to settle in Osseo their town began to flourish, though no courthouse was ever built there.

By 1843 however the state reversed its decision and made Hillsdale the permanent county seat. Osseo's early optimism began to fade thereafter, but it has never really gone away, nor lost its identity in Hillsdale's growing shadow.

In 1843 the Lake Shore & Michigan Southern Railroad also finally reached Hillsdale from Adrian, and the line passed directly next to Osseo, which helped it prosper from 1873 to about 1920, according to Michigan Shadow Towns, by Gene Scott. It was the westernmost branch of the first railroad built west of the Alleghenies. Which I guess made Hillsdale the last stop before the Wild, Wild Western frontier.

The local clay helped a brick-making operation remain successful until about 1910. Milling and agriculture also prospered, as well as a concern that manufactured battery boxes for Ford Model-Ts, and the town was a stop for six trains a day on both freight, and passenger lines. The town withered during the Great Depression, and never fully recovered. The railroad depot remained open until the early 1960s, at which time the village still had about 500 residents.

Osseo naturally suffered further decline when this branch of the railroad was abandoned, and the nearby state highways were improved for higher speeds. This viaduct used to go over Blackbridge Road (which now skirts around it), and is thus named the "Black Bridge" I guess. Gene Scott says that these stone piers date to the 1860s.

The abandoned Lake Shore & Michigan Southern's railbed is now part of the Baw Beese Rail Trail, part of the North Country Trail system as it winds through the nearby Lost Nation State Game Area. Baw Beese was the name of a local Potawatomi chief.

Though Osseo no longer has a village government and has reverted to township control, it still has its post office, which has been open since the start of the Civil War. Today most of Osseo's residents are elderly.

Scott goes on to say that originally, this settlement's name was "Florida," but it was changed to "Osseo" in 1850, after a character from Henry Wadsworth Longfellow's Song of Hiawatha, a Potawatomi chief whose name meant "fiery plumes."

The translation he says refers to the seasonal burning of excess fields of wheat by the Indians, a form of "wetland management" that they still seem to do to this day with phragmites on Walpole Island.

And he said in haste: "Behold it!
See the sacred Star of Evening!

You shall hear a tale of wonder,
Hear the story of Osseo!
Son of the Evening Star, Osseo!"

On a later trip back to Hillsdale County, I decided to visit Michigan's southermost point, which also happens to be where Ohio, Indiana, and Michigan touch. It lies well off the beaten path.

Michigan has a southernmost point because of two different border disputes, one with Indiana (which is still ongoing), and one with Ohio, which led to the "Toledo War" and will be discussed in detail in an upcoming post. As originally laid out by the Northwest Ordnance in the 1700s, Michigan's southern border was to have extended in a line due eastward from the bottom tip of Lake Michigan, to the mouth of the Maumee River (Toledo). 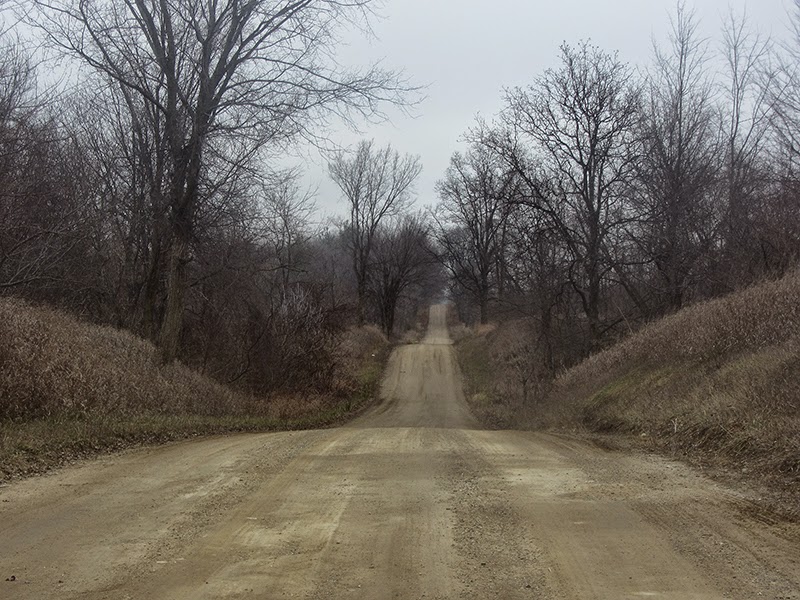 Since early maps were crude, nobody yet realized that a due-east line could not in fact be drawn between the bottom of Lake Michigan and the mouth of the Maumee; it would have angled northeasterly. In the resulting kerfuffles with Ohio and Indiana, both states have taken unequal chunks out of what would have been Michigan's southern borderlands, resulting in this strange corner at the bottom of Hillsdale County. Naturally, such a geographical quirk I simply had to visit. 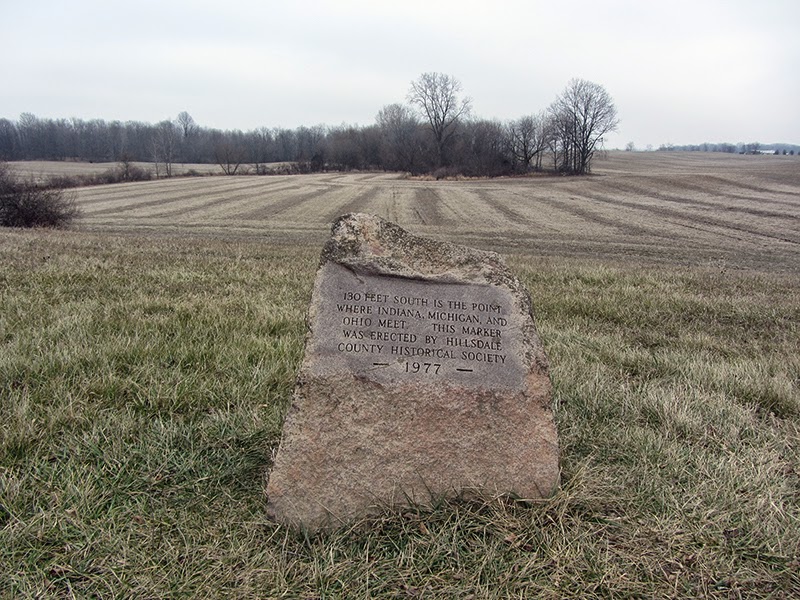 Looking south, the three state lines intersect where the road turns from dirt to pavement: 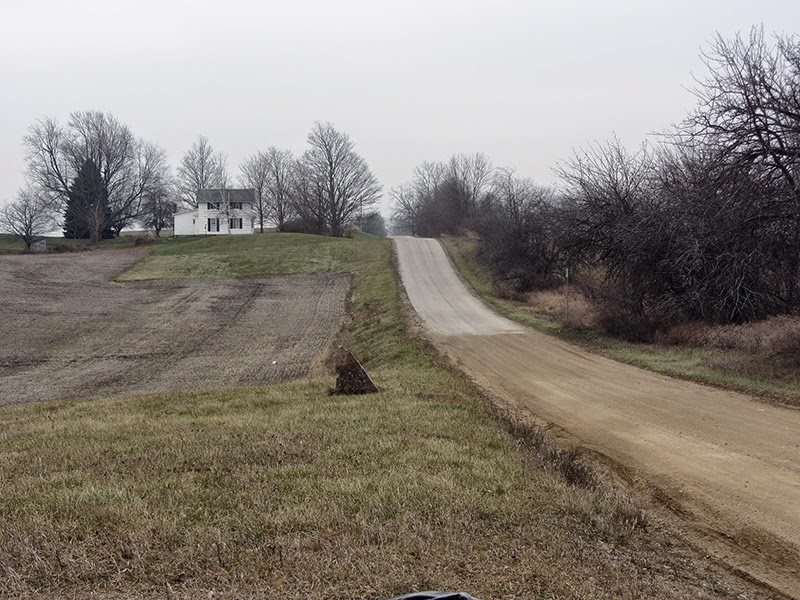 Here is a visual breakdown: 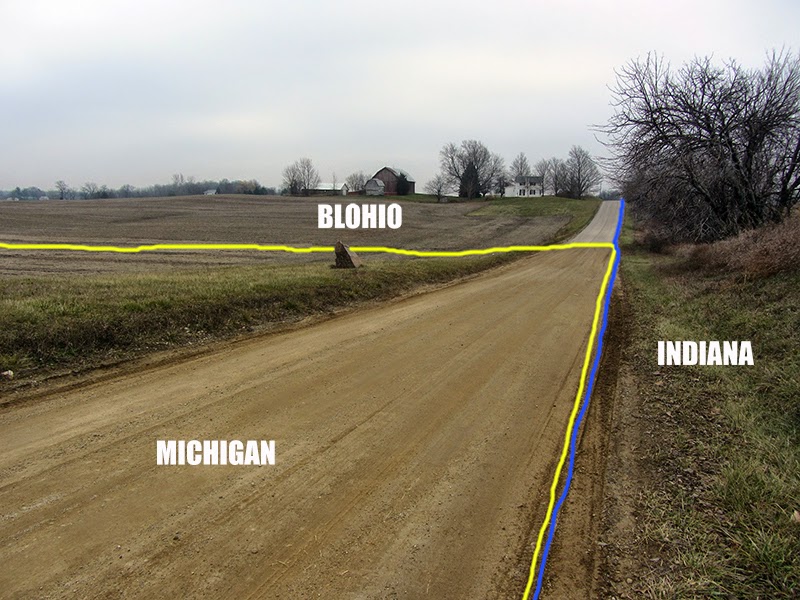 Now I could say that I had been to the southernmost point of Michigan. In order to get from here to Michigan's northernmost point, you would have to drive 11 hours to Copper Harbor, then take a three-hour boat ride to Isle Royale, then another one-hour boat ride to Passage Island, and hike another hour or so. Altogether it would be a journey of over 700 miles.