The next morning Rutabaga had to head up to the lonely village of Betsy, an old village that was very, very insular and almost all of the people there were directly descended from the original fishermen who had founded the village long ago. Sounded vaguely Newfoundlandian.

While we were out this way we could also go see a certain beach that she really liked, which I have nicknamed “Baconstone Beach,” and after that I would finally get a second chance to check out the vast stamp sands at Gay. 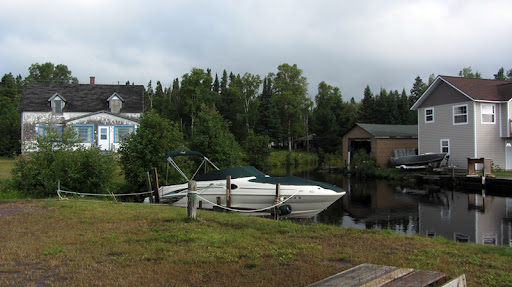 We arrived in the sleepy hamlet of Betsy after 0900. The sky was breaking up and it was yet to be determined whether the sun or the gloom would prevail today. A decrepit old wind vane swirled in the cold breeze coming off Lake Superior: 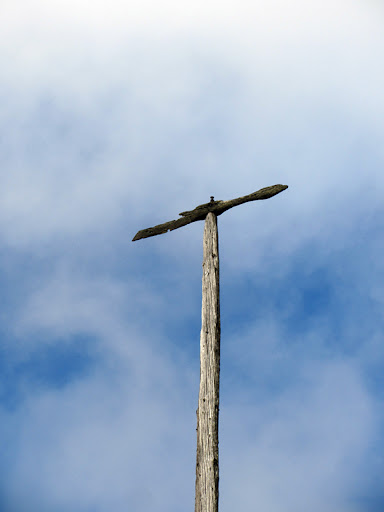 These were the shattered ruins of the old dock cribbing, which had long ago given in to the battering of the lake: 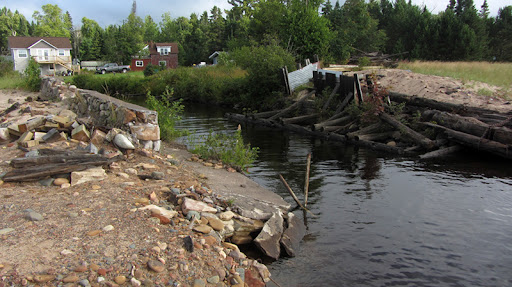 This place gave me that familiar Shadow Over Innsmouth creepy feeling… 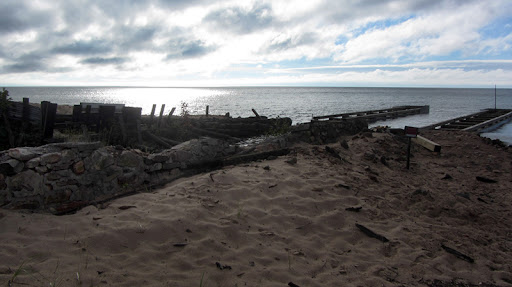 Our presence in this dead-silent ghost town was immediately noticed, and a tall man strode out of his house nearby to meet us. He had a strange, laboriously slow way of speaking—seemingly even slower than the usual Yooper drawl—and a faint, unnerving half-smile that never quite seemed to leave his face as he stared distantly into whomever he was speaking to. 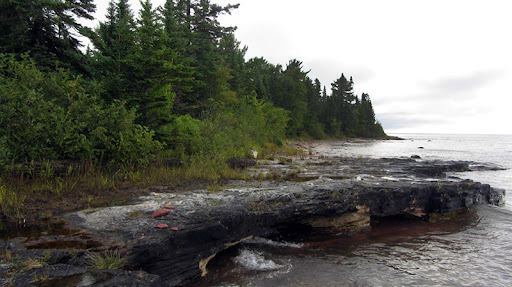 After our business here was concluded, we departed this mildly unsettling place and soon arrived at “Baconstone Beach” (actually Brunette Park). 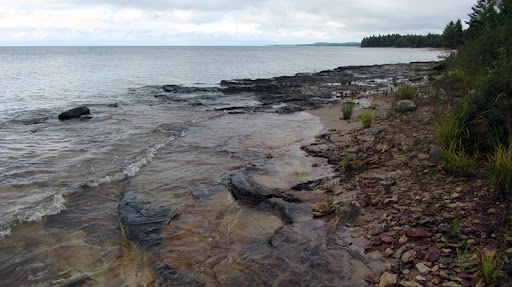 It is comprised of an outcropping of Jacobsville Sandstone that has been “marbled,” if you will, in such a way as to make it appear like raw bacon: 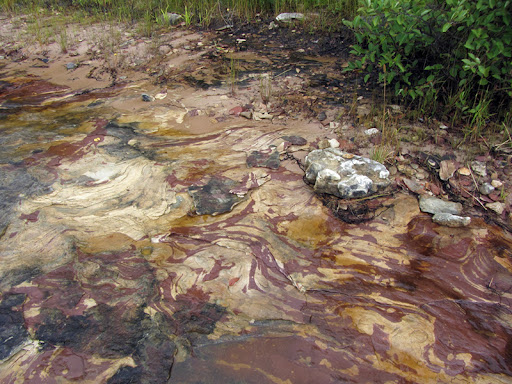 The Wayne County Building was originally slated to have been built out of Portage Entry Red Jacobsville Sandstone very similar to this stuff, but political boondogglery put the kibosh to that. 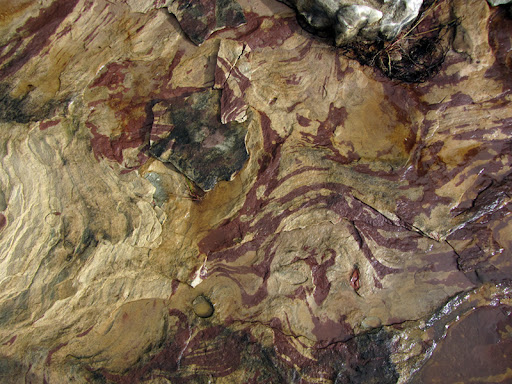 As we continued back down the eastern side of the peninsula, we came to the mouth of the Tobacco River, which is one of Rutabaga’s favorite spots, so we stopped because there was also a nice little waterfall there. 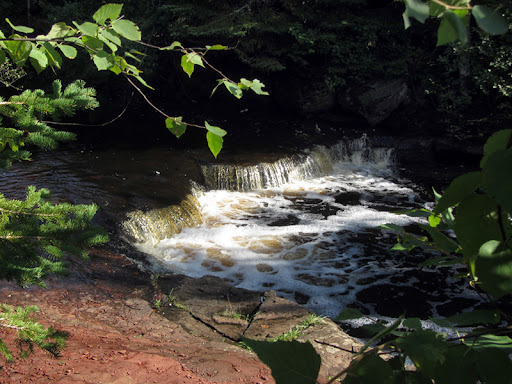 Underneath the current roadway over the river, I could see that the original foundations of the bridge—or at least an attempt at staving off erosion of the piers—looked to be of sandstone: 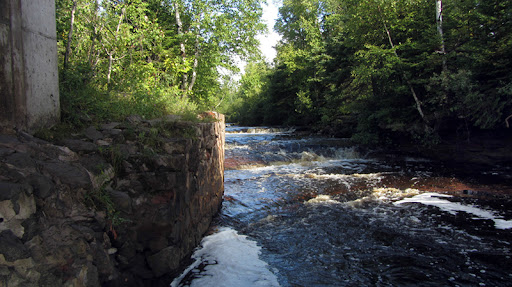 Here’s a VIDEO of the same spot, during the spring thaw…so maybe erosion is a bit of an issue there, heh.

There were a couple waterfalls here actually, so we walked upriver a ways. 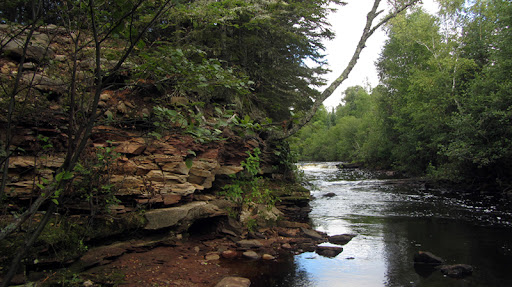 After we had gone about 50 yards, I realized that hey—there’s ruins here… 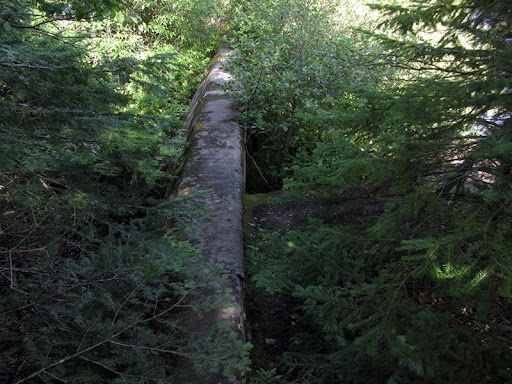 Was this was some kind of dam or flume? 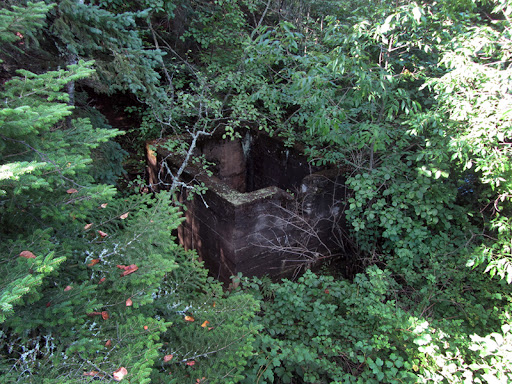 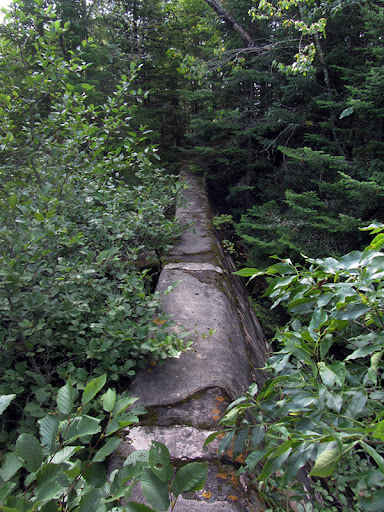 On top of the reservoir wall I saw another inscription—some of which had been filled in with moss—dated to 1906: 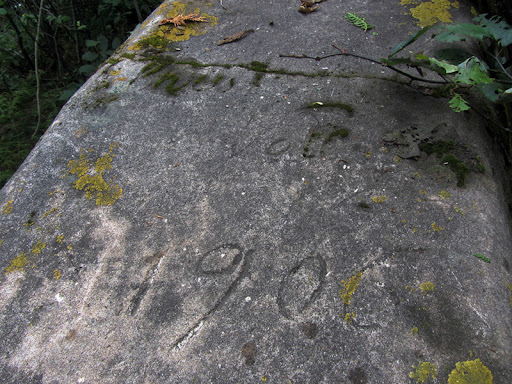 Apparently that must’ve been a popular year for carving things.

There was this opening in the wall, near where I could tell someone’s house was (I could begin to see it through the trees): 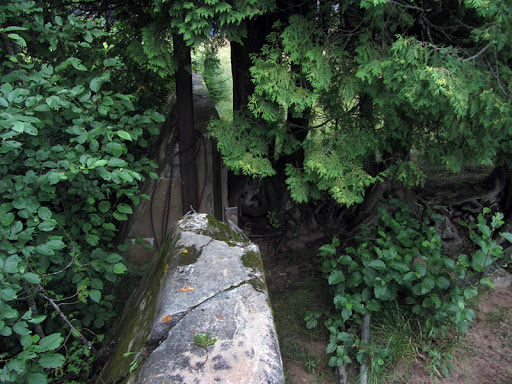 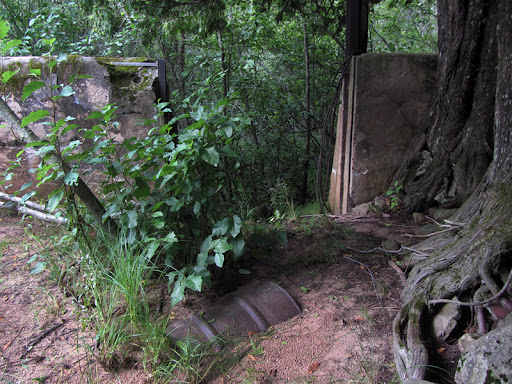 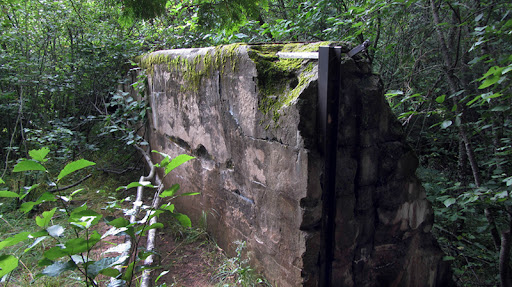 I jumped down into the dense thicket to investigate the square building. It offered no further clues, but was near a curious rock shelf: 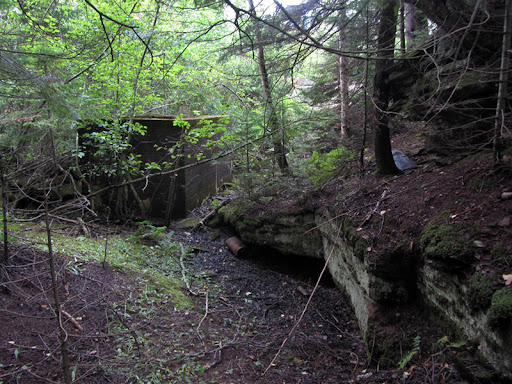 Nothing else was to be found back here, so we went back to the road. Back near the car, a somewhat preserved smokestack foundation to what looked to be a very old stamp mill: 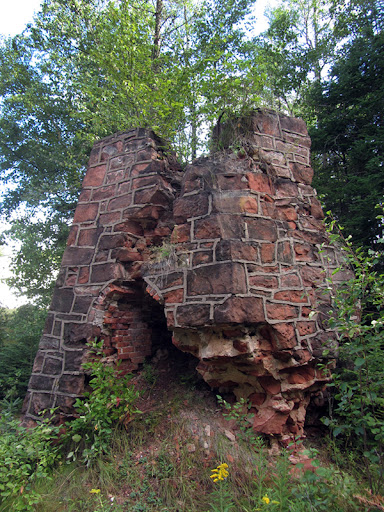 It clearly had seen some mortar repair in recent years, being that it is something of a roadside landmark. 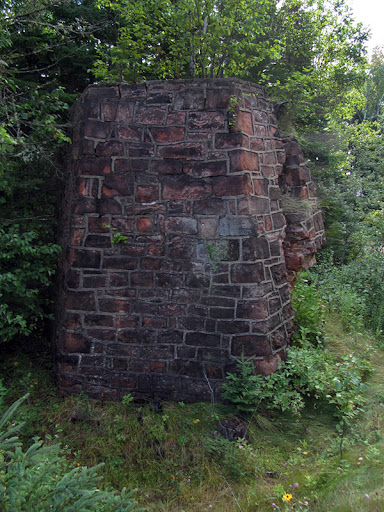 Again, I head-butted my way into the adjoining thicket to see what other ruins might be attached to it, but surprisingly found very little. 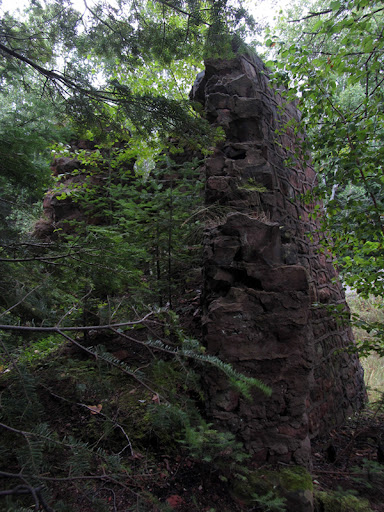 I was left rather perplexed by this seeming incongruity, since that stone ruin most definitely was a smokestack ruin, exactly like what you’d expect to find at any stamp mill in Copper Country. Problem was, it bore no other features necessary to a stamp mill, such as a rail spur, stamp sand, or large foundation ruin.

When I emerged from the thicket Rutabaga asked me if I found anything out, and I didn’t really have much of an answer. We continued driving toward Gay, while I tried to rack my brain thinking of what mine company would have had a mill operation here. I knew of no mines in the immediate area. 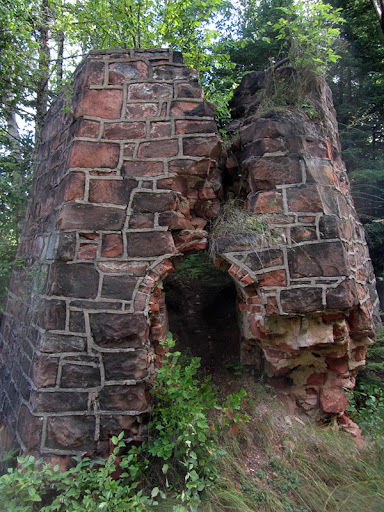 In fact there aren’t any, and this wasn’t a stamp mill ruin. I eventually learned that this was in fact the water intake and pumping station for the large Mohawk and Wolverine stamp mills, at least a half mile away! But I didn’t feel too bad, since Mike Forgrave had fallen into the same assumptions during his own investigation, heh.