The old pearly-white palace behind the Temple Bar was a place that I had always admired for its incredibly gaudy architecture, but was never quite sure if it was still occupied or not. The day I noticed it suddenly sporting plywood over all the lower windows, I had my answer. After we first got into it we began referring to it as the "Crazy Handyman Apartments" because it was simultaneously in a horrid state of collapse and an amazing display of improvisational repair by the building's former maintenance person.

There were lots of fascinating jerry-rigs going on in there, and a lot of interesting little notes to the tenants and users of the building on what was broken and how to circumvent the issue according to how it had been patched back together. Rifling through papers in the office told us that the address of the place was 112 Temple, so that became the default name until finally learning that the original name was "The Alhambra."

The only internet resource I could find regarding build date and architect (which has apparently been copy-pasted in many other places) has it listed as the Alhambra Flats, built in 1895. That source purports to quote National Register of Historic Places "documentation," though I have been unsuccessful in locating a full copy of the Cass Park Historic District report, since it had not even been digitized yet while I was composing this post, according to the NPS website.

In lieu of tracking down a paper copy of NRHP listing #04001580, please allow me to simply paraphrase this Pinehurst guy for the moment. The snazzy six-story building was originally divided up into 24 units, was designed in the Romanesque Revival style, and gives credit to John R. Gentle as architect, though I have also read that it was designed by William S. Joy (who designed the Charlevoix Building).

Interestingly, one of the Alhambra's first occupants was Harvey S. Firestone, who as you might have guessed founded the Firestone Tire Company.

According to The Detroit Free Press Detroit Almanac (which does repose on my shelf in paper form), the Alhambra "wasn't comparable to today's Cass Corridor apartment buildings;" it was "a swank address" along one of the city's "silk-stocking streets." I guess that's a polite-ish way of saying the rich people hadn't moved out yet. Anyway, on January 20th of 1905, forty families who lived in the Alhambra Apartments were allegedly poisoned by the "scrubwoman," Rose Barron, who was later arrested.

Rose was actually dying of cancer herself at the time, but she was out for revenge against her employers, who had recently demoted her from the position of cook, to that of scrubbing floors. She allegedly served up a tray of biscuits to the building's tenants, laced with arsenic, which resulted in at least two of them dying.

During the ensuing trial (which lasted 19 weeks), Barron's attorneys based her defense on the fact that bad plumbing was the source of the poison in the building. Despite the fact that it was brought forth in the trial that Barron's father-in-law had also happened to die of arsenic poisoning at some point in the past, the disgruntled servant was somehow acquitted.

A pair of twin light courts shed dingy, dungeon light to the bottom levels of this dour domain...

The main stairs in this building were all wood construction, and something catastrophic had occurred to seriously compromise their integrity at some point; there were several extremely treacherous passes such as this (and worse):

But hey--look how fancy the trim level of this old dame has remained!

On each floor was a connecting hallway running from front to back of the building between both light courts, with windows looking out on either side:

After a certain point (the fourth floor, if I recall correctly), the main stair just became completely impassable. Like there was a gaping chasm bashed into it by a falling radiator or some other such trauma. As a result we were forced to continue ascending using the quaint series of ladders and trap-doors that were built into every balcony on the south side of the building:

What's neat is that these balconies were in the common area of each floor.

The apartments mysteriously all shared the same almost-fully-intact Gilded Age fixtures that the building came with, as well as a lot of antique furniture...somehow this stuff was never gutted from the building!

According to UNESCO this building was named after a great ancient palace in Granada, Spain that was a famous Muslim stronghold and example of Moorish architecture. It influenced or was the setting of many literary and musical works, and a few films.

The International Order of Alhambra was founded in 1904 in New York, as a Catholic fraternal and social association. Like this apartment building, it was of course named after the Alhambra fortress as well, where the Moors surrendered to Ferdinand and Isabella in 1492, after occupying Spain for almost 800 years.

It was also within sight of the Alhambra’s red towers that "the saintly Columbus received the first favorable reply to his lifelong prayers for assistance to embark on his voyage of discovery." The Order of Alhambra was originally limited to only Knights of Columbus who had attained the Fourth Degree.

The emblem of the Order is the red tower of the castle, "surmounting the crescent of the Saracen typifying the triumph of Christianity over the Moors." The Order is specifically dedicated to the care and well-being of persons disabled by mental retardation.

I find it interesting that so many fraternal orders built headquarters in this area of the Cass Corridor...of course there is the towering Masonic Temple but also the Moose Lodge, Grand Army of the Republic, and the Knights of Pythias in the Hotel Fort Wayne. It's almost like it was a one-stop-shop for all your fraternal and mystical needs. And for those who just can't get enough mysticism in their lives, they can live in the Alhambra I guess.

For what it's worth, there was also another building in Detroit named after this Muslim landmark, the Alhambra Theater, at 9428 Woodward.

The Alhambra Apartments was listed at #8 on a list of "Thirteen Haunted, Creepy, or Spooky Detroit Places" in 2012. Why that is, I have no idea, since the building has never really been open for the general public to come look for Halloween thrills as far as I know, and moreover is quite hazardous currently. Unless Curbed is out to purposely entice random internet readers to commit trespassing, which surely no self-respecting website would ever do, of course...

In retrospect I can't believe these are the only photos I have, since this building truly was full of LOTS of STUFF...in fact there was so much stuff, it was difficult to take pictures of it all, or to decide what to shoot.

Perhaps that is why I only have photos of the empty, yet architecturally snazzy areas?

The views from this building are quite nice:

Here is a view that can't be replicated anymore...both the First Unitarian Church and Temple Hotel have been demolished, as well as the Brewster-Douglass Projects, and the Koenig Coal silos:

Another outstanding example of the plethora of antique furniture that reposes in practically every room of this old building:

The number of old wobbly chimneys on the roof spoke to the Alhambra's 1890s construction and likely fireplace-heated units.

Across the way, the Hotel Eddystone:

Looking down one of the building's light courts (they were actually covered by skylight windows, but I shot this picture through a broken pane):

A view down Temple Street, showing the heavily abbreviated cornice of the building:

Here you can see both skylights...also visible looming in the background is the Hotel Fort Wayne (American): 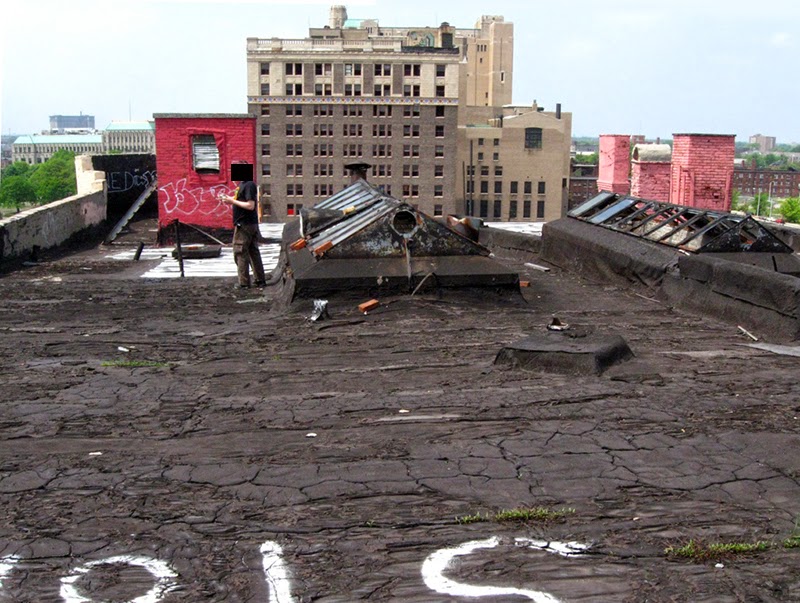 As of April 2016, the Alhambra was included within the protective boundaries of the new Cass Park Historic District.