This Present 'State' of Grace

You'd be amazed what the proper credentials, and a sternly, businesslike visage can achieve. In such a "state of grace," shall we say, much that is typically forbidden may be accessed. Read on... 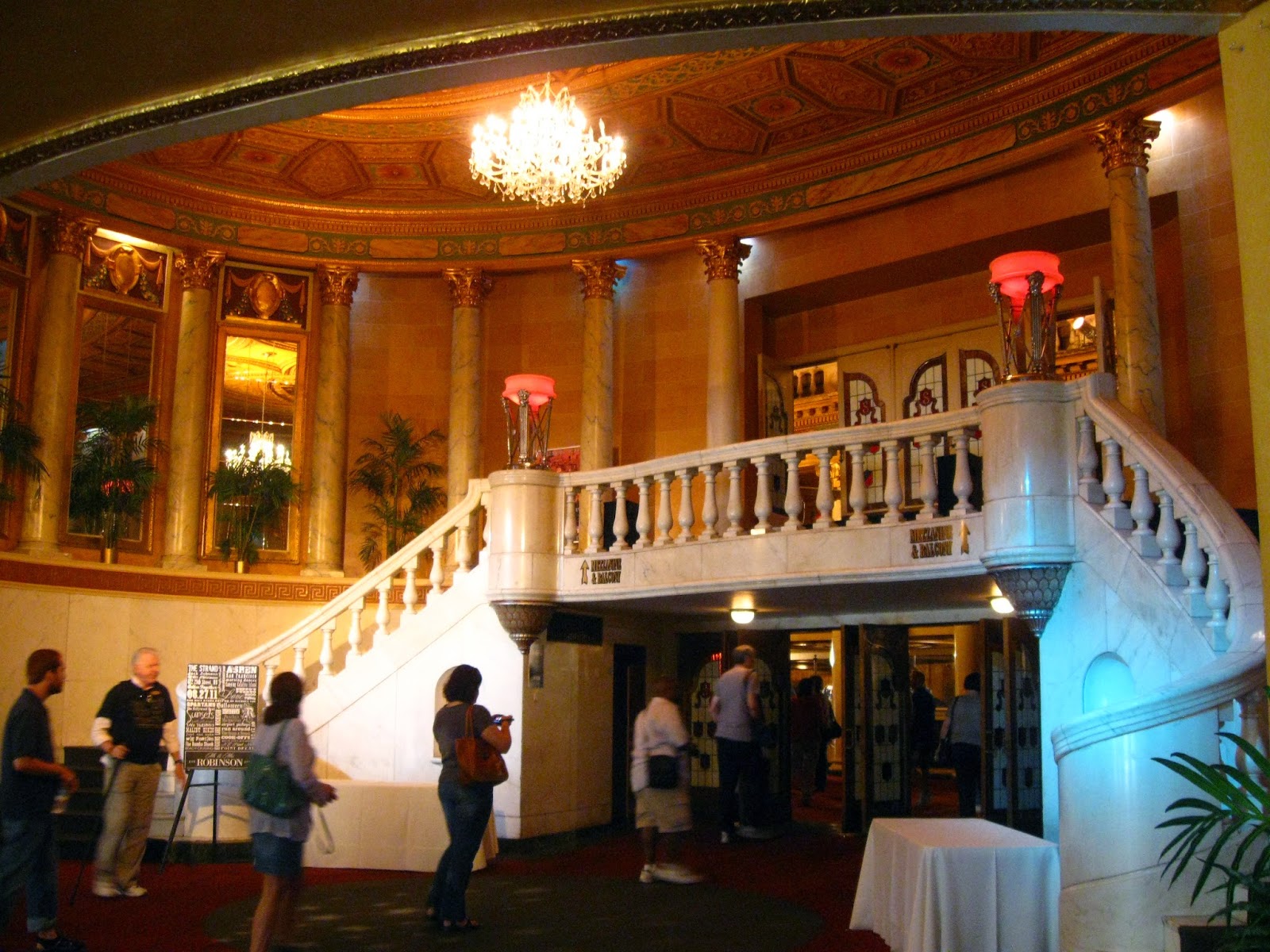 The State Theater is perhaps tied with the Masonic Temple for Detroit's second-most magnificent entertainment palace. This hall originally seated around 3,000 according to the Detroit Historical Society, and was named the Palms Theater when it was built in 1925. Of course it was recently renamed the Fillmore Theater, but for most of its life it was simply the State. 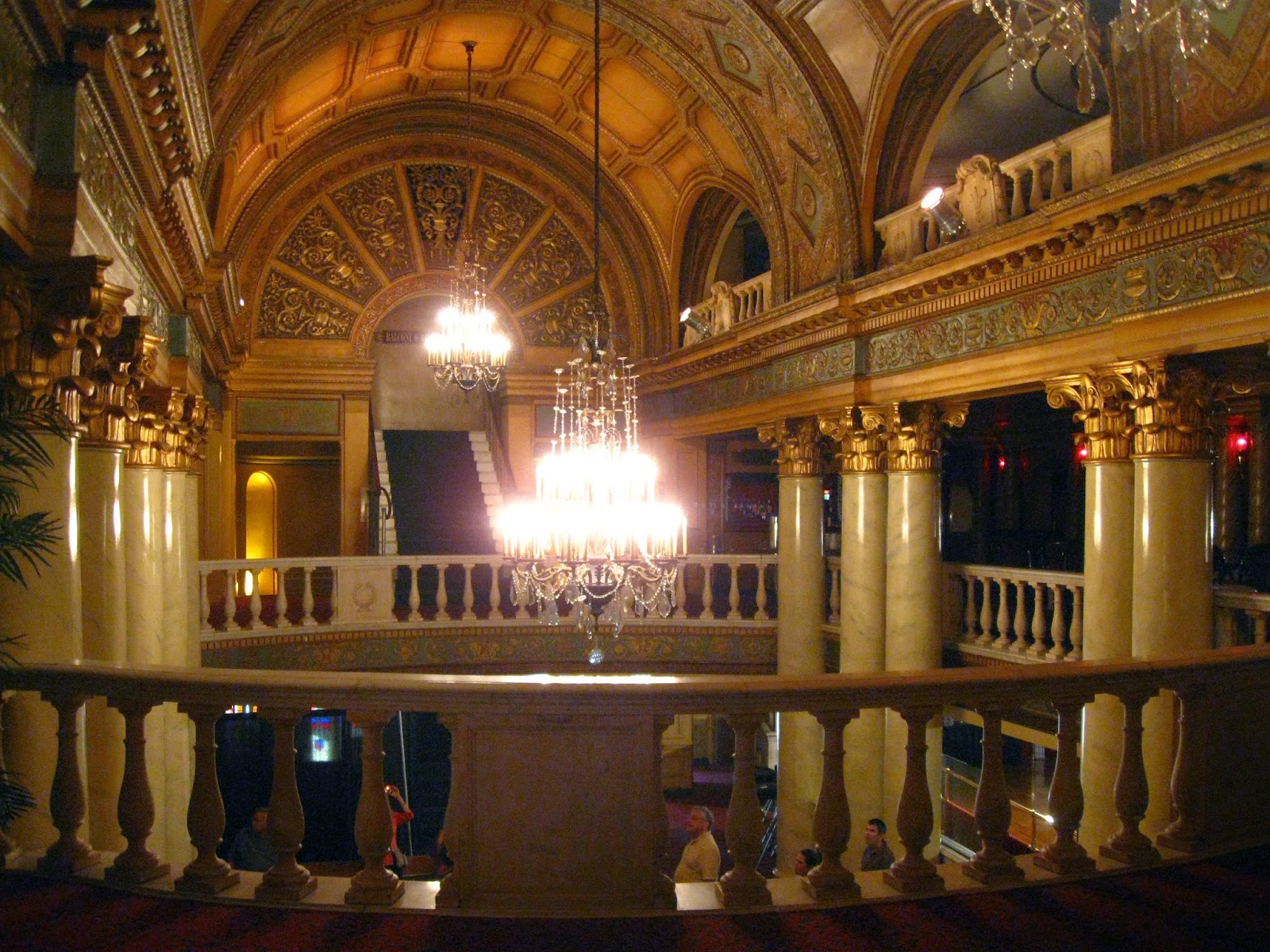 It was erected by the family of Francis Palms, on the site of the former Grand Circus Theater according to the book Detroit's Downtown Movie Palaces by Michael Hauser and Marianne Weldon. Francis Palms was a real estate mogul in the Midwest during the 1800s, and this theater was his family's tribute to him. John Kunsky operated the Palms with a 12-story office building attached, as was the style in the early days of cinema. 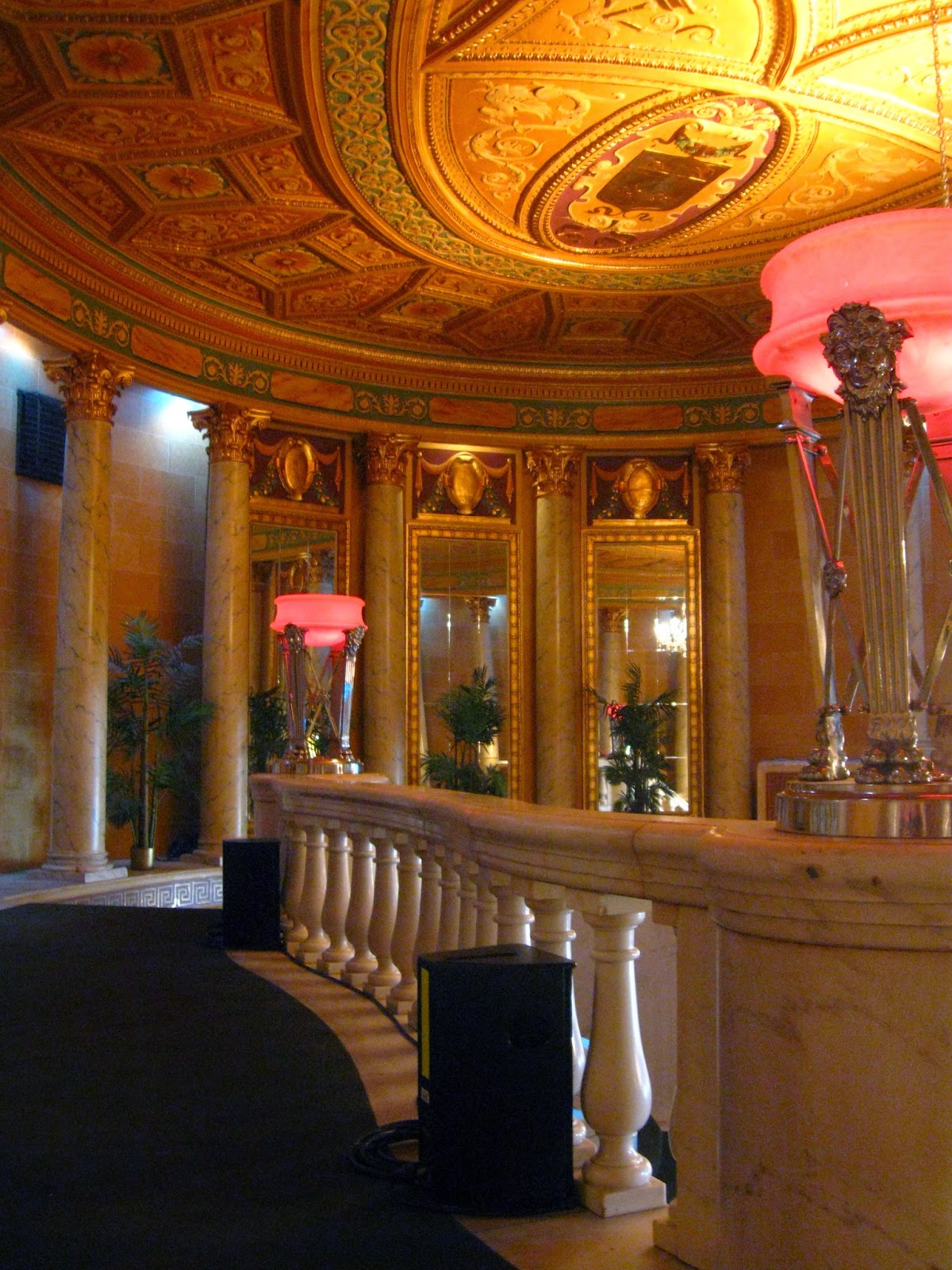 There was of course a Wurlitzer organ installed in the State Theater, but it was removed long ago and now resides in the Castro Theater in San Francisco, where it is probably better appreciated. The theater also had its own orchestra according to Hauser and Weldon, named the State Symphony Orchestra. 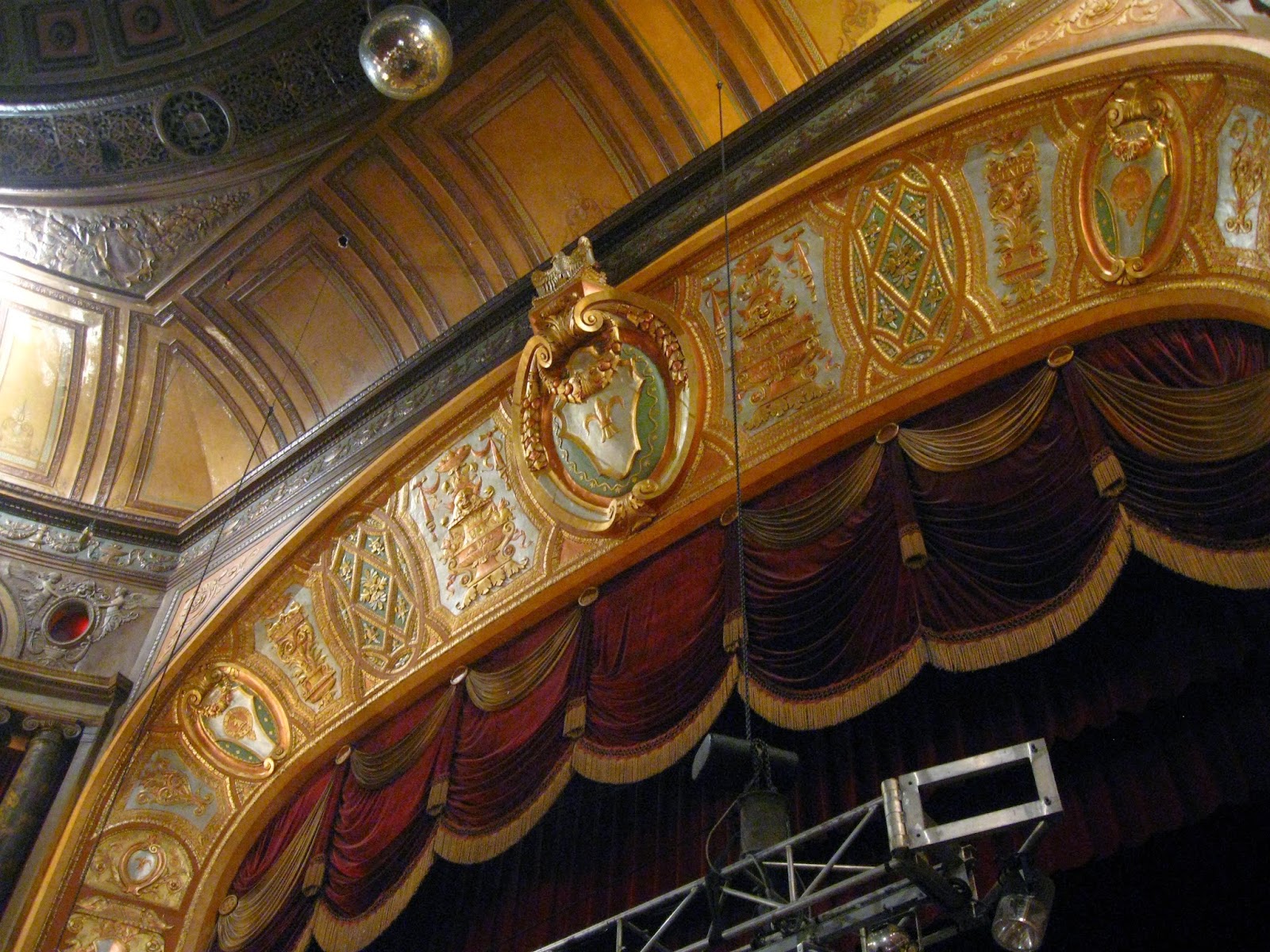 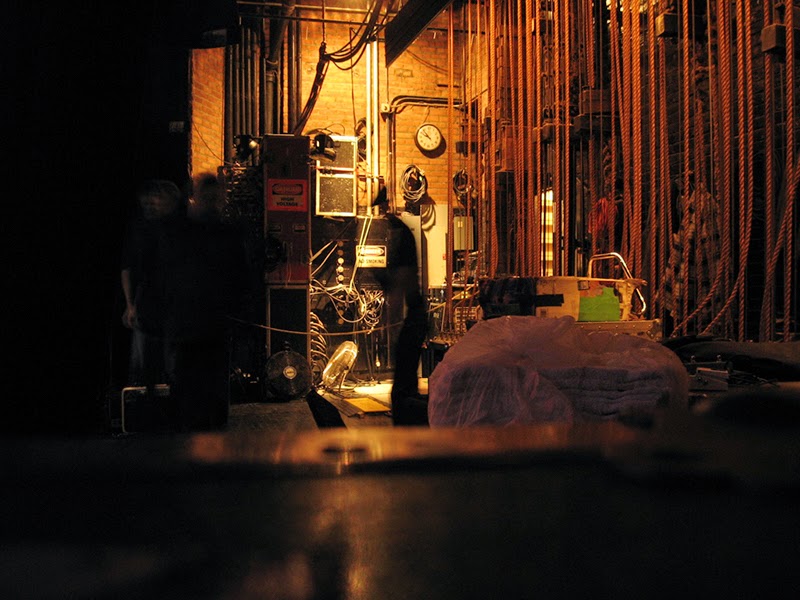 I looked up to the upper balcony and realized with shock that it was actually moving up and down with the beat of the music, with the help of all 1,500 or so fans who were up there jumping up and down to it: 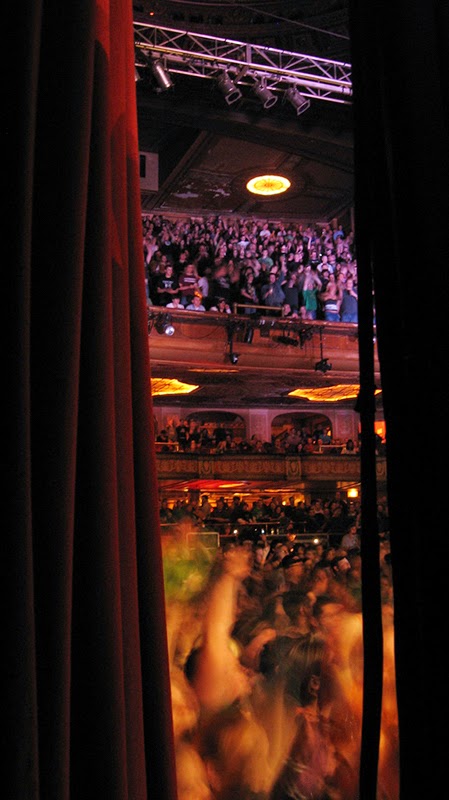 Down below were some crazy moontanned motherf@#%rs getting a little moshy, as is only appropriate in Detroit. 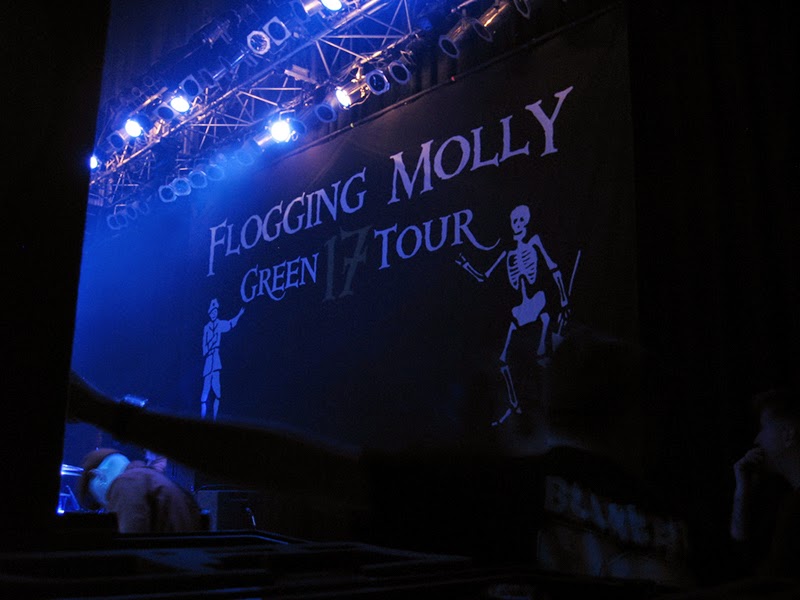 My associate and I were partaking liberally in the juice of the barley, aye, that we were. 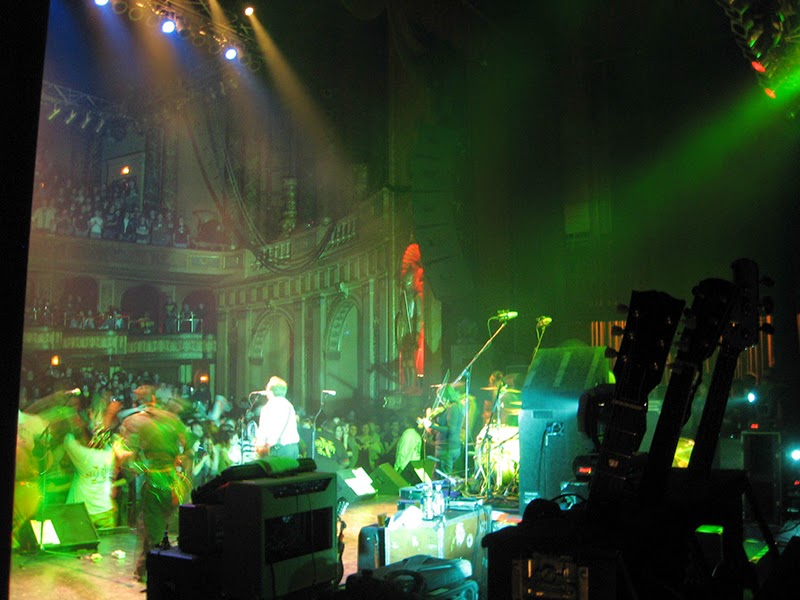 To the point where I was having trouble holding me camera steady... 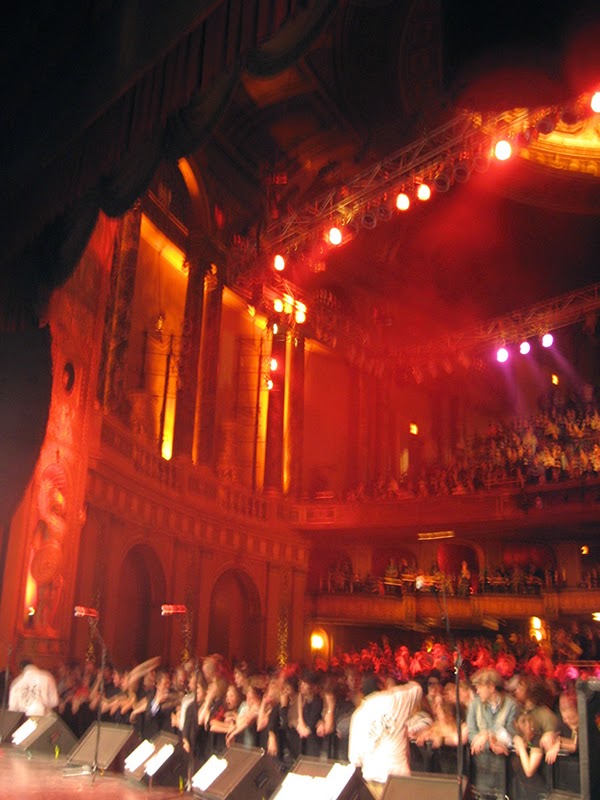 Okay, now that everyone is sufficiently distracted, it's time to slip away from the crowd to go do something dastardly. "EXIT 17"...I like it: 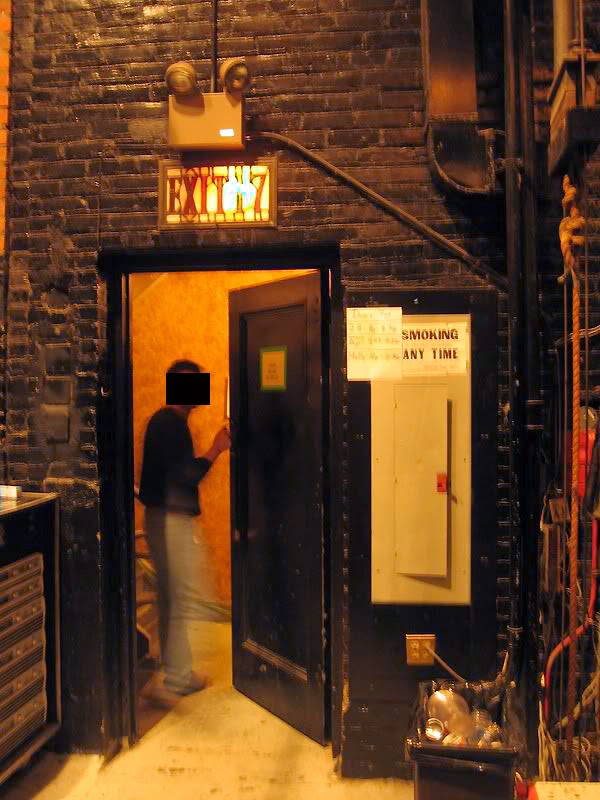 There are at least two basement levels under the State... 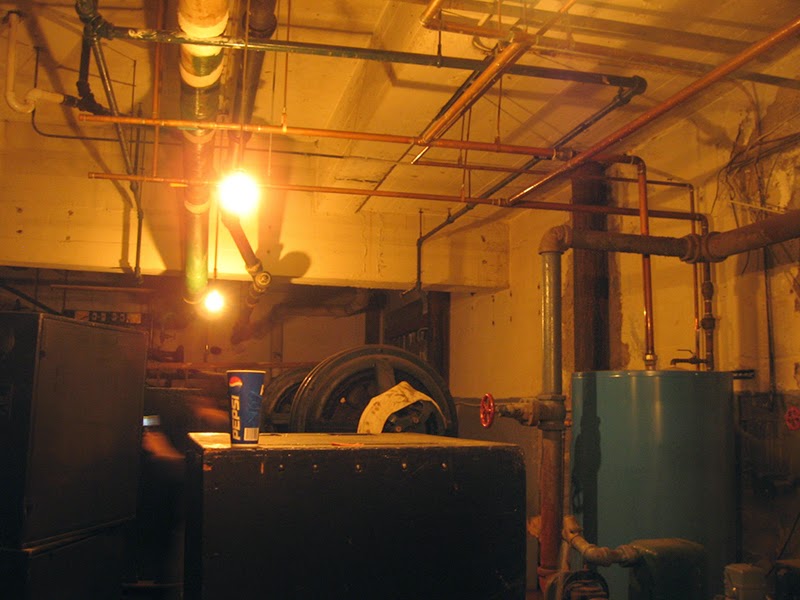 At the bottom of the backstage stair is what I had figured to be an old generator room, with what looks like an old Corliss engine: 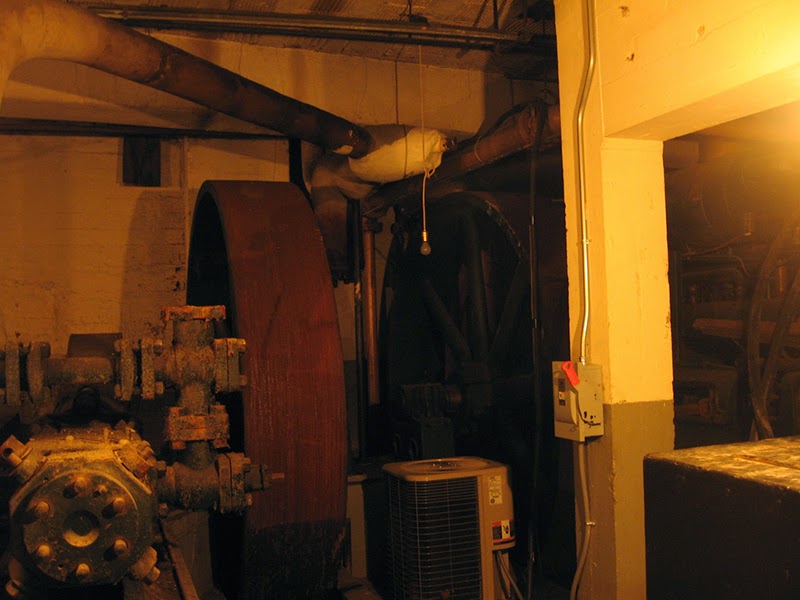 A friend who used to work at the State tells me that "these large York engines and monster flywheels in the sub-basement were for the old air-conditioning system." He explained that the Yorks were "the '50s version" of air-conditioning, and used Freon. The engine with the big flywheel he says was a compressor for carbon-dioxide, a gas that becomes chilled upon compression. The State also used the "acid system" of cooling for a short time.

Dismantling the beast and carting it back up to the daylight world would have been costly and quite a hassle, so here it sits, 90 years later. 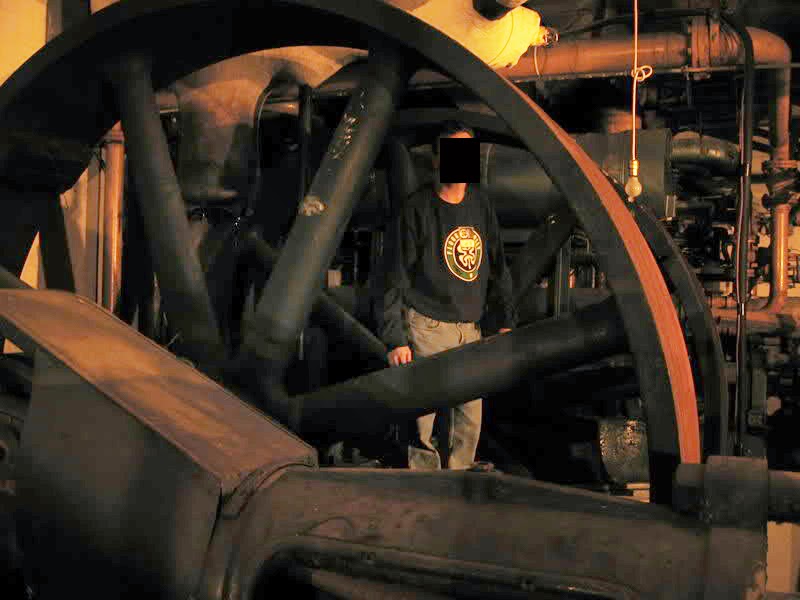 It was a fairly small area, and we shortly moved back up one level.

This is the band lounge, which as a matter of fact is situated directly beaneath the stage, hence the wooden beams. We could hear the band stomping around above us: 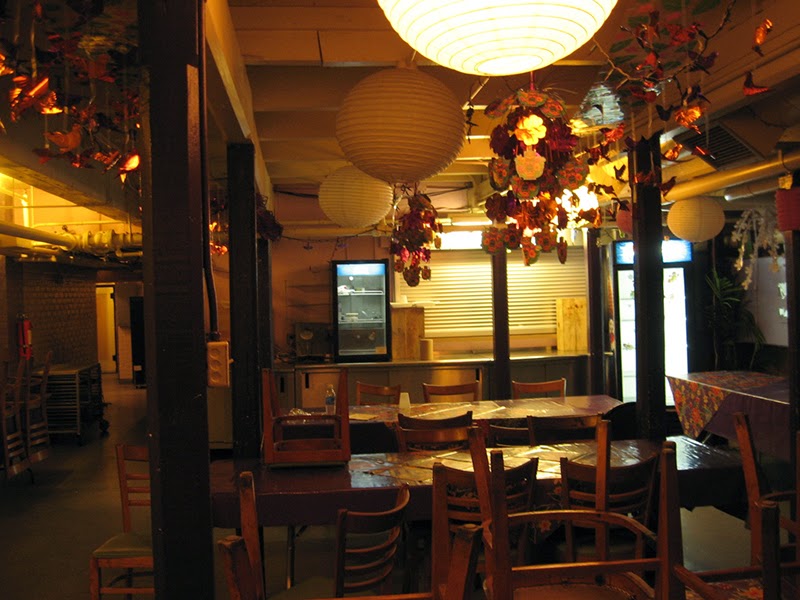 As you can see, the beverage cooler is already depleted of Guinesses...FM is a thirsty band, laddy! Up! 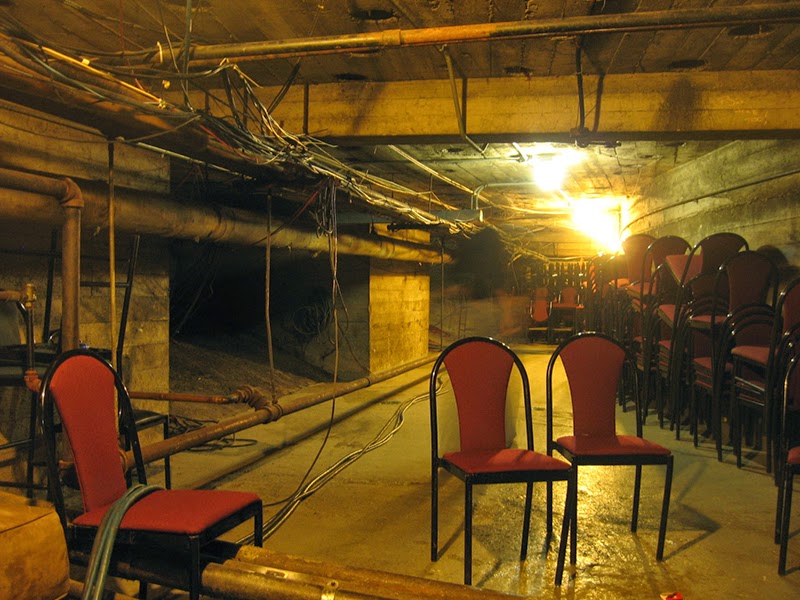 There are other "secret" areas on this level, recesses that span underneath the seating area of the theater, where presently a couple thousand screaming drunken fans were madly jumping and stomping above us, to the deep throbbing of celtic punk rock we could still hear (and feel) vibrating the very foundations of this grand hall.

Which of course dictates the strangely upwardly-arching shape to it, and naturally facilitates the running of wires and cables: 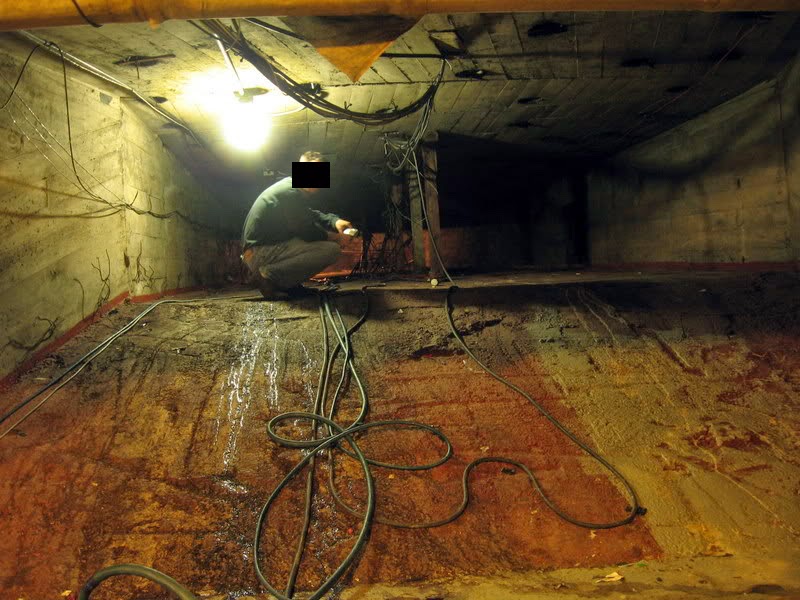 With the close of the set, we made our way back up to the main floor so as not to be missed. Also, time for more beer. 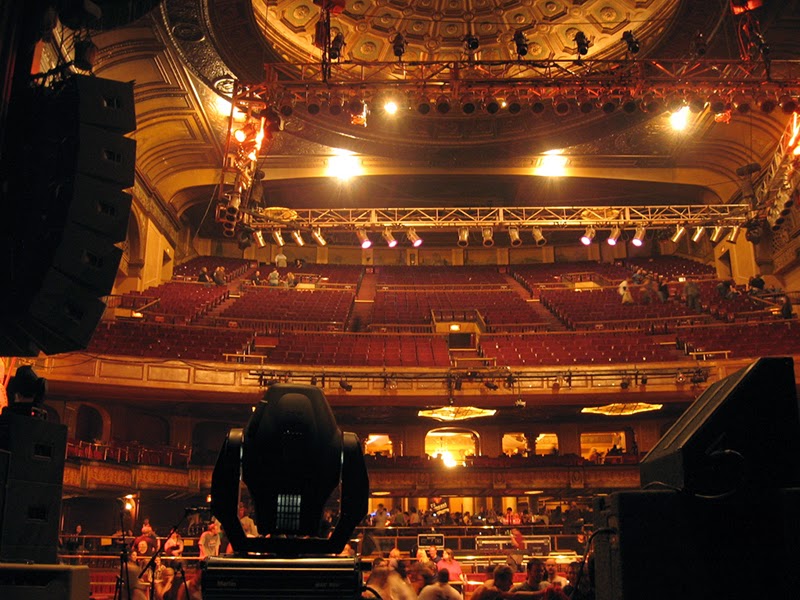 A hell of a lot of famous mf's have performed on this very stage that we were standing on...but I'll name just one. 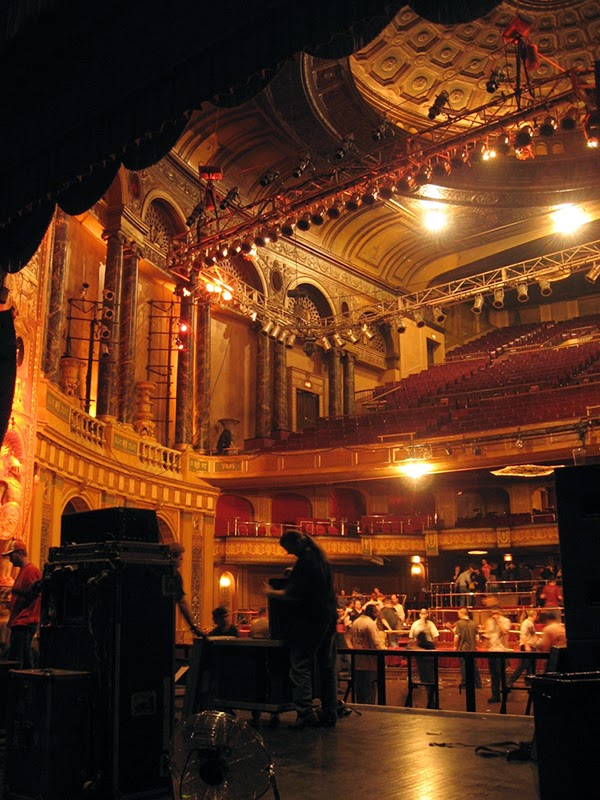 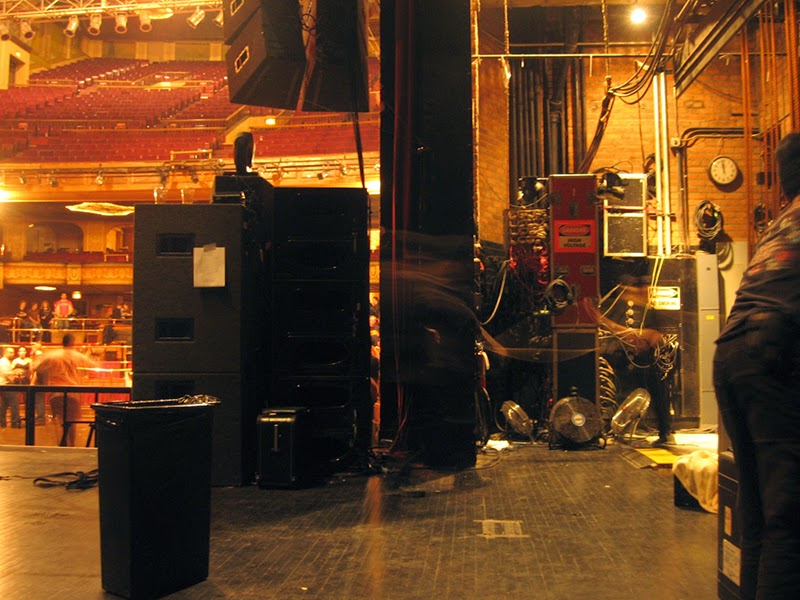 "Annnnd, always look on the briiiiight side of life..." 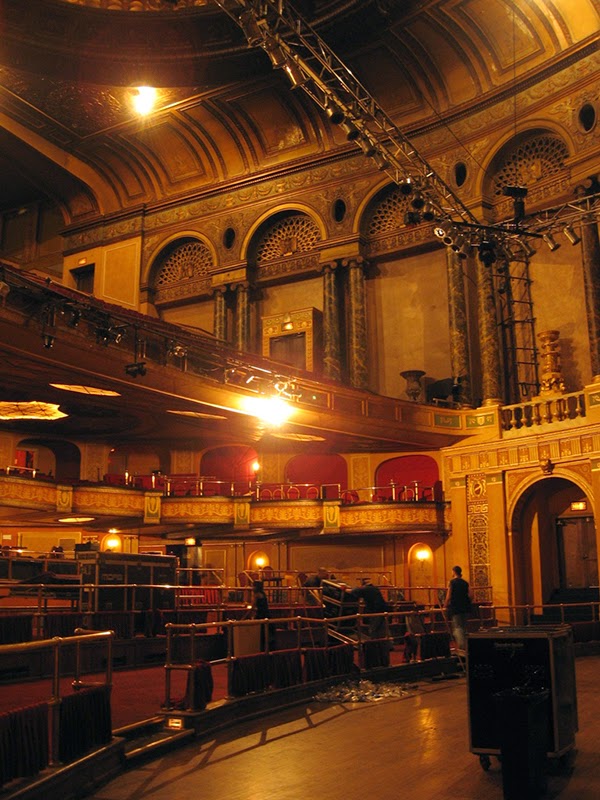 The Palms Building is the 11-story office tower attached to the theater. It contains the office of the Manning Brothers Historic Photographic Collection, which I had occasion to visit one day while researching something. Naturally since it was located on the 9th floor I did some snooping around while I was there.

Here we are looking over the roof of the theater's auditorium from the fire escape, and you can see the side of the Fox Theater as well as the Detroit Life Building: 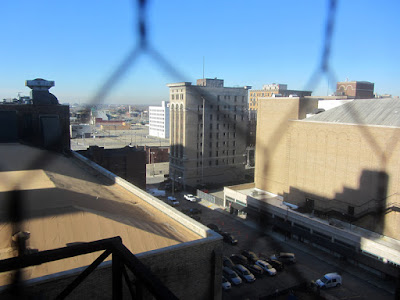 From the 9th floor office window, a view towards Brush Park and former Poletown: 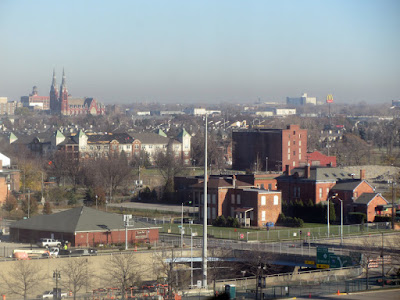