The Detroit Screw Works was established in 1877 as a partnership between F.W. Clarkson, G.G. Clarkson, and H.H. Taylor, and was incorporated as the "Detroit Machine Screw Works" in a plant at 68-70 Champagne Street (that of course is the old pre-1920 numbering, and Champagne is now E. Lafayette). The company stayed at this site until 1892, at which time they expanded into a three story building at the present location of Atwater & Riopelle. 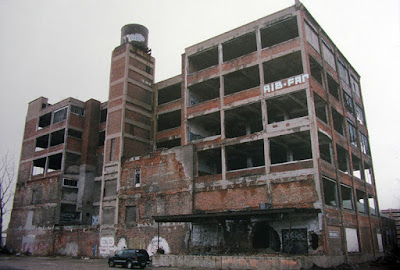 In 1894 the company name was shortened to "Detroit Screw Works," and it was soon again necessary to expand their facilities. In 1905 they erected another building at that site, a three-story reinforced concrete structure, which they added another three stories onto in 1907. 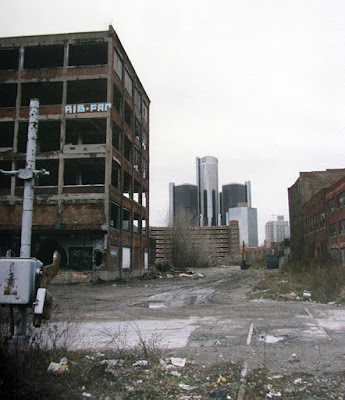 A different source I have seen indicates that this building was built in 1909 by the Albrecht Company, specialists in reinforced concrete, though no mention is made of the architect: 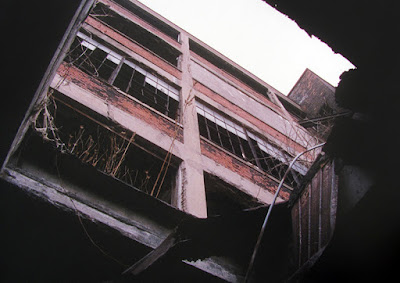 In 1900, according to Burton the Standard Screw Co. "took over the Detroit plant and headquarters have since been maintained in New York City"; 600 were employed in this plant at the time. 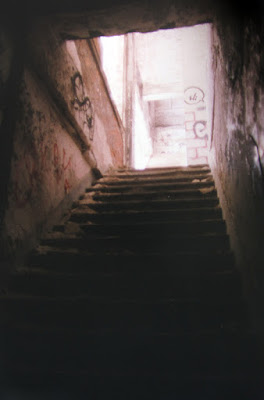 The products of this plant in those days included screws, bolts, or nuts from 1/16" to 4-1/4" size, of steel, brass, bronze, or aluminum.

The Detroit Screw Works handled trade in this business to Michigan, Ohio, and Indiana, but 70% of its output was sold in Detroit and its suburbs. Undoubtedly a portion of their products went directly into the Detroit shipbuilding industry, since this plant was essentially located next to its epicenter.

As early as autumn of 1914, Detroit Screw Works began turning out materiel for the allies in WWI including fuse parts, projectiles, and rifle bullets. Later when the U.S. joined the fray, shrapnel and high-explosive fuses were added to the production list. 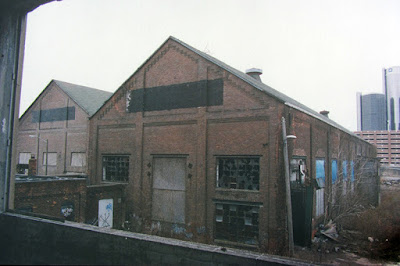 Speaking of World War I, there was a now forgotten terrorist plot to blow up this factory with dynamite in 1917 by a German Detroiter named Albert Carl Kaltschmidt. He also planned to blow up the St. Clair Railroad Tunnel to Canada at Port Huron, and a few other targets in Windsor.

The plot was foiled and Kaltschmidt was caught and tried for espionage, but his goal was to disrupt the flow of munitions to the Allies in Europe. The Detroit Screw Works was making shrapnel used in bombs at that time. What is strange is that Kaltschmidt was a respected member of the Detroit Tennis Club, and president of the Marine City Salt Co. during this time. 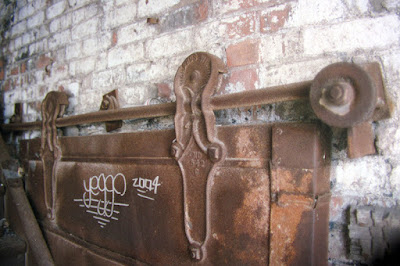 In 1958-59, the Mult-A-Frame Division of the Ainsworth Manufacturing Corp. was listed at this address, 1471 Atwater. Ainsworth produced automobile parts from 1920 to 1957 in their plant nearby at 2200 Franklin. This building was most recently used as the Industrial Public Warehouse. 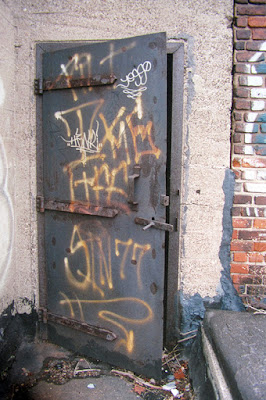 For some reason there were a lot of wrecked cars up in the building. Not sure if this used to be a chop-shop Mecca or if it was just because the last tenants worked on cars. 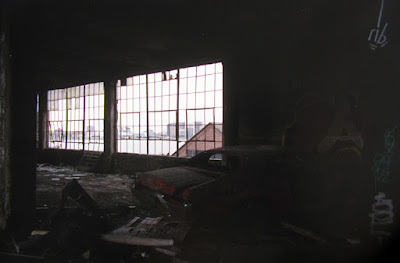 Part of the place had these weird pointed windows framed into the originals, through which you could see the Medusa Cement plant: 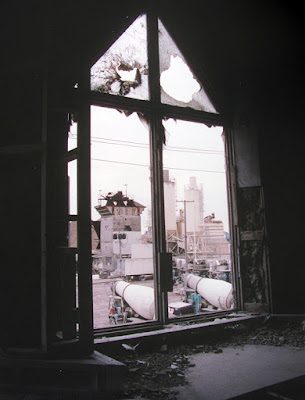 Of course, Medusa Cement was demolished not long afterward. The Atwater District was so barren in the early-to-mid-2000s that it felt like a movie set. In fact underground Detroit rapper Esham shot a video here in 1997 in front of the Screw Works, where you can also see the old Medusa Cement as well.
Today (in the late 2010s) it is gentrifying, with even new condo buildings springing up out of nowhere. 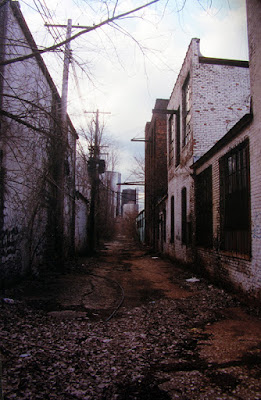 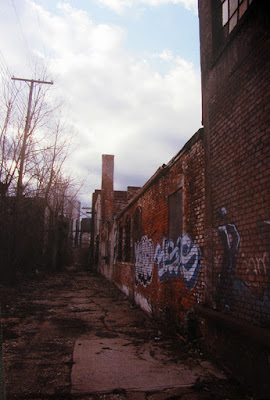 Much of its character derives from the fact that it is such a complete collection of Victorian-era industrial buildings that it seems as though it should be a movie set. 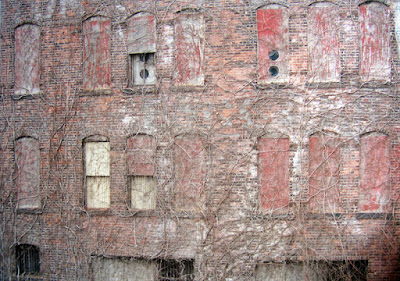 I think everyone took this shot back then: 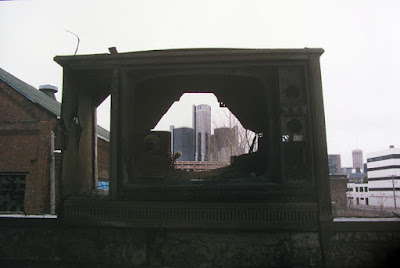 Several more cars here...I believe the one in the foreground is a '68 GTO/LeMans body: 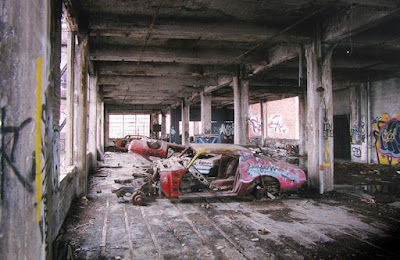 The view from the roof was very good. In fact this was a very popular spot for fireworks viewing until it was torn down. 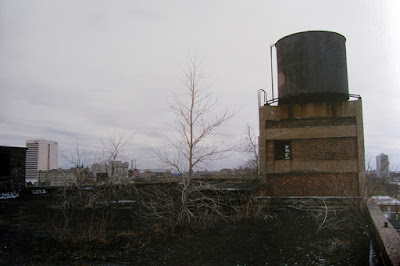 If it were still around today, it would be the best, hands down: 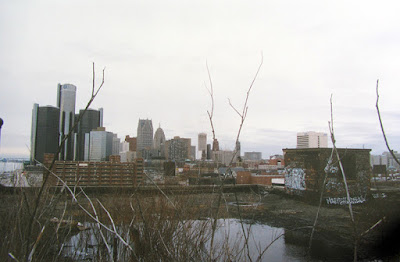 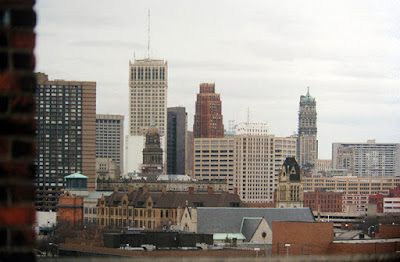 The screw works was also very popular with skateboarders, as some of them had set up ramps on one of the floors. 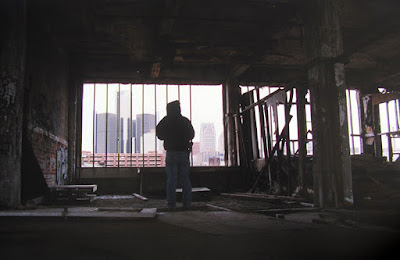 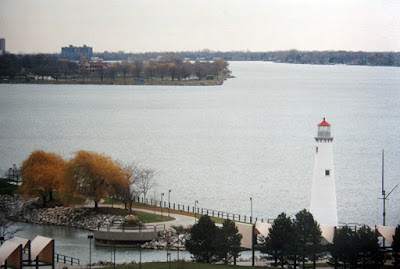 The screw works was demolished early in Kwame Kilpatrick's term as mayor. First the older brick buildings went, and then later the cement structure came down too: 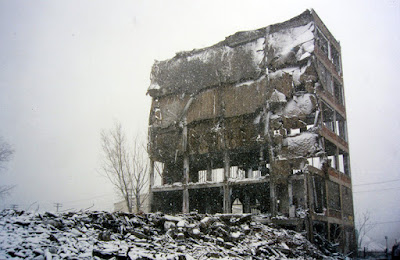 Here's an aerial image I screen-captured, showing the entire works before it was gone:

One more interesting tidbit...one of my readers informs me that his dad once told him that the unofficial nickname of the company was “F*ck and Run.”