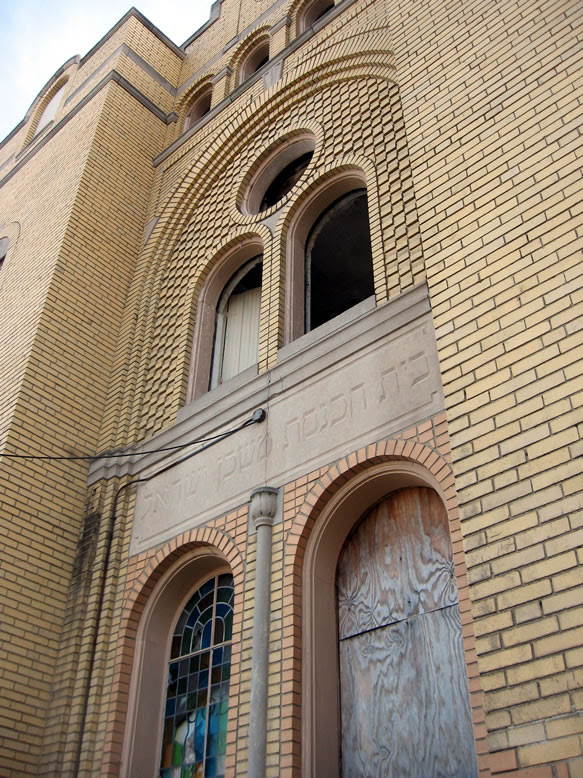 It is tradition to give a more familiar name to small synagogues like this, usually after the street where they were located. Hence, Blain Shul. The Yiddish word "shul" translates to "school," which is a term used mostly by Orthodox Jews to describe a synagogue as a place of study. Conservative Jews generally just use the word "synagogue," while Reformed Jews use the word "temple." Shul has mostly fallen out of usage today.

I explored the Taylor Shul in a different post. 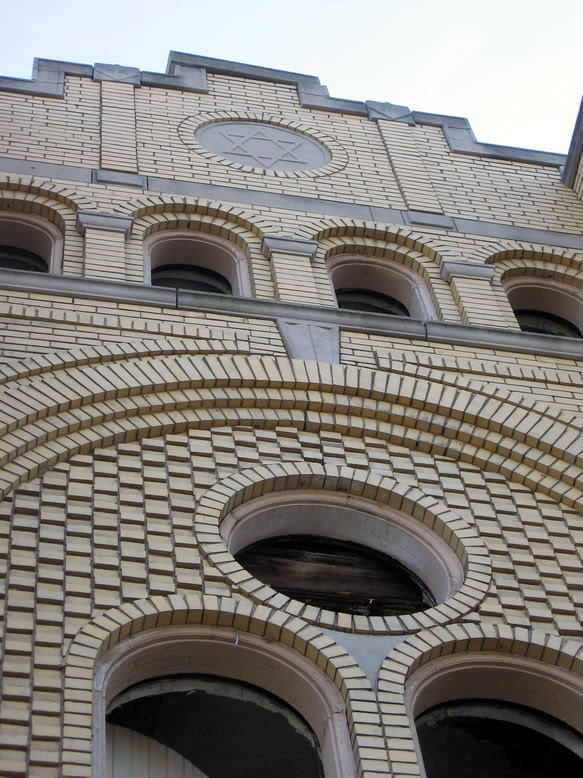 The book Harmony & Dissonance: Voices of Jewish Identity in Detroit, 1914-1967, by Sidney Bolkosky says that Mishkan Yisroel was founded at Benton & St. Antoine, but moved here to Blaine Street in 1925, with Rabbi Isaac Stollman in charge. According to some c.1912 proceedings, it seems as though their first building was shared with or leased from the Board of Education. 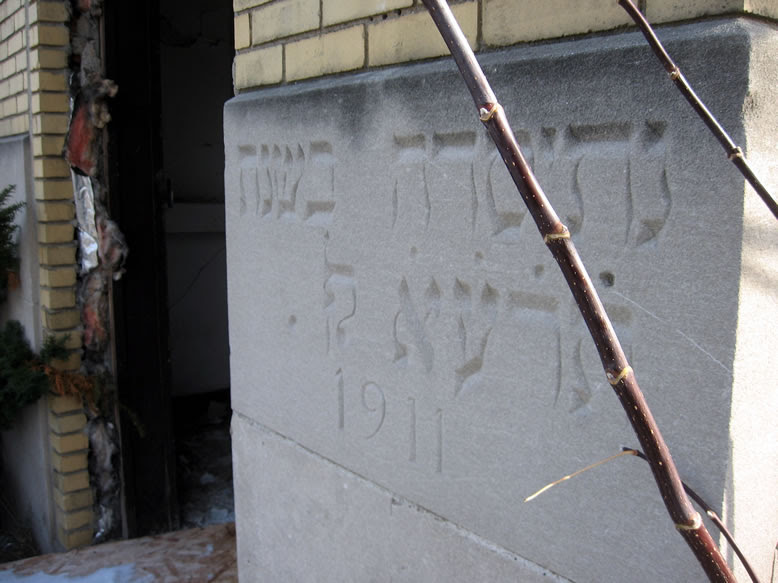 Of course the Jewish population of Detroit, which had been mostly concentrated on the city's west side, began migrating north of 8 Mile Road by the 1950s and this building was sold to an African-American Baptist church group. It was home to the congregation of "God's Inspirational Kingdom," which closed around 2003: 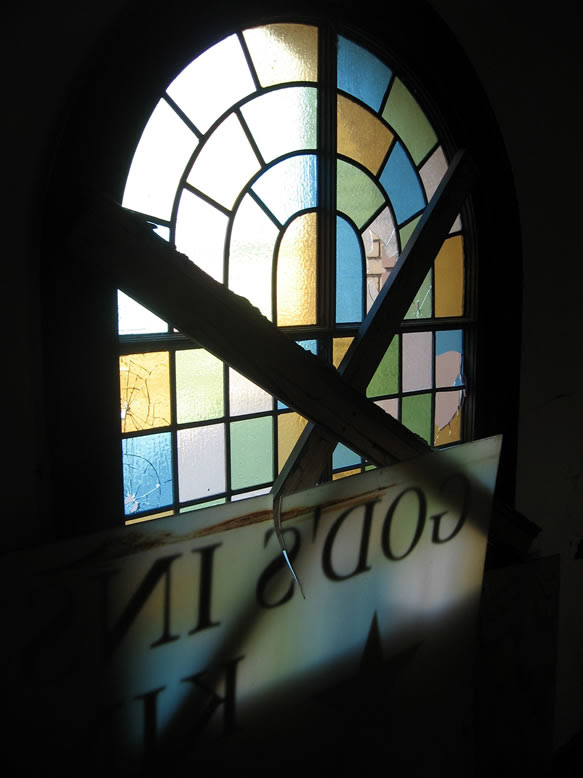 The book Echoes of Detroit's Jewish Communities: A History, by Irwin Cohen notes that the new Mishkan Israel was built on Nine Mile Road in the suburb of Oak Park in 1958. After the 1967 Riot the migration had turned into a full-fledged exodus, just like when Moses parted the Red Sea. 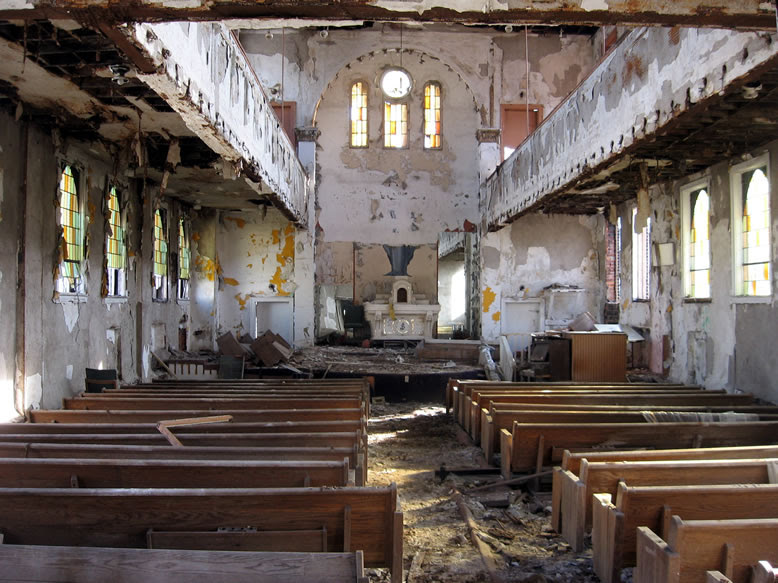 In a strange column by Danny Raskin in the Detroit Jewish News, August 12, 2010, I dug up a very interesting tidbit. It seems that one last final act of abandonment of this neighborhood came not long after I visited this holy sanctuary. The cornerstones (seen three photos above) were chiseled out recently, and now repose under a tree near the parking lot of Adat Shalom Synagogue in Farmington Hills. 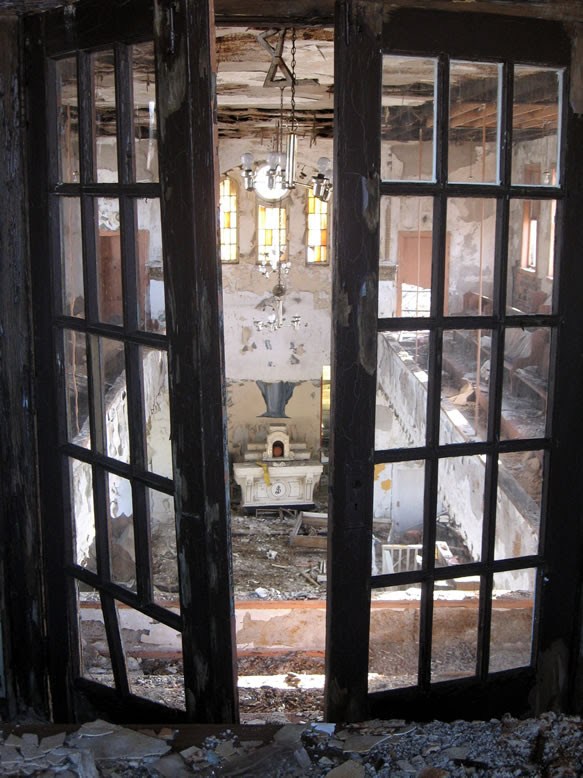 Marvin Yagoda, owner of the famous Marvin's Marvelous Mechanical Museum (also in Farmington Hills) had them chiseled out and brought to Adat Shalom. The article states that should the Jewish Historical Society ever move from the Jewish Community Center in the suburb of West Bloomfield, the cornerstones are among the items to be displayed in it. 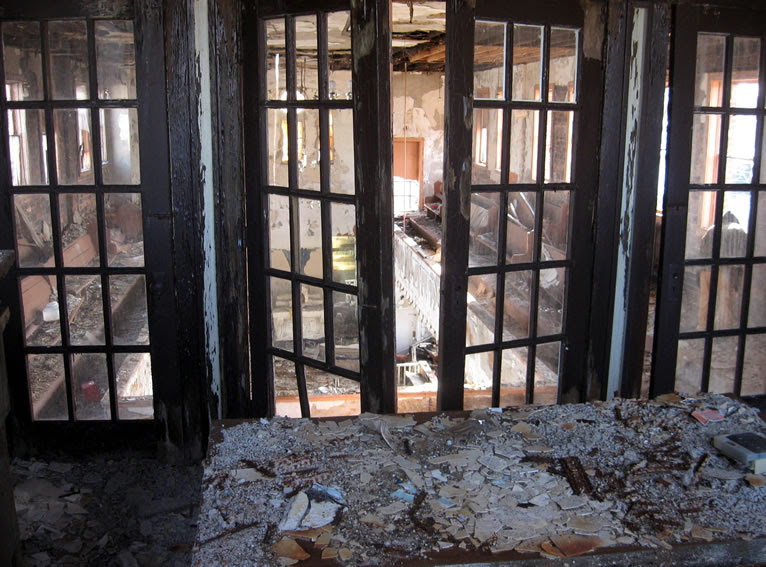 Marvin also owns Sam's Drugs in Detroit, presumably started by his father, Sam. His parents and grandparents were members of congregation Mishkan Yisroel. Though it was hard to see any hope in this area of the city—one of the worst in terms of crime and decline—the act still seems callous. 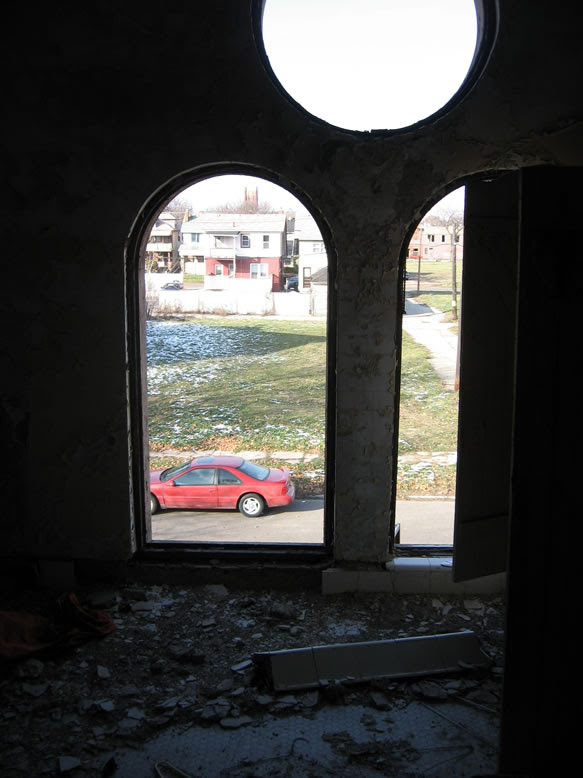 The article says that the cornerstones were taken as mementos of the Yagoda family, and blithely states that they were "cut out from the ruins," as if it were describing some war-torn area somewhere overseas, and the stones were taken to save them from further destruction during rocket attacks. The way the article reads, it seems implicit that the reader is to presume that Detroit is in a war-torn state. 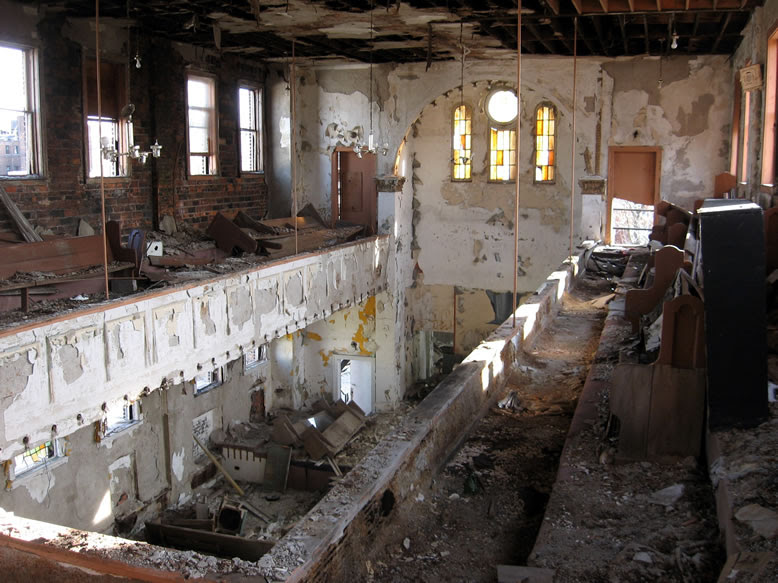 One of the cornerstones is dated 1911 and was moved from the original synagogue, but this article contradicts the "Benton & St. Antoine" location mentioned earlier, saying that the original Mishkan Yisroel was founded on Hastings Street. The corner of Benton & St. Antoine no longer exists, and became part of the Brewster Homes projects. I wrote about the Brewster Projects in another post. In any case, one of the two cornerstones came from the original building and was moved here in 1925, sort of like how Ste. Anne's Church has a cornerstone from their c.1818 building mortared in with the present one. So I suppose it is only natural that this temple's cornerstones follow the congregation to its present home.

In this next photo, a Star of David has probably been replaced by a Christian cross here: 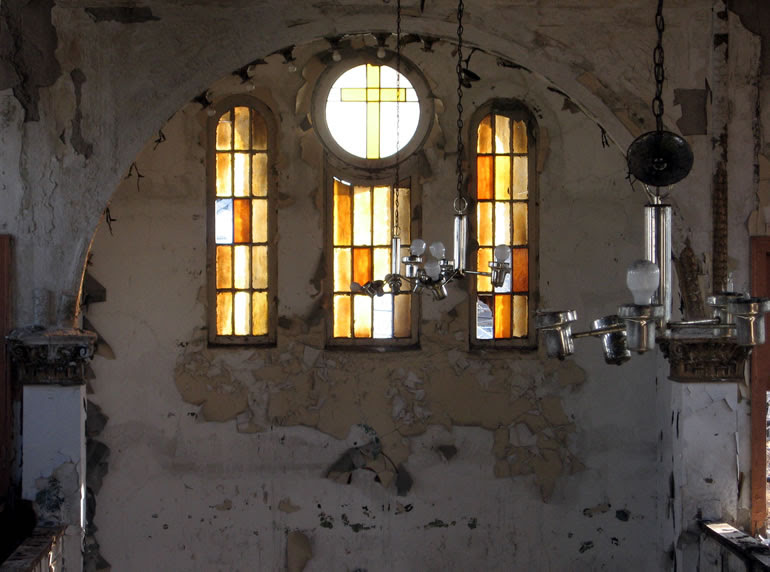 According to his obituary in 1980, Rabbi Isaac Stollman was born in Russia in 1893, and came to Detroit in 1924, conveniently right before this building on Blaine was consecrated. Stollman also later served other posts in Detroit, as rabbi of Stoliner Synagogue, founder of Yeshiva Beth, Yehuda and founder of the Council of Orthodox Rabbis. He was the dean of Orthodox rabbis of Detroit for 40 years, and was the first president of the Religious Zionists of America. Rabbi Stollman immigrated to Israel in 1965. 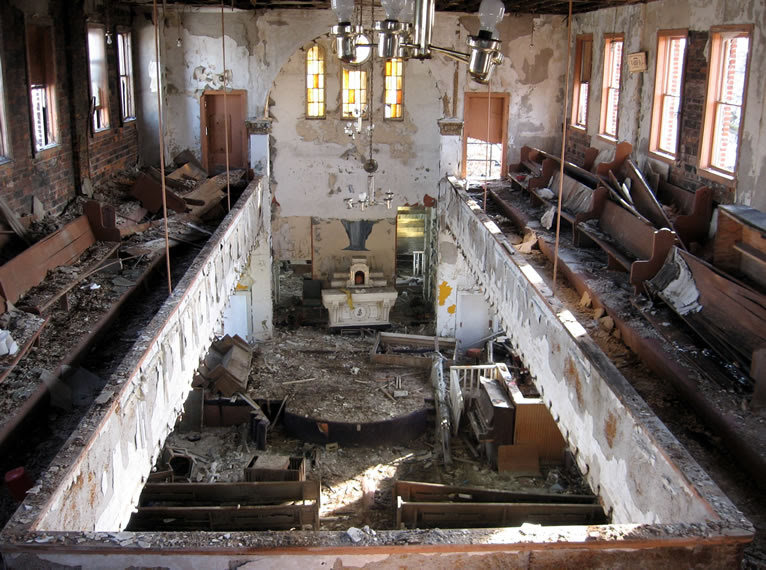 Stollman published several philosophical essays on the Torah, was the author of many articles in the Yiddish and Hebrew press, and was a "noted orator" in both languages. He was 86 years old when he passed away. 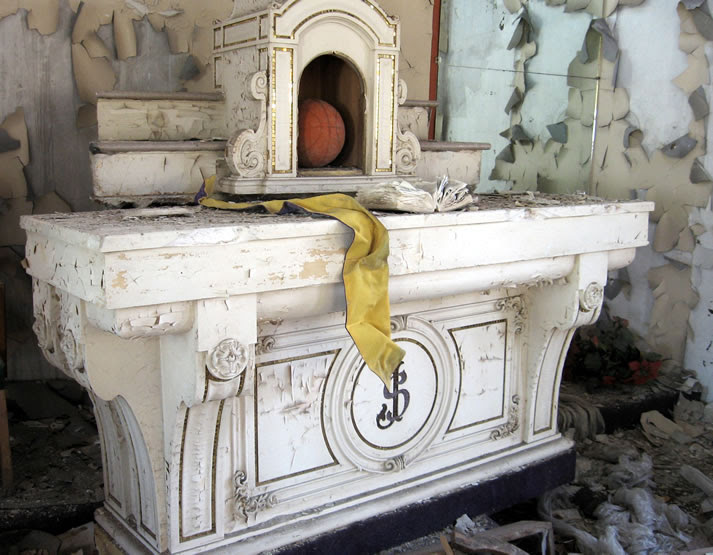 Yes, that is a basketball in there. Any other questions? The Hebrews in the D do things a little differently than you're used to. 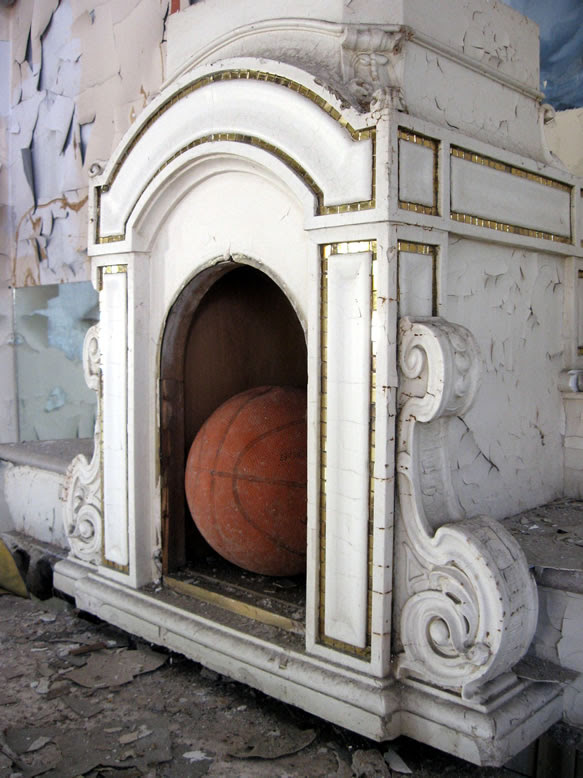 Actually this is a Christian altar left over from the God's Inspirational Kingdom congregation. 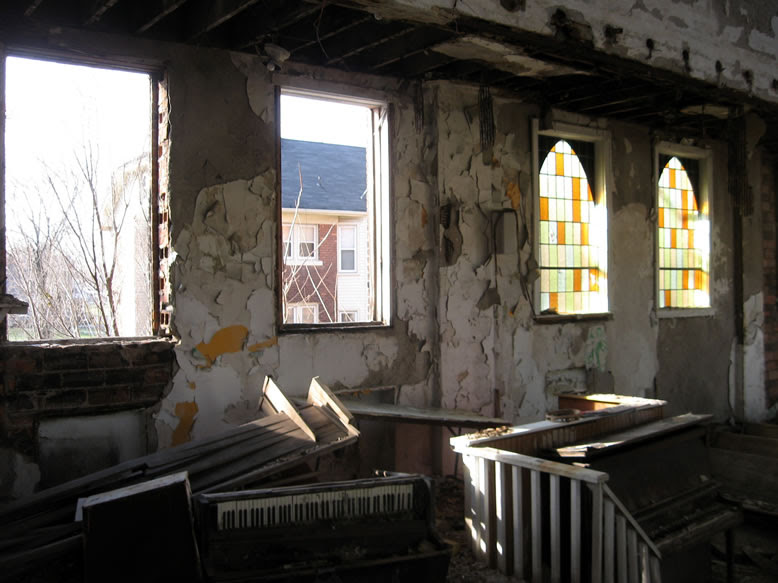 At time of writing in 2014, the Blaine Shul is in even worse shape than when these pictures were taken. 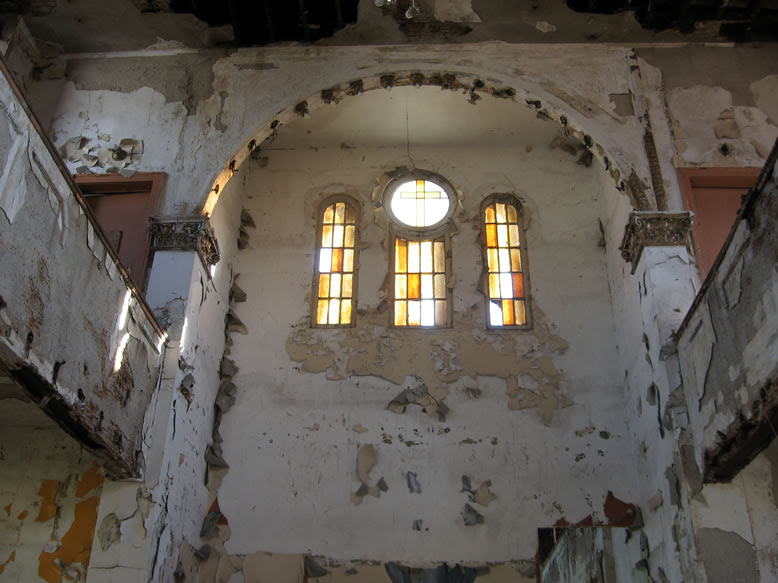 References:
Harmony & Dissonance: Voices of Jewish Identity in Detroit, 1914-1967, by Sidney M. Bolkosky, pg. 30
Proceedings of the Board of Education, Detroit, July, 1912