Chisel and I had our eyes on this fortress for awhile, the NBC or "NaBisCo" Building, an acronym that once stood for "National Biscuit Company." 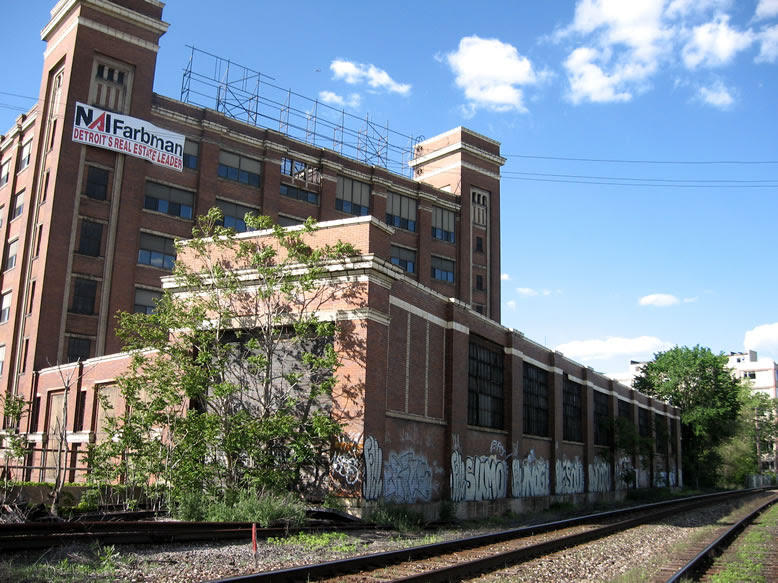 The four-turreted keep at 899 Baltimore Street reminded me of a sleeker, modern version of the Tower of London but was built in 1920, according to Emporis.com. It was actually where the Nabisco Corporation did all their baking for the Detroit market. 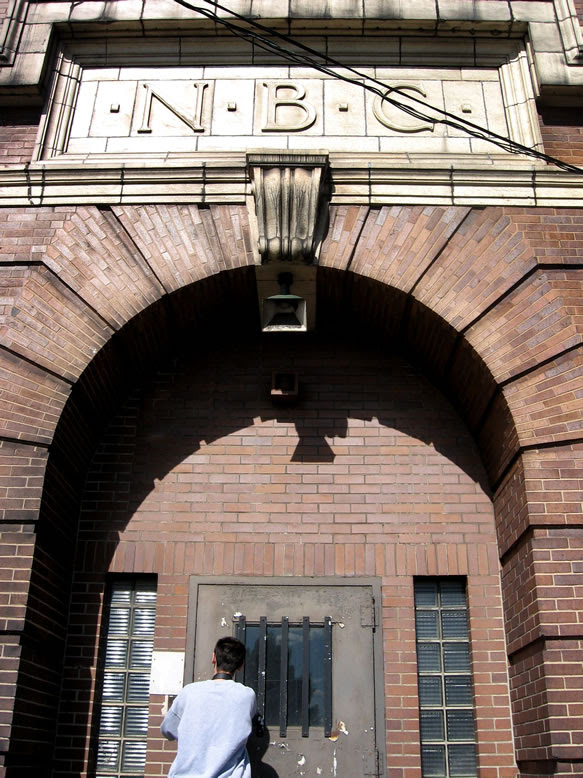 According to a report submitted to the Historic Review Commission of Pittsburgh, all Nabisco buildings nationwide (of which there were several) were built in the same Chicago School style with the same color brick, by the Chicago architect Albert G. Zimmermann (1866-1947). 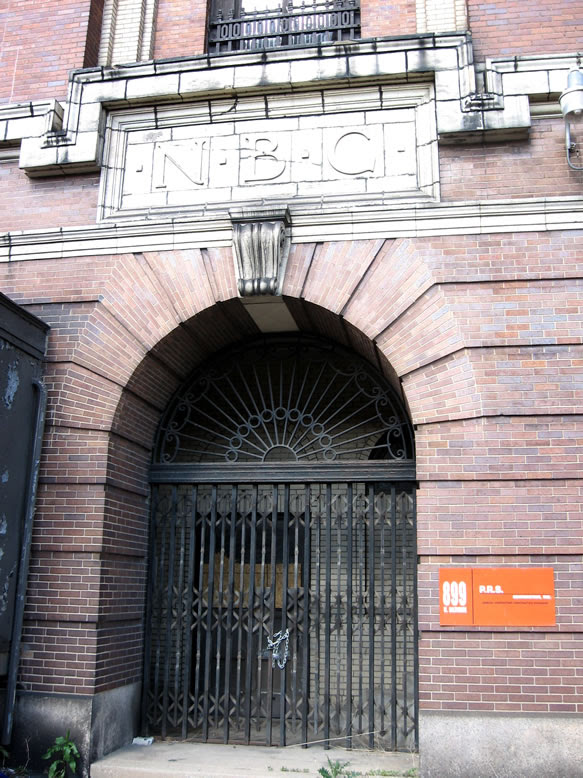 According to that same report, Nabisco experienced a boom in popularity due to the success of their branding and packaging style, which caused the company to launch a building campaign to provide enough bakeries for their popular crackers.

The buildings commissioned by now company president Adolphus Green were different from the common manufacturing buildings of the World War I era. Green hired an architect full-time to design factories that would have enough style and dignity to inspire loyalty from the workers and act as shining models of modernity to the communities in which they stood (Cahn, 125). He hired Chicagoan Albert G. Zimmermann (1866-1947) to design the buildings using a soft colored brownish-orange brick with cream-colored brick trim and ranging from three to eleven stories. Zimmermann’s earlier practice had consisted mostly of residences and apartment buildings until his work for Nabisco. His Nabisco designs were featured in the American Architect magazine in both 1912 and 1916.

The new Nabisco bakery factories built during this era (including Detroit's) all "had a consistent look, similar reddish brick, multiple stories and stair towers increased the company’s ability to transport products to the grocer and people’s homes." Another source indicated that "Each of the new plants included showers and locker rooms for the employees as well as fireproof stairways and other up-to-the-minute fireproofing techniques." This collaboration between the company's president and its chosen architect changed the way cookies and crackers were manufactured and marketed, according to the historical report. 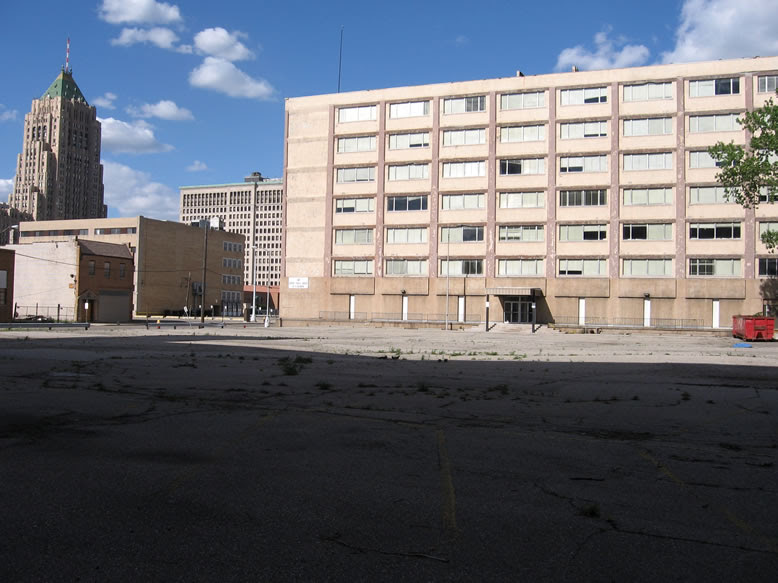 The U-Haul Corporation recently bought and renovated this old structure into storage units to facilitate the boom of people moving into downtown and midtown Detroit. Their blog on the renovation process and history of their new building notes that "national corporations were in their ascendancy at the turn of the century and architectural uniformity was a new concept for the time."

That's something we completely take for granted now, and we even do a double-take if we pass a Walgreen's or Pizza Hut that isn't precisely identical to the last one. Perhaps this is what has kind of created the disposable building culture that results in the habitual demolition of every vacant structure  these days, rather than reusing them. With the kinds of buildings we are constructing now, it is basically necessitated. How could you possibly reuse a vacant McDonald's with that big red roof for anything except another McDonald's? I know Burger King sure as hell isn't going to move in. 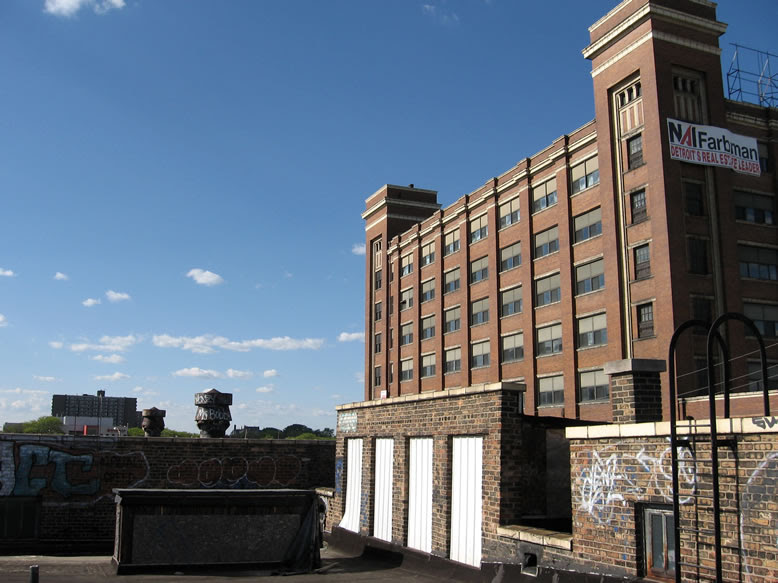 Chisel and I were unfortunately not able to make it into the well-sealed (and alarmed) main building, but we did get into the shorter building next to it that had clearly been designed in the same style. It looked like it might have been the garages for the old Nabisco delivery trucks: 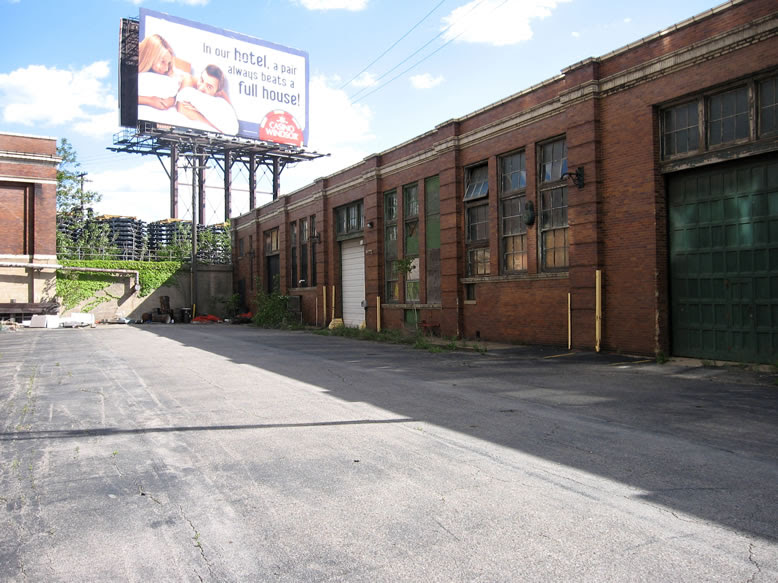 Once we popped inside we found signs that this one wasn't exactly abandoned either...nervously, we listened for a few seconds before quickly making our way to the roof, just in case. 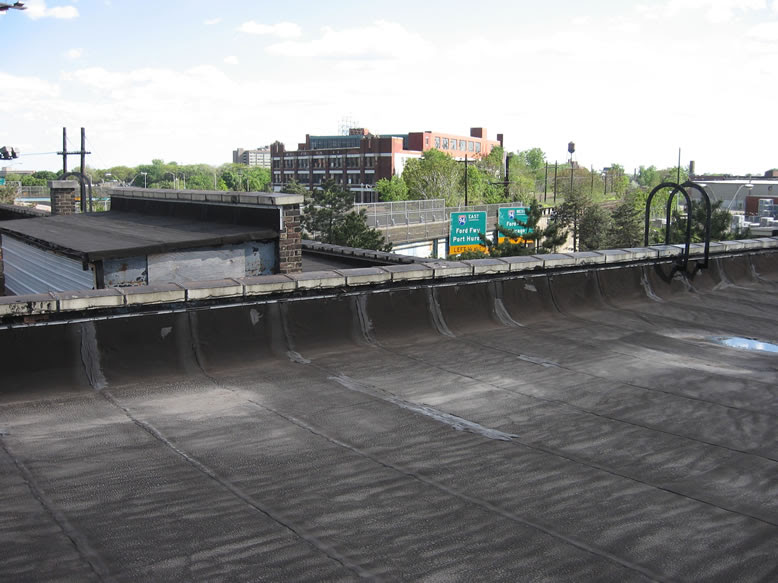 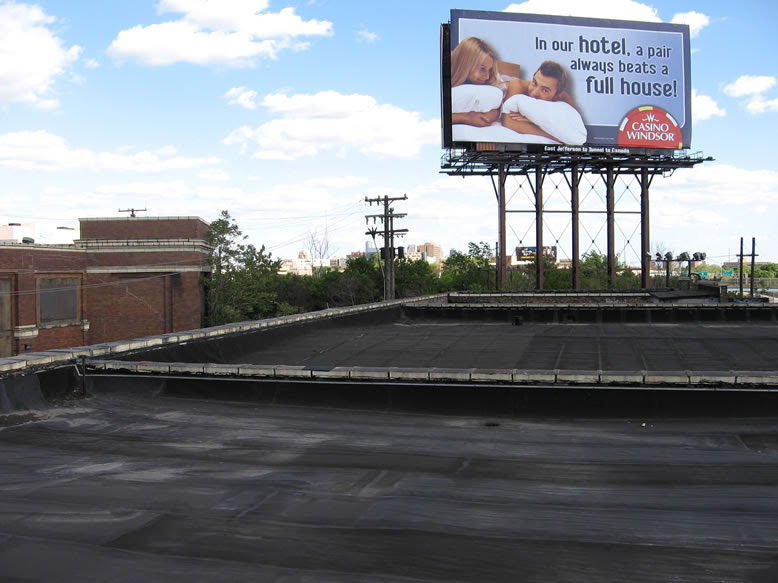 In retrospect, I am glad we bothered to check it out because when U-Haul took the property over, part of their "renovation" apparently included demolishing this perfectly good ancillary structure. Nobody seemed to notice it was gone. Guess what they use the empty space for now where the garage used to be? 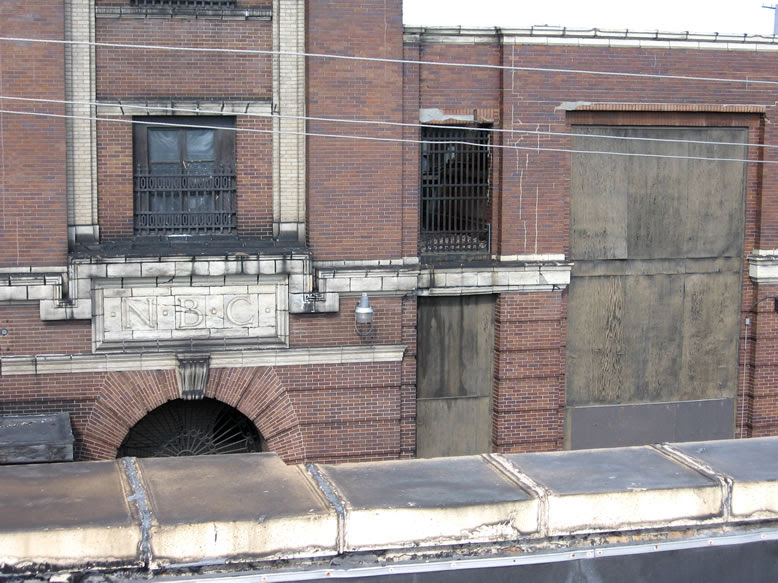 There was a nice up-close view of the Lodge Expressway, I guess: 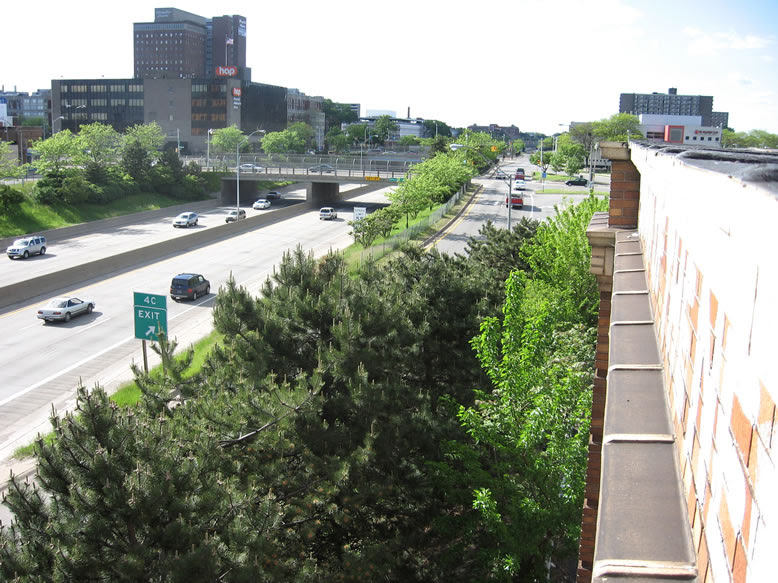 There was a lot of interesting stuff found in the interior of this building. However, we both decided it would be wise not to linger here much longer, and made our way down the train tracks to this place, which we couldn't quite get into either: 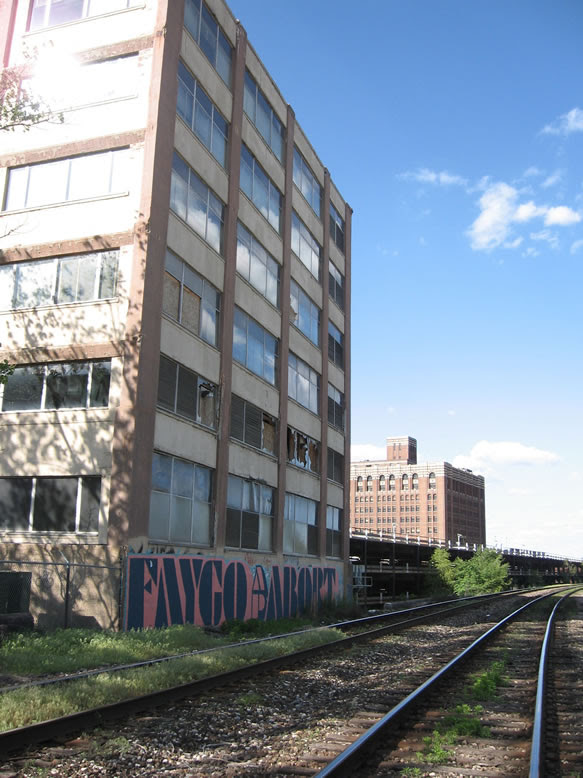 It was currently being used as storage by the Detroit Public Library, and unfortunately was demolished a few years later. 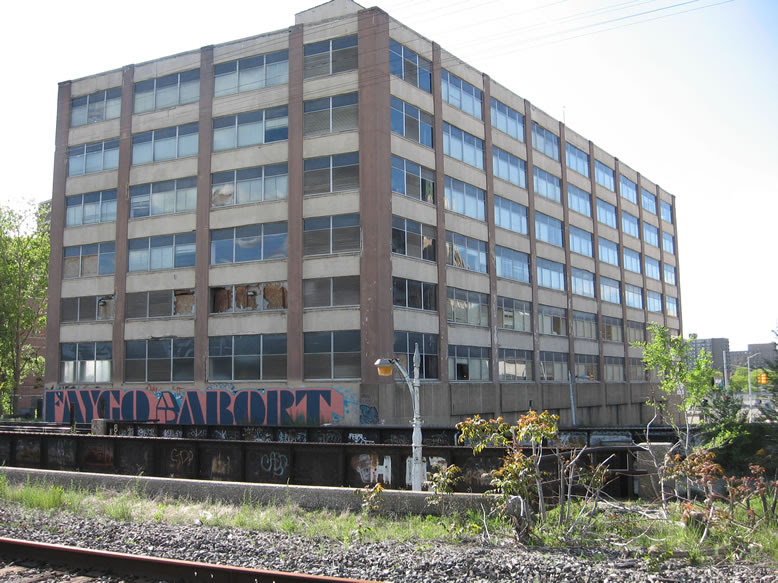