It's always great when I see places that I've explored in the past get adopted and start on the long road back to viability. One such place that I just learned about that falls into that category is the former Detroit Police 6th Precinct Station, which I also happen to drive past on a regular basis because it is near my house, so I am excited to see it being stabilized instead of continuing to decay.

Ed Steele purchased the building on February 14th, 2014, and cleanup began on April 19th with a few volunteers and neighbors. The plan, as I understand it, is to turn the old station into a "state of the art" cloud-hosting data storage center with a museum section as well, presumably dedicated to Detroit Police history. The data servers will reportedly be locked inside the jail cells, and much of the material to repair or shore-up the building has been reclaimed from other structures. For example some of the materials came from the Pontiac Silverdome auction.

I was so convinced that this place would continue to decline into oblivion that I actually had designs on looting rescuing this particular piece of stone in the event that the inevitable blight-demolition claimed the structure:

According to research found on Ed Steele's "Restore the Detroit 6th Police Precinct Building," construction of the 6th Precinct was started on June 19th, 1930, and it was designed by the Detroit-based architectural firm of Van Leyen, Schilling, & Keough, who were headquartered at 3440 Cass Avenue. That firm also designed the now-demolished Grayling Elementary School on State Fair, which I explored in an older post.

The station, at 6840 McGraw Avenue, opened for business sometime in 1931, replacing the old Vinewood precinct house.

The 6th Precinct covers a large portion of what was northern Springwells Township, which was gradually annexed into the cities of Detroit and Dearborn by the late 1920s. According to a book entitled Detroit Police Department, the 6th Precinct station was originally located at Vinewood & Myrtle, and was founded there in 1892. That corner no longer exists; Myrtle has been renamed MLK Boulevard, and the area where it would have crossed Vinewood Street has been heavily altered, although what looks to be a former fire station still stands there.

Under the front desk was a makeshift shotgun holster box screwed into the wood in typical Detroit Police fashion, so that there was always a backup shorty-howitzer available in case shit got ugly: 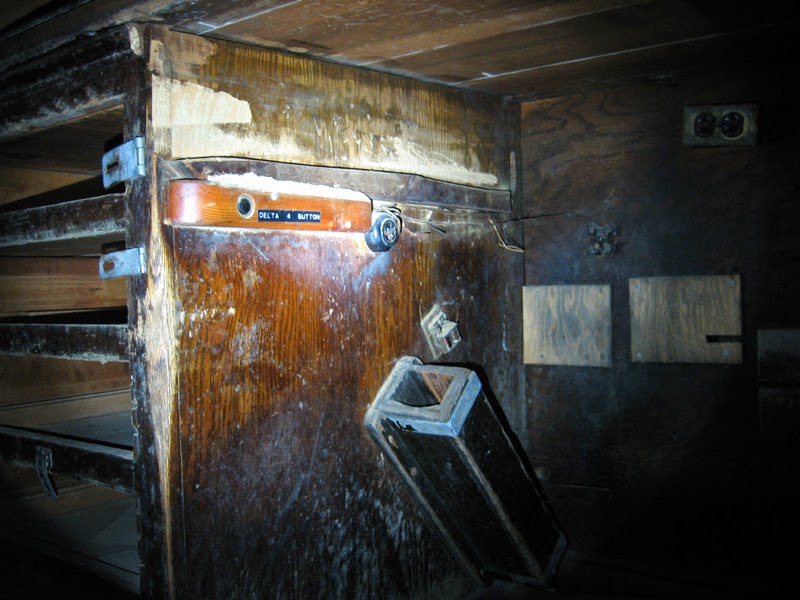 I have seen makeshift firearm accommodations such as this in at least two other abandoned police stations in the city, usually in the form of a leather pistol holster screwed in place. The panic button above it is labelled "DELTA 4 BUTTON"...I suppose that means they would push that if shit really got out of hand and a shotgun wasn't going to be enough, at which point the cavalry would arrive? Or maybe it's a RoboCop / Delta City reference?

According to the Detroit Police Department's 1982 Annual Report, which I accessed via a photographic image on the Restore the Detroit 6th Police Precinct Facebook page, the 6th Precinct at that time had many ethnic Polish-American families living within its borders, many of which had been in the same house for generations and who most likely settled in the area originally to work at the Kelsey-Hayes Wheel Plant nearby.

However, by 1981, the precinct began to see "a number of known prostitutes" begin to appear in the area, and executives at the precinct responded by establishing a special enforcement detail, as well as a "morality unit" to assist by inspecting the operations of establishments with liquor licenses. Also in 1982, volunteers and community members joined together to put on a summertime activity program for youth, which they called "6th Precinct Fun Day," and attracted hundreds of youngsters.

The word "Tuebor" is a motto emblazoned on the official seal of the state of Michigan, and translates from Latin as "I Will Defend," so I am led to believe that this may have been a publication for those who protect and serve. Anyway, Hendrix lost.

Here is a sampling of arrest records to be found laying about:

Again, I wrote in a previous post about the Kelsey-Hayes Wheel Plant strike in December of 1936, during which the Detroit Police were summoned once the UAW strikers had occupied the plant and barricaded themselves inside. Since that plant falls within its borders, it is most likely that the policemen who were there during the standoff were dispatched from the 6th Precinct.

Tensions between labor leaders and police were running at an all-time high following the massacre of demonstrators during the Ford Hunger March at the Battle of the Overpass, and it seemed certain that violence could erupt again here, since the current Detroit Police Commissioner was a staunch opponent of organized labor. However, it was due to an unusual ruling by the Wayne County Prosecutor regarding sit-down strikes, the orders of Detroit Mayor James Couzens, and some quick thinking by UAW organizers that kept the DPD from storming the building to retake the plant that night, a move that almost certainly could have started a riot. Read more about that historic event in my previous post, HERE.

The highly contentious beating death of Malice Green at the hands of two Detroit Police officers in 1992 occurred at a spot on Warren Avenue near 23rd Street, which appears to fall within the bounds of the 6th Precinct. Were Officers Larry Nevers and Walter Budzyn assigned to this precinct station at the time of Malice Green's death?
[Edit: a reader tells me that no, they were assigned to the 3rd at the time of the incident.]

During the 1990s, this station was the home of the Detroit Police Gang Squad, on the second floor. A paper found there by Ed Steele dates to 1996 and lists the names of known gangs in the city of Detroit at that time. This station was decommissioned in October of 2005.

The upstairs of most old-time police stations contains a gymnasium, because cops are (ostensibly) supposed to stay in shape, haha. When I was there, it was full of lockers:

Inside one of the lockers:

Looking out over the roof:

According to graphic maps in the The Detroit Free Press Detroit Almanac, during both the 1943 and 1967 riots the 6th Precinct remained just outside the area of the worst chaos, but it was by no means at peace either. There is a historic press photo on page 3 of Ed Steele's .pdf document that shows at least two helmeted Michigan National Guardsmen and two other men clutching rifles, crouching in defensive positions in the lobby of this barricaded police station during the 1967 Riot. Most of the worst battles with police were fought east of Grand River Avenue.

The masonry actually seems to be in relatively good condition for the most part:

This would have been the garage area, where the patrol cars were kept:

Graffiti in the drunk tank:

If you've ever been in holding before, you'd agree that this is actually a fairly luxurious setup they have here compared to other lockups:

Inside of a cell:

Found myself a souvenir!

Today the 6th and 8th Precincts have been combined into the "Northwestern District" and share a building at 11450 Warwick, which was the site of the incredible (even for Detroit) "Superman" attack by an apparently berzerk gunman in 2011: