Because the "next level" of hobby trespassing is to get a boat, I procured a small tin can for tooling around the Detroit River. On a hot summer's day I put my vessel into the swirling foam of Neptune's watery bosom, via the Delray boat launch. We figured that a short trip up the Rouge River would be advisable to safely test the SS Jane's little 15hp motor, seeing as it hadn't been on the water in several years. Once we had rounded the back of Zug Island and passed the swing bridge, we saw this juicy little morsel that none of us had ever noticed before:

It lies way far back from the nearest road, Jefferson Avenue, so most landlubbers have probably never even seen this building before. 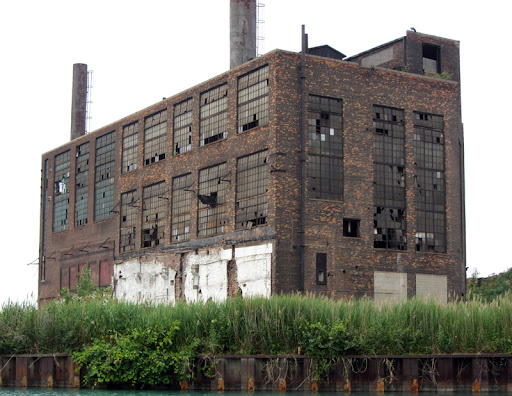 Swinging our craft around behind a bend in the seawall, we moored up to an old cleat and climbed up onto land, carefully looking around for any signs of security. Seeing none, we made our way into the old powerplant. 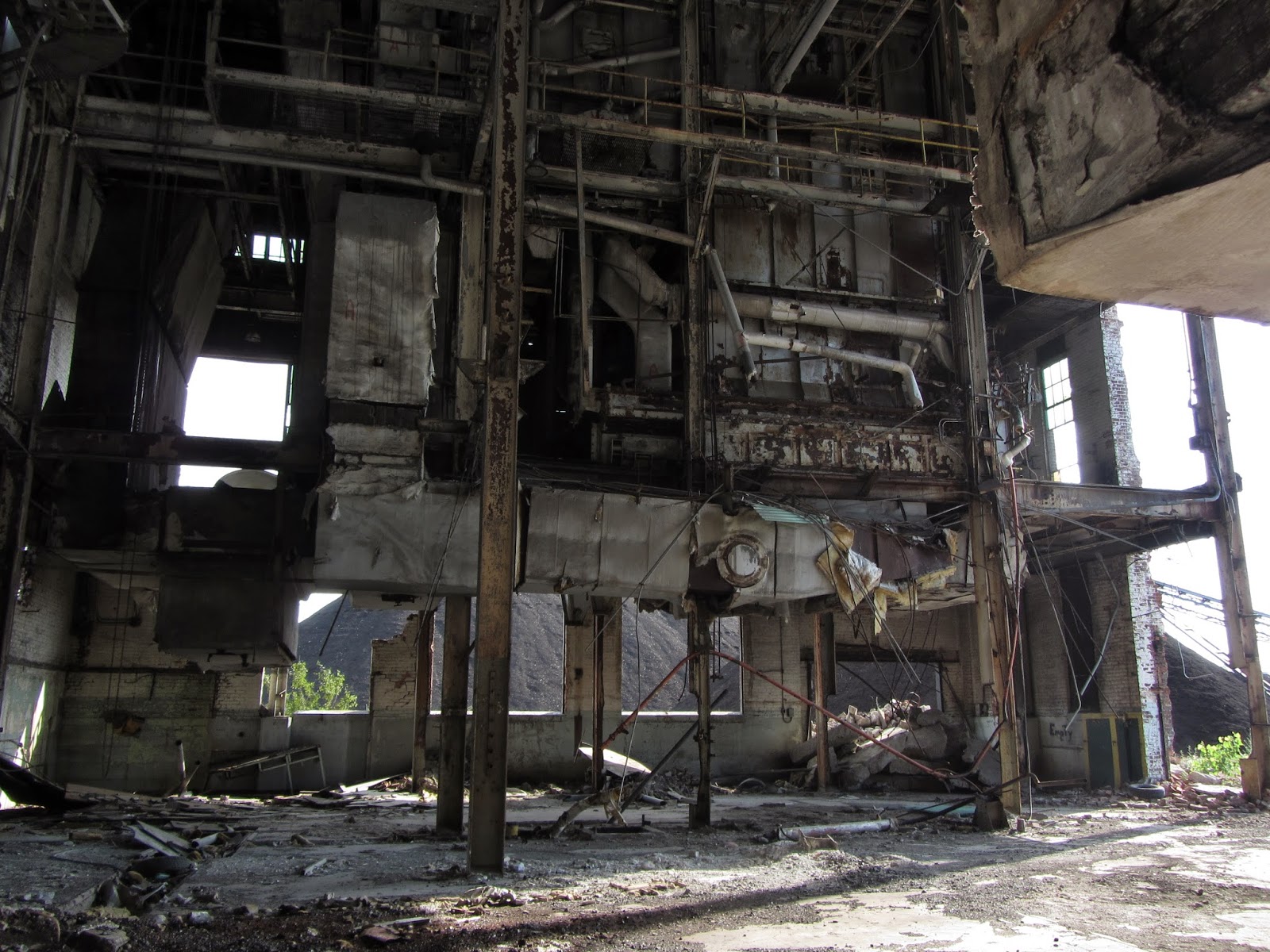 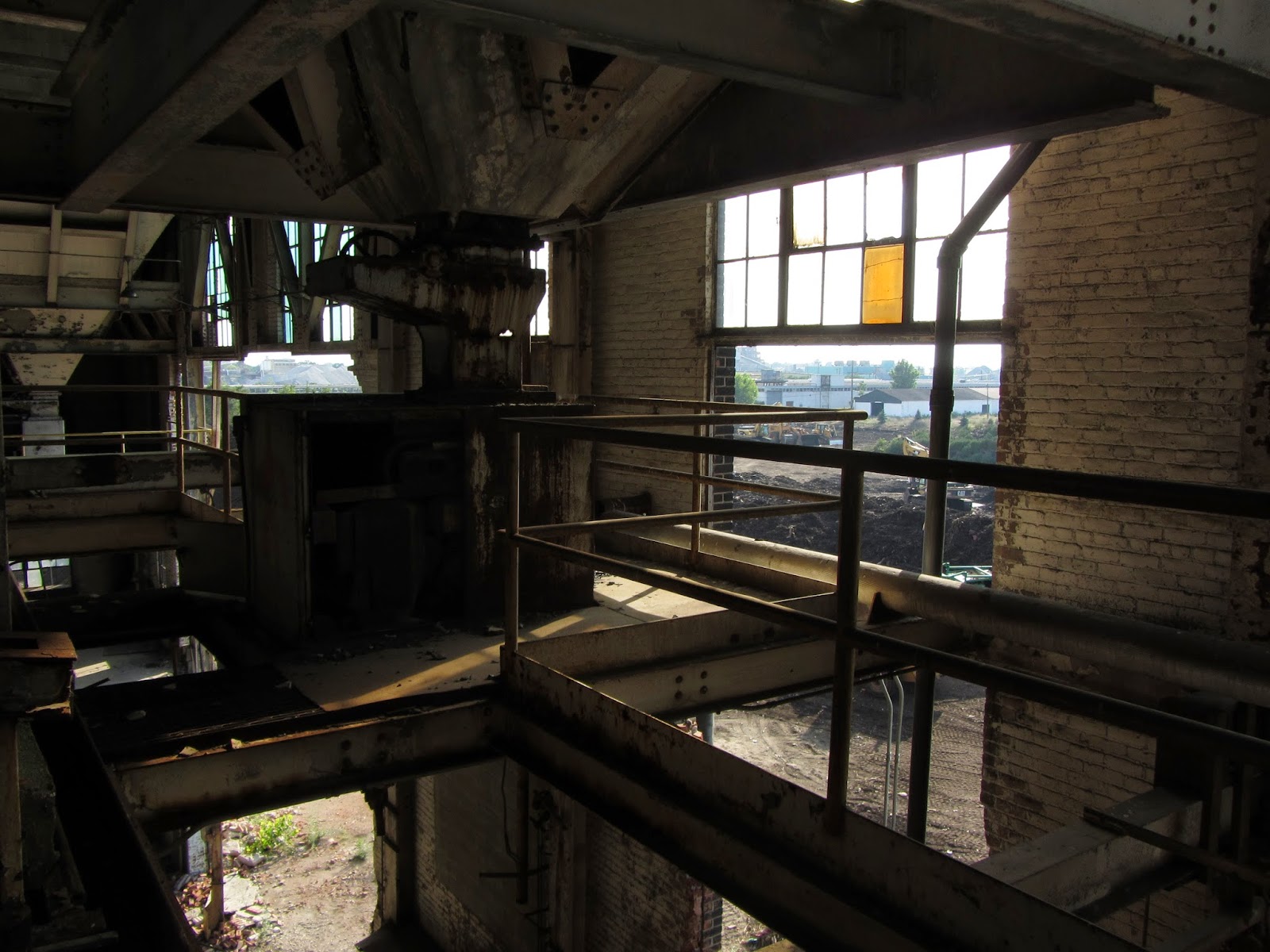 I have also seen the address of this plant listed as 9125 West Jefferson Avenue. Up until very recently, if you looked at Bing Bird's-Eye or Google Maps, it still showed imagery of the rest of the plant prior to being torn down. 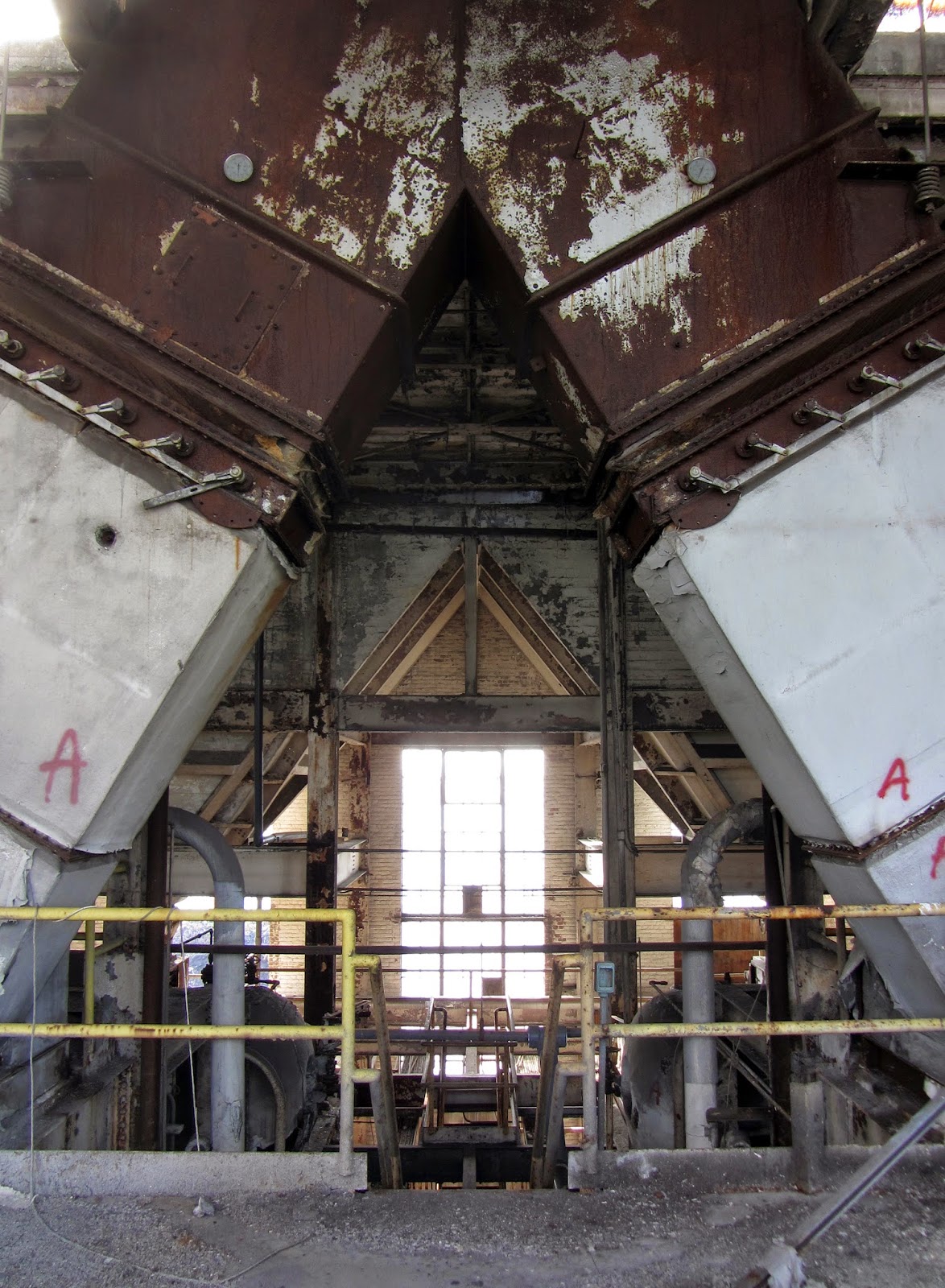 Historic photos in the Detroit Public Library's Burton Collection indicate that the company was operating as early as 1899. A paper by Marygrove College historian Tom Klug also explains that the company employed many Hungarians, who began immigrating to Detroit (especially the Delray area) around 1896. 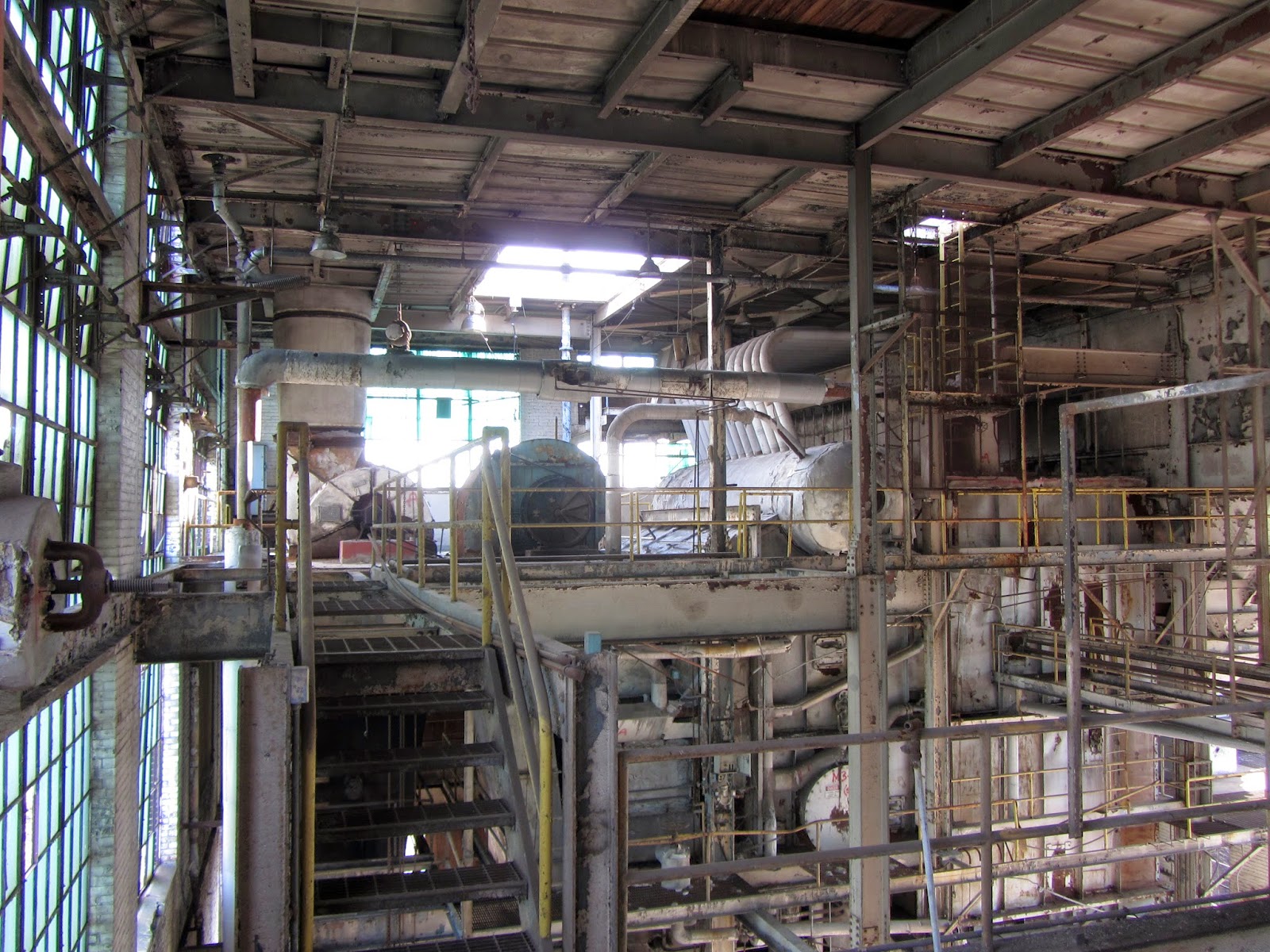 In 1954, Scott Paper acquired Detroit Sulphite Pulp & Paper Co. At that time, they made waxing stock and other papers. 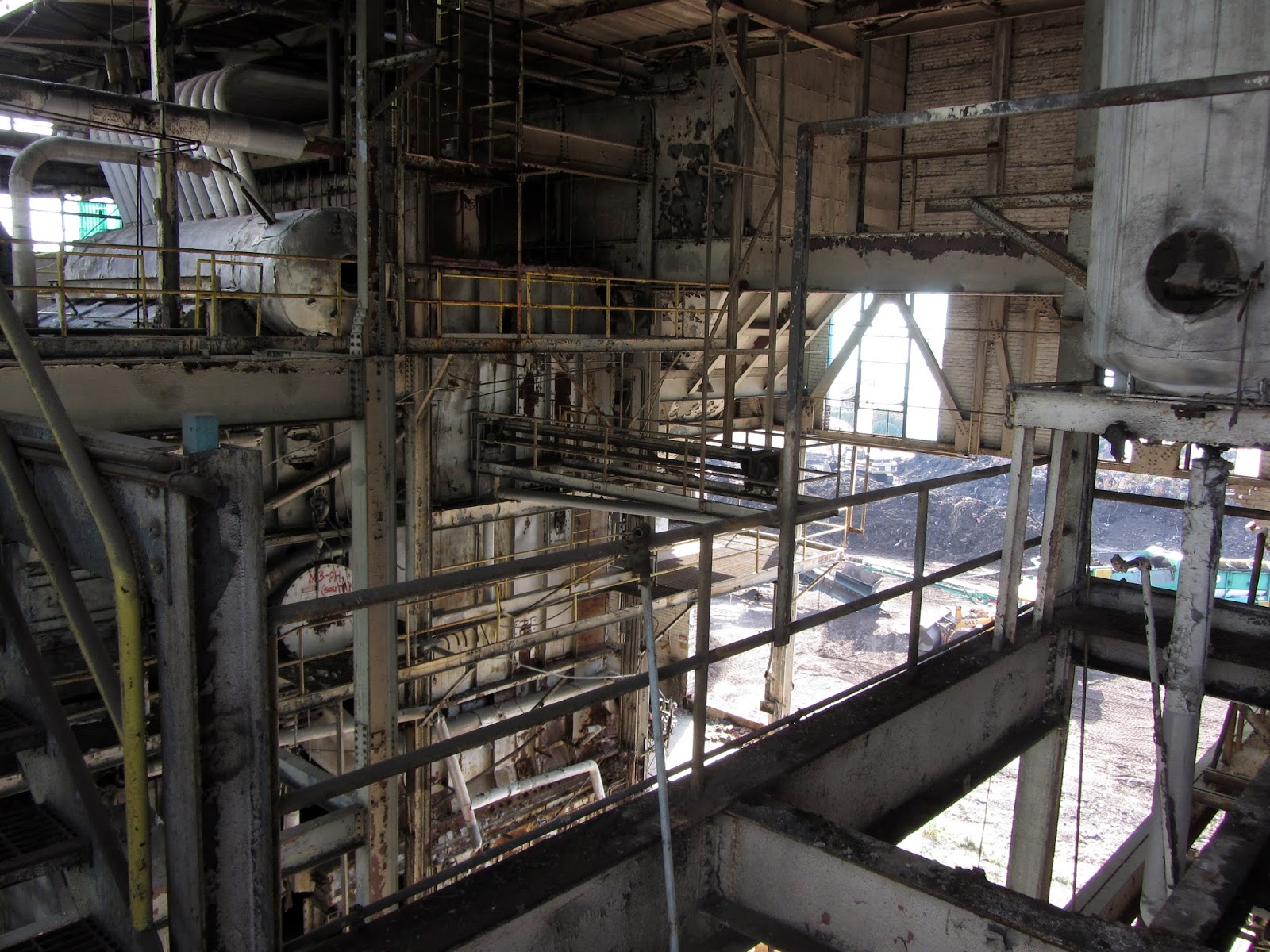 Though Michigan's (and indeed a great portion of the nation's) paper industry was centered in Kalamazoo, there were still a handful of paper-related companies in southwestern Detroit, such as Chope-Sievens, and Detroit Tullar Envelope. 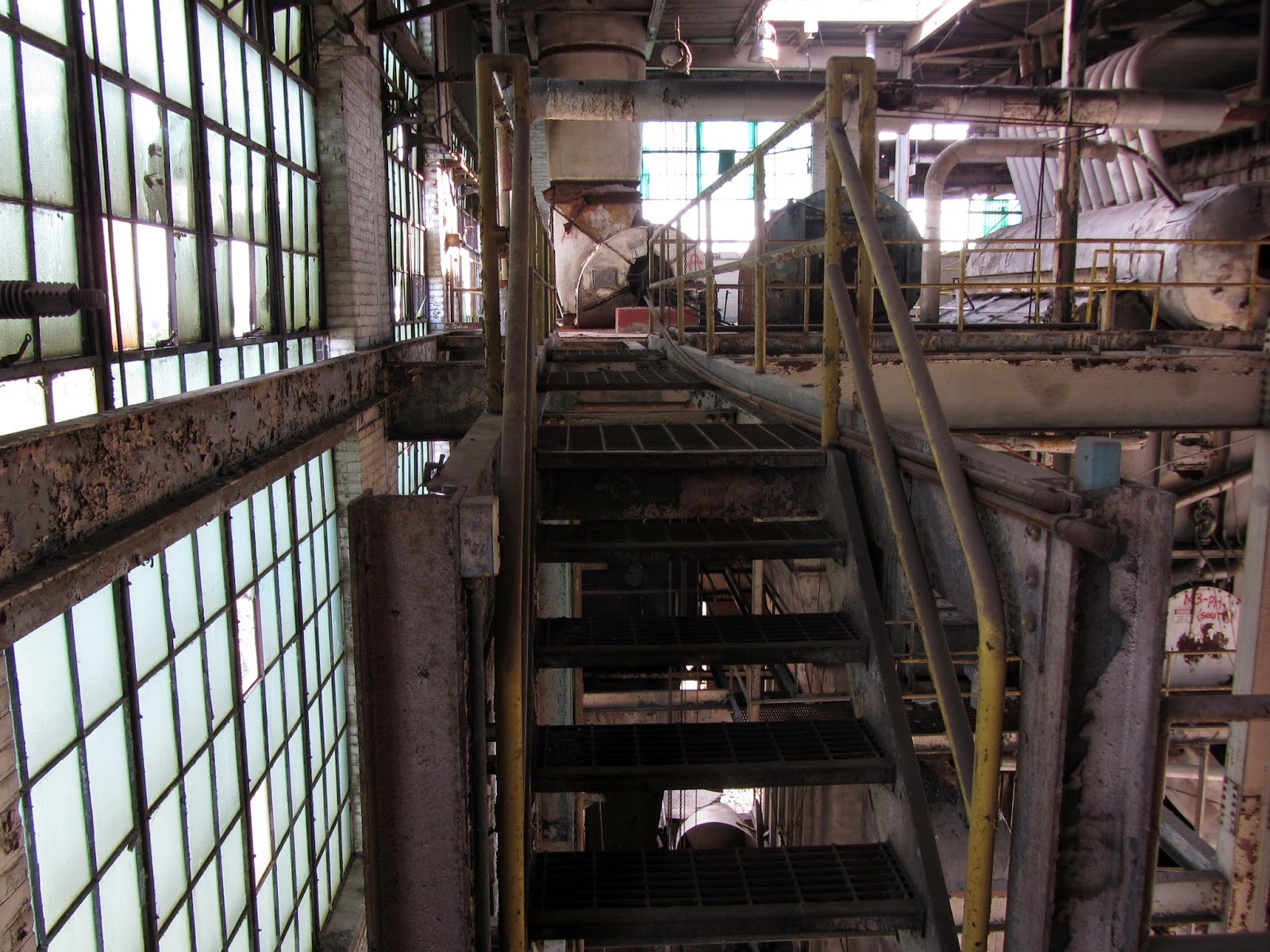 This building was actually fairly hard to get around in...a lot of the metal (including all staircases and steps) had been torn out of the lower level of the structure, making going upward virtually impossible except by climbing a couple sketchy ladders that had apparently been left by scrappers. But again, since this site is essentially impossible to access from the road, the scrappers must have come by....boat? 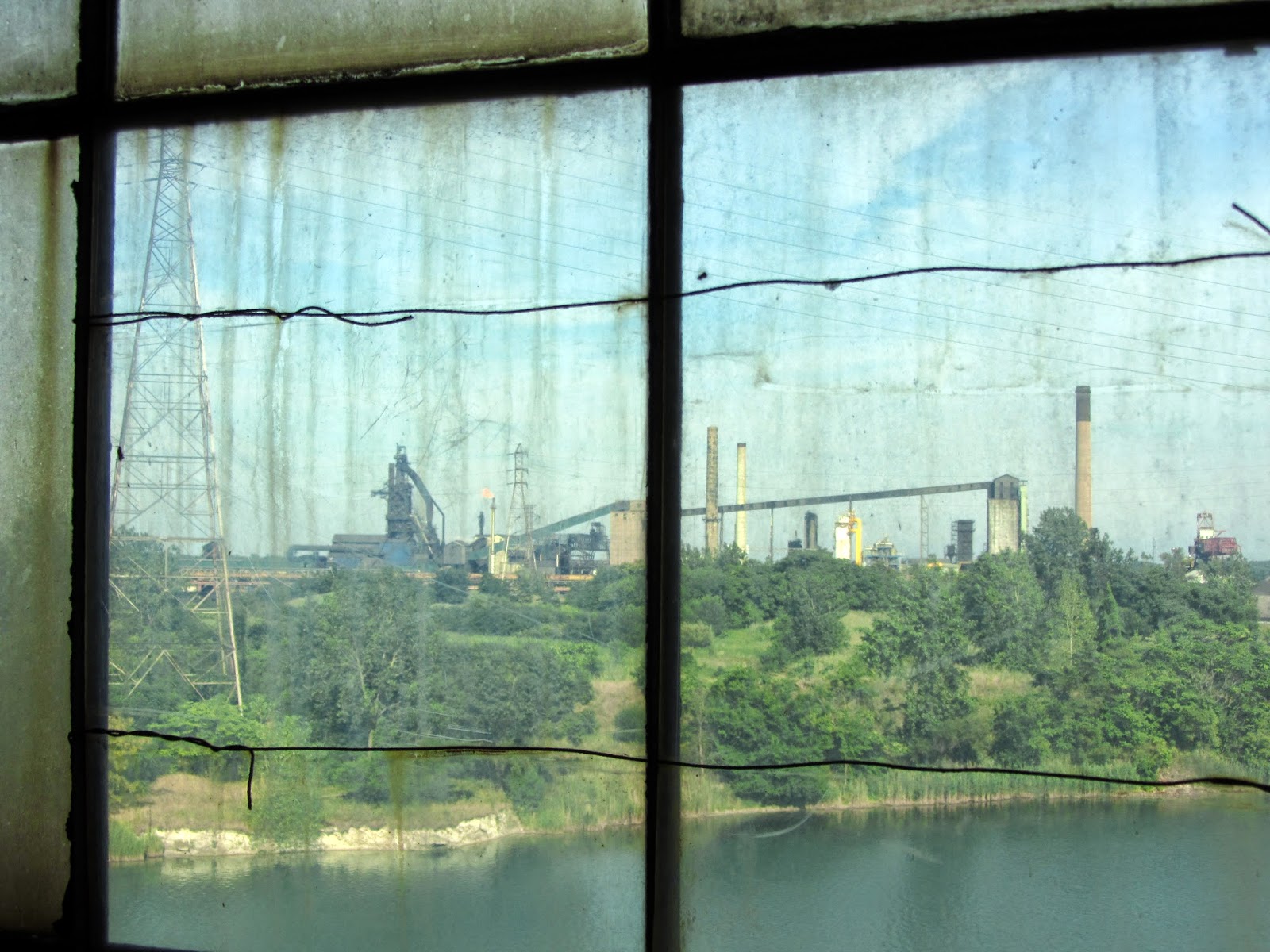 Amphibious scrapping: only in Detroit. I guarantee you this. 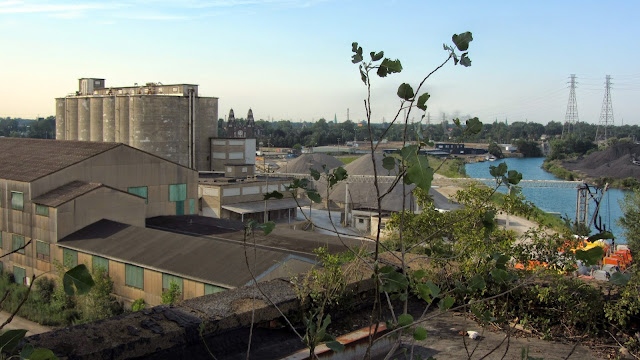 Anyway, even the ladders only gave access to the second level or so of boiler catwalks, so beyond that it was a game of shimmying up stair-less staircases and balance-beaming on supports where steel platform grates had been removed. 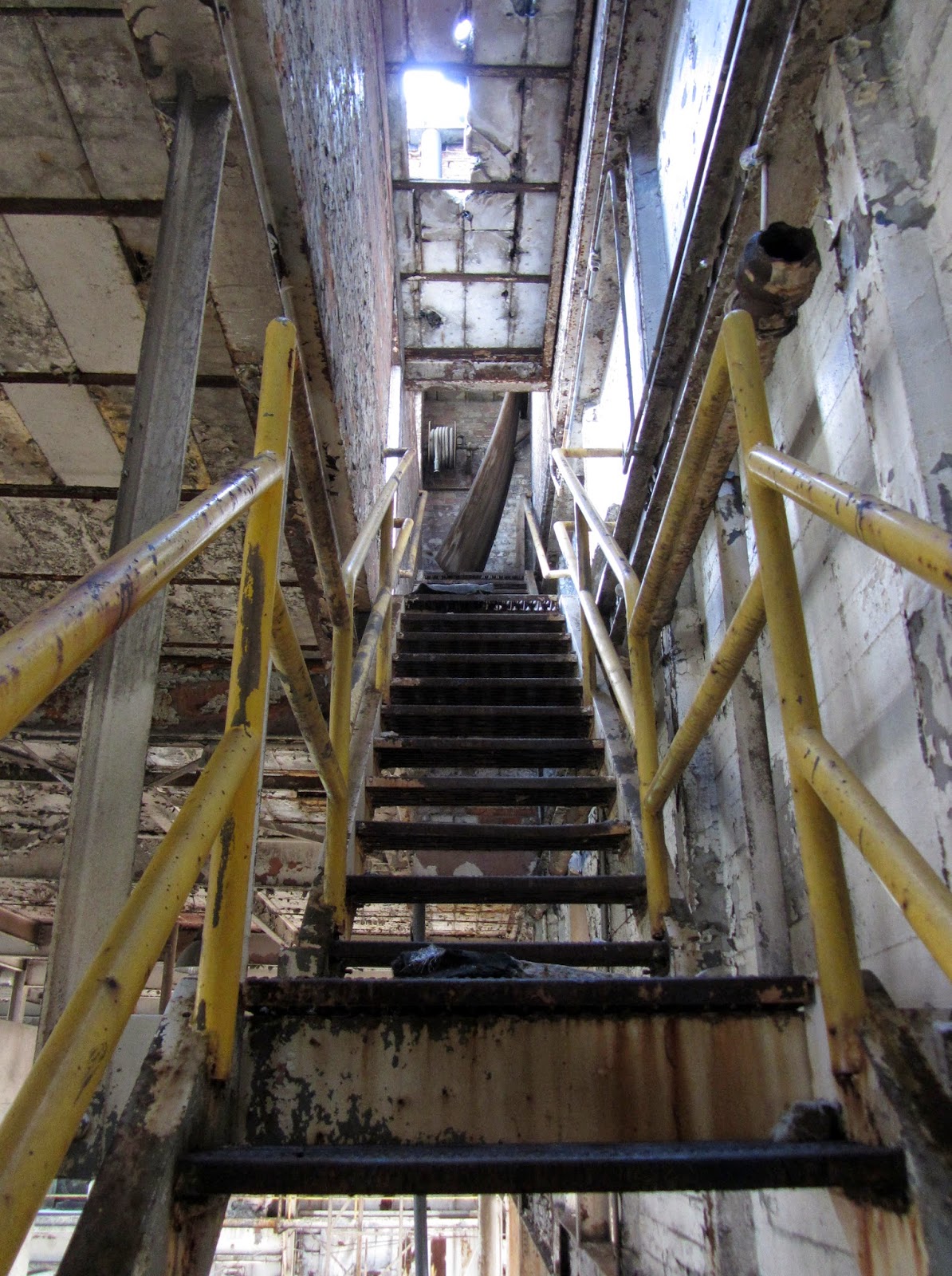 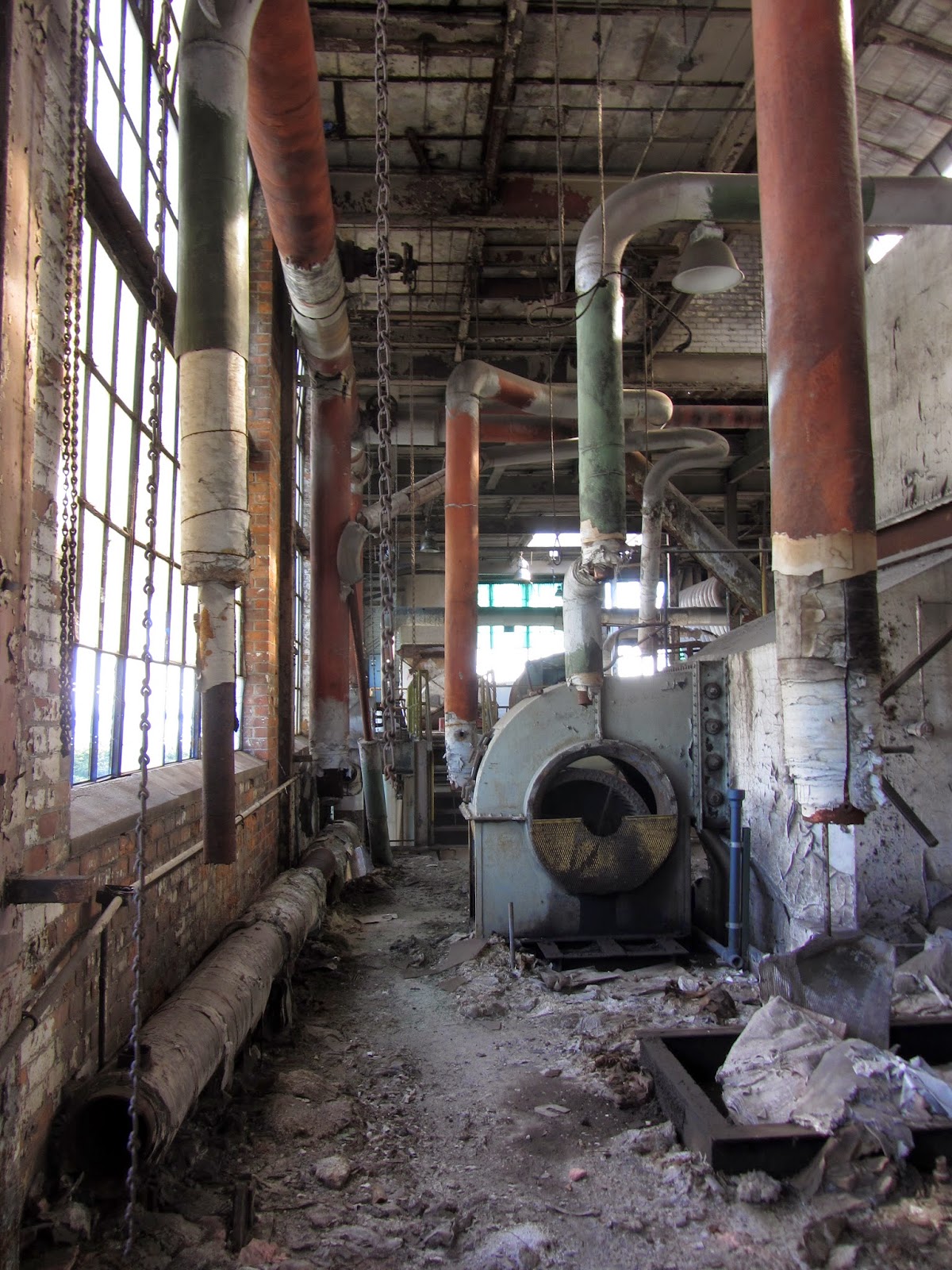 There was still a hell of a lot of metal left in this place, and you can tell by the complete lack of graffiti just how off the beaten path it is: 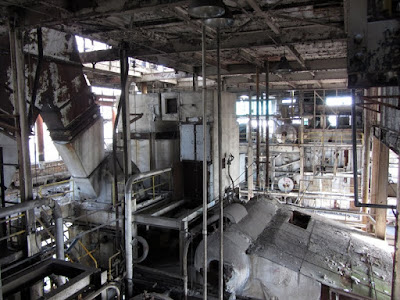 Sorry, I don't do HDR photos: 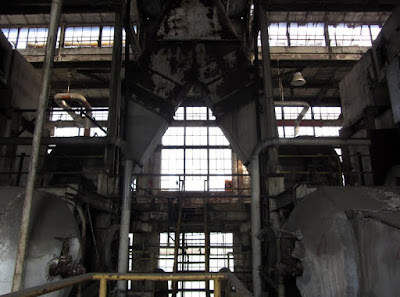 Making it to the roof was an accomplishment in itself, rewarded by a fairly unique view of the city. 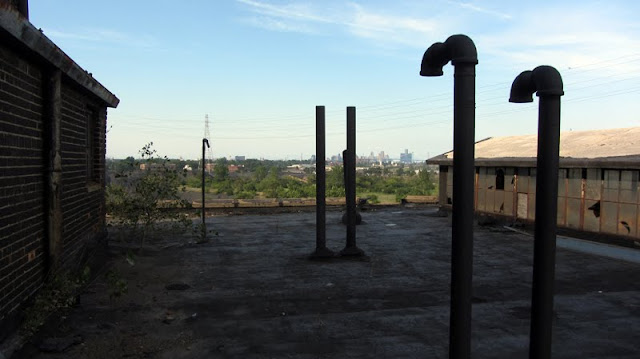 This roof would've been great for nighttime chilling and slinging back the brewskis, but the hassle of having to come and go by water would make it almost prohibitive. Not to mention the circus climbing act to get up here. 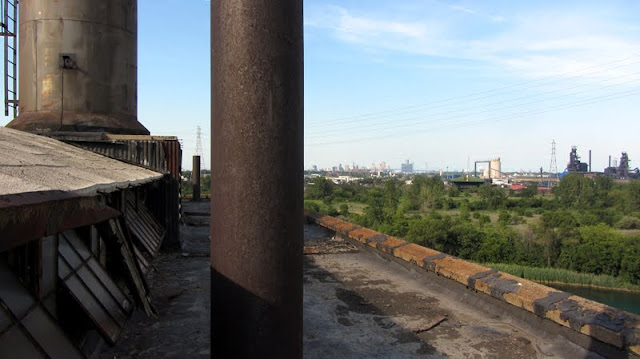 This building wasn't going to be around much longer anyway. It was demolished sometime prior to June 2014. 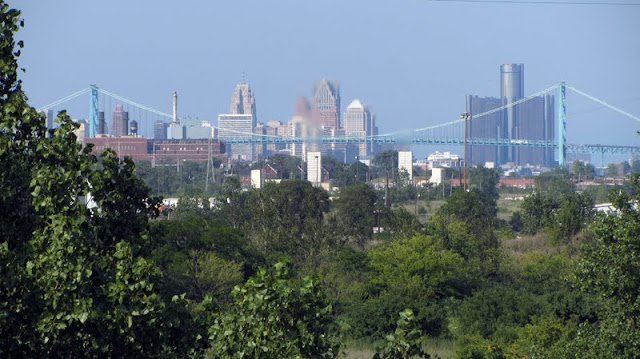 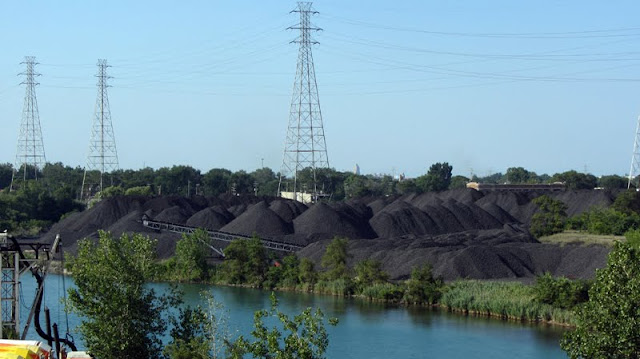 Contrary to what one might think, Zug Island is actually mostly empty space: 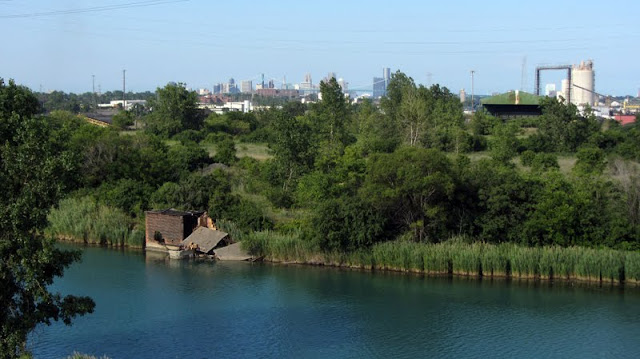 I explored that small structure on Zug Island in the second half of a different post. 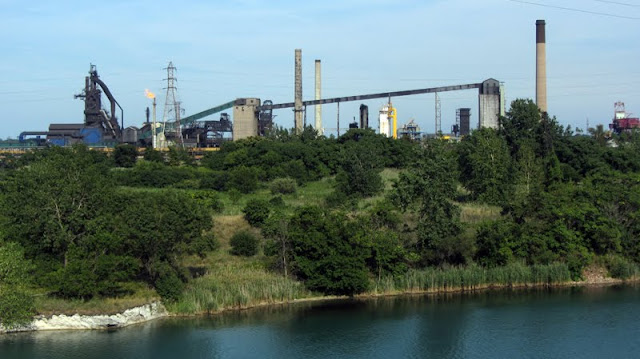 
References:
http://www.cms.kimberly-clark.com/umbracoimages/UmbracoFileMedia/K-C_Timeline_umbracoFile.pdf
The City of Detroit Michigan 1701-1922, by Clarence M. Burton, pg. 609
https://digitalcollections.detroitpubliclibrary.org/islandora/search/catch_all_fields_mt%3A%28Detroit%20Sulphite%20Pulp%20%26%20Paper%29%20OR%20catch_all_fields_et%3A%28Detroit%20Sulphite%20Pulp%20%26%20Paper%29
Railway Cars, Bricks, and Salt: The Industrial History of Southwest Detroit before the Auto, by Tom Klug