On the east side there are two old brick smokestacks sticking up near Wayne County Community College that serve as landmarks to anyone in the Gratiot / Conner / I-94 area. They belonged to the old Federal-Mogul Forge at 11031 Shoemaker, a plant that iconic American author Jack Kerouac once claimed employment at. 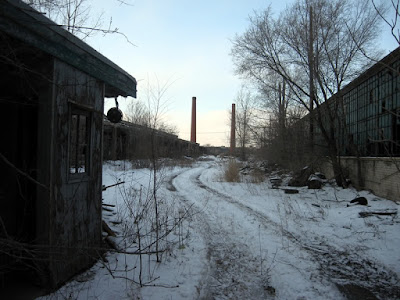 The interior of this building made me think of a better-preserved version of the Kelsey-Hayes Wheel Plant: 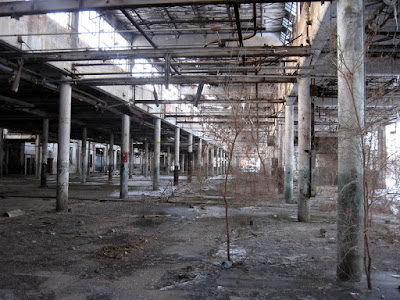 The Federal-Mogul Corporation was founded in Detroit in 1899 by J. Howard Muzzy and Edward F. Lyon as the Muzzy-Lyon Co. According to its own company webpage history timeline, the partners sold "mill supplies and rubber goods," but they also set up an early subsidiary called the Mogul Metal Co., under which they began to revolutionize the engine bearing industry. 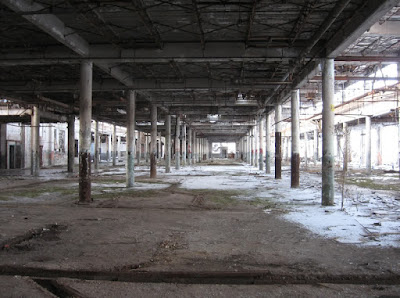 Mogul Metal Co. started developing specialized metals to meet different bearing needs, and they were pioneered die-casting replacement bearings to the right size and shape. Prior to that development, old used bearings had to be gouged out of the motor block and new metal poured in. 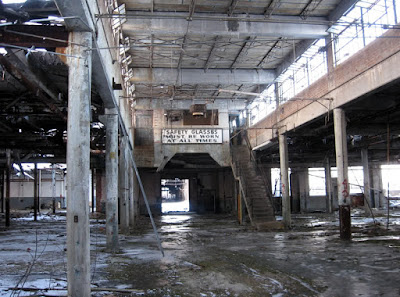 In 1924 the Mogul Metal Co. merged with Federal Bearing and Bushing, a manufacturer of engine bearings and bushings, at which time the Federal-Mogul Corporation was officially born; this plant was opened one year later, in 1925. According to the book Who Really Made Your Car? by Thomas H. Klier and James M. Rubenstein, Federal Bearing was originally founded in 1915 by a group of Detroit businessmen who bought up the assets of a defunct brass and aluminum foundry. 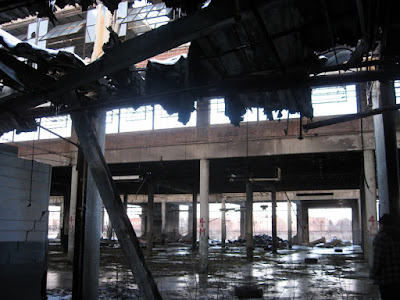 Today, Federal-Mogul has become one of the two main engine parts suppliers in the world (the other is Eaton); their product catalogue includes an entire array of replaceable engine and transmission parts, such as pistons, wrist pins, connecting rods, valve seats and guides, and of course bearings of all types. 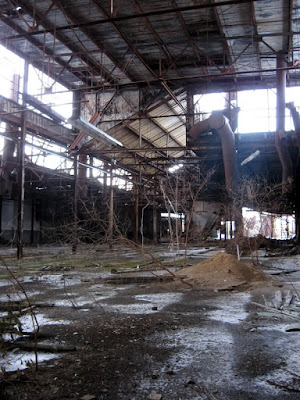 Federal-Mogul's innovations continued throughout their history; in 1931, they introduced "Equi-Poise" boat propellers, and formed a marine division. A year later they developed a new alloy called C-100, which was the first new bearing material since the discovery of Babbitt metal. 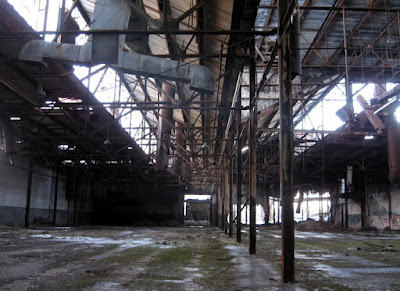 By the way, "Mogul" was an alloy of tin, antimony, and copper, based on a process patented by Isaac Babbitt in 1839 to prevent rotating metallic shafts from overheating and wearing out. Mogul metal was made via a trademarked "secret" process, according to Klier and Rubenstein. You laugh, but industrial espionage and technology theft were and are a very real thing in Detroit's automotive design and manufacturing business. 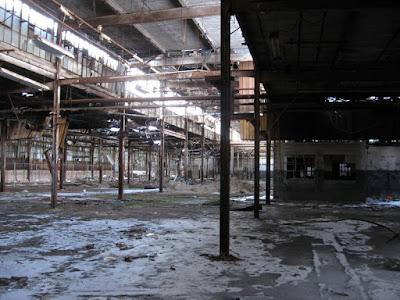 In 1934 Federal-Mogul’s research staff came out with the new C-100 and C-50 alloys, developments that revolutionized the durability of bearings. They also began acquiring other suppliers, including: Douglas-Dahlin Co., U.S. Bearings Co., Watkins Manufacturing Co., Pacific Metal Bearing Co., Superior Bearings Co. and Watkins Rebabbitting of Canada. As mentioned in another post of mine, Federal-Mogul used some products made by the Detroit Gray Iron Foundry. I wonder if that was another supplier they eventually bought up as time went on? 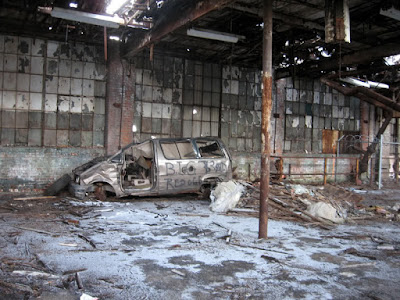 By 1941 Federal-Mogul had become the world’s largest manufacturer of motorboat propellers, and during WWII they of course switched over to wartime production. The Detroit Historical Society lists aircraft engine valves, cam rings, oil seal parts, and of course bearings and marine propellers among the items that Federal-Mogul produced for the military.

An article in the MetroTimes studying American writer Jack Kerouac's brief stint in Detroit notes that for a little while at least, Kerouac had worked in the office of this plant during the winter of 1944. Having been discharged from the Navy because of "indifferent character," his then-wife's father set him up with a job at Fruehauf Trailer, and he later got a job here working midnight to 8am, which he claimed was the "best job he ever had," probably because it allowed him to sit at a desk and read books on literary criticism. Another Detroit landmark that Kerouac also spent time at was the Hotel Savarine, which I explored in a different post. 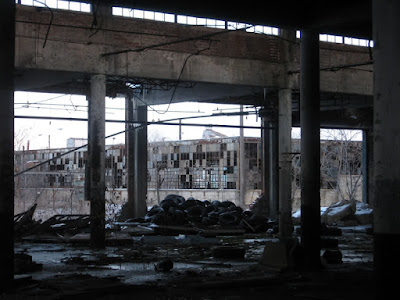 Two years after the Allied Victory over Japan, Federal-Mogul opened a new research facility in Ann Arbor, as total sales reached $85 million and their employee roll hit 6,200. They also had a service headquarters in Coldwater, Michigan. In 1966, Federal-Mogul relocated its corporate headquarters from downtown Detroit to the suburb of Southfield, but it continued to operate this foundry until at least 1971. 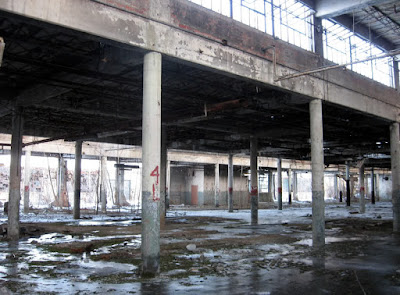 There was an overhead assembly-line-style parts conveyor still in place: 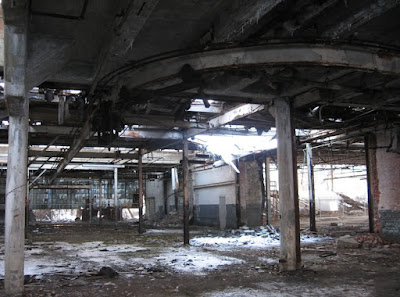 By 1997, Federal-Mogul supplied 90% of all engine bearings in North America according to Klier and Rubenstein, and 50% of all engine bearings worldwide, but went into Chapter 11 bankruptcy eventually, possibly due to making too many acquisitions of other suppliers. They emerged from bankruptcy in 2007, and as of January 2014 announced the move of their corporate headquarters back to downtown Detroit, to take up residence in the former Blue Cross buildings. 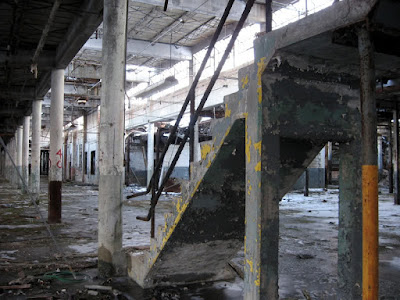 A Michigan DEQ report from December 2007 indicates that the site was contaminated because of the lead smelting that was done here in the foundry. The report says that the site was owned by Federal-Mogul from 1925 to 1971, by Aetna Metals in 1977, listed as vacant in 1978, as owned by Erwin Trucking and RPM Distributing in 1981, and "demolished" in 1998, though I imagine this refers only to the lead foundry. 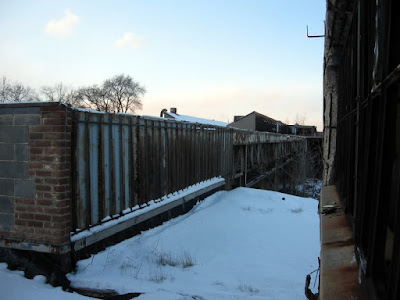 A lead foundry was located in the "central portion of the west building," and contained "approximately eight kettles and a furnace in a concrete floor depicted south in the babbitting room." This environmental report was mainly concerned with airborne dispersion of lead smelting residues from the site in dust form. As you can see, large parts of the plant have indeed been cleared away: 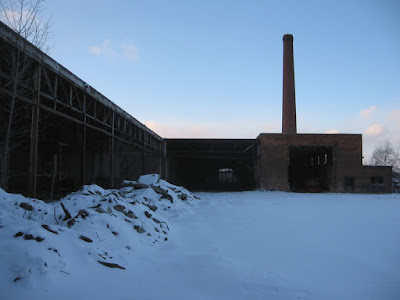 The EPA was also collecting soil samples from nearby homes as late as 2012 to determine the level of contamination spread. Their report indicated that there were also underground chemical storage tanks that posed a potential threat. 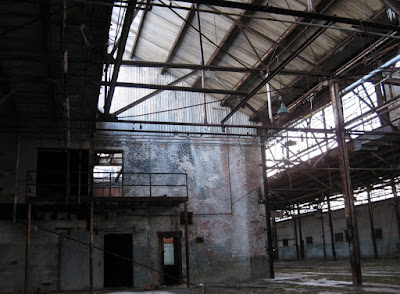 I found the barbwire fence erected on the inside of the plant to be rather suspicious... 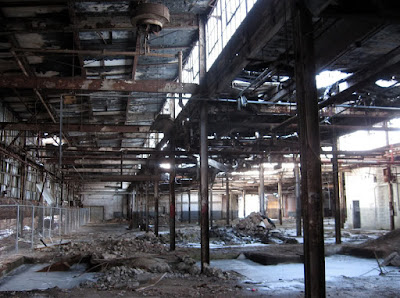 And there was no graffiti to be seen anywhere. 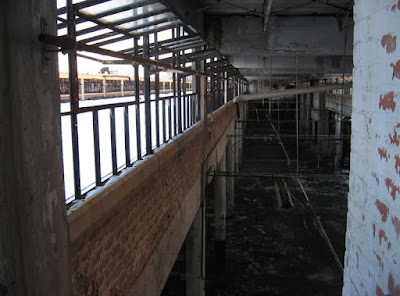 The presence of several recently-chopped cars was another warning flag... 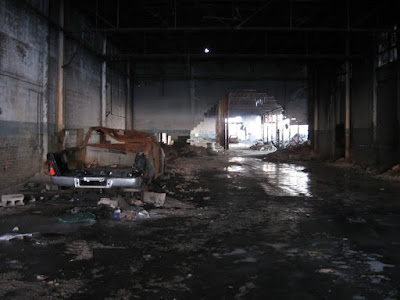 It was definitely an "active" site judging by the number of recently abandoned cars and fresh tire tracks in the snow, but I was also getting the stray dog jitters. Those bastards get hungry in the winter. 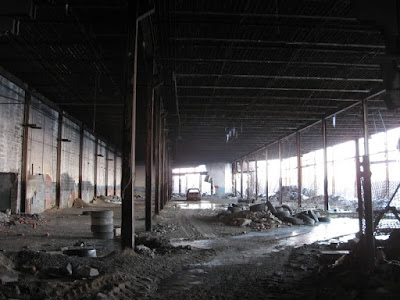 I'm sure that Kerouac would have referred to this scene as "beat, man." 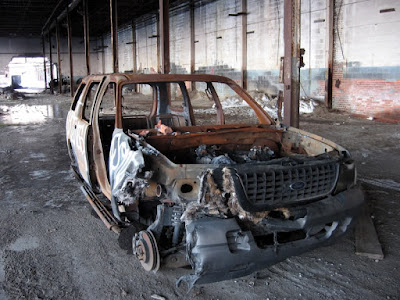 Dumping used tires is another important use for Detroit buildings: 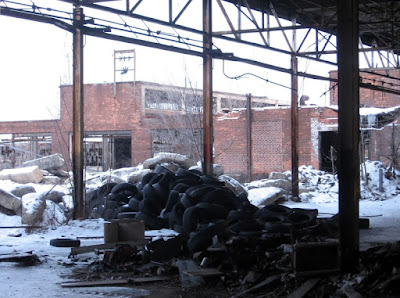 As of 2015, this plant looks to have been mostly demolished except for the concrete structures. 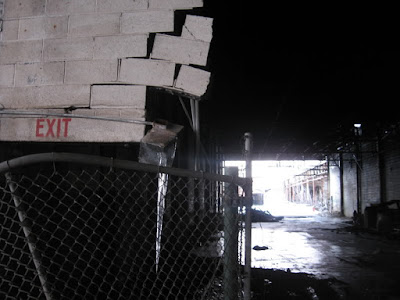 References:
Who Really Made Your Car? Restructuring and Geographic Change in the Auto Industry, by Thomas H. Klier and James M. Rubenstein
http://www.michigan.gov/documents/deq/deq-rrd-DS-11031ShoemakerStreetSitePhaseISummaryReport_282681_7.pdf
http://www.federalmogul.com/en-US/Company/Pages/History.aspx#.U86v9BZhPwI
http://www.crainsdetroit.com/article/20140126/NEWS/301269982/federal-mogul-to-move-into-former-blue-cross-buildings
http://www.epa.gov/Region5/cleanup/federalmogul/pdfs/federalmogul_polrep_3.pdf
"Winter of His Discontent," Metro Times, January 20, 2010, by John Cohassey