The Ferguson Building at 1448 Woodward was erected in 1896 by the estate of Mr. Eralsey Ferguson and designed by Mortimer L. Smith & Son, Architect. It was a speculative commercial building that would house a variety of tenants, including architects, dentists, insurance agents, a dressmaker, doctors, and a photographer. In 1898, the Ferguson became the Detroit City Gas Co.'s headquarters. In 1912, the building was updated with an entirely new "terra-cotta and brick front," which remains today.

It's the reddish one seen here in the middle:

For awhile we had a Canadian buddy who lived on the third floor of the Ferguson, and sometimes when we would visit at night it was fun to sneak up on the roof to watch the mayhem ensue as Club Bleu a few doors up the street would let out at night, often erupting into street brawls with the Detroit Police Gang Squad. Club Bleu was notorious for this—at least back then. I'm not up on the downtown scene these days but I suspect that these sorts of shenanigans aren't tolerated in today's much more *conservative* downtown milieu, heh.

Hanging out on the roof of the Ferguson offered plenty of other benefits, such as nice views of surrounding buildings. 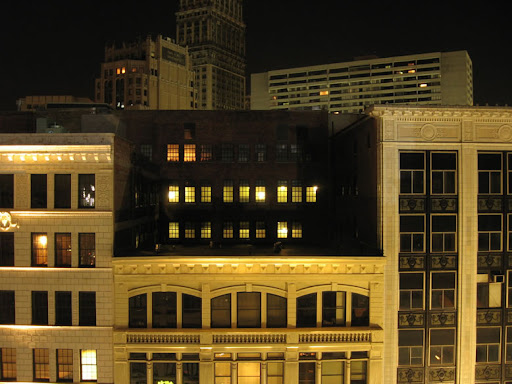 The Ferguson Building was heavily modified again in 1914 by the Henry Blackwell Co., adding a magnificent arcade entrance and a 40-foot-long show window. Said to be the largest window in the state, it was located between the two doors.

I guess being the owner of Michigan's longest shop windows was too much of a burden, because Henry Blackwell Co. went bankrupt in 1916...possibly with help from rock-throwing miscreants who couldn't resist the temptation of so much glass. Many other upscale tenants leased the building before it was occupied in 1956 by Winkelman's, a women's clothier who remained until 1987.

Disaster struck on June 24, 1958, when an 18-foot section of the masonry cornice of the Ferguson Building fell to the sidewalk killing 79-year-old Mrs. Myrtle Taggart, and injuring two bystanders. Rusted support rods were blamed for the collapse. Incidentally, our visit was exactly one year and one day short of the 50th anniversary of this tragedy.

Anyway, Mrs. Myrtle's death prompted Mayor Miriani to order the immediate "removal of any dangerous gingerbread" from buildings. This crusade started with the issuance of 1,663 cornice violation notices, resulting in perhaps the single greatest butchery of original vintage architecture in Detroit's history, as over two-thirds of the buildings on Woodward simply removed their cornice that year rather than try bringing them up to code. There were notable exceptions however, such as Hudson's store, the Detroit Life Building, Michigan Central Station, and the Woodward Building directly across the street from us, whose cornice remains intact today:

It would appear that the fact that Myrtle Taggart's name rhymes with a famous country singer's was not the only unnerving thing about her; now she haunts the sidewalk in front of 1448 Woodward, accusatively shaking her finger skyward as if to warn, or scold. There is also 440 Lafayette, which seems to have suffered some battle damage that never healed.

The D.J. Healy Building next-door actually went as far as to streamline the bald stub where its cornice had been with sleek, fluted, brushed-aluminum trim:

The D.J. Healy Co. Building at 1426 Woodward was built in 1910. Daniel J. Healy was a merchant who specialized as a dealer in ostrich feathers and other dry goods, starting in 1887.

The Chicago architects Postle & Mahler designed the Healy Building, influenced by Louis Sullivan's Gage Building. The authors of the Lower Woodward Avenue Historic District Report feel that the Healy Building has "suffered renovations and misguided improvements, perhaps to the greatest extent of any building on Woodward." The first three stories were bricked over for signage. Fortunately, the original terra cotta and window frames remain behind the unsightly surface covering. The building's intricate foliated metal marquee was removed in 1941. The cornice was of course removed in 1958 and replaced with the fluted aluminum trim you see here.

The D. J. Healy Company closed its Woodward store in 1962, although it kept its branch stores in suburban Grosse Pointe and Birmingham operating. The building had been vacant since Marianne's closed in 1995 but was being converted into residential lofts in 2007.

Next, we were able to hop over to the roof of the "Oslo" Building on the corner of John R, with a modicum of climbing and scrambling on wobbly old chairs or ladders, or whatever we had lying around up there:

Actually, the true name of this building at 1456 Woodward is the Kaiser-Blair Building, though most people call it "Oslo" because of the snobbish sushi place that used to be there. You'll recognize it by its tall white columns:

The Kaiser-Blair was originally built as a four-story building in 1916, and received a four-story addition in 1923. It was designed by Richard Raseman (the same guy who designed the Harmonie Club). The design of the fifth and sixth floors was coordinated with the first four, with matching Chicago-style windows. After Mrs. Taggart's death, the cornice was removed from this building as well.

The original tenant was Kaiser-Blair Clothing. In 1933 the storefront was renovated for Cunningham Drugs. Other tenants included a dentist, a tap dancing and piano school, and a beauty salon. Through the 1940s and '50s, a Marianne's store was located in the building with signage for HOUSEHOLD FINANCE, LOANS on the second floor.

In the 1970s Rose Jewelers, then Zales Jewelers were the building's main tenants, and the second floor was the Tall Girls Shop. The Detroit furniture chain House of Denmark was located on the second through eighth floors, from 1969 to 1974.

Across the street can be seen Schwankovsky's Temple of Music (aka, Wright-Kay Building), designed by Gordon W. Lloyd, 1891:

The building contained "salesrooms, offices, a musical instrument department, piano show-rooms, musical studios, and rooms for tuning and repairing instruments." On the second floor was a 425-seat concert hall, set up with theater chairs. Outdoor brass band concerts were given from the sixth floor balcony...behind which is seen the vacant Grinnell Bros. Music Building:

By 1910 the F.J. Schwankovsky Co. had ceased, and the building was then filled by the Wright-Kay Jewelry Company store from 1920 to 1978.

The Metropolitan Building looms nearby: 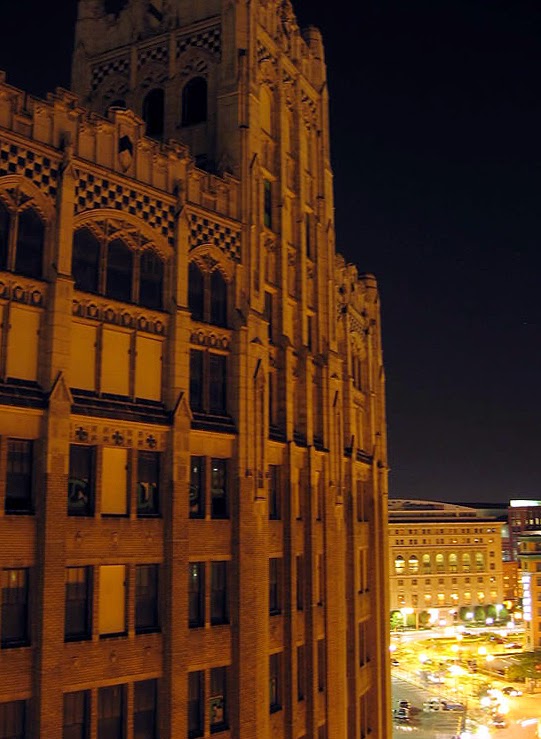