Penny for Your Thoughts?

Naturally, an open invitation such as this cannot really be ignored:

With the whole side of this swanky 1920s art-deco plant completely laid open, I walked in to have a look.

It looked like a renovation was set to begin, and indeed that was the case, though it would be several more years before it actually came to fruition. Today this building is fully renovated and occupied.

According to The City of Detroit, Michigan, 1701-1922, Volume 4 by Clarence Monroe Burton, the Caille Motor Co., or "Caille Perfection Motor Co.," was located at 6210 Second Avenue and made early outboard motors for small boats. It started in Saginaw under Mr. Auguste A. Caille (company president and general manager), and moved here to Detroit in 1895.

Attached to the more modern 1920s part of this structure was an old wooden-framed mill-style building, probably dating to the 1895 move of Caille Motors from Saginaw. However, the Compendium of History and Biography of The City of Detroit and Wayne County says that the original Caille factory in Detroit was located at Woodward & Baltimore; the move to this building at Second & Amsterdam didn't come until 1904.

The book Detroit's New Center, by Randall Fogelman says that this building was built in several phases, from 1900 to 1930.

Eerily, while researching for this post I came across the following c.1922 ad from the trade publication Motor Boat, Vol. 19, which seems to show the exact same location and angle as my previous shot above, only with a lot more stuff in the way: 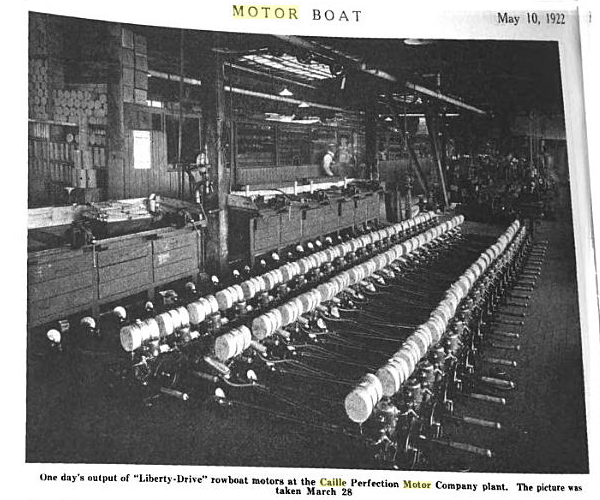 Next door was Cadillac Motor Co.'s 450 Amsterdam St. Plant (one of their first production facilities, built 1905, designed by Detroit architect George Mason), which you can see through the windows here:

The famous Burroughs Adding Machine Co. also had their plant in this immediate vicinity, a firm recognized for its contributions to the birth of computing.

Another important Detroiter was affiliated with this company according to Clarence Burton, a Mr. Richard  E. Kraetke. Kraetke started at the Detroit Lubricator Co. where he worked his way up to general plant foreman, before quitting to organize the bicycle manufacturing Scherer Co.

Still later Mr. Kraetke subsequently worked for the Rapid Motor Vehicle Co., then General Motors, and finally Caille Bros., of which he was made superintendent. He stayed here for 10 years before going on to organize Kraetke Bros. Co., celebrated tool makers in the city who were known for designing all the tooling for Lincoln Motor Co. during WWI, as well as jigs, fixtures, etc.

It's the footings of what used to be a bridge over the alley, connecting the north face of the plant to a railroad siding of the Grand Trunk line. I'm guessing it would've been used to load products or parts to and from the plant.

The alley itself seems to be a ramp, and I know that the Cadillac Motors plant next-door had ramps there for their own use that would be used to deliver finished cars onto trains. These 1920s-vintage ramps still exist, but are overgrown. The tall building in the distance is the Argonaut Building, part of the old GM headquarters complex.

Various ads in old catalogues show the address of this plant to be either 1523 Caille Street or "51 Caille Building;" 1300-1360 Second Avenue are the other addresses often listed, though they precede the city-wide address renumbering that was done after the 1920 Census.

Old catalogues advertise the Caille motors as usually having five speeds, varying from 2 to 30 horsepower, and some models that could be operated in both forward and reverse directions.

One such 1922 ad proclaimed that "weeds can't stop it," nor will shallows, or sunken rocks or logs thwart the Caille Perfection; it was designed to automatically rise over obstacles so that you can drive your boat "anywhere it will float." With a lot of the islands in the Detroit River having weedy shallows and uncovering areas surrounding them (especially down near Grosse Ile), this would have made a Caille-equipped boat ideal for exploring such undeveloped areas, or for finding the best fishing spots.

According to Albert Nelson Marquis's The Book of Detroiters, in 1888 Auguste Caille (with the help of his brother) invented and patented "a new type of service for conveying cash in stores," and later invented "coin-slot devices which resulted in the establishment of penny arcades in the leading cities of the world." As a result Caille Bros. soon opened branch offices in New York, Chicago, and Paris. Auguste was also the president of the Casino Co., "builders and operators of penny arcades and popular price theaters which the company has established in various cities."

An exhaustive timeline of arcade history appears to show that the coin-op arcade machine was not in fact invented in Detroit, as even the ancient Greeks seem to have had one. Such coin-for-entertainment machines were entirely rare however until 1888, at which time they began to proliferate. The first one listed as having been built in Michigan was made by Ganss, Clarke & Dengler of Saginaw in 1889. Other Michigan makers with machines on the timeline include Ansalem G. Hart (Detroit, 1891), Acme Novelty Works (Michigan, 1891), Columbian Novelty Co. (Saginaw, 1892), Eagle Mfg. Co. (Detroit, 1892), and the Grand Rapids Slot Machine Co. (Grand Rapids, 1984).

In 1908, the Caille Bros. plant employed "over 500 mechanics," making it the "largest plant in the world for the manufacture of coin controlled machines." The annual output averaged around 12,000 machines of 80 different types by the year 1909. Now it suddenly becomes more than just an idle factoid that they were located practically across the street from Burroughs Adding Machine Co. Here is a list of 223 different machines made under the Caille Bros. name:
http://www.arcade-museum.com/manuf_detail.php?manuf_id=222

The book Detroit's New Center also lists Auguste Arthur Caille as the "inventor of the penny slot machine," as well as being owner of several of Detroit's movie palaces at the time.

In 1940, the A.C. Novelty Co. was listed at this address. According to the International Arcade Museum, that company specialized in coin-operated machines. Gee, I wonder if the "A.C." part of their name happens to stand for "Auguste Caille"...?

The initials actually belonged to his brother Adolphe Caille, who founded A.C. Novelty Co. after the sale of the Caille Brothers Co. in 1936. There were at least two other companies with the word "Caille" in their name: the Caille-Richards Co. of Union City, Michigan, and the Caille-Schiemer Co. of Detroit...might this imply that there was a rift between the two Caille brothers at some point? Or that a son may have carried on the family legacy? 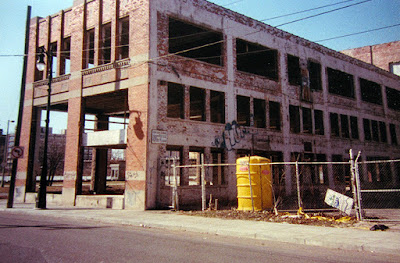 In later years, the building was occupied by Century Florist Supply, as shown in this photo from the DUCP, showing what the building looked like in 1976: 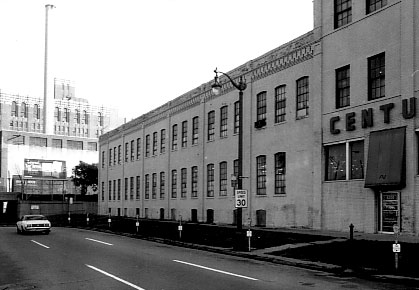 By 2010, the plant's conversion into residential space was completed.